Weird white growth - mold or something else?

I'm currently doing a series of beer-archaeological experiments trying to recreate an ancient Armenian beer mentioned by the Greek author Xenophon. One of the things I'm is trying to figure out is why this beer is described as having bits of grain floating in it; an idea I'm testing is whether the spent grain was left in so it could be used as a yeast starter for the next batch (I recently posted in a different thread on this).

Anyways, I started with pre-packaged yeast but have now switched to wild yeast. I brewed a batch, left it out on a sun porch in Illinois for 12 hrs in approx. 45 degrees F. The first weeks, the brew would get some fuzzy mold that I would scoop out. But now, three weeks into fermentation, the brew has these strange white geometric objects floating at the top that no longer looks like fuzzy mold. Does anyone know what this is? 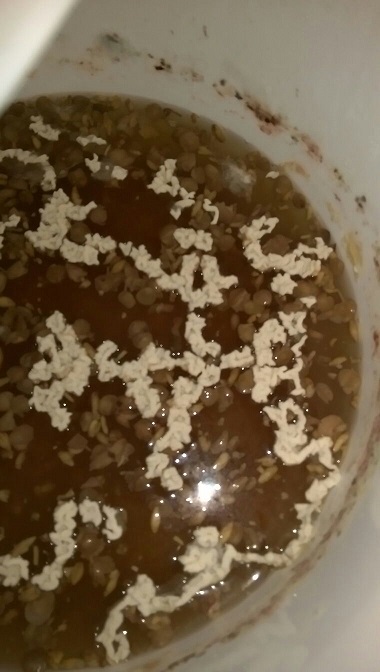 I may actually be a fungus. Mold will spread out and not build upon its self. Fungus, on the other hand, does and can do it quite rapidly. Honestly, yeast can do the same same thing though it tends to spread out a bit and then build on itself.
The only true way to tell is to get it under a microscope. even a kid microscope will work. Yeast and bacteria are very easy to identify as they are single cell structures. Mold will have more of a sponge looking texture.

That's very, very interesting! Posted same question in the Milk The Funk Facebook Group and most people there just tend to go with mold, so this is really helpful! Now I'm annoyed though that my microscope is in storage on the other side of the country... Will think about alternative ways of getting one though - thanks for your thoughts!

Just a quick correction. I meant to say Fungus will have a spongy texture, not mold. Bacteria and yeast bud when they multiply. So while you can have a very complex matrix they maintain their single cell appearance. Mold actually falls into that category too. Fungus on the other hand, grow from spores as individual entities so you get long and striated layers. Bottom line is it's very easy to tell if it's fungus. The other three are a little more tricky. If you do a quick google search with the images option you'll see what I mean.
Keep us posted. You got my nerdy science interest peaked.
A

Looks like the beginning of a pellicle to me. I have seen some pictures of Brettanomyces that looks like the texture of ramen noodles.

A yeast pellicle is normal for a wild beer. It is the yeast trying to form a barrier to keep oxygen out, similar to a vinegar mother, especially when there is a lot of headspace, which you have there. Looks like you have an interesting experiment there.

Hmmm. You know, I may have to with Aristotelian on that. That usually happens across the entire open surface but if you have isolated colonies that is what a "start" would look like. If it takes over the entire top then you know what you got there. Time will tell.
OP

Thanks guys! Some people over at the Milk The Funk Facebook group have been saying that even if this mysterious growth itself may not be harmful (for example if its pellicle), the fact that I had mold on the brew earlier means I should chuck it because toxins could have come in... Tasted fine though when I had a tiny sip. Will let it sit a bit longer though for science sake and will report back here before I chuck it!

BTW: Aristotelian, totally dig your username ;-). If you are interested in the experiment, I wrote a series of blog posts about it. You can find all the posts here under 2.

Don't know what it is but I've popped some zits that came out looking like that.
OP

So it's about two weeks after the previous picture. It seems a white noodle-like pellicle did form, but it is accompanied by a greyish growth. Can any of you confirm the white is indeed 'proper' pellicle and tell us what the grey is? Of course we will throw it away soon, but we felt like it was worth watching it grow to educate ourselves about pellicle and the mold and fungus risks in ancient beer production. Thanks! 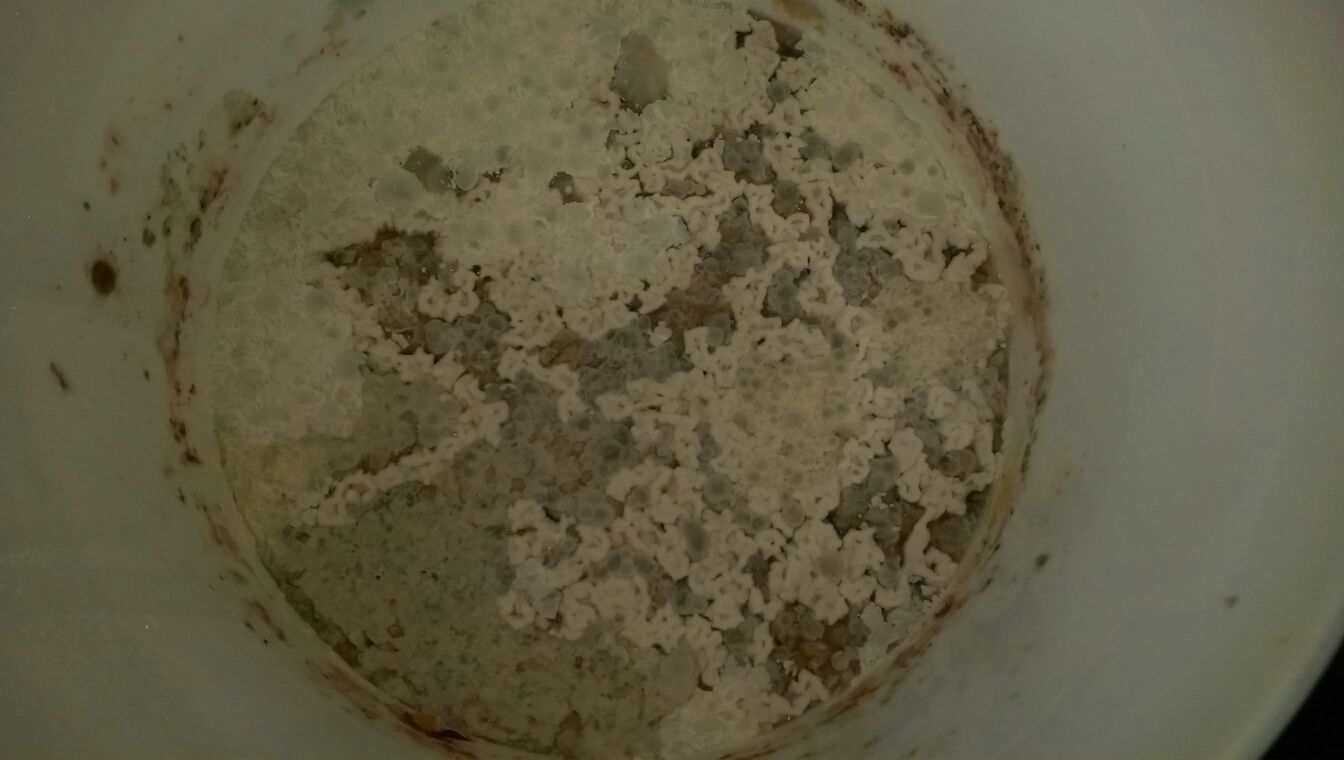 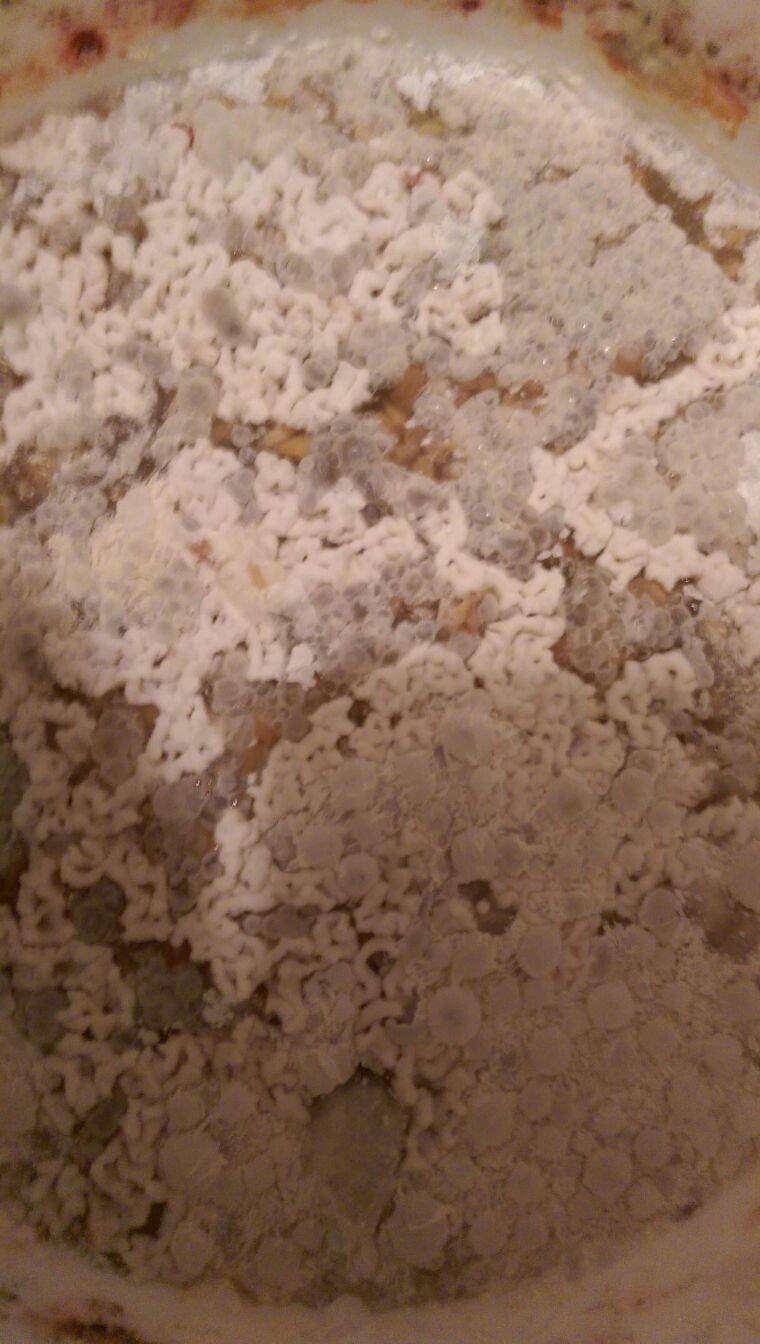 All I know is the first people in history that drank from under anything that resembled that must have been very thirsty.
OP

L
Mold, yeast or something else?

Chill Haze? Or something else?

Straining trub: whirlpool or something else?

S
Infection, wild yeast or something else?