Since moving to electric, I am now brewing inside. Its supposed to hit 95 F by this Saturday and thats pretty toasty with this humidity. Opposite side of the spectrum winters at its coldest get to -10 F some nights. So far brewing inside this summer, the wort smell SWMBO very much despises, and excess moisture in the basement is a no go. Thankfully running the dehumidifier helps a lot.

I was on FB marketplace and found THIS stainless hood. The guy told me it has no blower would need to purchase it separately. He runs a liquidator warehouse. He said a contractor sold it off as part of his assets from a job the client didn't want. He had 3 of them. He wanted $60 USD for it. I offered him $40 and he took it. Came with everything, the vent flue, instructions, wiring, baffles, all still in the plastic wrap! The other guy who was there same time as me would have taken all 3, thankfully I got their first!

Looks like I did good?? Evilbay has the same model without a blower for over $700 without a blower, and the ones with the blower meant for it retail over $1400-1700 bucks. I'd like to think I'm already ahead of the game!

Anyways onto figuring out where to put downstairs into the brewery area and installing the blower. The 1100CFM dual fan blower meant for this hood is pretty pricey over $370 USD.


My thought is to go with some 10" ducting and vent it out one of the basement windows. This will be a temporary setup and would break out the parts when brewing.

The fan I found is HERE and should have plenty of power for my current application. Just have a 2250W element with a 7.5 gal kettle. Eventually will be upgrading to a 16 gal 3v system down the road so want to have enough rig where I wont need to upgrade later.

I have poured over enough of the vent hood threads to start designing the setup. The found hood was simply a bonus. I would have certainly went the 30qt stainless mixing bowl method like others have.

- This hood is a Type 1, meant for grease and smoke. it does have a drip edge, but no condensate drain. At worst case I would need to add this on one of the corners. doesn't look too difficult at a glance.


I invite any feedback to make sure I'm on the right track. Pictures to follow.
K

When I move brewing inside, I'm building one of these: 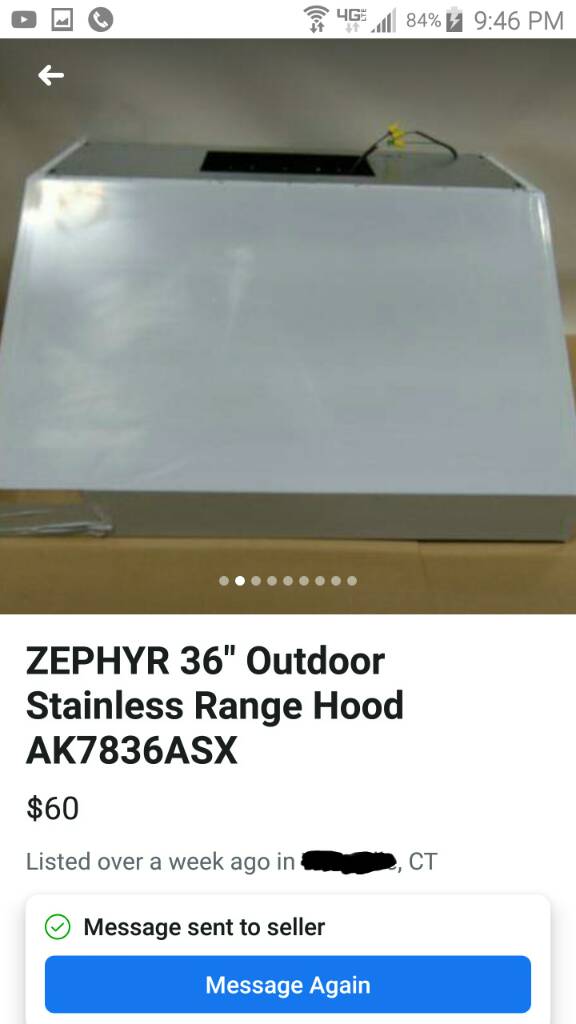 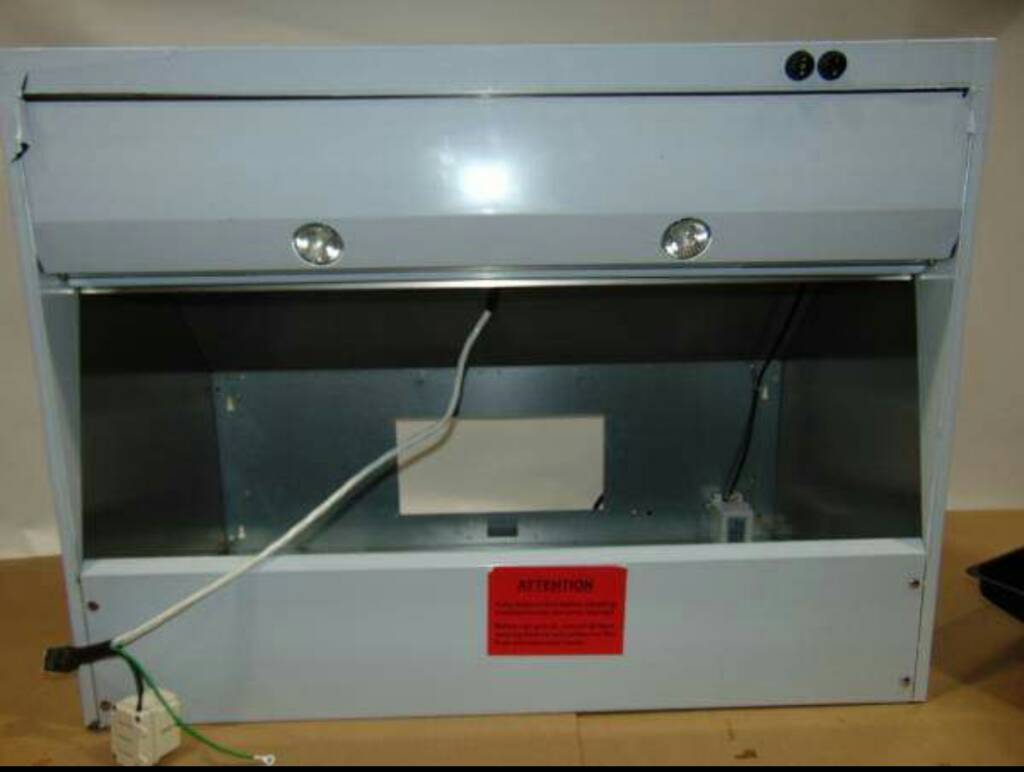 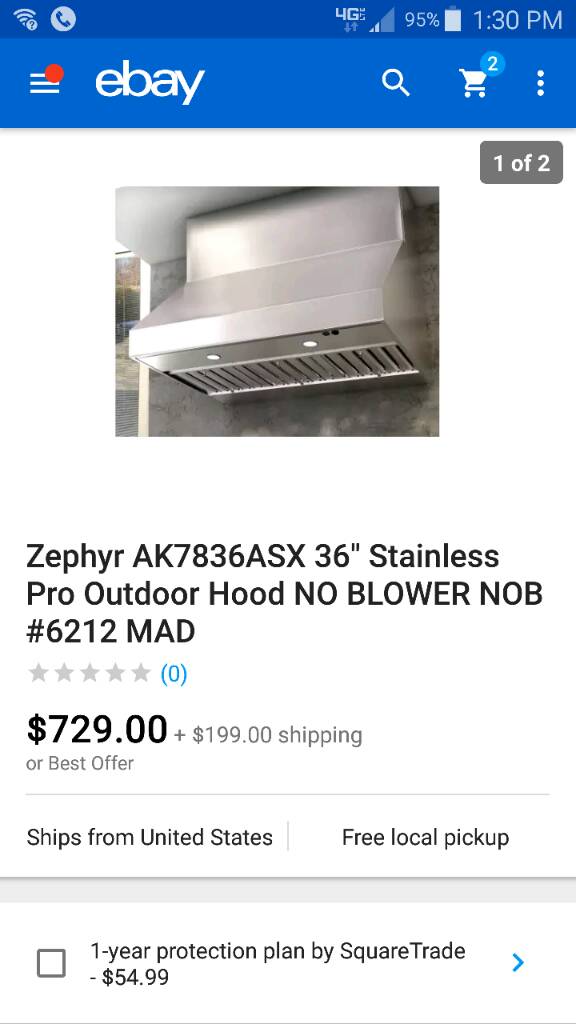 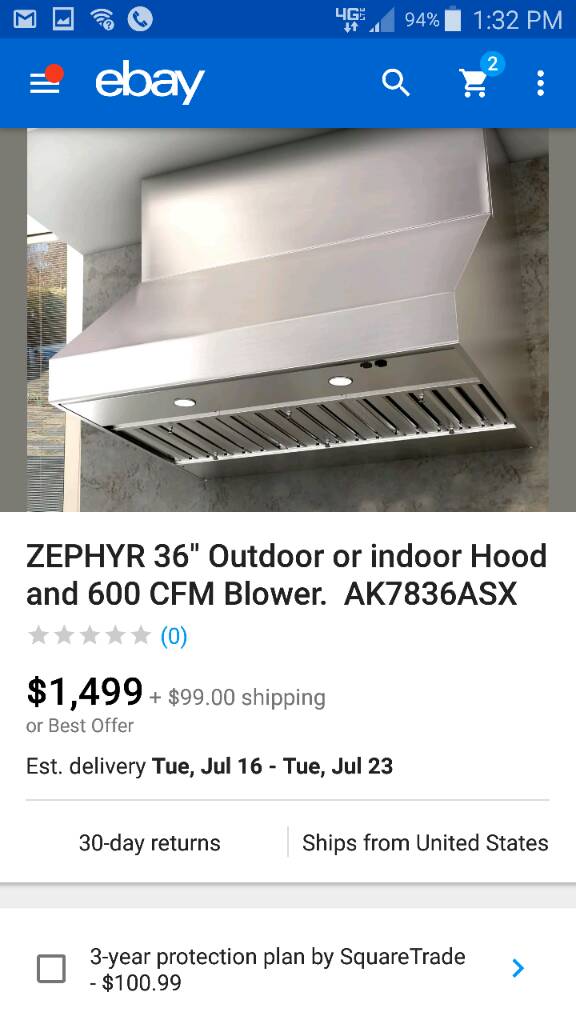 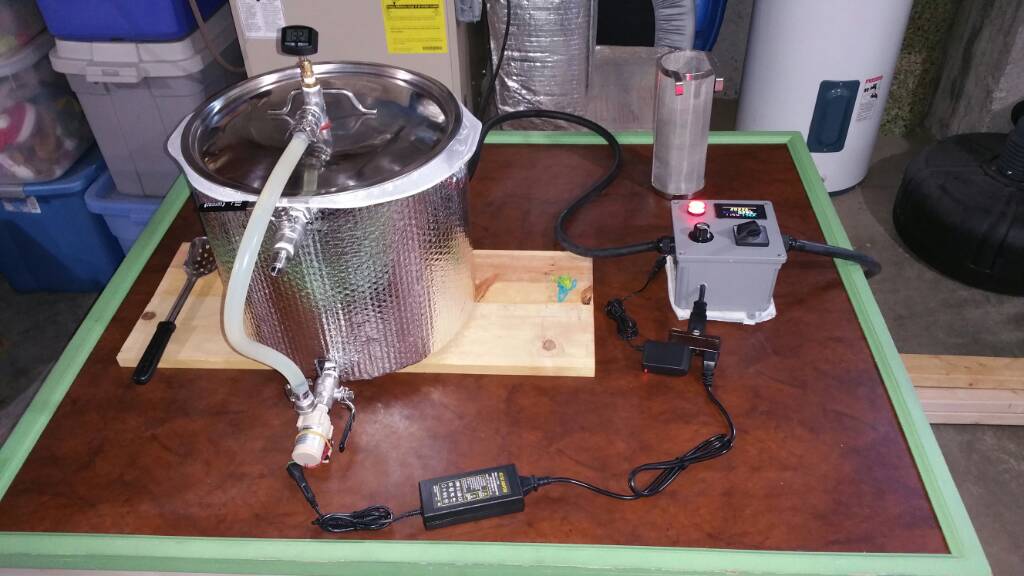 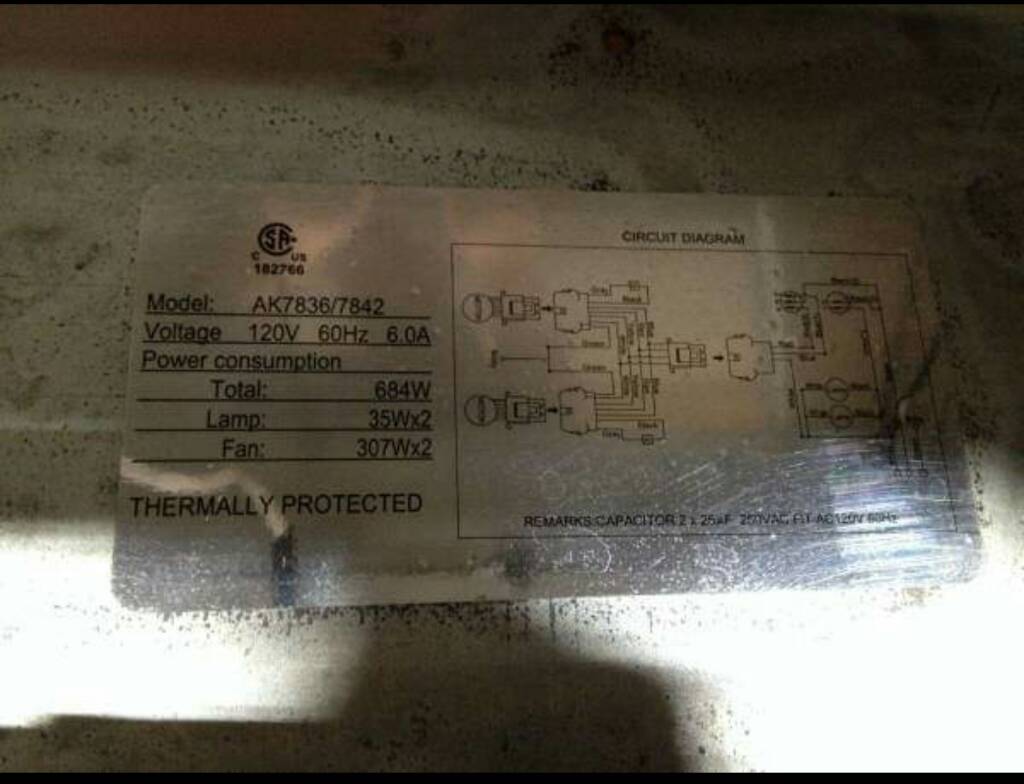 Got the hood mounted and the fan unboxed. Seems there is a discrepancy on how much CFM the 10" is rated at. Box says 1150cfm, but the label on the fan and the spec sheet say 980cfm. At full blast this thing move a lot of air! The built in speed controller is awesome! The amazon seller said due to various testing methods for CFM the numbers may vary. Researching the topic, the fan blade angle, rpms, diameter of input/output ports of the fan are the most significant. It does draw 200 watts at full power.

Should be able to test tomorrow. Figure get a 2.5gal pot boiling and see how well it does.

I welcome any feedback! 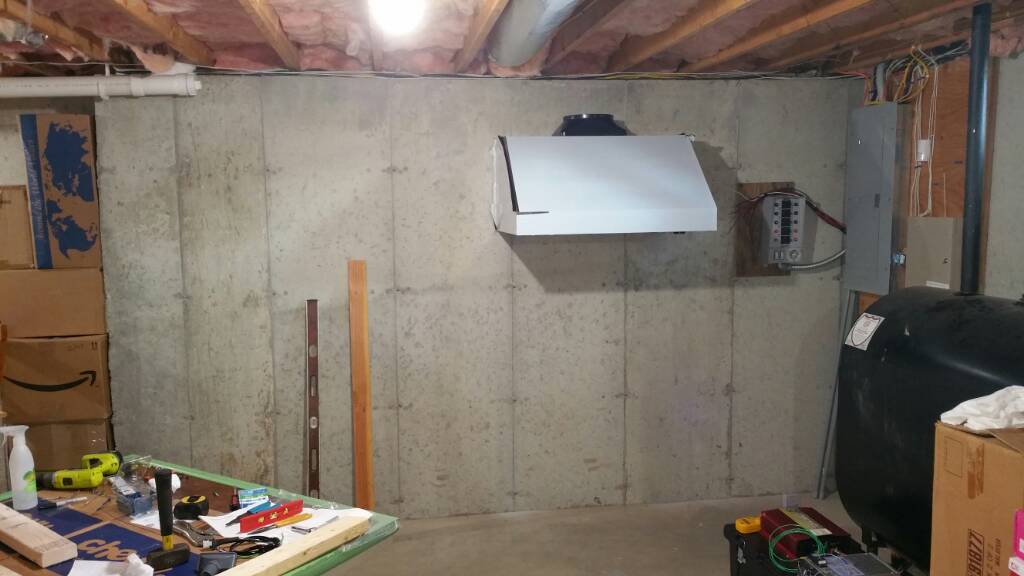 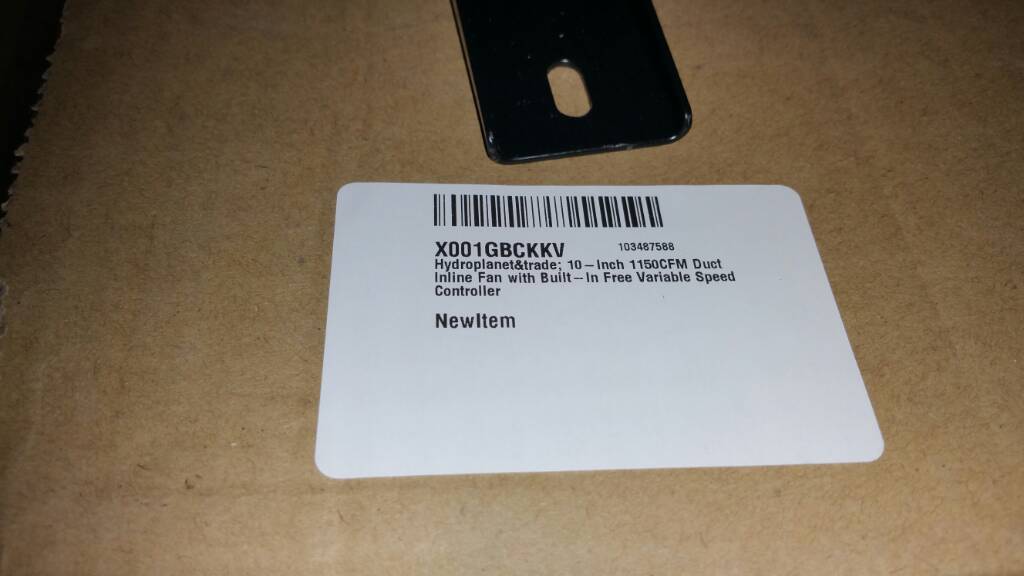 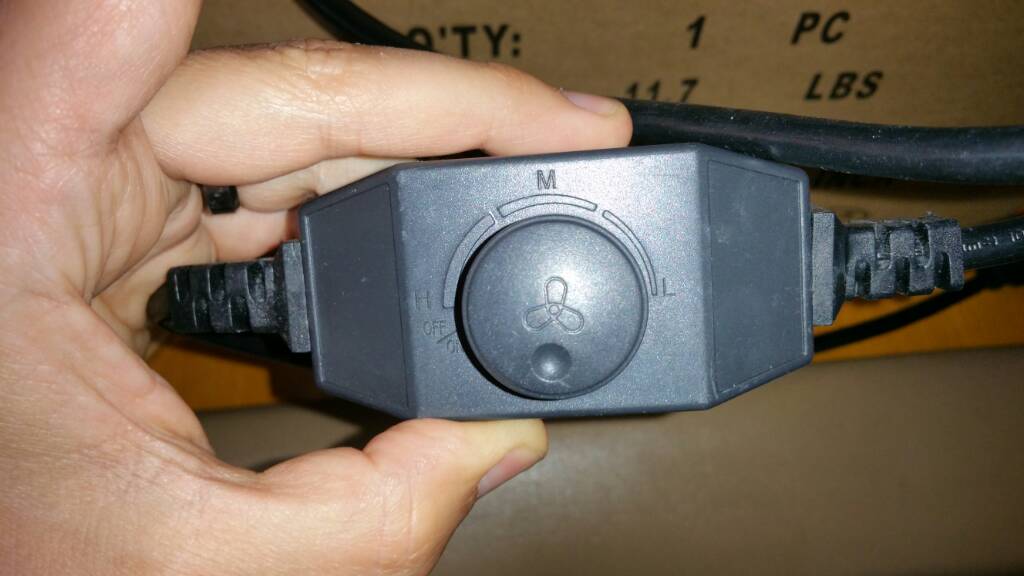 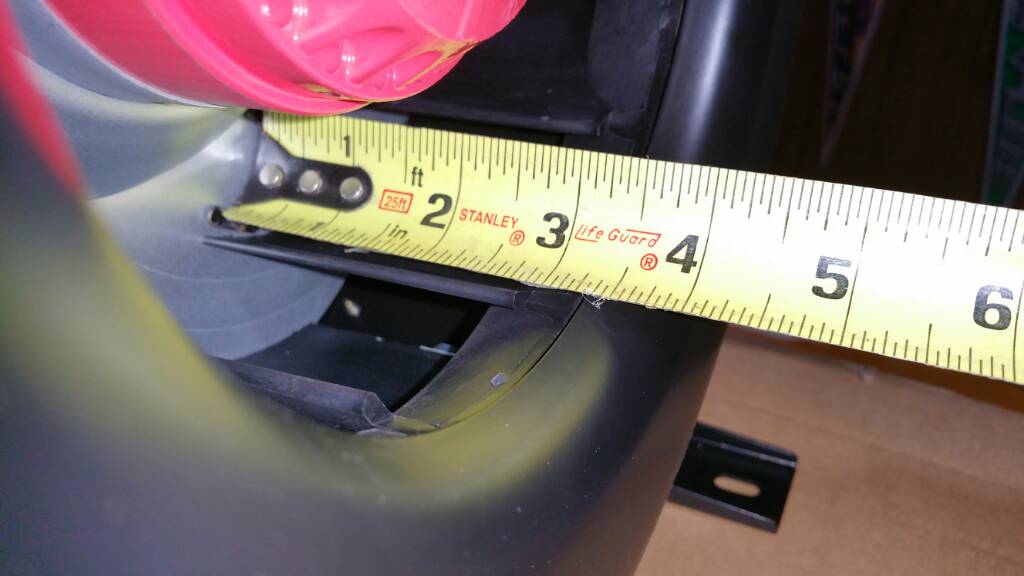 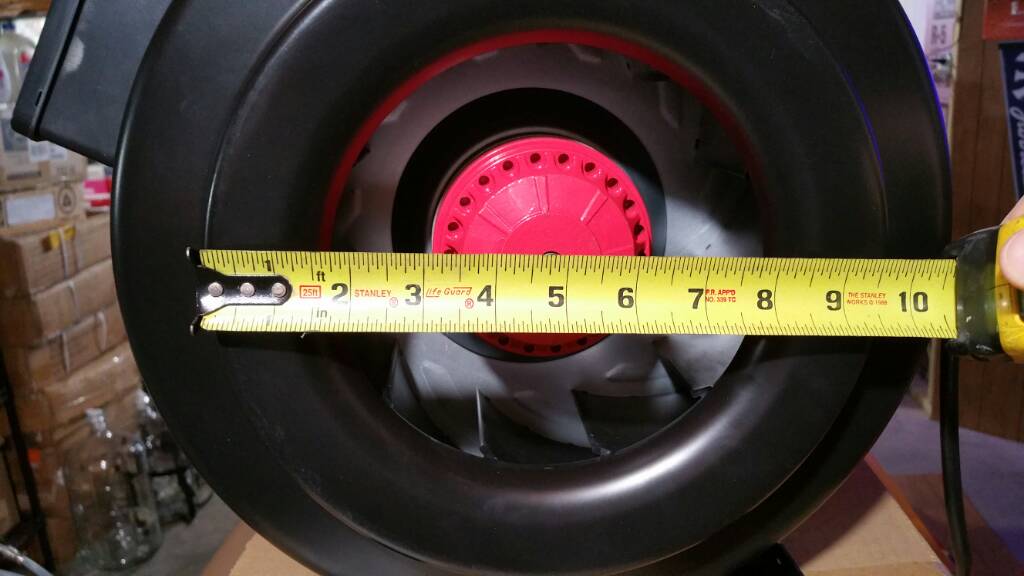 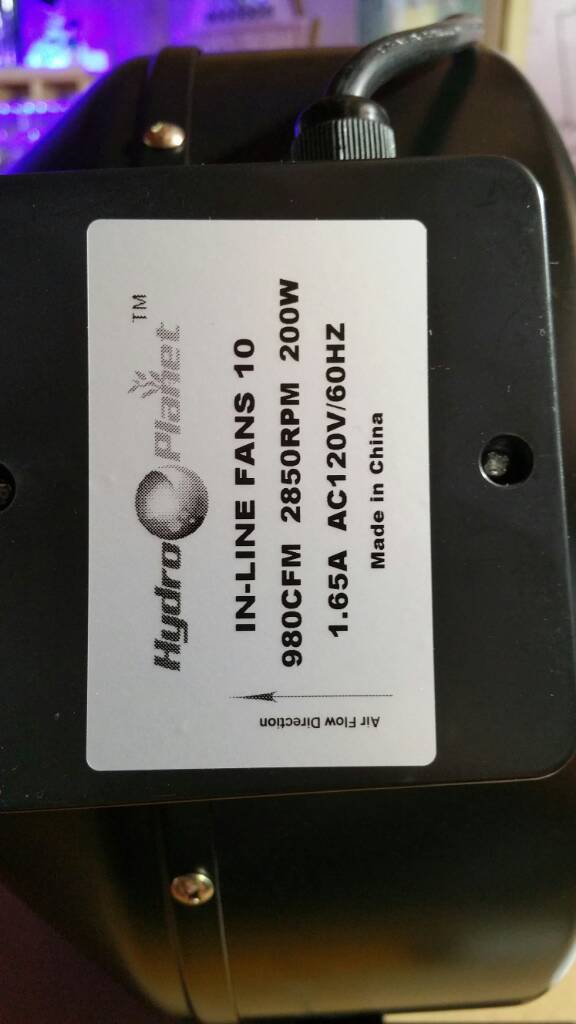 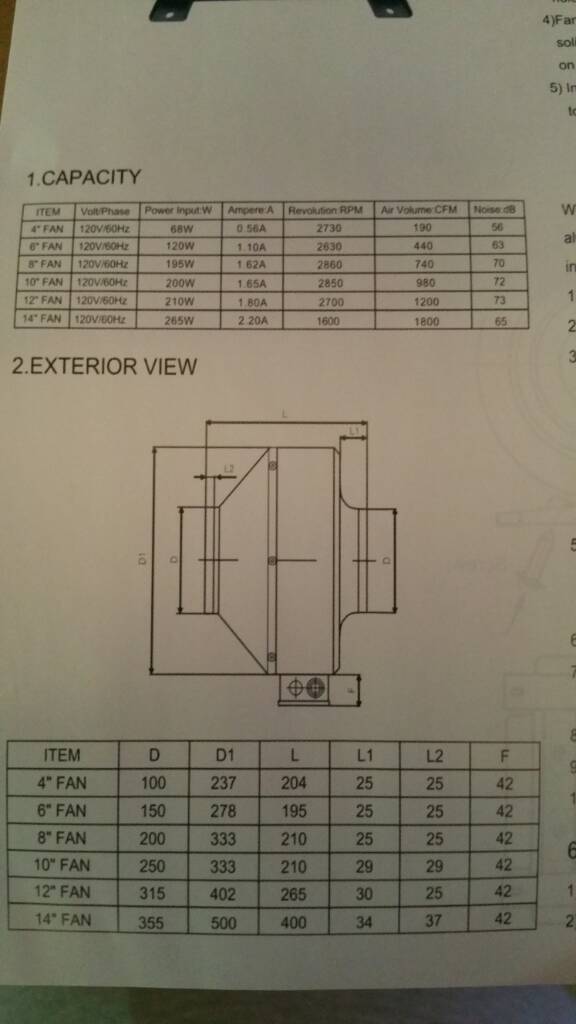 Probably overkill actually. I finally put a variable speed control on mine and it’s pretty surprising how far down I can turn the speed and sill have all the steam sucked up.
OP

matt_m said:
Probably overkill actually. I finally put a variable speed control on mine and it’s pretty surprising how far down I can turn the speed and sill have all the steam sucked up.
Click to expand...

Thats my thought too. Concidering the cost for everything (hood, fan, ducting, wiring) is around ~$180, I'd call it a win.

Cant wait to try it out later today!
OP

Hood is all assembled. Got the makeshift temporary ducting out the basement window hung. I debated mounting the fan to the side and hanging the ducting against the wall more, but didnt want to add another 90 degree turn. Its not pretry but looks like it will work great! Made a cardboard insert to stick the ducting in the window frame. Didn't have a chance to test yet.

The next investment, a properly sized stainless prep table! 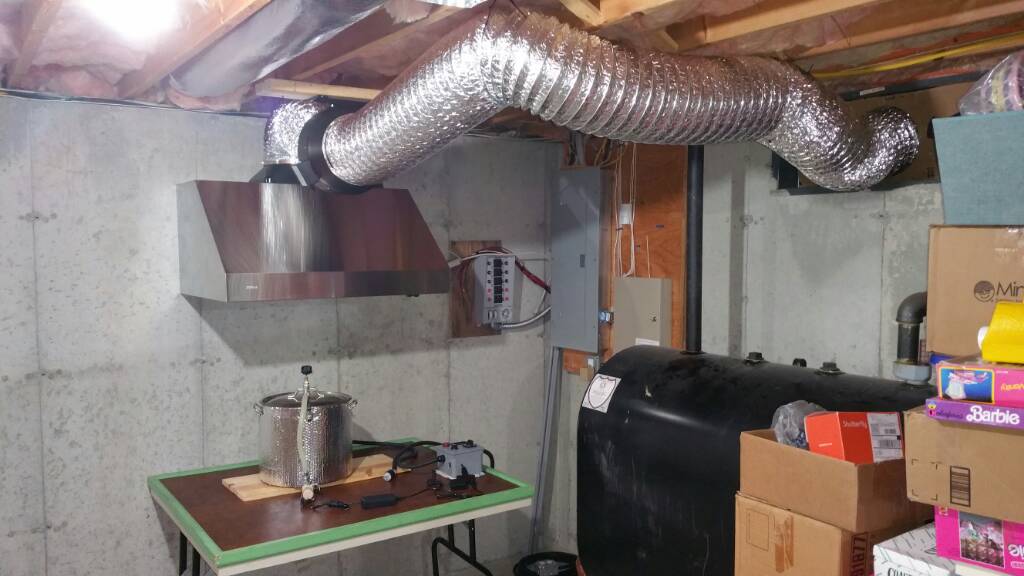 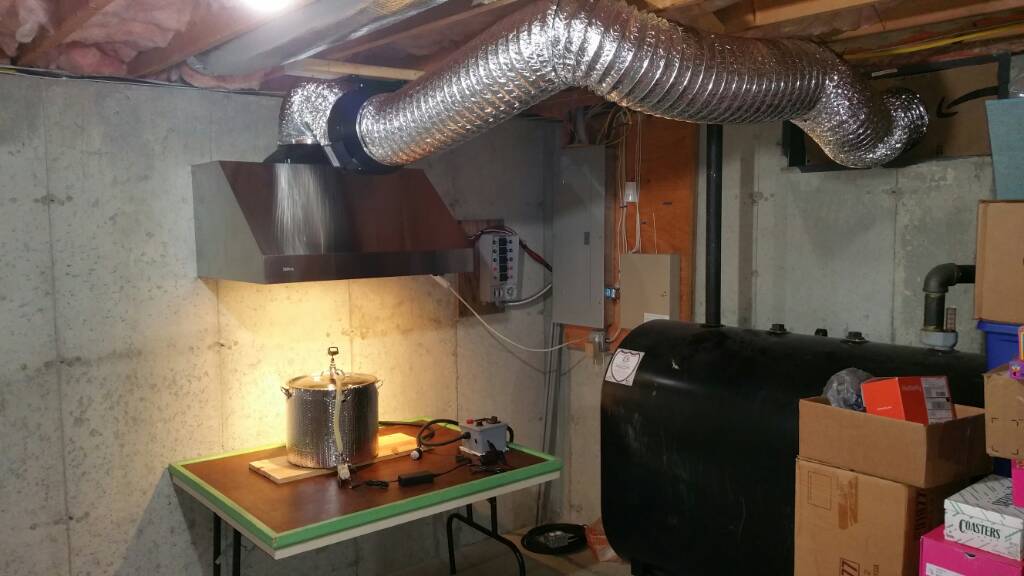 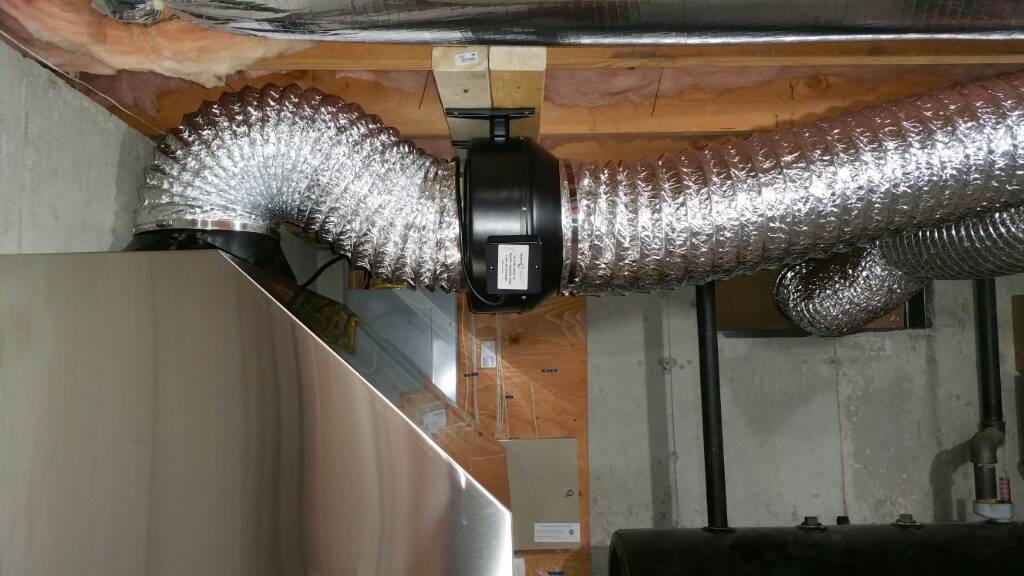 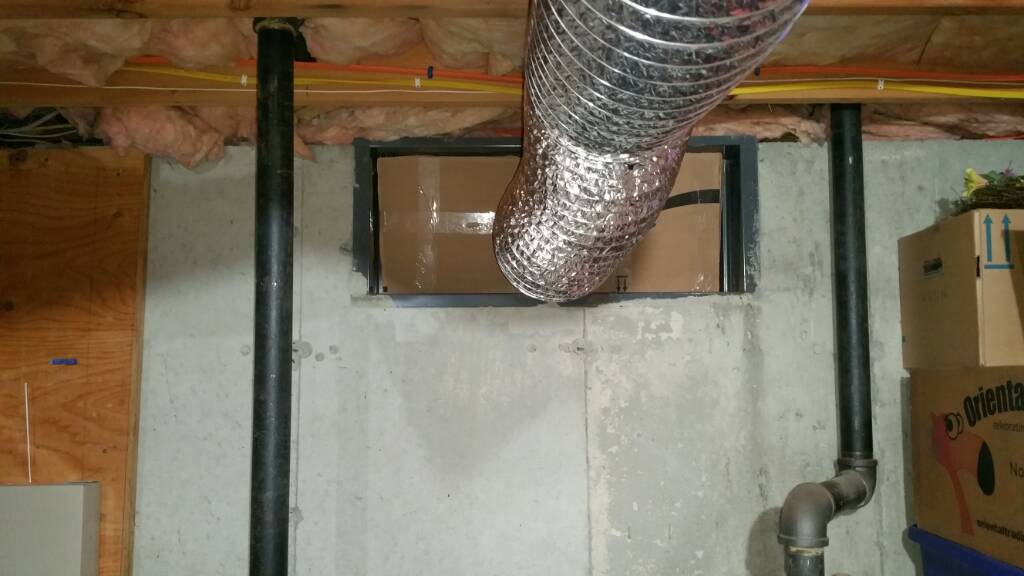 A video so far. I spoke to CS over at HoodFilters.com and they said that as long as the Type 1 hood has an adequate drip edge and removable baffle filters, all that needs to be done is add a 3/8" drain barb to the corner of the drip area and dont use the grease baffles, same functionality as the Type 2! SWEET!

Something always makes me giggle when i see pics of giant vent hoods and ductwork, and a tiny 10 gallon kettle hehe. But venting is important, so gotta do what ya gotta do!

My vent setup. Its a Broan 220cfm under cabinet range hood that i snagged brand new off craigslist for $40. I made a panel for the basement window, cut a rectangular opening in it to match the exhaust exit of the hood vent fan, put a wall cap on the exterior and sealed it all up with silicone, and wired it up to a 120v plug. Works great and the only time i get any excess moisture is when its absolutely frozen outside, but its nothing a little wipe with a rag every 10 minutes or so doesnt fix. For my 5 gallon setup, it works great and was cheap. I just want to eventually build some kind of brushed metal covering for over the vent to make it look nicer, maybe with a logo. 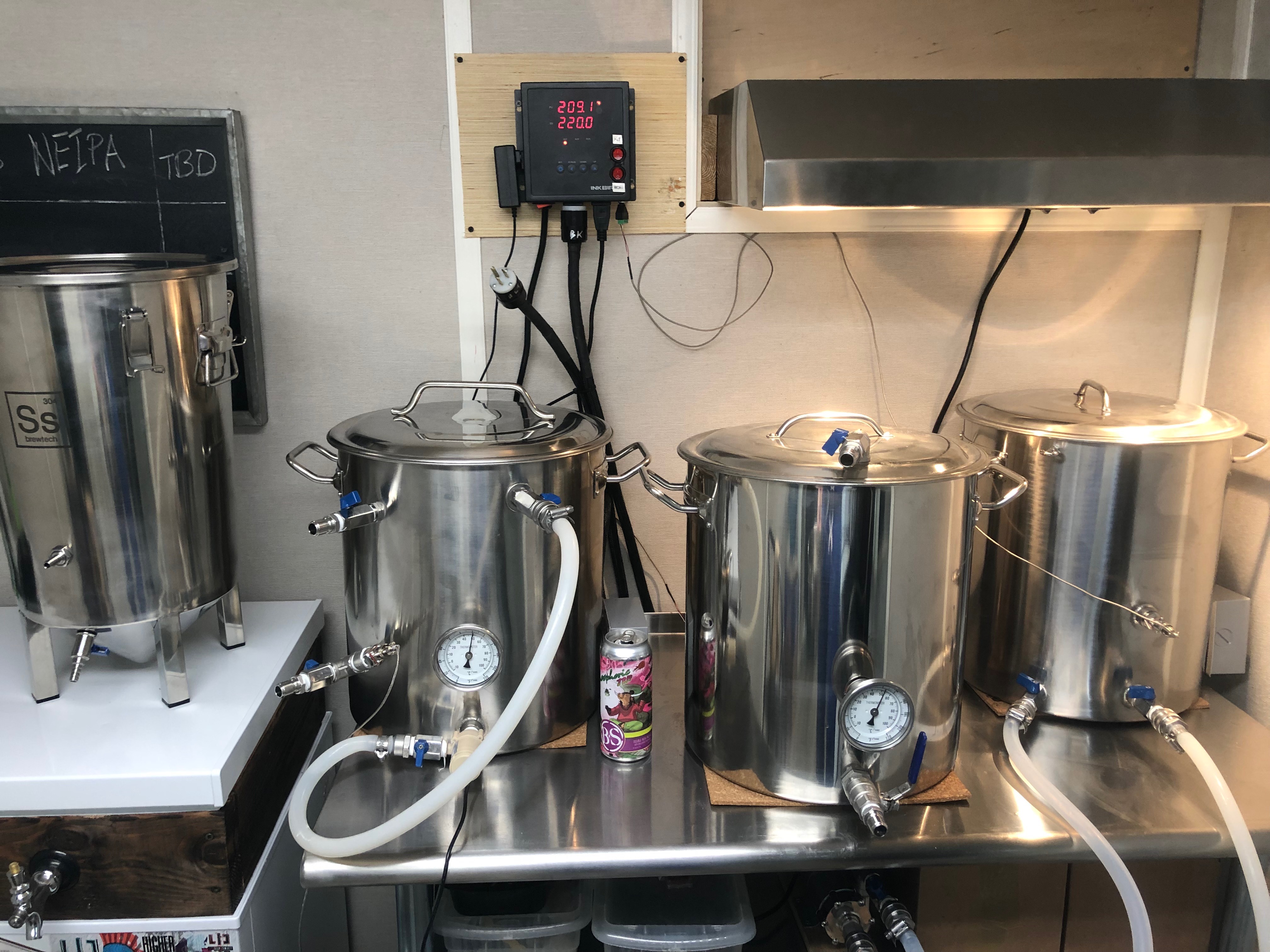 When I built my basement electric brewery I really wished I would have purchased a vent hood with baffles. Why? Condensation from the boil collects on the ceiling of the vent hood (the vortex fan is running full blast) and drips down unless I'm constantly wiping the condensate away. What a PITA!

So, if I had to do again I'd purchase the vent hood with baffles.
OP

Tobor_8thMan said:
When I built my basement electric brewery I really wished I would have purchased a vent hood with baffles. Why? Condensation from the boil collects on the ceiling of the vent hood (the vortex fan is running full blast) and drips down unless I'm constantly wiping the condensate away. What a PITA!

So, if I had to do again I'd purchase the vent hood with baffles.
Click to expand...

I do like the baffles, and the condensation drains off them to that rear tray. Though its not really a tray, its a cover for where the internal blower would mount. It wasnt designed to collect water there.

The modification I would have to do is seal that tray (held in by 4 wing nuts) and then cut small slits where the baffles mount so the water drains on TOP of that tray area. That way when the water builds up it wont leak from the edges but go to the 3/4" drain spicket I plan on installing.

R
Do I need a ventilation hood?