Up for sale one black and one red Tilt hydrometer (current generation, purchased in 2021) plus two repeaters. Prefer local buyer if possible (I'm in Pelham, NH).

These were used once or twice, then set aside since they didn't work well with my conical fermenters. I've moved on to the Pro version which does work and connect to the Tilt Pi I have setup in the same room.

If you want just one, specify the color (of the two) and if you want the repeater as well.

Payment if shipping/not local through Zelle or USPS money order. Not using paypal.

I would be interested in a repeater
OP
OP

@Blandbrosbrew shoot me a PM
M

I'm surprised the repeaters didn't solve the issue. I believe we have the same fermenters and my Tilts are pretty solid with no repeaters and a Pi 3B running TiltPi mounted on the wall behind and just above my fermenters. Before that I had some issues with a Pi Zero W but it may have been failing hardware as it eventually up and died completely. Or possibly the PI Zero just has a less effective antenna. Here's a raw data trend from Brewfather since I switched to the 3B. 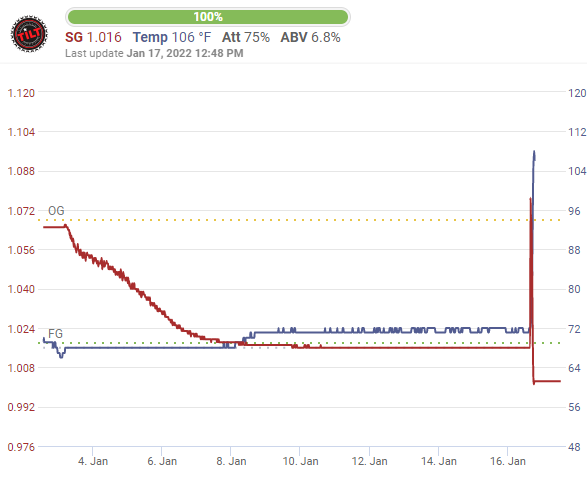 @matt_m Are you using the Spike chill coils inside your CF10's??
Either way, the standard didn't cut it except every so often. The pro models work significantly better. Occasionally the signal will drop from the pi4, but it gets picked up again soon after (less than a minute) so no harm done.

Either way, the two standards, and repeaters are up for sale. Would rather they went to someone who can/will use them than have them sit here for much longer.

I'll probably be getting at least one, if not two, more of the pro models in the coming few months. One for a CF5 I'll be using for mead (and cider come fall) and another for the Brewers Hardware jacketed (15 gallon) conical I want to get. When they get them in that is. Damned supply chain BS.
M

I do have the coils. My Pi is mounted a little higher than the top of the conical so that may help in that there’s less liquid in the way. GLWS!
OP
OP

I've had the Pi a bit higher too. Sometimes I could get the repeater to connect the two (the tilt and the pi) but too often, after a couple of days (at most several) they wouldn't stay connected. As I said, I had enough trying to figure it out and went to the pro models. At least those have the signal strength to get through things and connect to the Pi. I did try the repeater in many different locations on the top of the conical. Sometimes it would work for a while, then stopped.

Who knows, maybe I had the 'perfect storm' for getting the standards to NOT work.
You must log in or register to reply here.