The Brew Barn - The Legend Continues!

It's been a while since we've had an update on the Brew Barn. For those of you not familiar with the project, our member Peter L.(Scele) has set out to build his brew space from scratch, and we've been lucky to see the progress along the way. To catch up please read parts 1, 2, 3, and 4.
***
First of all, I'd like to say that I'm sorry for how long it's taken to get this article up. I've had a busy couple of months and just couldn't seem to get it done.
So, last time we did a brew barn article I'd just gotten it up and running ex power. Well, I got the electrician to come by and install the needed electrical outlets and fuse box. I also added a few fridges and some finishing touches to the brewing space: 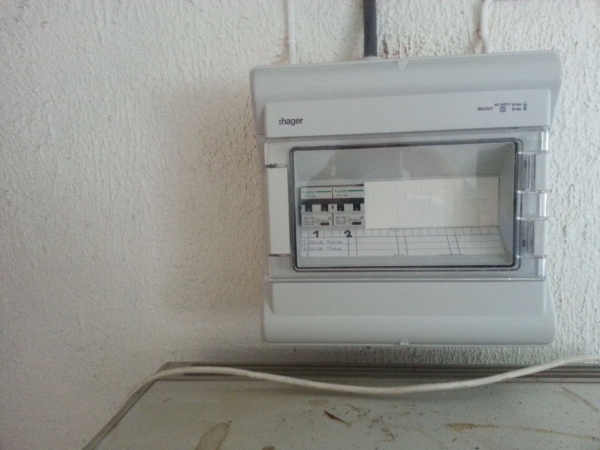 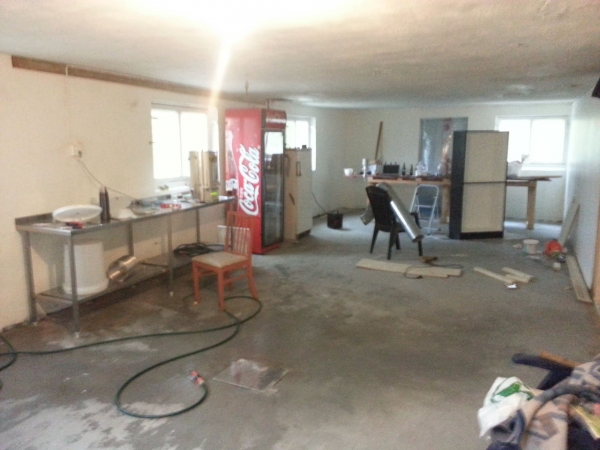 With everything in order I figured it was time do a proper brew day, with an American pale ale on the menu. So, I fired up the Breumeister and cursed out my relatives for leaving the drill for my malt mill completely out of power. After about 30 minutes consisting of "milling" - "recharging" phases, I was able to set the Braumeister to the correct program and get going. The nice thing about the Braumeister is the complete control over the temperature, a friend of mine described it as "Removing the annoying parts from brewing". 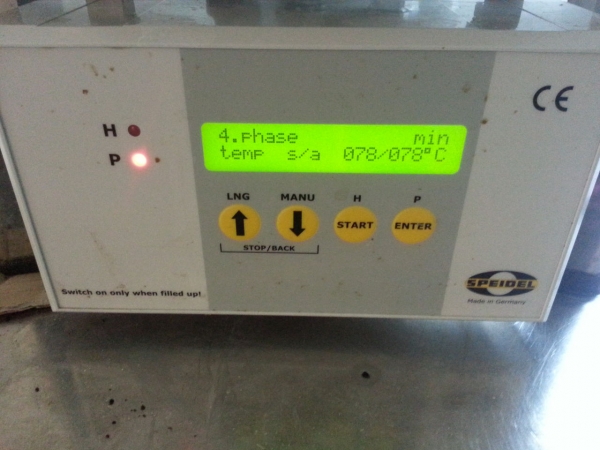 I put in 4kgs of Maris otter pale malt, 0.5 kgs of caramalt 80l and 0.3 kgs carapils (for foam) and went at it.
After a 60 minute 4 step mash I hoisted the malt-tube out of the kettle and let it drip off for about 10 minutes. I do not recommend hoisting such a malt tube out alone, and by hand if you have been drinking. I'm 6.1 and 220 lbs and with the 90 cm tables, I need a stepladder to do it safely. 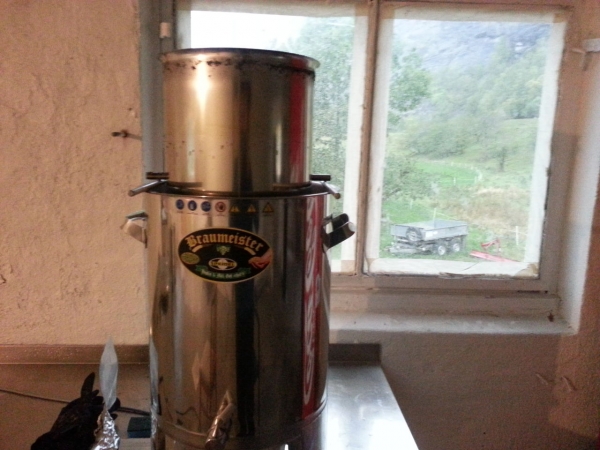 After getting the malt tube out I started on the 60 minute boil. The problem was that I'd forgotten to change the boil time from doing a bigger beer at 90 minutes the week before, so I had to cancel the process and start over, to avoid having too much boil off. 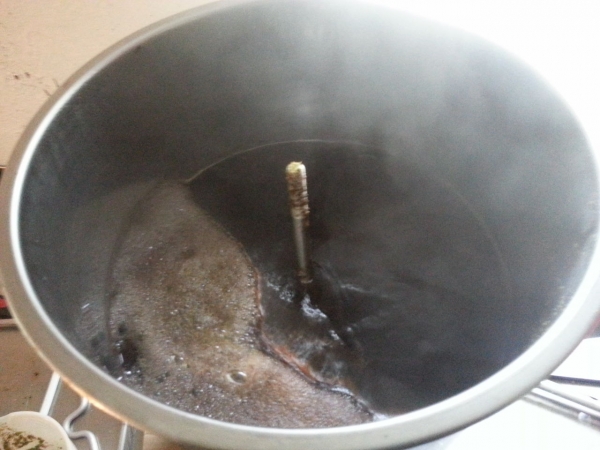 As long as the Braumeister is set to 102 degrees Celsius, it tends to keep a fairly rolling boil, with small breaks if you add heavy additions like lactose or a worth chiller, which tends to drop the temp by 2 - 3 degrees. Throwing in the worth chiller 15 minutes before drops it down from 99 to 97 for a few minutes. Note to self, if you need to do sugar additions, do them before adding the worth chiller and save yourself some cleaning.
I realize that the "brewbarn" project has been dominated by interior shots, so I figured I should show you my view while brewing: 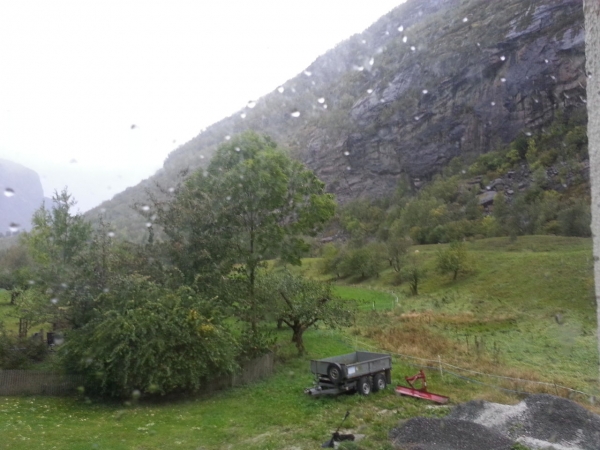 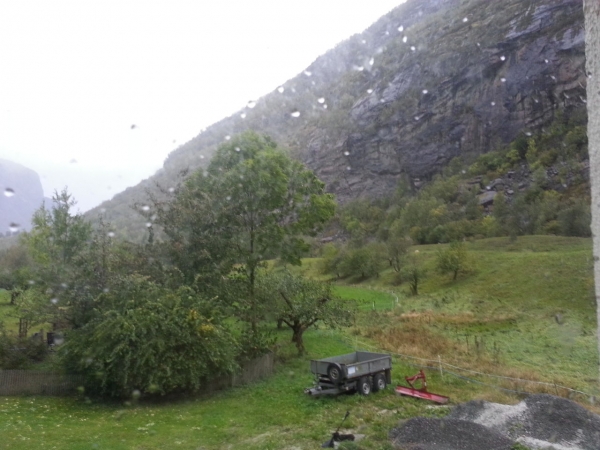 I may have missed it-but what part of the world is this?
@norrisk66 Europe somewhere is my guess. The units used screams it's not the States. My guess is the UK somewhere, England perhaps...maybe Northern England to be more specific? I'm curious to hear where though.
I don't know if he wants us to giveaway to much, but it's one of the Nordic Nations.
What's this about a "malt tube?" Is there a further explanation available as to what your rig is like? I've been considering BIAB and having permanent malt tube seems a lot more attractive to me than flimsy bags.
Such a great project. I'm drooling
@Hobanon
If interested in "all things about the Braumeister", go to....
https://forum.braumeisters.net/index.php
I'd post it here.. but, the article is about the barn.. not the BM
The aye's have it, you suck. Just kidding of course, and damn, what a view! All the best in your new brew house.
@Hobanon
It's a lot like BIAB. http://www.speidels-braumeister.de/20-and-50-litre-braumeister.html
Maybe I missed some pictures but all I see is a big empty room with a Coke machine and some work benches.
Vad spnnande! Bra gjort, Per!
I'm glad to finally see things coming together at last! Nice view, reminds me of down home on our mountain. I like the Spiedel the more I see it. It'd be great to be able to use one in the brewery instead of the kitchen. Good job so far!
Just a suggestion, since I found this post and had to work backwards... if you could edit your previous segments and put a link at the bottom to the next segment it would be easier to follow.
You must log in or register to reply here.
Share:
Facebook Twitter Reddit Pinterest Tumblr WhatsApp Email Link