It took me a couple of years of homebrewing before I started worrying about my fermentation temperatures. Up until then, whatever the temperature my basement was at, was what my beer would be at. However, I eventually wanted to control my fermentation temperatures to improve the quality of my beer, be able to cold crash, and try my hand at some lagers. So I bought a used fridge on Craigslist and built a simple temperature controller to control the fridge’s temperature more accurately. The small control pad can set a temperature range and the controller will turn something on and off to stay within that temperature range. Just like the air conditioning in a house. 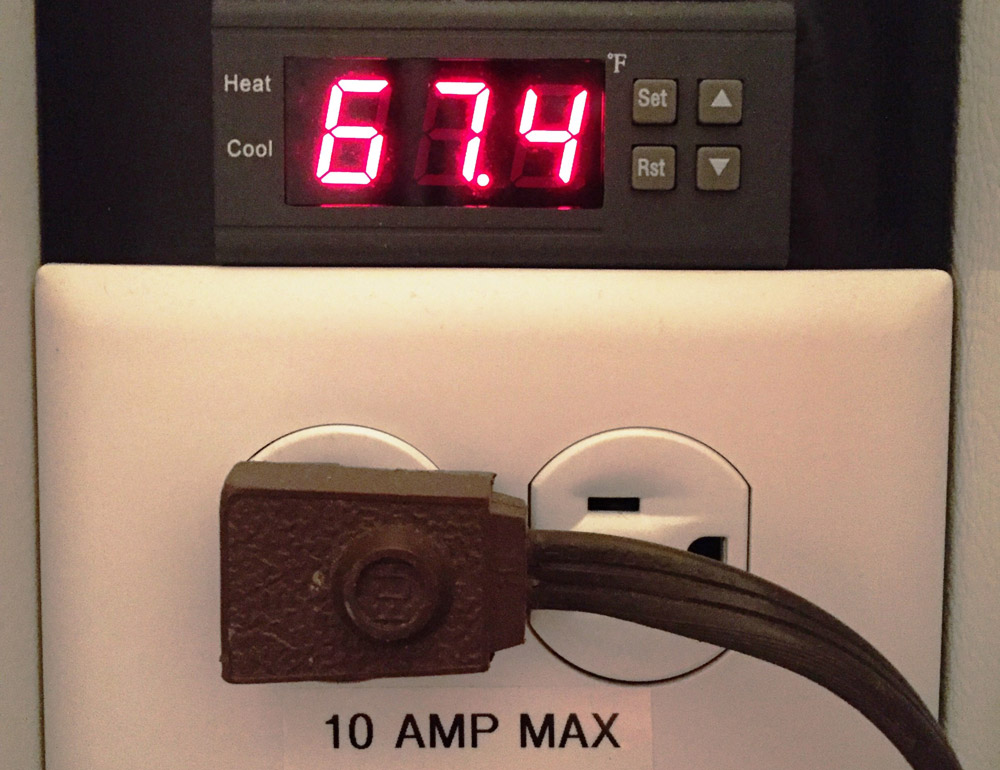 I use a generic controller that’s very similar to others that I’ve seen, but they almost all have the same problem. They’re not intuitive. Mine only has 4 buttons and a simple LCD screen to change a dozen different settings, so knowing how to access each menu and what each menu does is vital. Changing the desired temperature is about the only straight forward process. To do that, you tap the “Set” button and will notice that the displayed temperature starts blinking. You can now use the up and down buttons to change the target temperature. Once you’re done setting the temperature, you hit “Set” again and that’s the new temperature that your temperature controller will target. FYI, the screen will jump back to displaying the current temperature of your beer and not the target temperature you just chose. This function is just as easy as changing your home’s thermostat. Mine shows the current temperature by default, so if you sit in a menu too long the display will jump back (out of the menu you’re in) to displaying the current temperature. 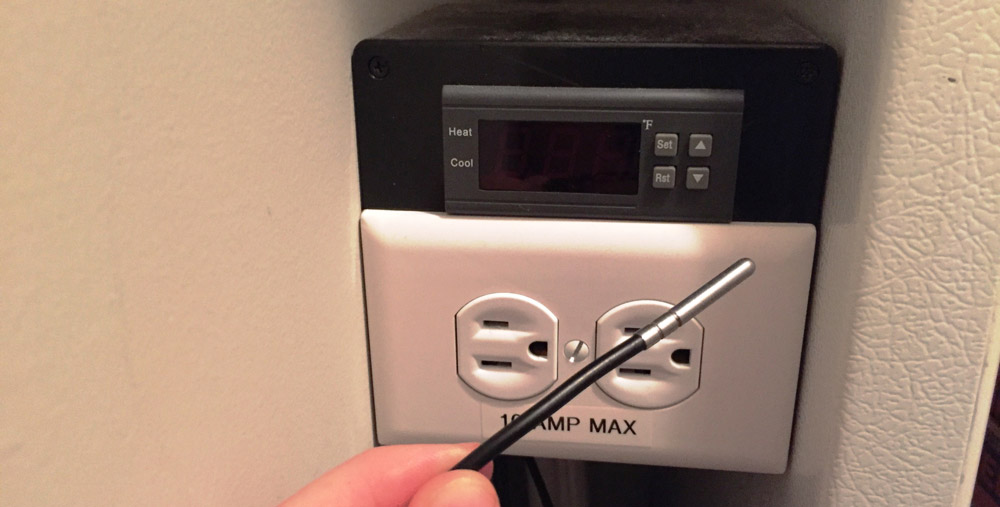 The rest of the controller’s functions will need a little more explaining. We’ll start with one of the first things you should do with any temperature probe… calibration. In a perfect world, you would plug your fridge into your new temperature controller, set it to 68ºF, and boom you’re beer is fermenting at exactly 68ºF. A new controller requires you to fine tune its accuracy. When you first plug it in and the display reads 68ºF, the actual temperature might be 67.5ºF for example. You need to adjust the controller to match the real world temperature. I’ve heard that putting the temperature probe in ice water is a good way to calibrate, since we know water freezes at 32ºF. However, when I tried that method I had 2 other thermometers tell me something different. So I trusted the 2 thermometers (that are both already calibrated) and adjusted my probe to match those readings instead.
Therefore, I’d recommend using a separate thermometer for calibration. To adjust the calibration, you have to hold down the “Set” button until the screen displays letters. This means you entered the main settings menu. Then use the up and down arrows to scroll through that menu until you find “CA” which is the calibration menu. Tap “Set” again to enter the “CA” menu. You can now use the up and down arrows to add or subtract degrees (0.1ºF increments) until your displayed temp matches the real world temp. In my example, I would subtract 0.5ºF, so my controller would show 67.5ºF like my thermometer. Hit “Set” to save your adjustments and the display will automatically jump back to the main menu. You can wait for it to automatically close the main menu or you can hit “Rst” (reset button) to jump back out of the main menu. 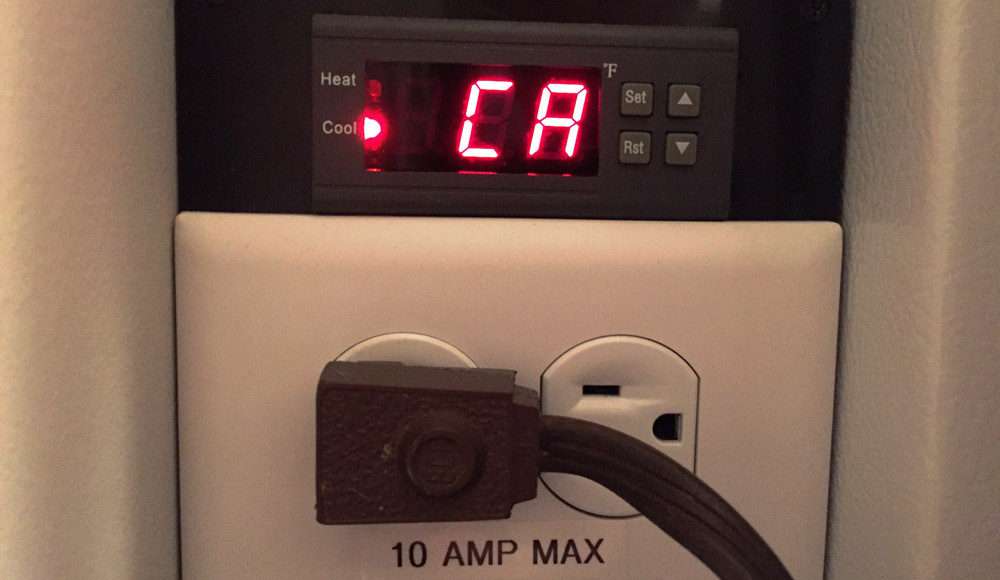 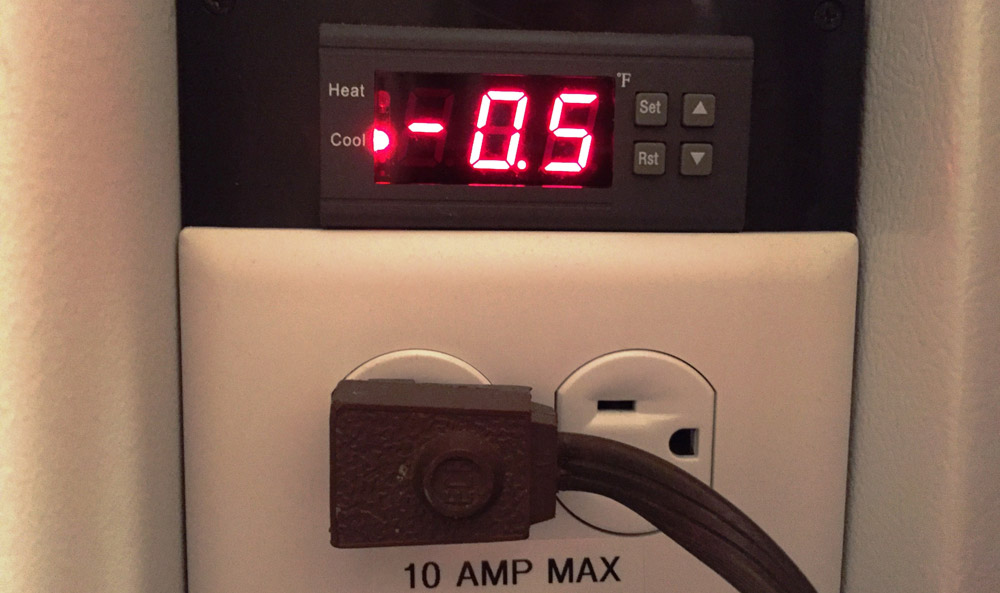 Another important setting is called the slewing range. This is how tightly you want to control your temperature. If I have mine set to 65ºF and I set the slewing range to 5ºF, the fridge will not start cooling until the temperature reads 5ºF higher than my target temp (65ºF + 5ºF = 70ºF). Once the fridge turns on at 70ºF to cool things down though, it won’t stop cooling until the temperature reaches my target of 65ºF. With a 5 gallon batch of beer temperatures don’t change instantly though. So even if the fridge kicks on at 70ºF, the beer may continue to warm up to 72ºF until the air gets cold enough to start cooling the beer. After a few hours of cooling, the same thing may happen on the other end of the spectrum. Once the beer is cooled to 65ºF and the fridge turns off, it’s still sitting in a 40ºF fridge and may drift past 65º to 63º. In this example, that means your beer is fermenting between 63ºF – 72ºF. Not exactly a precise 65ºF fermentation. To make this more accurate you can tighten the temperature window by reducing the slewing range. Just make sure your fridge isn’t turning on and off frequently since that will reduce its longevity. I had this problem when I had my probe sitting in a cup of water in my fridge, since there was no good way to get the probe inside my bucket to read the beer’s actual temp. For that setup I had to use a slew of 2ºF since 1ºF was causing my fridge to turn on and off every 10 minutes.
Since then, I’ve installed a thermowell in my bucket so my probe isn’t as exposed to the cold circulating air in the fridge any more. With the thermowell I prefer to use 1ºF since that’s the smallest window possible for my controller. To adjust the slewing range, hold the “Set” button until you enter the main menu. Then use the up and down arrows to find the “CP” menu. Hit “Set” to enter the “CP” menu. From here you can use the up and down arrows to adjust how many degrees you let your beer drift away from your target temp (1ºF increments), before the controller turns the fridge on again to cool things back down. Hit “Set” to save your adjustments and the temperature controller will automatically jump back to the main menu. The last step is to hit “Rst” (reset button) to close the main menu and the display will go back to its default of displaying the beer’s actual temp again. 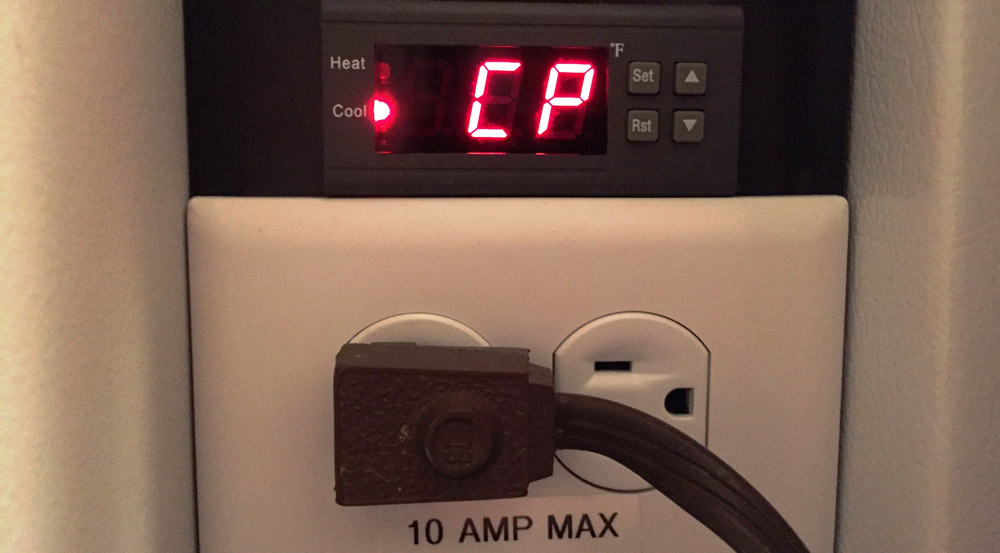 Like anything else there are several types of temp controllers out there with a range of features and prices. Some additional features I’ve seen include: higher accuracy, outputs for an alarm light or bell, LED display, wider temperature capability, and auto/manual control.
A more accurate way to maintain temps would be to use a PID Temp controller. Here’s an example of how it works. If you’re heating a pot of water to 150ºF with a standard controller, it’ll heat with 100% power until it reaches 150ºF and shut off completely. With that method, the water will almost always overheat a few degrees (overshoot). Then it won’t turn the power back on until the temperature drops to 149ºF (undershoot) and then it’s back to blasting 100% power again to try and get back to 150ºF. With something called fuzzy logic, the controller can tell when you’re near your target temperature and will reduce the power as you approach. So when you reach 145ºF while heating, fuzzy logic can lower the power to 50% so you don’t overshoot 150 ºF like a standard controller. It basically allows you to slow down as you reach your target instead of running past it. It’s a simple idea but very helpful when trying to keep a stable temperature. Most of the PID’s I’ve seen used for homebrewing range from $10 - $100, depending on what features or brand you want, and how much DIY you'd like to do. 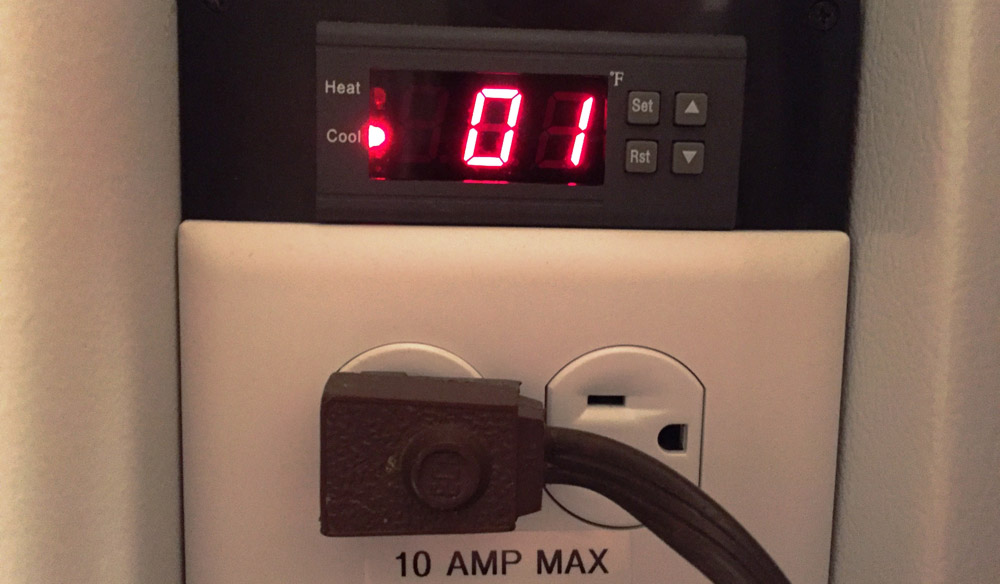 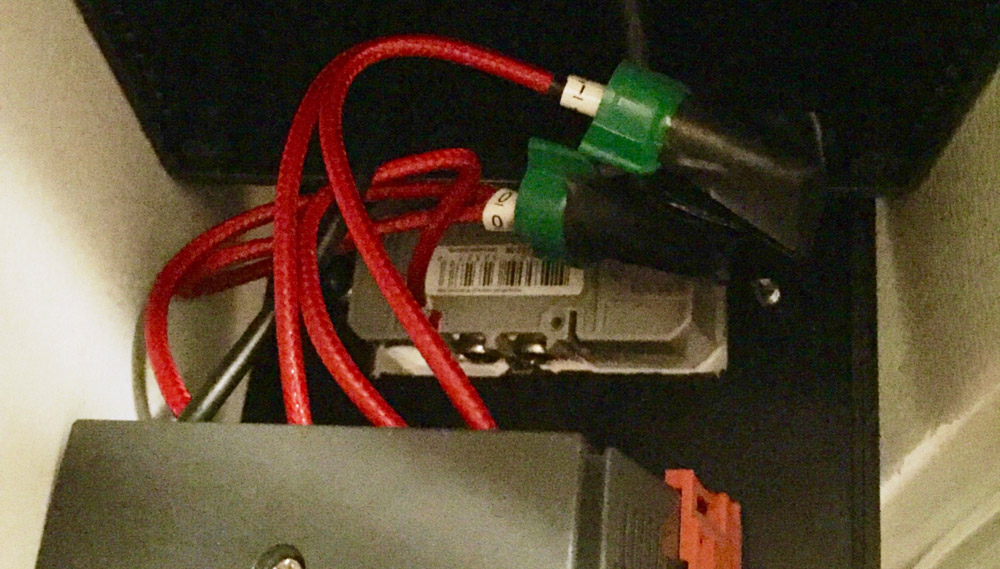 My temperature controller is made of a plastic project box, a generic controller display that came with a 3’ temperature probe, a standard 120v power cord, a few twist-on wire nuts, and a common household outlet / face plate. All together it was about $25. I really like how it takes the temperature guess work out of fermentation, diacetyl rests, cold crashing, bottle conditioning, and carbonating kegs. I consider a $25 investment well worth it when it prevents me from potentially ruining $50 batches of beer. Sometimes spending a little money can help you save a lot.