taps on collar or on tower?

I want to build myself a larger keezer which will hold a least 5 kegs and my 20lb CO2 tank.
I already have a small keezer which I fitted with a collar and which works great. But it is small and only holds two corny kegs.
Now I found some great keezere designs here and my wife is ok in having one in the house if the freezer is nicely disguised.
My concerns are now the taps. Not sure if I should use a collar with taps on the front or towers.
Collar:
Pros: Easy to build, Cost effective, lid is easy to lift, lines are easy to clean; I may need the collar any how depending on the size of the freezer and mounting taps in the wood collar is easier than installing towers.
Cons: The keezer will be sitting in a small niche where everyone walks by on the way from the living room into the garage. I am afraid that kids may easily be tempted at pulling at the tabs or hitting them by accident. And on weekends we often have friends of my kids running around the house.
And when tapping I found that there is always a chance of a spill even with a drip tray installed since the beer/foam may spill outside the tray.
Also the keezer will be mouted on wheels to be mobile as I may want to move it on the patio once a while. But with the taps on the side it may become to wide to fit it through doors.

Towers:
Pros: Out of reach from accidental hitting the taps when walking by. Out of reach from hands of smaller kids. Easier to clean freezer top when spills occur. Less chance you spill on the floor. Slimmer design.
Cons: Towers may not get cooled that efficient, lines not as easy to clean and not as easy to test when lid is open, lit may become heavy to lift, opening lid without emptying the drip tray will cause major problems with the wife.. lol

What are your thoughts?

There are tower designs on this website that include ways of cooling the tower. So you may want to take a look at some of them.

Congrats on getting the SWMBO's approval!

If you're concerned about the drip tray when opening the lid of the keezer, put a drain hole through the top and drain to a container inside the keezer. This is also easier than handling a full drip tray if you have a big spill.

Instead of tap locks, get a locking freezer (or put a lock on the freezer) and disconnect the liquid lines from the kegs when not in use. Sure, they may get an ounce or two out of each tap, but not enough to really get into trouble.
T

I've had three kegerators, the first two were for commercial sanke kegs, the last (current) one homebrew/corny kegs. The fist was a converted fridge with taps coming out the side (had to be careful to not hit a coolant line) the second was a keezer with a collar and tower taps, the current is a keezer with collar/collar taps. I would say the current version is by far my favorite, as the fridge was too big, the tower is annoying if the keezer is against a wall-I was constantly hitting the tower on the wall and accidentally turning on the tap when I opened the lid. The current version is on wheels, and fits through an average size doorway just fine (7.0 cu ft professional from menards, it fits 4 cornys and my 20 lb tank, I haven't tried to rearrange to fit another keg because I don't have any more but it may work, not sure. ). I'll likely go collar taps on any future builds unless I build one into a dedicated bar. Then I'd use a tower.

I have grandsons who are just tall enough to reach A/V system buttons and knobs, anything fragile within 4 feet of the floor - and collar-mounted faucets...

(ps: The trip tray drains down to a catch bottle, and there's enough clearance behind the keezer for the tower to clear without bumping anything) 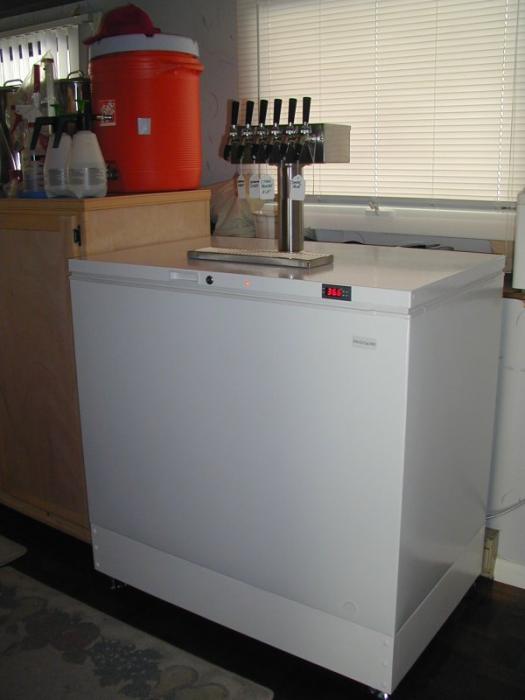