Summer, the season of backyard barbecues and beer. Many people have their “go-to” summer beer, but with the rich history of summer beers and the plethora of options to choose from today, it can be a great time to try something new.
It’s only fair to start off an article on summer beers with Germany, the country that gave birth to the lagering process that produces the majority of all beer consumed today. Before the invention of refrigeration, beer had to be lagered in the icy winter conditions and wasn’t ready to drink until the warmer months. Many of the popular styles today, such as Pilsner, are as a result of this cold treatment. Some of the most well-known styles are below:

Originally from Cologne, Kӧlsch is an all-barley beer fermented with an ale yeast at near freezing temperatures. Light, crisp, and clear, Kӧlsch beer is characterized by its subtle, slightly fruity flavor. Being a controlled appellation beer, only true Kӧlsch can be brewed in Cologne. Breweries in America have Kӧlsch-style lagers, such as Magnolia Brewing’s Kalifornia Kӧlsch.
Commercial Example: Any Kӧlsch from the region 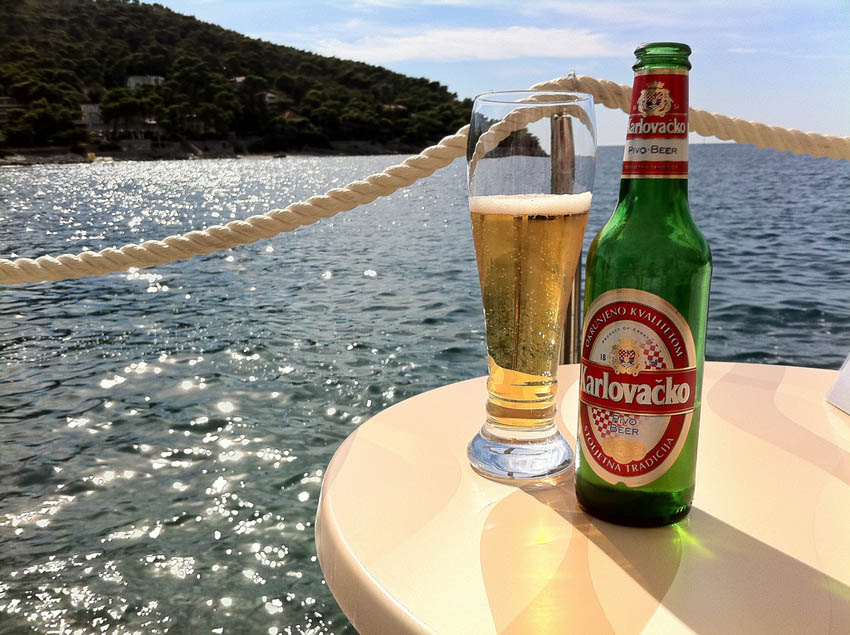 Known as the world’s most popular beer, the Pilsner hails from the city of Plzeň, in Czechia. To stay true to the style, a Pilsner must consist of a generous dose of Saaz hops and 100% Pilsner malt. Modern descendants, such as Budweiser, use a multitude of adjuncts like corn and rice to keep the cost down, and bitter with hop extract of varying origin. Anyone who has drunk beer has likely had a Pils of some form, and none would argue how refreshing it is on even the hottest of summer days.
Commercial Example: Pilsner Urquell 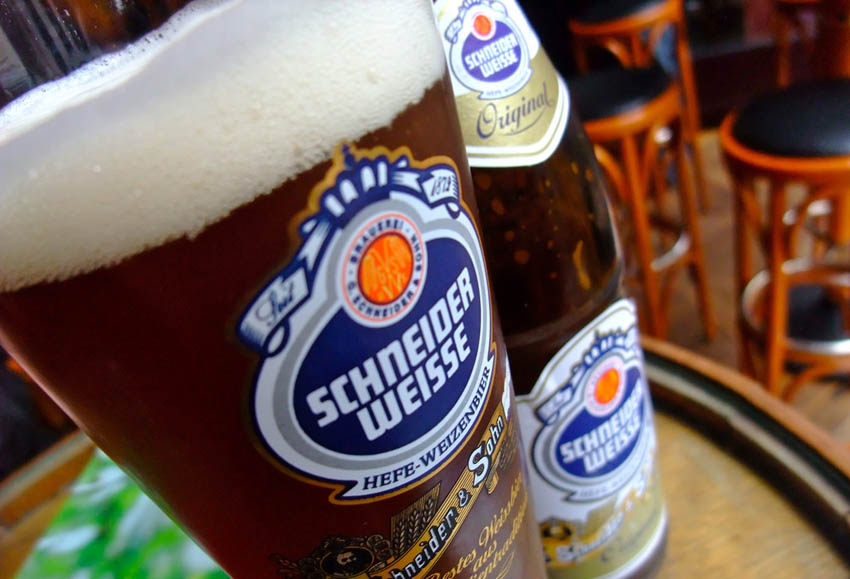 Famous in Belgium and Germany, both Witbier and Weissbier mean “white beer”, referring to the characteristic pale colour that results from the high wheat content typical of the style. The major differences between the regional styles lie within the notes of spice and fruit present in the Belgian variety. Due to the complex ester and flavor compounds the yeast produce, these beers are best enjoyed at a slightly warmer temperature, with their fruity and zesty flavor still making them a perfect match for summer.
Commercial Examples: Hoegaarden Witbier, Schneider Weisse Weissbier

Saison, or “season” in its native French-speaking region of Belgium, is one of the original summer beers. Brewed in the winter to avoid spoiling, each farmhouse brewed their own recipe with spices and other local ingredients making it hard to pin down definitive characteristics. Workers of the farm would be entitled to a portion of saison each day to quench their thirst in the hot summer sun. While modern saisons have held true to the spicy, fruity nature of their ancestor, the beer has moved to a higher %ABV, making it a beer for cool evenings, rather than hot workdays
Commercial Example: Saison Dupont

Session/Day-Time IPA: The last 10 years have seen an astronomical rise in the popularity of the India Pale Ale (IPA) style. Often fermented to over 7% in ABV, it can be hard to drink more than a few in a single sitting. To keep consumers happy in the summer with the hop explosion of an IPA, many craft breweries are offering “Day Time” or “Session” IPAs that are lower in alcohol. Sitting more comfortably in the 4-5% range, session IPAs can be just as delicious and refreshing as their bigger siblings but without the debilitating side-effects.
Commercial Example: Lagunitas Day-Time IPA 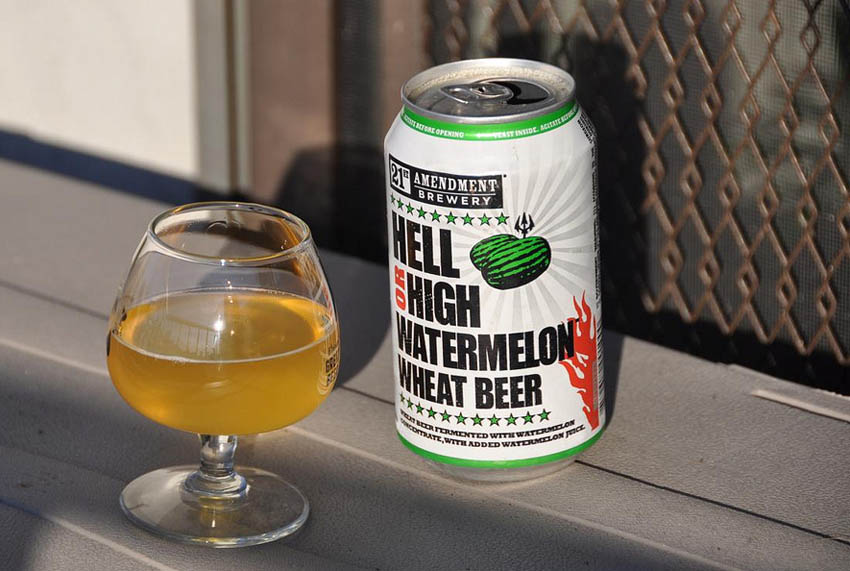 Fruit/Vegetable Beers: Another popular style in the last few years that has come out of craft breweries is fruit beer. While definitely not a new idea - Belgian lambics have been around for centuries - these beers are brewed specifically with summer in mind and include ingredients such as watermelon, grapefruit, and lemons. Though sometimes derogatorily referred to as “prisoner’s hooch”, the popularity of these beers among otherwise non-beer drinkers is a testament to their pleasant taste and refreshing nature during hot summer weather.
Commercial Example: 21st Amendment Hell or High Watermelon

Thank you for the article! I like Pilsners, but my homebrew Pilsner has a Saaz flavor that ruins it for me. I will try to back off the hops, but I'm curious if others have experienced this issue with Saaz and substituted other hops.
I think one to include in this list would be the historical Grodziskie/Gratzer. The availability of the Weyermann Oak Smoked Wheat malt make this an easy one to brew now. 100% Oak Smoked Wheat, a single dose of Saaz at 60min and a neutral yeast like German Ale. A step mash helps, but is probably not necessary.
I made one earlier this year that came out light, spritzy, slightly fruity with a hint of smoke on the nose and the palate. I've found it to be extremely refreshing after working out in the yard on a hot day.
I brewed something inspired by grodziskie for a co-worker, but it used beechwood smoked malt and white wheat instead of oak smoked wheat. I intend to try the authentic 100% oak smoked wheat version, but they loved it how it came out and want more, so why change what I did.
Perhaps when I finally have a free fermenter.
Summer is definitely one of the times when I like wheat beers, and fruit beers the most. I love Hell or High Watermelon during vacation...it's an awesome "just came off the beach" beer!
I would also throw the Berliner Weiss style's hat into the ring for a great summer beer...the generally low ABV, and the refreshing tartness is really nice when it's hot out. Combining the Berliner with fruit is also awesome...love me some DFH Festina Pesche while on vacation too (and it also makes a nice base for a pretty unique margarita)!
Supposedly the beechwood smoked malt is a lot more intense and astringent that the oak smoked. My Grodziskie's smoke characteristic is there, but subtle. I love it. I might be replacing cream ale in my summer rotation. The all-wheat mash can be challenging, but I used a ton of rice hulls and had no problems.
There were so many great styles to include, many of which are covered in this awesome website: http://www.germanbeerinstitute.com/styles.html (warning: don't visit unless you are prepared to go down a long rabbit hole of beer research, there's a ton of great content)
There are several other "noble" varietals that work well in pilsners -I think you just have to know which flavour you like. You could also skip your bittering addition in favour of a first wort addition may serve to tone down the "Saaz flavor" for you.
In addition to Sazz I have used both Ultra and Perle with great success. You could try Safire too.
Nice article. It's worth mentioned though that kolsch isn't fermented at near-freezing temperatures. Typically its fermented at cooler ale temp, 58-63F, but even as high as 70F.
Very nice style overview! All excellent choices and good examples of the kind of beers I'll be drinking this summer (though I echo the sentiment above regarding Berliners). Nice work.
I am going to break the rules and go to Cologne and brew a beer that is not a Kolsch.
You must log in or register to reply here.
Share:
Facebook Twitter Reddit Pinterest Tumblr WhatsApp Email Link