Did you hear about the kidnapping in town?? … they woke him up.

I'm the world's worst joke teller. Can never remember the punchline.
But here's one from the back of Boy's Life magazine that I forced myself to memorize:
Knock, Knock
Who's There?
Doris
Doris who?
Doris locked, that's why I'm knocking.
Never fails to crack up a certain age of Cubscout. 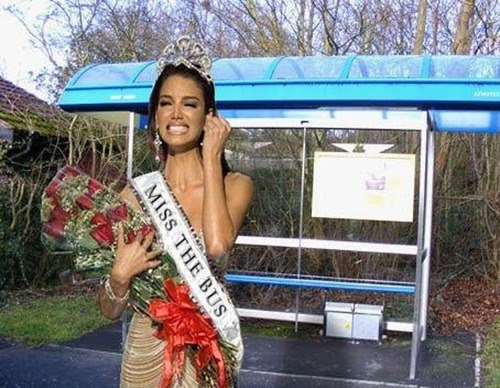 I was driving my car down a side street the other day when all of a sudden this cat jumped out in front of me. I hit the brakes, but I heard a thump, so I stopped. There was the cat lying right in the road. It was still alive, but I apparently had run over its tail and the force of the tire had cut it off.

A lady came running out of a house screaming, "You killed my cat!!"

I told her, "No, he's OK., except for the tail, and I'll fix that." I went into the trunk of my car and got out a roll of duct tape and taped the cat's tail back on.

The lady immediately blushed and called the cops. A cop showed up and immediately gave me a ticket. Boy, was I pissed off. I had to go to court, and was convicted. What a bummer. All for retailing ***** in a residential area.
OP

I LIKE TO SPEND EVERY DAY AS IF IT’S MY LAST.

Staying in bed and calling for a nurse to bring me more pudding.
OP

I HAVE AN ADDICTION TO CHEDDAR CHEESE.

But it’s only mild.
OP

WHY DID THE SCARECROW WIN AN AWARD?

He was outstanding in his field.
OP

I WAS SITTING IN TRAFFIC THE OTHER DAY.

Probably why I got run over.
OP

WHEN IS YOUR DOOR NOT ACTUALLY A DOOR?

… unless everyone gets it.
OP

COSMETIC SURGERY USED TO BE SUCH A TABOO SUBJECT.

Now you can talk about Botox and nobody raises an eyebrow.
OP

HAVE YOU HEARD OF THE BAND 923 MEGABYTES?

Probably not, they haven’t had a gig yet.
OP

WHAT’S THE DIFFERENCE BETWEEN A DIRTY BUS STOP AND A LOBSTER WITH BREAST IMPLANTS?

One is a crusty bus station and the other is a busty crustacean.
OP

HOW MANY TICKLES DOES IT TAKE TO MAKE AN OCTOPUS LAUGH?

Schlenkerla said:
HOW MANY TICKLES DOES IT TAKE TO MAKE AN OCTOPUS LAUGH?

Those are all pretty good! 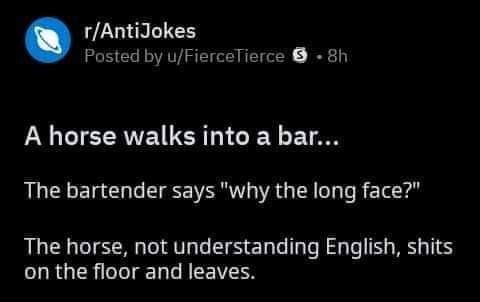 PianoMan said:
Those are all pretty good!
Click to expand...

As a golfer it's always good two wear two pairs of slacks...

Just in case you get a hole in one!
OP

WHEN THE TWO RABBIT EARS GOT MARRIED, IT WAS A NICE CEREMONY.

But the reception was amazing.
OP

A CHICKEN COUP ONLY HAS TWO DOORS.

If it had four, it would be a chicken sedan.
OP

WHAT DID BLACKBIRD SAY WHEN HE TURNED EIGHTY?

I recently bought a toilet brush...

There went my " I don't know but his face sure rings a bell" Quasimodo joke. 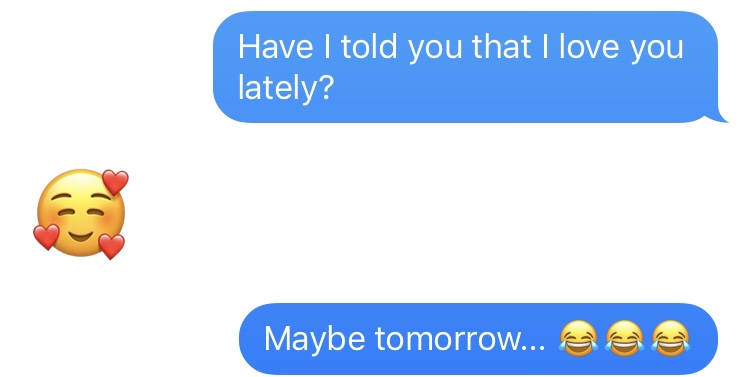 If you don’t hear back from me, at least you’ll know why...

You guys want to hear a good poop joke?

So I brewed a SMASH beer, but used two malts... 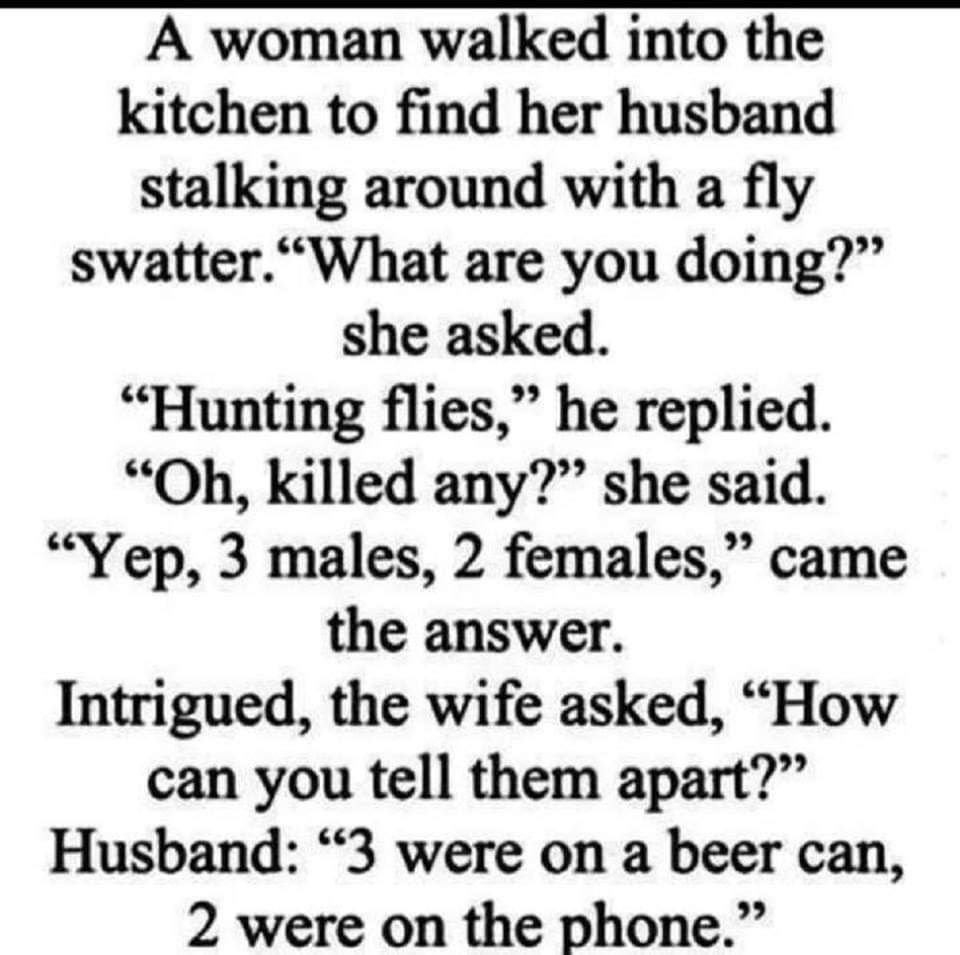 What do you call a cow that eats your grass?

Why do fish live in saltwater?

Because pepper makes them sneeze!
OP

What did the fisherman say to the magician?

What are the two things you can’t have for breakfast?

What did the limestone say to the geologist?

Don’t take me for granite!
OP

What do you get if you cross a frog with a rabbit?

What do you call a funny mountain?

Why are fish so smart?

They're always in schools.
OP

What’s worse than finding a worm in your apple?

Finding half a worm.

Little Johnny sat down for breakfast, and his Mother asked, “Have you done all your chores already?” With a frown on his face little Johnny replied no and left the table and walked outside.
He kicked one of the chickens while throwing the scratch. He kicked a pig out of the way putting water in the trough. He elbowed the cows while giving them hay.

Little Johnny sat back down at the table, and mother put a bowl of dry cereal in front of him? “What, no eggs and bacon?” Johnny asked his mother to which she replied, “I saw you kick a chicken, so no eggs for a week, then you kicked a pig- no bacon for a week, and you elbowed a cow, so no milk for you for a week.”
Just then Johnny’s father kicked the cat on his way into the kitchen. Little Johnny looked at his mother and said, “Should I tell him?” 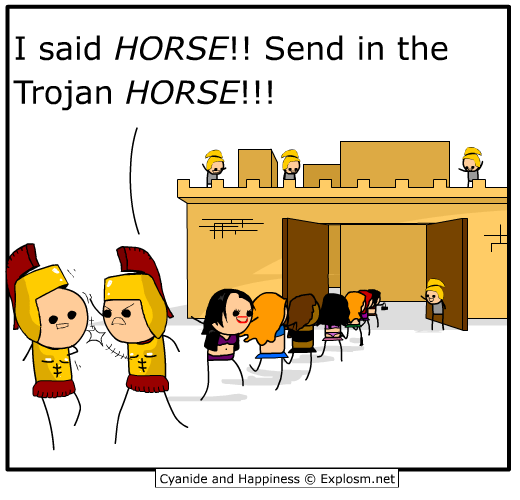 Praise The Lord...
During the service, the pastor asked if anyone in the congregation would like to express praise for prayers which had been answered.
A lady stood up and came forward. She said, "I have a reason to thank the Lord. Two months ago, my husband, Jim, had a terrible bicycle wreck and his scrotum was completely crushed. The pain was excruciating and the doctors didn't know if they could help him."
You could hear an audible gasp from the men in the congregation as they imagined the pain that poor Jim experienced.
She continued, "Jim was unable to hold me or the children and every move caused him terrible pain. We prayed as the doctors performed a delicate operation. They were able to piece together the crushed remnants of Jim's scrotum and wrap wire around it to hold it in place." Again, the men in the Congregation squirmed uncomfortably as they imagined the horrible surgery performed on Jim.
She continued, "Now, Jim is out of the hospital and the doctors say, with time, his scrotum should recover completely."
All the men sighed with relief.
The pastor rose and tentatively asked if any one else had anything to say. A man rose and walked slowly to the podium.
He said, "I'm Jim and I would like to tell my wife, the word is "sternum."
You must log in or register to reply here.
Share:
Facebook Twitter Reddit Pinterest Tumblr WhatsApp Email Link