This is my first post and I'm relatively new to brewing- just started earlier this year and quickly transitioned to all-grain brewing. The last 8 or so batches I've done, I've made yeast starters.

Last week, I made two starters for a 10 gal batch I'll be brewing and splitting next weekend to see what difference the yeast will make to the beers. The starters were both made with new yeast pouches and DME using the same process.

The first starter was WLP001 and looks completely normal- creamy white in color once cold crashed. The second starter was a WLP090 (San Diego Super Yeast). When I cold crashed that one, it settled into two distinct layers. The lower one looks like the cream-colored yeast cake I'm used to. Above it, is a gray-ish colored layer.

My question is- what is the gray-ish layer? Is it still usable? I'm not sure if this is normal since I'm still relatively new to yeast starters.

The picture below shows the WLP001 on the right and the WLP090 on the left with the gray layer I'm asking about. 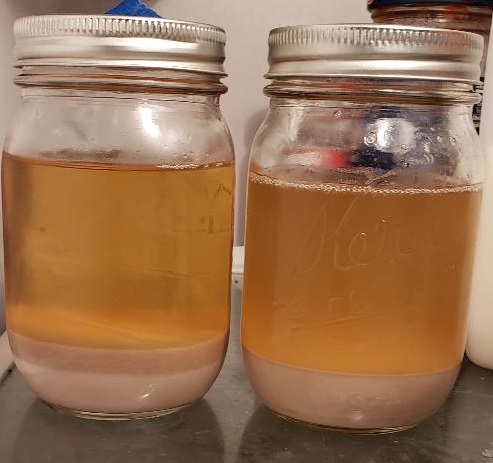 So, I'm thinking this may be completely normal?

Probably something that precipitates from the wort (protein etc.) under the conditions of this starter (OG, eventual pH, boil temp & time). I do not think it is anything to worry.

I'm with @ESBrewer , probably something specific to that yeast; perhaps it finished faster and you have a more "complete" beer.

I always toss my entire starter in the fermenter; I'd have no issues tossing either of those in, no decanting.
OP
M

Yeast layer in my glass, as a starter?