When I first started brewing I used a kit to guide me through the brewing process. The instructions seemed very simple which was nice since I was still learning about the equipment and how the brewing process worked. I steeped a small sock of grains for 20 minutes, poured in the liquid malt extract, boiled the hops, pitched a dry packet of yeast, and fermented for exactly 2 weeks as instructed.
I now thought I could make any kind of beer by following this same blanket process. However, as I researched my new hobby more I found that different ingredients and styles of beer suggested using alternative or additional steps. One of these conflicting suggestions was to rest the mash at a lower temperature than the 150ºF – 165ºF range I had seen everywhere and grown to trust. In my head this was the one and only optimal range to brew beer. Why would I waste time at another temperature if this is the only range that gives me the sugars I need to make beer? 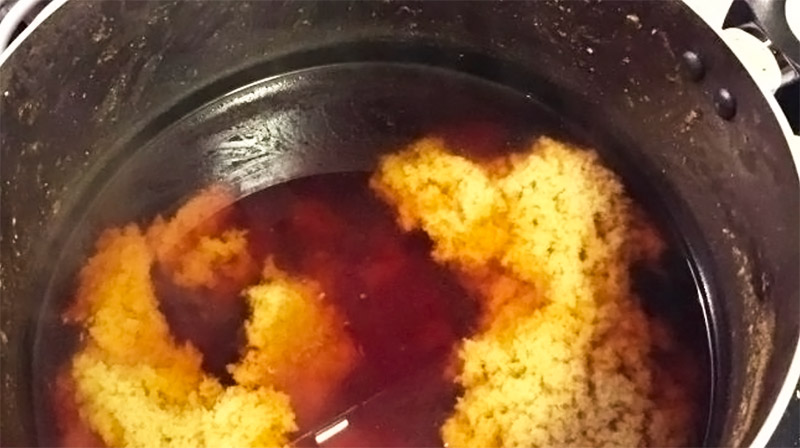 What Happens During a Beer Mash?

During the mash, starches are converted into sugars by an essential process called the saccharification rest (saccharide = sugar). Unless you can live your life drinking non-alcoholic beer, it’s important to have sugar so your yeast can make alcohol. Most people mash at a single temperature between 150-160ºF since that’s easiest and the most efficient range for starches to be converted into sugars. In this temperature range, there’s enzymes in the malts called amylases that “wake up” and start disassembling chains of sugar so the yeast can eat it. Each link of the chain is a sugar molecule, while the chain itself is called a starch. A simple starch that is a straight chain is an amylose. A more complex, branched starch (built from several amylose chains) is called an amylopectin. There are 2 main enzymes responsible for stripping sugars off of these starch chains. Beta amylase works best between 131-150ºF and is only able to work on the end links of the chain. Therefore it must break off 1 sugar molecule before it can work on the next. This is slow on amylose since there are only 2 ends, but on an amylopectin it can attack the end links of every branch sticking out.
The other enzyme, alpha amylase, works best at 154-162ºF and can break the chains anywhere in the middle. This helps break an amylopectin into smaller chains that can be worked on more efficiently. Neither of the amylases can strip every last piece of sugar off of an amylopectin though. They will both leave a little sugar surrounding the junction where 2 chains intersect. This remaining starch that can’t be broken down further is called a dextrin. Homebrewer’s often refer to these as un-fermentable sugars and count on them to give the beer body. This rest is typically performed for 60 minutes, but can vary from 30-90 minutes. Although the saccharification rest is the most important for making beer, there are other rests that can play key roles. 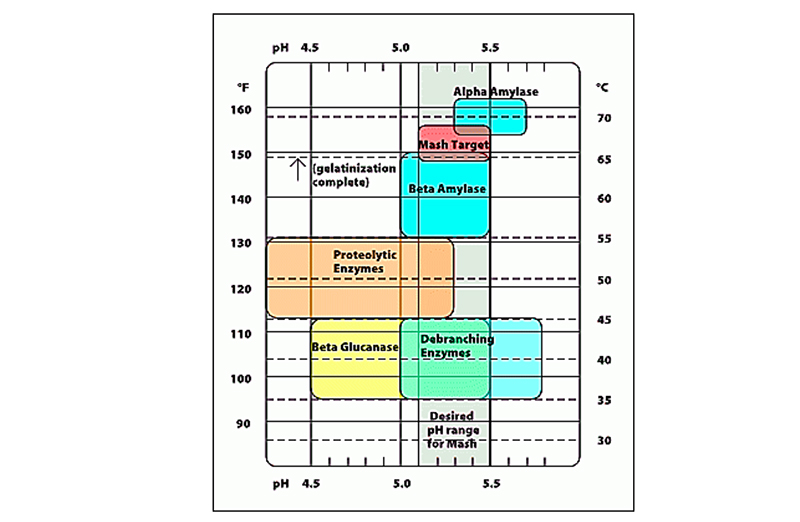 Protein Rest: Most of the malts that are used today are fully modified. This means that the proteins in the malt were fully broken down during the malting process at the supplier. So all the brewer needs to do is mash the malts and all of its nutrients are available to help you make good beer. There are ingredients though that have not been modified and therefore are not ready to contribute to your beer easily. Wheat, barley, rye, and oatmeal are some examples of unmalted grains that need extra work to make their proteins available. You can do this by performing a protein rest for 20-30 minutes between 113- 131ºF. At this temperature 2 main enzymes (referred to as proteolytic enzymes) go to work. Peptidase helps extract nutrients that are beneficial to the yeast, while protease breaks large proteins into smaller proteins to improve head retention and reduce chill haze. A protein rest is only necessary if you’re using partially modified malts (uncommon) or your grain bill consists of more than 25% of unmalted grains. Using this rest otherwise can damage your beer by breaking up the proteins you want for body. This will leave you with a thin beer that has no head retention.
Beta-Glucan Rest: The unmalted grains mentioned for the protein rest (wheat, barley, rye, and oatmeal) also drive another rest. Personally I associate this rest with wheat beers but it still applies to any beer with large amounts of unmalted grains (more than 25% of the grain bill). The beta-glucan rest takes about 20 minutes and happens at 98-113ºF. Once again, 2 enzymes do the heavy lifting. Beta-glucanase and cytase work together to break down gummy beta-glucans. Without this rest beta-glucans will turn your mash from an oatmeal consistency into something closer to dough, which makes lautering very difficult.
If you’re only using a small amount of unmalted grains, you can try lautering at 165-170ºF (mash out) instead of a beta-glucan rest. It may be stickier than normal but should work fine. My picture to the right shows a good example of how many proteins remain in your wort even after lautering. This shows cooled wort from a typical all grain batch using only modified grains. A lot of the junk can be contributed to the hops, but there’s also a good amount of proteins from the hot break (boil) and cold break (chilling) holding all of this together to create a hoppy coral reef. The gummy proteins from unmalted grains create a similar condition in your mash tun. They hold your grains together so well that wort can’t filter through during lautering.
The “doughing in” rest occurs at nearly the same temperatures as the beta-glucan rest. This method involves a 20 minute rest between 95-113ºF (104ºF is optimal). At these temperatures, there are enzymes (referred to as debranching enzymes) that can break down the small amount of dextrins that remain from the grain malting process. At this point there aren’t many dextrins to work on though, so the benefits are small. You may be able to improve your yield by a couple gravity points. 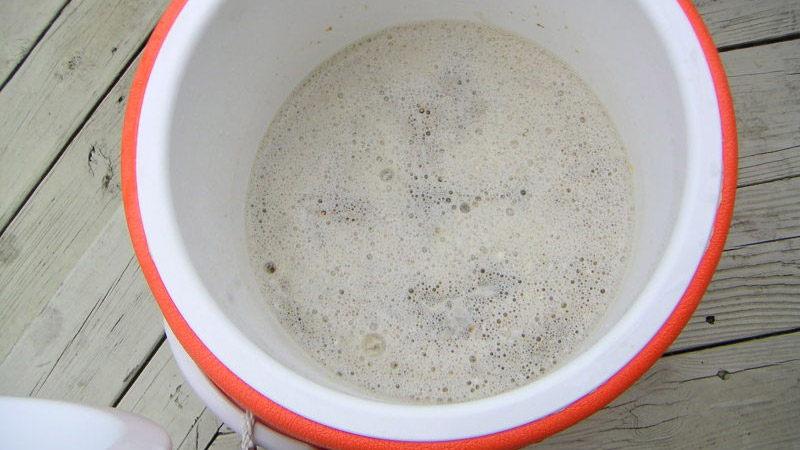 Acid Rest: Starting at barely more than room temperature, the acid rest is the lowest temp rest which occurs at 86-126ºF. An enzyme called phytase works at this temperature to break down a salt called phytin found in the grains. This yields calcium, magnesium phosphate, and phytic acid which lowers the pH of the mash (acidifies). This was common centuries ago to acidify mashes made of only light malts, but today we’re able to lower the pH by adding minerals and specific acids, such as lactic acid, instead. That’s a good thing since the acid rest can take several hours to lower the mash to the proper pH range.
Step mashing isn't always required, but it can help your beer if you hit some of the sticking points addressed above. Now you have the tools to solve potential issues caused by high mash pH or a large portion of unmalted grains. You can also control the body by harnessing beta and alpha amylase activity.

Very good write-up. A balance between "holy cow that's way too scientific and nerdy", and a good practical explanation of what's happening so you can decide for yourself the benefit of each step.
Glad you enjoyed it!
Nice article- thanks. I only step mash my hefeweisen. A ferulic cid rest at 110F for 10 minutes will accentuate the banana notes. Same principles apply.
\\Greg
You must log in or register to reply here.
Share:
Facebook Twitter Reddit Pinterest Tumblr WhatsApp Email Link

Going All Grain On a Budget (w/ real sparging step)

Going All Grain On a Budget (w/ real sparging step)