I have just made my first starter and I use a starter dme from my LHBS. It was 2 oz of dme and I used 3 cups of water, boiled the dme for about 10 minutes cooled it down to 70* (white labs california ale) shook it up, pitched the yeast and capped it with sanitized foil. I then shook the growler a put the starter in a couple of times before I turned in for the night and again in the morning when I woke up. About 24 hours later I didn't see any action going on. I still don't 2 days later but there is a small cake at the bottom of the growler. Did I do this starter correctly and is there any tips and tricks from the pros that you can tell me? I have looked all over and there is so much to take in!

You're looking for "activty" and ignoring the obvious.

It doesn't matter one blip in your fermenter or your starter flask if the airlock bubbles or not (if you are using an airlock and not tinfoil if you are using tinfoil, you aren't getting bibbling anyway,) or if you see a krauzen. In fact starter fermentation are some of the fastest or slowest but most importantly, the most boring fermentations out there. Usually it's done withing a few hours of yeast pitch...usually overnight when we are sleeping, and the starter looks like nothing ever happened...except for the little band at the bottom. Or it can take awhile...but either way there's often no "activity" whatsoever....

I usually run my stirplate for the first 24 hours, then shut it down, if you are spinning your starter it is really hard to get a krausen to form anyway, since it's all spinning, and there's often a head of foam on it from the movement.


All that really matters is that creamy band o yeast at the bottom. 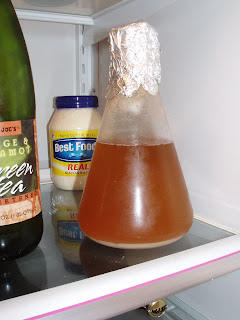 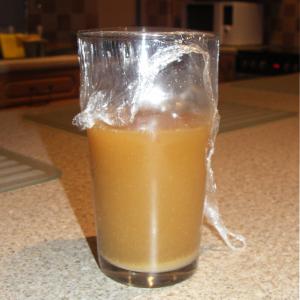 As it is I've only ever seen two or three krausens actually on my starter (one blew off a bunch of krausen and knocked the tinfoil off the flask,) and the evidence of one on the flask at the "waterline" once. But I've never not had a starter take off.

Look for the yeast at the bottom, don't worry what it looks like on top.

If you have yeast on the bottom....that's all you really need.

If it looks anything like that, your are ready to either feed it again, or use it.
OP
OP

Thanks again Revvy for the info! Although I am using a dark colored growler I can see I definitely have the band at the bottom! How would I go about feeding it again?

R
How long can a starter last
2