I was at Starbucks today and ordered the nitro cold brew. While waiting for my drink I noticed the nitro faucet was different from any I'd seen before, but I can't find them anywhere online, so I thought I'd ask here. Can anyone tell me what brand this is? 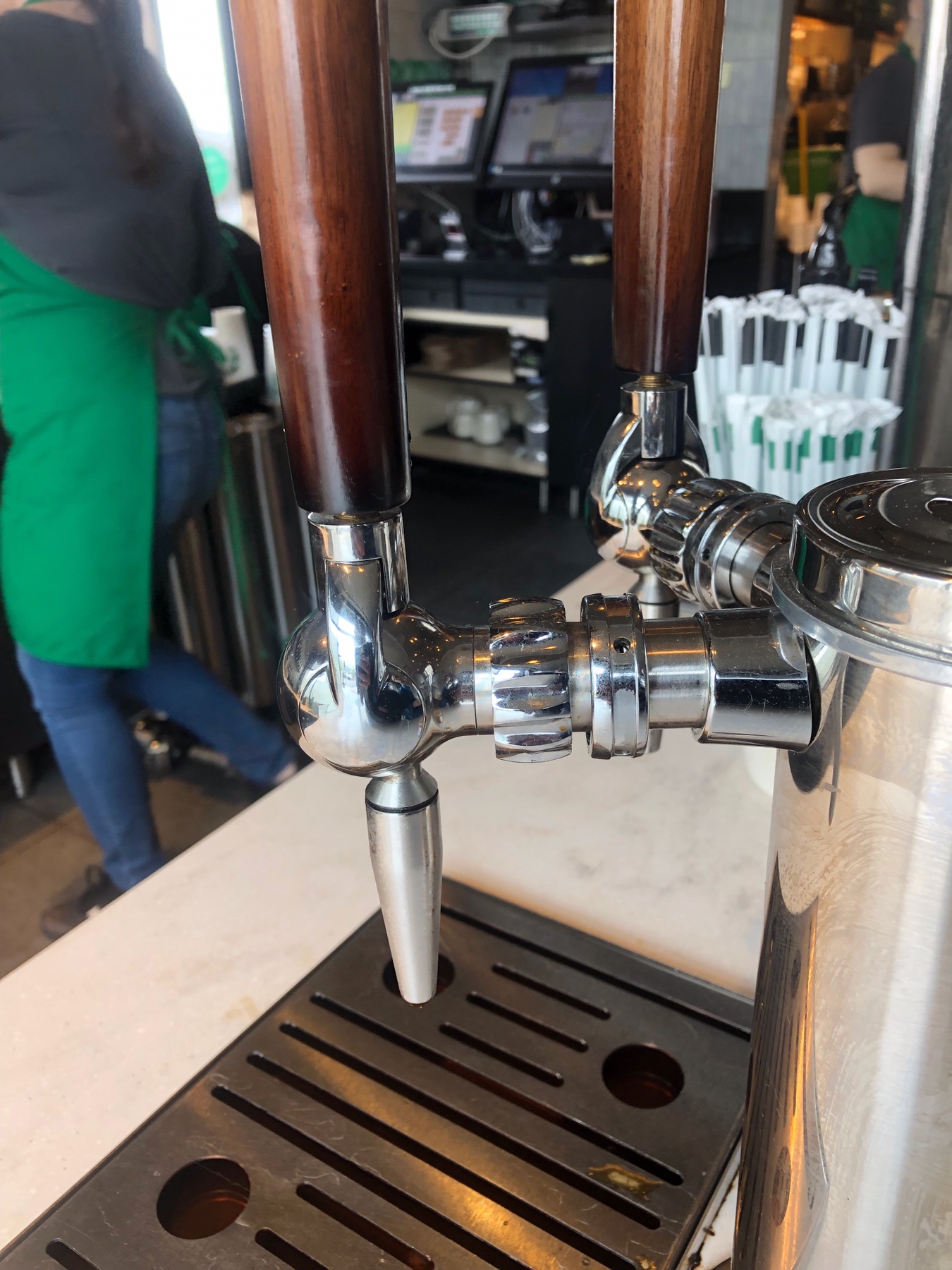 Looks like a ROTOTAP w/ flow control and stout spout.

Ooo thanks for that! Looks about right. Can't find the stout option though; maybe it's a Starbucks exclusive?

My daughter used to work at Starbucks. I'll see if she can find out .

eulipion2 said:
Ooo thanks for that! Looks about right. Can't find the stout option though; maybe it's a Starbucks exclusive?
Click to expand...

"
New product development and brand innovation is at the core of our business.

We passionately seek adventurous, customer driven projects that allow us the latitude to develop new and novel innovative solutions that enhance our customers on trade brand differentiation, inspires the consumer to select their brands and increases their revenue growth through improved dispense quality & performance.

We believe that brand innovation drives revenue and differentiation in a saturated market.

We believe that speed to market reduces product life cycles, enhances our customer’s margins and ensures they can rapidly develop their brands to the emerging market needs.

We believe that brand innovators win!

Our aim is new product concept to brand delivery in less than 6 months!

Huh. Probably a slim chance of laying hands on one, but I like the design. It still might be worth an email; worst that can happen is they say no. It looks like it would be less likely to wear out/leak like a standard nitro faucet diaphragm does (EDIT: I'm assuming the guts are based on the same design as the ROTOtap, just with a different spout.)

That said, I've had my nitro setup for a couple years now and still haven't used it, so if I'm thinking logically it's obviously not a high priority. Still, shiny and new, so I obviously need it!

I have the intertaps . Just a swap of the tip and I have a nitro tap. I hear ya on the how many times you use your nitro set up. At my pace its about once a year lol. I'm the same way with shiny new toys haha
OP

Jag75 said:
I have the intertaps . Just a swap of the tip and I have a nitro tap. I hear ya on the how many times you use your nitro set up. At my pace its about once a year lol. I'm the same way with shiny new toys haha
Click to expand...

I have a couple Intertaps and stout spouts as well. While I haven't used them (the stout faucets), I've heard mixed reviews. That said, it's the cheapest, simplest option for the occasional nitro brew. I also have a Micromatic stout faucet, for which they recommend not allowing the handle to exceed a 45-degree angle or else risk damage to the diaphragm. I've been looking at the Taprite model, which doesn't have that warning, but the ROTOtap (apparently) eliminates that concern, and the diaphragm, altogether.
Last edited: May 8, 2019

I can assure you they're awesome. I set my beer gas to 35psi . I get a nice solid minute cascade . I cant put up a video but heres a gif of it .

Nice! That's what you want to see!

eulipion2 said:
Nice! That's what you want to see!
Click to expand...

Heck yeah man . This beer got sucked up big time . My mom , who hates dark beer couldnt get enough lol

eulipion2 said:
I have a couple Intertaps and stout spouts as well. While I haven't used them (the stout faucets), I've heard mixed reviews.
Click to expand...

I sold my Guinness faucet when I got the Intertap ones.
OP

It's been a little over two years, and I'm bringing this one back. We bought a house and I'm finally getting the brewery set up after more than a year and a half! The built-in "beverage cooler" in the kitchen died, and we just replaced it with a kegerator; I had to promise the wife that it would be used primarily for coffee since I have an 8-tap kegerator in the basement.

I currently have an Intertap (RIP) on the kitchen kegerator, but I just saw a Starbucks commercial the other day that showed this faucet, and it's jumpstarted my obsession all over again.

So, has anyone seen one of these for sale? When I first emailed the ROTOtap people about it my email went unanswered, and I've never seen one anywhere other than Starbucks. I'm beginning to resent Starbucks for hoarding these awesome faucets!

There are all kinds of Rototap faucets but the ones with the apparent stout spout seem rare.
But I came across a service bulletin for that Rototap faucet here: https://www.multiplexbeverage.com/asset/?id=fobwou&regions=us&prefLang=en
Check out the pictures - aside from the handle that's definitely the faucet pictured at the top of this thread.

Ok, fine - you can change your region to the UK, reload the page, et voila!
But it's just the generic version shown - can't seem to get the stout faucet to show up...
Last edited: Thursday at 11:46 PM
OP

Following the link in post #4, the TRUpour fonts seem to have the nitro variant installed, but that's about it. The "Related Products" links to the standard edition. Don't these people realize that homebrewers, and the craft beer industry as a whole, like shiny objects? C'mon, Multiplex - get it together!
You must log in or register to reply here.
Share:
Facebook Twitter Reddit Pinterest Tumblr WhatsApp Email Link

stout faucet, but no nitro