So I finally got around to buying a propane burner, just a cheap turkey fryer setup from Home Depot but now that has me wanting to build a brew stand that I can roll in and out of my garage. I'm kinda limited on space though and I was considering a stacked design made out of wood.

I've attached a very rough version of what I'm imagining in my head. Its not to scale or anything just done with MS Paint.

My main question is though, would I see any issues in the way of tipping over? and would boiling under the wood platform for the HLT cause issues? I'd definitely consider sealing it like wood decks get. I'd probably build out of pine or even pallets if I can source them.

Side note: I had no idea just starting home brewing would make me want to build so many things.

This would be for 2, 2.5 and 5 gallon batches and using coolers for the mash tun and HLT
T

If you head over to the "show us your brew sculpture" thread there are a ton of ideas and some in wood, a lot of people use wood and have them not burst into flames. Sorry I can't help more I built a 3 tier with angle iron.
OP

I was just over there lol
I actually think I may have solved my question by simply moving the BK to the MT spot then the MT would move to the top and the HLT would be on the bottom. I'd use a pump to run sparge water up to the Mash Tun. I'd have to build a shower head type thing and fly sparge but I think I like that plan more anyway

Sorry, I think I just needed somewhere to brainstorm "outloud" about this and none of my friends brew The stacked 3 tier is a great design
OP

I think this is the design I've settled on. I may start building this weekend but this will probably be a bit of a lengthy project for me as I'm also acquiring things to start doing 5 gallon batches at the same time.

This is a pretty rough draft but the orange cylinders will be typical HD coolers, the grey cylinder is my cheapo burner and kettle and the white cylinder is the propane tank (there will be a firewall on the platform under the burner) I'll heat mash water in the kettle and gravity feed it to the the mash tun, mash in, then move the tun to the top tier. Start heating sparge water and gravity feed it into the HLT. Then I'll pump my sparge water up to the the mash tun and gravity wort into the kettle. The idea is to get my kettle high enough that I can gravity into the fermenter. that way the only full heavy things I am lifting will be the mash tun and the full fermenter. This thing will also be on casters so I can roll it around. I'll probably throw some cup holders and stuff on it and down the road a bit I may throw a hinged shelf at one end that will hold a grain mill.

I guess I can turn this into something of a build thread. I know there are at least a dozen or more of these but what the hay. Here's my take on it. I updated the "CAD" ideas to better reflect the actual dimmensions but I'm not expert and it was TinkerCAD for 3D printers so there were some scaling issues and the some of the dimensions can be ignored. 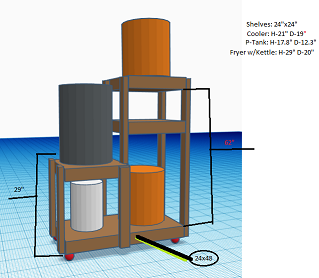 Basically I gave each section a 24x24 inch square. So the bottom platform is 24x48 and the top two tiers are 24x24. The middle shelf will be too but that won't be as important. The frame itself should stand about 6ft tall after the wheels are on which will put the boil kettle at a height where I can gravity feed right into the fermenter.

I started building on Saturday and got each of my platforms done. Cedar 2x4s supporting some pine (I think 1x6s). I chose these because the 1x6s have been laying around the house since I bought the place and were just taking up space. The cedar 2x4s were because thats the only 2x4 that Home Depot sold in a six foot length and I'm transporting this stuff in a VW Rabbit. 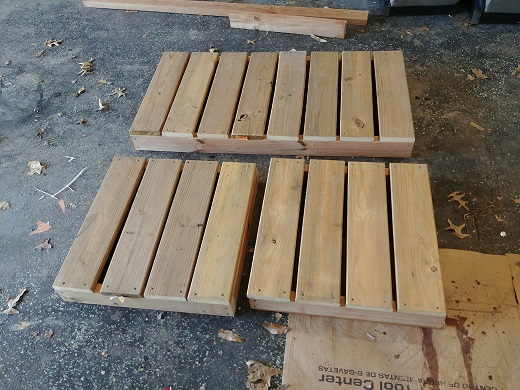 Standard deck screws holding everything together and just kind of eyeballed the spacing on the 1x6s. Yes I know some of the boards are warped. Do I really care? Not really. This thing isn't meant to look pretty, It's meant to serve a purpose. Besides, once its loaded up with all my gear, I don't really think anyone will notice the slightly warped boards.

Here's a shot of the second tier resting on the propane tank. It'll be raised 3-5 inches from the top of the tank so I have enough room to reach my arm in and shut it down. 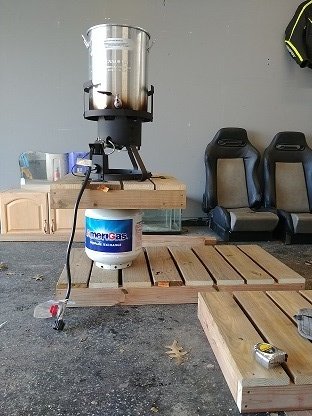 ignore the soot on the kettle, it was a windy day when I was building this and doing my test boil.

This week, I'll order my casters and mount those. I'll look into getting some sheet metal to build a firewall on the second tier. And hopefully I'll get to get it more together.

Keep your stick on the ice.

The stacked 3 tier is a great design
Click to expand...

Do you sell this or did you buy this somewhere?

I like the idea of having the MLT on top.

Took delivery of a bunch of goodies. A dip tube for the kettle, Sheet metal to build a basic heat shield/firewall, casters with locks that even lock the swivel, a small pump for pumping sparge water up to the mash tun and a dimmer switch to run flow control on said pump. 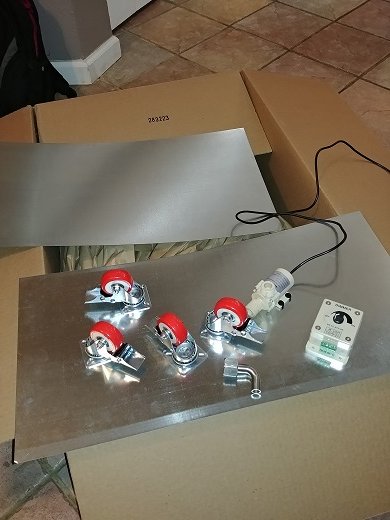 I also got a bit of progress in before work today, got my second tier attached with heatshield. Also got the smaller legs attached to the third tier (not pictured). I ran out of both wood and screws so this is where progress stopped. 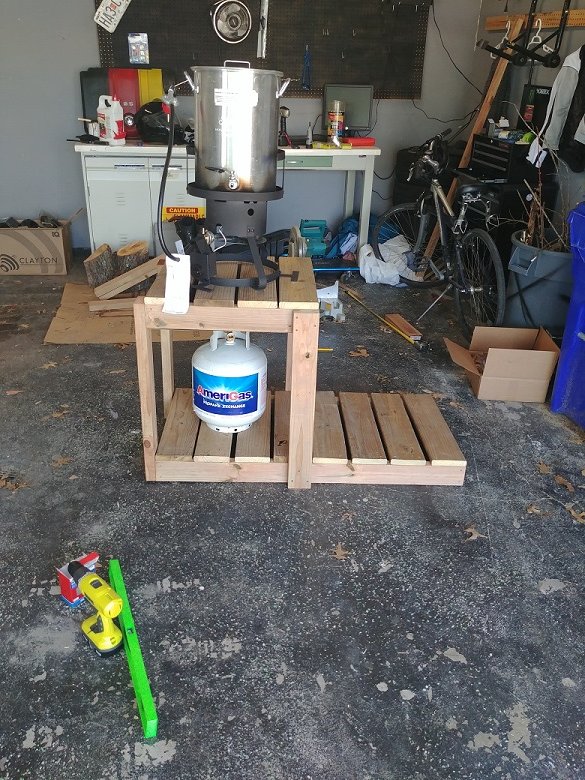 It looks a little funky with one leg on the front and back and two on the left side but I wanted to be able to easily slide the tank in and out. This method frees up 3.5 inches lol.

P.S. Please excuse my cluttered garage and work bench, I'm still working on my storage solutions. I moved in last October and some how brewing has taken priority over some household things.
OP

Well, it's been a busy week but this thing is all but finished. I picked up a bunch of silicone tubing, too much really, and a power strip. Tested my outlets to ensure GFCI functionality with the power strip. Got the dimmer switch wired up and screwed down. Second cooler to use for my HLT. Just not sure which one I want to use for which. 5 gallon coolers are big enough for 5 gallon batches of beer right? Especially if I'm not planning on anything with super high gravity?

anyway, here it is. I'm quite proud of this, despite it being kind of an ugly duckling. 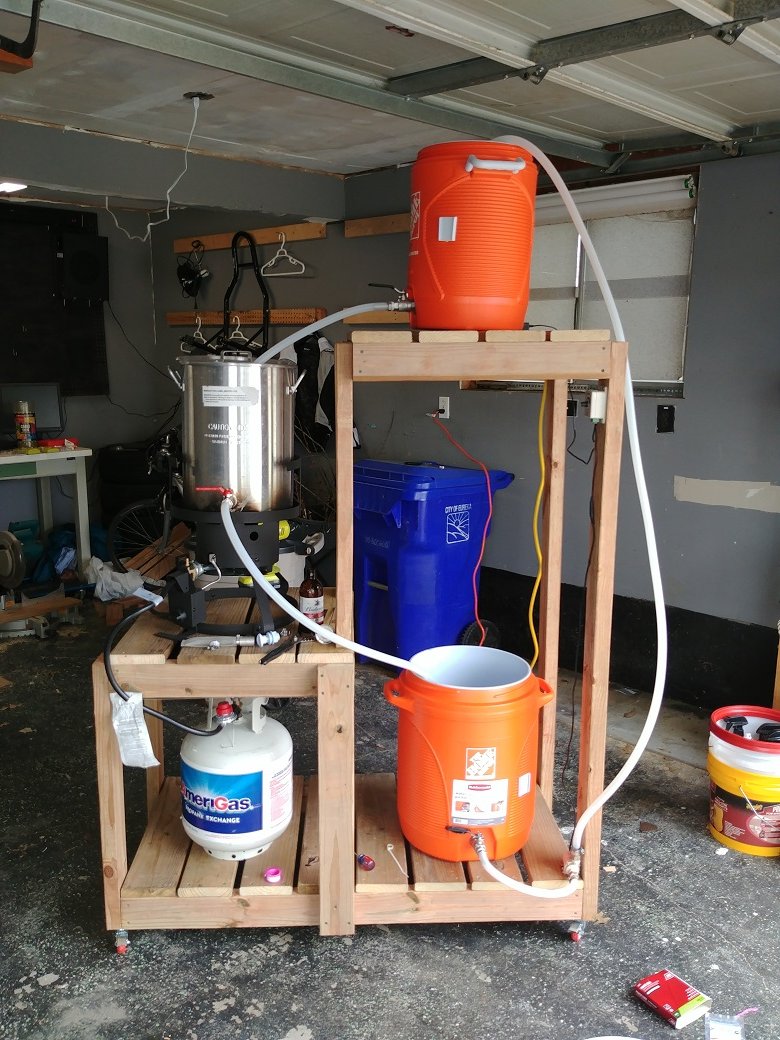 If you're batch sparging you can likely get away with a 5 gallon mash tun, it will be tight but it might work. I used a 10 gallon one to be safe. For an HLT it will probably work.

Nice rig, your idea is basically the same as mine but we used steel instead of wood. You'res looks really nice though.

I need a better picture. 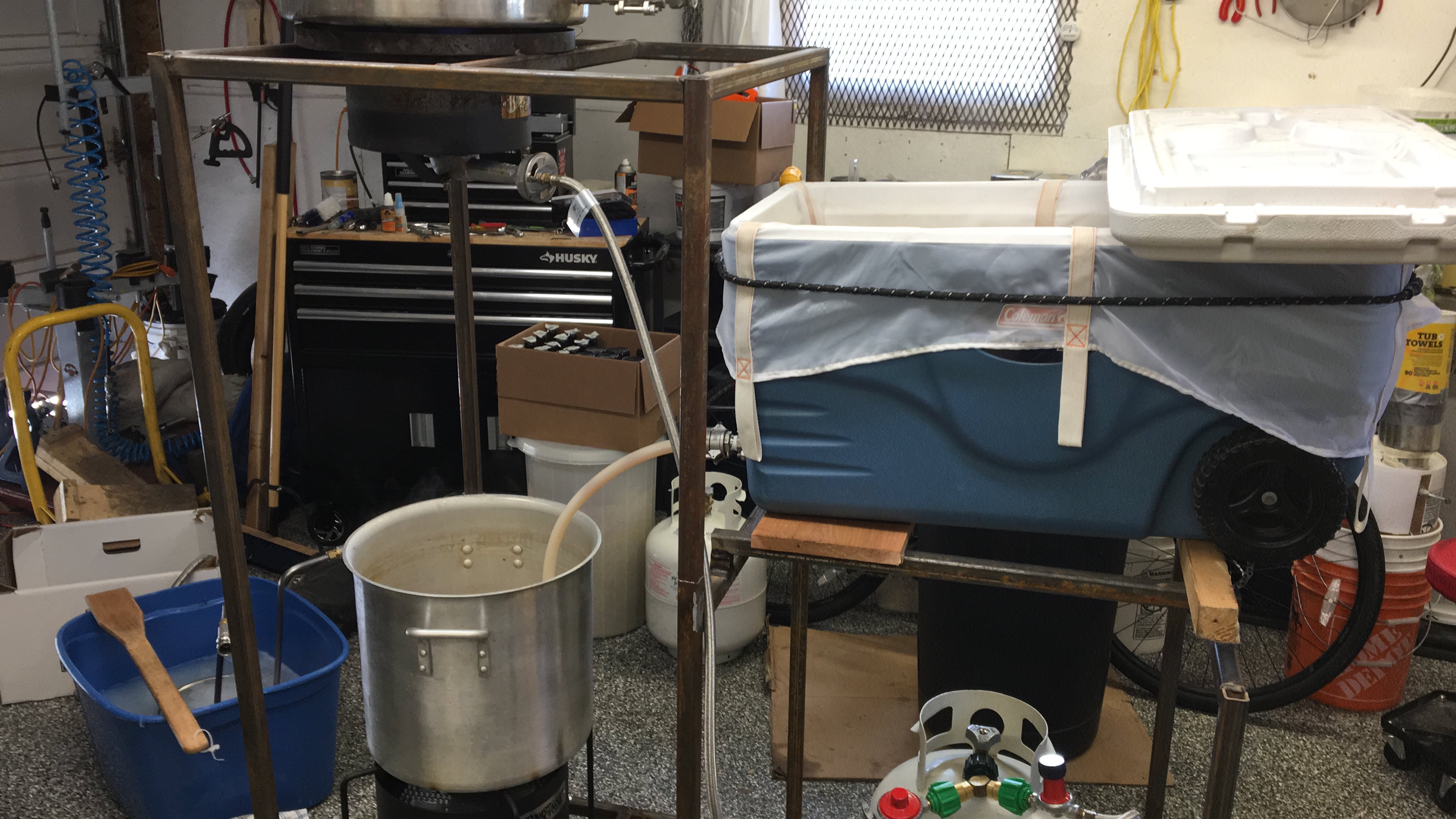