If you have done any shopping online for brewing supplies than you have probably seen advertisements for the SS Brewbucket from SS Brewing Technologies. That was where my exposure to them began. At nearly $200 for the base model and $225 for the Brewmaster version, you might be wondering if they are worth trading in the glass carboys. Read on and make your own opinions.
Full disclosure, I purchased one of these in 2014 and recently purchased another just two months ago. 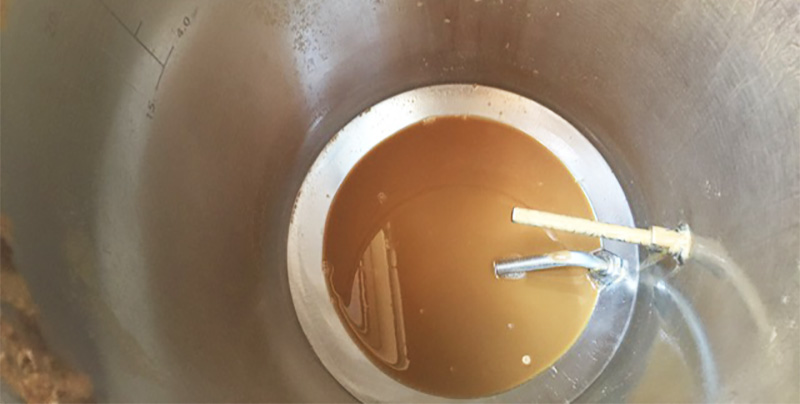 The Brewbucket is a replacement fermentation vessel constructed of food grade 304 stainless steel. The inside of which is laser-etched with volume markers, listing both liters and US gallons. It has a maximum volume capacity of 7 U.S. gallons from the where the lid attaches all the way down to the coned bottom. It is important to note though, that this is not a conical fermenter as the term implies. There is no quick dump for the yeast or the trub. Just a racking spigot for the wort. Where the cone bottom benefits brewers is that it lowers the contact surface area of your beer and the trub, reducing the chance for autolysis. It also serves a secondary purpose of keeping the trub/yeast from racking along with your beer.
The spigot is located just at the top of the cone, before it meets the wall of the vessel, but on the inside is a dip tube attached to the spigot. By twisting the spigot clockwise from the outside, one is able to rotate the inner dip tube 180 degrees. This lets you guesstimate what height you would like to rack from. I’ll admit, though touted as a feature, this one leaves me a little clueless as to how it can really benefit you without knowing the level of the trub.
The lid is also stainless steel with a silicone seal that is held in place by four tension clamps. This seal is incredibly easy to remove and clean, and equally easy to re-install. If, for some reason, you cannot figure out how to do this, there is a YouTube video available. But, it’s really simple.
A 1/2” hole is pre-drilled in the lid and a pre-drilled bung is included with either kit. These will accommodate common S-type and 3-piece airlocks(neither included). Optionally, for just under $20 extra, you can order a 90-degree stainless steel hose-barb which will screw into this hole, providing a secure attachment for a blow-off tube.
If you spend the extra cash to get the Brewmaster version of the bucket, you’ll also get a welded-in thermowell and matching digital thermometer. This thermowell extends approximately 4.5” into the bucket at about the 2.5 gallon marker, which I think is a great place to give a relatively accurate temperature reading during fermentation. The digital thermometer has a matching 4.5” probe to fit in the thermowell and it held in place by a rubber casing that squeezes over a hallowed nipple on the inlet to the well. Ive never had any problems with it falling off. 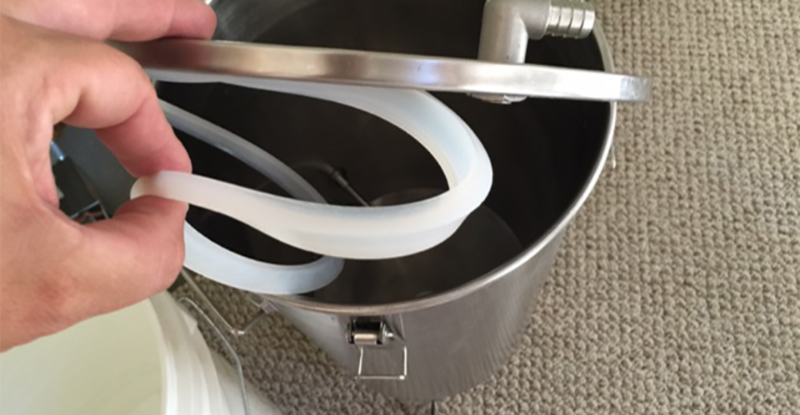 The brewbucket has the sanitation security of a glass carboy with the ease of cleaning a plastic bucket-style fermenter. However, unlike glass, this thing is built tough - you wont have to worry if your next brew is going to come with a trip to the hospital to stitch your hand up from an accidental shattering. And, unlike plastic, you’d have to scrub this thing with a fork to scratch the interior walls. Its really a breeze to clean after brew day.
I was skeptical about the welded in handles and their durability when carrying 6 gallons of wort, but over 30 batches in I have not had any problems at all. In fact, its much easier to carry having two handles than the one handle on a plastic bucket or those awkward carboy carrying products.
One of the bigger draws for me was also the range of accessories for the BrewBucket that seem to be coming out every few months. For example, they released a new lid that can accommodate both dry-hopping without removing the entire lid, as well as support their own glycol cooling system. Its pretty neat - if you have the money for it.

I have purchased the Brewmaster version of both of my buckets. While I like the idea of a thermowell giving me an accurate temperature from within the fermenter, I have found the included digital thermometer SS Brew Tech includes is cheap and not able to be re-calibrated. One of my thermometers shipped accurate to about a 1/5th of a degree. The second one I got, the thermometer is off by 2 degrees.
“Sure, two degrees”, some say. But, in fermentation that can mean the difference between just right and phenolic. I asked SS Brew Tech about this, they responded:
“It's not uncommon for various thermometers to have a degree or two of offset. In fact most digital thermometers are accurate within 1-2% of the actual temp, so keep in mind that it's virtually impossible for them to read perfectly in tandem at all times. Thermometers that have a higher degree of accuracy and resolution are typically very expensive, and used in lab environments. “
I understand what they are saying, but, I’ve bought $10 thermometers that let me re-calibrate for probe anomalies. Further, if its not going to be accurate anyway(by their own admission), why spend the extra $25 to get a bucket with thermowell and thermometer anyway? For a product that is marketed as being a step up from “wet t-shirt around a carboy dark closet fermenting”, they don’t seem bothered by having a sub-par temperature reading device.
One other issue I had to work around very quickly was the potential for suck-back using the blow-off tube and barb accessory. Without thinking, its very easy to rack into a hydrometer tube and not realize that you are simultaneously pulling in from the blow-off tube. Its a problem not uncommon in any fermenter with a racking port. The most obvious answer is, of course: “Switch to an airlock after heavy fermentation has finished.” The problem is the lid must be removed in order to have the accessory blow-off barb removed.
Another issue I have is the rotating spigot/racking port. The directions do tell you to only spin it clockwise when fermentation is ongoing. I couldn’t help but notice through testing, though, how easy the nut on the inside catches and loosens if one were to rotate the spigot counter-clockwise on accident. I have not done this yet, in fact, I haven't done much rotating when fermenting, period. But, still...
As a cautionary note, I did find that the initial cleaning process required a bit more elbow grease to remove machining oils than anticipated. Despite my best efforts, my very first fermentation, a hefeweizen, was sludgy brown on the first hydrometer rack. Sure enough, it also tasted oily. If you end up with one of these buckets, I thoroughly recommend to clean, clean, clean until a hard scrubbing with a white cloth yields no residue on every surface, including the inside of the lid. Follow this with a proper passivation using some Bar Keepers Friend. For me, it was definitely worth it. A brewing buddy of mine had a carboy shatter in his hands, which sent him to the hospital, putting him out of work for a while (without working hands, its hard to operate a television-show camera). I knew I wanted the ease of using a bucket, but without the sanitation issues inherent to plastic bucket-type fermenters. I’ve never had an infection before the Brewbucket, and I’m pleased to report that I haven't had one yet. Did I pay for that peace of mind? Probably.
Will it be worth it for you? That's hard to say. Its a very good unit though, and it works great for its primary purpose: fermenting your beer.