Thanks to El Nino and the mild winter, Spring is just a few drinks away. With Spring comes new growth, and with new growth comes new brewing ingredients. So grab your axe, let’s add some legitimacy to that lumberjack beard you’ve been sporting and let’s make a spruce beer!
Ok, so maybe the axe isn’t exactly necessary. The new growth tips from spruce trees are really what we’re after, and can be easily be picked by hand. But if you’re picking spruce in a public place or your neighbor's yard, at least wear a plaid flannel shirt. 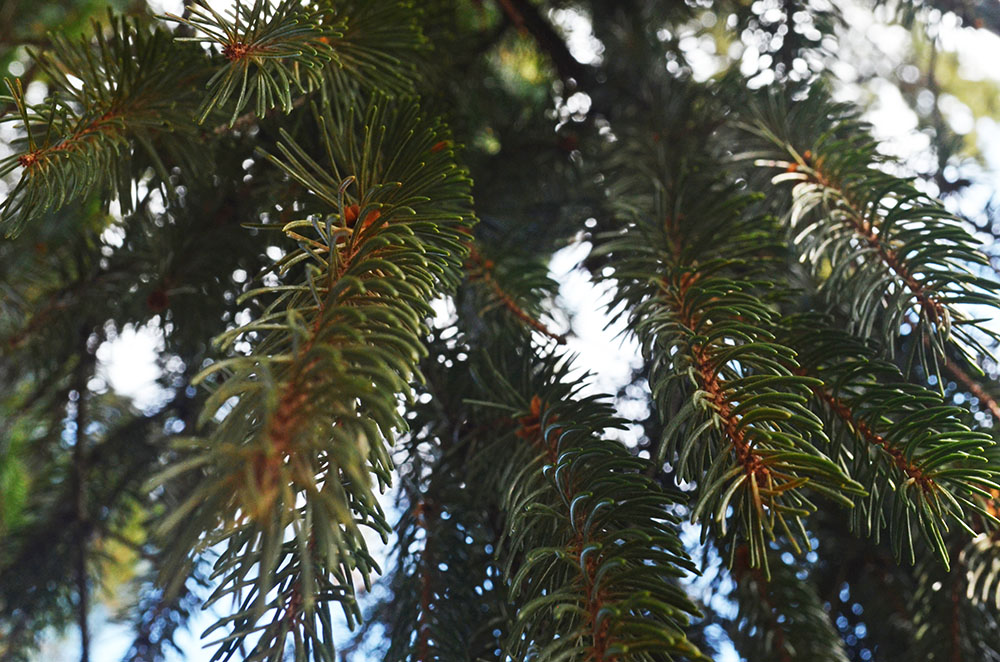 Any part of the branch can be used but tips pack the most punch
A tremendous source of vitamin C, spruce had long been used to ward off scurvy in our pirate and non-pirate forefathers. And, as with most things, the inventive ones found ways to make beer with it. The molasses based spruce beer recipes of Benjamin Franklin and Captain Cook have been recreated by several commercial breweries and home brewers alike. It can be found with a quick internet search. For those looking for an extreme, or at least different brew day, this is a good place to start.
If scurvy still scares you, then sell your home brew equipment and invest in oranges and lemons (as they are still better providers of Vitamin C). Luckily, most of us can simply focus on using spruce to flavor our beer, and decorate for Christmas. Just like hops, spruce can bring citrus, floral, and of course, pine flavors to your brew. Others have noted cola-like flavors. It also has bittering capabilities, but fresh spruce adds lots of astringency when boiled for long periods of time, so it is best used toward the end of the boil for flavoring and aroma.


How to Use Spruce in Your Beer

Since spruce flavors mirror that of hops, it can be used alongside or as a substitute for them in your recipe. Cascade and Centennial are popular choices in spruce beer recipes. 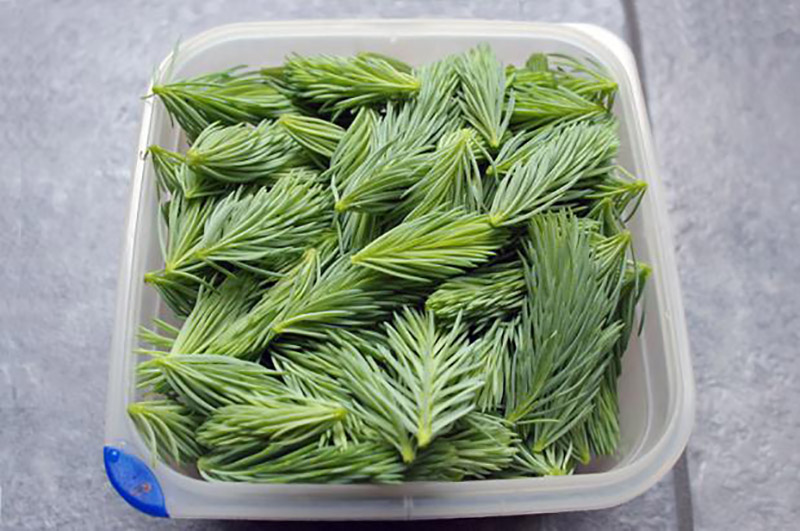 Tips are easier to spot by their softer feel and brighter color.
When foraging for spruce tips, the first thing you need to do is drink a beer. Then you need to find a spruce tree. Spruce is an evergreen conifer that grows in colder climates and is abundant in the northern U.S. and Canada, but can found further south in the central U.S. especially at higher elevations. Spruce needles grow directly and individually from the branch, unlike many pine trees which grow in clusters. Remove the needles and feel the branch. Spruce branches are rough whereas firs are smoother.
Any part of the tree can be used for brewing, but the tips offer the freshest flavors and are easiest to use. The new growth is abundant in the spring, so be on the lookout in the coming weeks. The new growth that comes out is easy to identify, as it is brighter and softer than the rest of the tree. Be respectful of the tree and don’t over pick any one branch. Two to eight ounces of tips are often used in a five gallon batch. Keep in mind that the smaller tips have a milder flavor. They can be stored in the freezer, but fresh is best.
Spruce can be successfully merged with styles ranging from pilsners to imperial stouts, and can either compliment the flavor, or dominate the beer. Typically, the higher your OG, the more spruce you should use to poke through the other flavors. Most recipes call for a 15-minute boil when using tips. 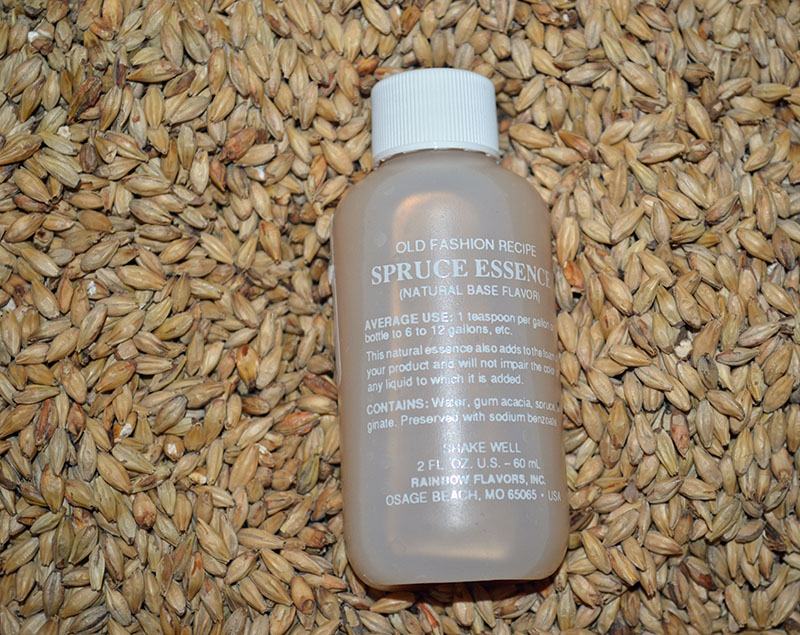 If worst comes to worst, you can always find some high quality spruce essence to use.
If you don’t have a beard, or fresh tips are out of season, then spruce essence is a fantastic option. Good essence will be made from real spruce and other resin products. Like most flavorings, it can incrementally be added at bottling or kegging to your taste. Be careful though, because this stuff is strong. Try adding ½ a teaspoon at a time until you find the flavor you’re looking for.
So if you’re trying to find some zing for that spring recipe that’s been on your brain these last few winter months, or want to add that extra Christmas punch to your winter beer, then the power of spruce may just be the source for your next brew inspiration.

Love the humor.... "If you don’t have a beard, or fresh tips are out of season"
Well done!
Spruce tips are just now blooming in Alaska! Time to start thinking about that next summer IPA.
Had a spruce tip beer in Alaska, was pretty good!
The reason I've always hesitated on using fresh spruce is recognizing the tree. What's the possible toxicity for accidentally using fir or other evergreen tree?
Nicely done!
Just make sure you get spruce instead of taxus/yew like this guy did:
https://www.reddit.com/r/tifu/comments/2or11t/tifu_by_homebrewing_a_poisonous_beer_and_having_a/
I brewed a spruce beer last spring and one thing I'd add to this is be careful with dryhopping with the tips. I found it gave a pretty vegatal flavor.
I'd recommend you try a spruce beer before you brew one. It's kind of an acquired taste.
Acquired taste? As in, "I'd like to acquire some Spruce Beer so I can taste it!"
Yes.
Not all spruce tips give off a good flavor. Try making a tea with fresh, rubbery buds to see what flavors are given off when they are heated. I use uniquely Sitka spruce which is found along the northwest coast of the continent, it is the same spruce used by Alaskan and Baranof Brewing in their spruce tip beers. Sitka spruce has a mild, sweet and slightly floral aroma with very little bitterness. I add spruce tips (1 lb per 5 gal) at 10 and 5 minutes from the end of the boil. No need to boil them for 60 minutes as that may extract vegetal flavors.
Fir trees are legit also. Aside from the identification method cited here, you can also pluck a needle if it is boxy or triangular it is spruce. The needles should be able to be rolled in between your fingers. Cypress, I believe, is similar to spruce in that it doesn't grow in clusters. But the needles are flatter and don't roll. Do a quick google search of tee identification methods. Spruce are very easy to identify.
You must log in or register to reply here.
Share:
Facebook Twitter Reddit Pinterest Tumblr WhatsApp Email Link