small white spots on top of beer in secondary

Hello, I am brewing a Australian summer ale. Was in primary to 7 days. Has been in secondary for 12 days now. There has been hundreds of very small white spots floating atop. What are they, should I be worried? Any help appreciated thanks. 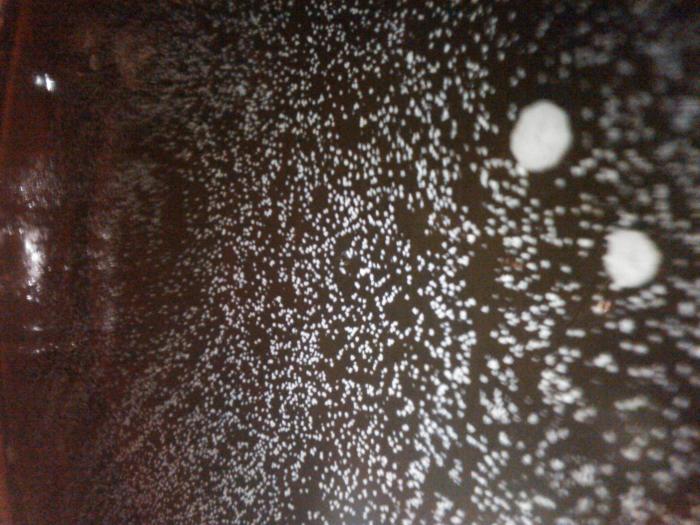 Maybe how does it smell and taste? It might smell kind of gross but if it taste like dead rhino rectum it is infected.
If it is infected you could always leave it in the secondary for an extended amount of time a year or so it could turn into something drinkable one day.
P

I have had CO2 come out of solution that worried me before that it was early stage of an infection, but it was way less than what is shown in your picture. i think there is a good chance you have a wild bug growing in there....that is just too much white stuff for a beer nearly 20 days in. an ale yeast should be all wrapped up by then as a general rule. how was your cleaning and sanitation before primary and probably more important when transferring to secondary? for a simple beer like a summer ale, i would strongly suggest not transferring to a secondary, just give it 2 weeks or so in primary and once fermentation is complete and hydrometer reading steady, go ahead an package. one less opportunity to pick up something in your beer.
OP
A

Thank you very much, a really appreciate your response. This was the first time ive used a secondary. I used cleaner and sanitizer on both primary and secondary, but did not scrub vigorously.
You must log in or register to reply here.
Share:
Facebook Twitter Reddit Pinterest Tumblr WhatsApp Email Link

B
White spots on top of beer in secondary