So I've been wanting to do some small batches for experimentation, and it'll allow me to make lagers using a small dorm fridge (no fridge space for a 6.5 gallon fermenter). Plus this way I can make 6-pack gifts for friends that like beer styles that I don't particularly care for (bocks, sours etc). So my questions...

1. If I get a 1-gallon bucket (again, fitting in a dorm fridge is important), I can expect a .75ish gallon batch, making 6 or 8 bottles, right?
2. I would obviously use less than a whole packet/vial of yeast, but how much less, and how do I properly store the extra?

Thank you! P.S. I tried a search, and not much came up.

A Mr. Beer fermenter fits in a mini-fridge. I've done it.

Anything less than 2 1/2 gallons isn't worth doing IMO.

Small batches are fun to test a style you don't feel like making 5 gallons of. I use a 1 gallon wine jug . You get about 3 liters when its all done. Enough to fill a 6 or 7. Its really cheap ..

but here's the thing ...3 liters takes just as long to make as 5 gallons. so alot of folks will say whats the point.

Bigpete9000 said:
here's the thing ...3 liters takes just as long to make as 5 gallons. so alot of folks will say whats the point.
Click to expand...

I'll tell you the point!
Small Batches SUCK! Not only do they take just as long, they take just as much effort! and Just as much yeast. (Don't try and use a partial....pitch the whole thing.) And when you're done...you've got 7 bottles of the best effen beer you'll ever make.....and unless you're like...>Ed Freeeken wort or OlllllO or somebody, you're not going to be able to repeat it. Kahuna actually means teacher....so you can trust me when I give advice.
Here are the 5 Kahuna Rules To Beginning Brew Experimentation.
1. Go to LHBS with WAY less than1 nights drinking funds....get a 3 gallon carboy
2. make at least 3 gallons at a time. Make Ale. It doesn't require the fridge.
3. Make a 3 gallon batch of Apfelwein.
4. Make time to post at HBT at least 2 or 2 times (Not POSTS) per day.
5. Make sure your mom doesn't smell your fermentors.
OP
S

Thanks for the responses. I'm thinking I'll maybe get at least a 2 gallon bucket/carboy.

check out this Basic Brewing Video episode for an idea of how much work a 1 gallon batch is.

check out this Basic Brewing Video episode for an idea of how much work a 1 gallon batch is.
Click to expand...

I've been doing a bunch of 2.5 gallon batches for an article I'm putting together on AG brewing in a Mr Beer fermenter...Besides blowing the dust off the Mr Beer keg I've been using a couple of 3 gallon water bottles as well...

I cold crashed a batch in the mr beer in my fridge Sunday, it fit fine. I haven't tried with the water jugs, one is really squat so it might fit....So you could lager easily with one.

And I'm not sure of the dimensions, but the 3 gallon better bottles, if you can find them, might fit in a frige as well, they're square sided, so 2 might even fit.

2.5 gallons are great, I can do AG full volume boils right on my stovetop, the average cost of an AG mini batch has been $15.00 and you end up with a case of beer...I did three last week, played around with a style I really didn't want a ton of beer of (Blonde/Cream Ales) and will end up with 3 different case of beer....

And if you haven't gotten AG yet, you can do it with a 2-3 gallon cooler, a folding steamer and a grain bag, you don't have to rig up a ball valve/ss braid (though it does make it easier.) A 2 gallon cooler can fit 4 pounds of grain, and a 3 gallon can fit 6 pounds...Like hops, that might not seem like a lot when you are doing a 5 gallon batch, but that's a pretty good sized beer for a 2.5 gallon batch.

Not a bad deal, imho.

If you wanted to do the mr beer keg route rather than a water bottle/better bottle, I bet you could get a couple cheap/free from other home brewers...I almost gave mine away to a buddy who likes the mr beer...Then I decided to keep it around to experiment, and now I find myself really getting into the whole small batch thing...I'm going to experiment with a couple more beer styles in a small batch format.

One hint, get a digital scale that measures in grams as well as ounces...some of the hops amounts are kinda difficult to measure unless you convert them to grams... One of the recipes called for 1/16th of an ounce....
S

I have been researching small batch brewing and found this thread which gives me most of the info I needed. A couple of questions:

1) Can you use a standard 5-6 gallon fermentation bucket or carboy on a small batch (2.5 gals)? Are there problems with the air space in them?
2) Do you just halve the recipes or are there other considerations? It sounds like I can use a full pack of yeast?

secinarot said:
I have been researching small batch brewing and found this thread which gives me most of the info I needed. A couple of questions:

1) Can you use a standard 5-6 gallon fermentation bucket or carboy on a small batch (2.5 gals)? Are there problems with the air space in them?
2) Do you just halve the recipes or are there other considerations? It sounds like I can use a full pack of yeast?
Click to expand...

1) Sure can. It works well for primary as the vigorous fermentation fills up the extra air space with co2. Not so good for secondary though because the air contact with the extra space after transfer might cause oxidation. (I say might. I've never detected oxidation using 5 G carboy for secondary with 3 G batches.).

2) Get promash, beersmith or some other software and adjust other recipes. The recipe calculations get skewed as you boil different volumes. I still use a full pack of yeast. You won't over pitch and you won't under pitch unless you are working with a barley wine or some other horrific OG.

secinarot said:
I have been researching small batch brewing and found this thread which gives me most of the info I needed. A couple of questions:

1) Can you use a standard 5-6 gallon fermentation bucket or carboy on a small batch (2.5 gals)? Are there problems with the air space in them?
2) Do you just halve the recipes or are there other considerations? It sounds like I can use a full pack of yeast?
Click to expand...

1) Although some might disagree, personally I use a three gallon fermenter for my small batches. I'd rather just have a normal amount of headspace, in terms of beer/fermenter volume.

I just picked up a 3 gallon better bottle for 15.00 (At some point I may dump the water bottles and get a few more of these, I can cram a lot of them into my swamp cooler, methinks if I were inclined 10 would fit in there. As it is it looks like I could get at least four in alongside a 5 gallon bucket.) 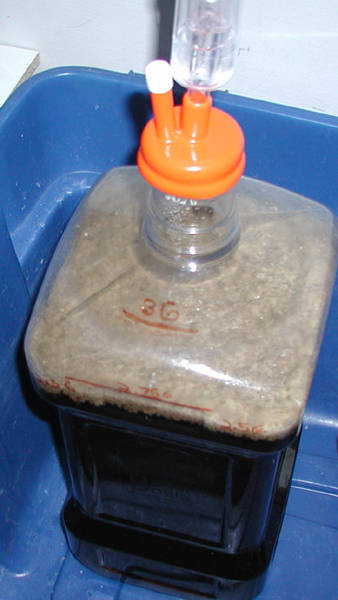 I have also used the much maligned Mr Beer fermenter (in fact I posted a bunch of my stove top all grain recipes in the mr beer thread.) The brown jug is great, because you can crash cool, or even lager in any standard sized fridge. 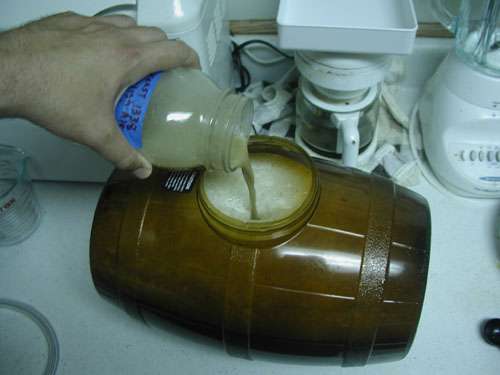 I also have 3 standard 3 gallon water bottles. The trouble honestly with these are all the ridges and gap for the handles, they are hard to clean even with a jet bottle/carboy rinser. You almost have to use a couple soaks in oxyclean to loosem all the krausen from all the crevices. AND you have make sure you thoroughly sanitize it.

2) Just halve the 5 gallon recipes. Beersmith is good for doing it quickly. And yes you use a whole pack of yeast, or a normal size starter. And usually the brew really takes off, becasue of the healthy amount of yeast cells.

Would you get blow-off during primary with the 3 gallon BB?

rasherb said:
Would you get blow-off during primary with the 3 gallon BB?
Click to expand...

There's no more or no less a risk as with a 5 gallon batch of beer in a normal sized fermenter...I haven't needed one yet for any of my small batches, but, like I do for all sizes, I have my handy dandy airlock blowoff tube nearby just in case.
S

Thanks for the replies. It sounds like I'd be fine with my standard primary but should invest in a 3 gal carboy/bottle if I want to do secondary.