Homebrewing is a hobby that can be as complicated or as simple as you want it. And homebrewers are likewise varied in what aspects they enjoy most. There are those that are just out to do something different than the norm, those that love to build and create sophisticated custom brewing systems, and those that have a passion for trying to create a beer they’ve imagined in their heads.
All-in-one all-grain brewing systems are starting to pop up everywhere. People have varied reactions to them based on the type of homebrewer they are, and what aspect of the hobby excites them most. For the extract brewers, the draw is obvious, as the marketing promotes them to be as easy and quick as extract brewing, but with the full creative control that comes from using malt grains rather than extract.
For those that have already made the transition to all-grain, the appeal is not as obvious. While all-grain brewers already appreciate the full creative control of mashing their own grains, the all-in-one systems still have two key appealing aspects. First is time. Although full creative control sounds exciting when you’re describing it to your friends, a day still only has 24 hours whether you’re an extract brewer or all-grain brewer. So the extra time spent mashing/sparging grains means less time for something else. While most all-grain brewers would never transition back to extract brewing because of creative control or taste, no one would turn down a gift of free time to do… whatever they want!
The second appealing aspect for those already doing all-grain is consistency/repeat-ability. The majority of the all-in-one systems on the market utilize electric heating elements and electronic controllers. This provides a level of control where you hit the ‘precise’ mash step temperature. This means if you got it right and the 148F mash temperature works great in your final beer, you can do the exact same thing again next time. Or if you want more body and you want to see what 152F does, you can try that next time, instead. 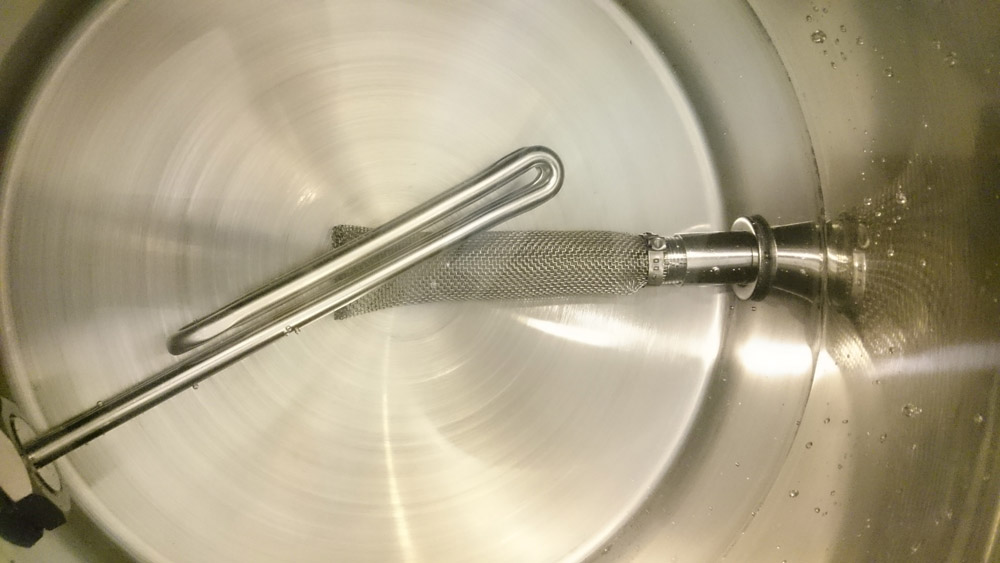 Electric brewing uses heating elements to boil wort and heat strike water.
Going electric brings with it another aspect of freedom and restriction. The major thing it brings is the ability to brew indoors without worrying about open flames and carbon monoxide. This opens up more flexibility on brew day, because it means the sun going down doesn’t mean you now have an added level of difficulty by brewing in the dark. It also means that, as a parent, it’s easier to juggle parenting duties while brewing if you’re in the basement/kitchen than if you were out in the garage or on the back deck. But as a lot of these systems run on 240V, it can bring a restriction of where you can brew based on existing electric dryer/stove plugs, or paying for a dedicated 240V brewing outlet being installed.
An important part of the all-in-one systems that can’t be overlooked is cost. With extract brewing you can get away with bare bones for equipment. Stepping up to all-grain brewing brings on the need for extra equipment whether you’re doing BIAB or 3-vessel brewing. If your 3-vessel system consists of several keggles on a custom-welded stand tied together by multiple electric pumps and controllers, then these all-in-one systems probably won’t give you sticker shock. But they do represent a price step above what’s required if you’re simply looking to step up from extract brewing to all-grain in itself.
I was personally curious about these systems. I did extract brewing for a few years but got disillusioned because the end product didn’t match the taste I was pursuing. Going to all-grain was the answer for turning out beers I actually enjoyed drinking, but the time commitment means I can’t brew as frequently as I want. So I was curious if these systems could still maintain the quality and creative control of all-grain brewing, but allow brewing to be much more flexible in my personal schedule such that I could brew more often to hone in a recipe without being an irresponsible parent. So I reached out to a number of vendors of these systems, who were gracious enough to let me take their systems for a test drive to get a hands-on comparison across multiple systems to better understand what electric all-in-one all-grain brewing was about. The equipment overviews are presented in the order that I evaluated them. 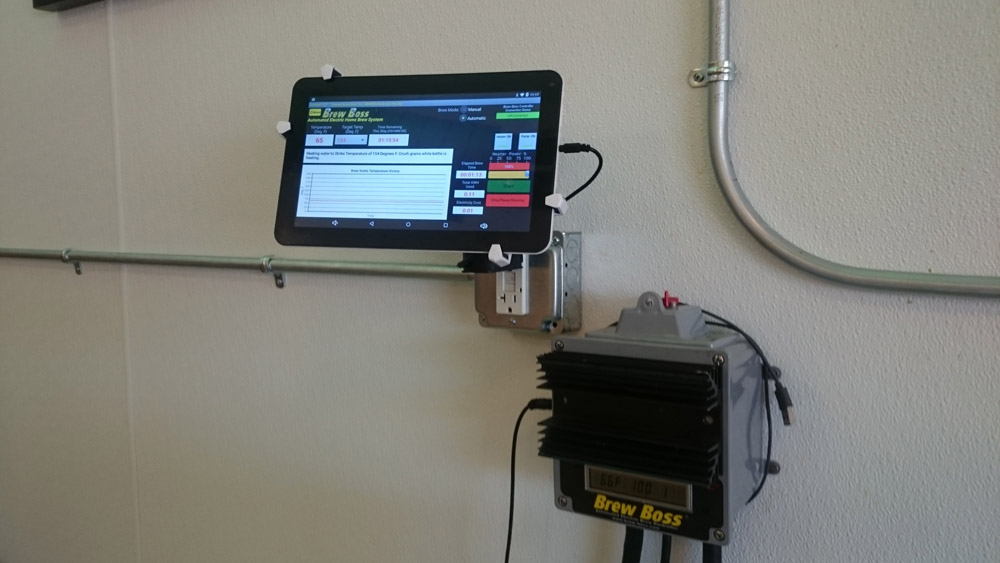 Digital control panel for the Brew-Boss
Electric brewing systems come in a 120V variety (plug in any socket in your house) and 240V (special plug like what’s used for an electric dryer or electric oven). A 240V electric requirement adds a certain limitation (or additional cost if you get one installed somewhere convenient), but the power capability of the heating element is huge. There’s some basic physics that are key to understanding this. Power ratings of electric heating elements tell you how much heat you can put into your wort to heat it up to a target mash temp, boil it, etc. The higher the rating, the faster it will be able to increase temperature, or be able to get you a good boil on a large volume of wort. Power is equal to the voltage you put across your heating element times the current you have flowing through it (P = I x V). And your home outlets are only able to pass a certain amount of current before they trip the breaker (to keep you from melting wires in your house). So 120V systems are limited in the power they can put into heating your wort because you can’t heat anything if you keep tripping your breaker in your house, and therefore they stay below a reasonable level. 240V Systems are automatically benefitted by having twice the voltage, but 240V breakers are also typically rated for a higher current before they trip. So this really opens you up to much faster brew days and the ability to get a raucous boil. But to truly compare, you have to look at the power rating of their heating element, not just the voltage.
That frothy boil brings up another consideration for electric brewing. It is great to have the option of brewing inside since you’re not cooking with propane, but you have to think about where that boiled off wort/water is going. If you’re boiling off 1 – 1.25 gallons of water an hour and you’ve got a 60 minute boil, you’ve got a gallon of water floating around in the air that has to go somewhere. Brewing outside you typically forget about that since it just gets absorbed into the massive open-air surroundings. But you’ll find inside that anything cool near your brew area gets covered with condensation fairly quickly.
You have to be particularly careful that you don’t end up washing your ceiling and dumping all of that back in your kettle (steam going up, condensing on pipes/ceiling/microwave oven, cools, then running down and dripping into your kettle sitting below). Similar to managing the steam coming off your wort, you also need to manage the aromas. If you don’t live alone, the rest of your family may not dig the house smelling like a brewery. Sure it starts out nice with mashing grains smelling like fresh baking bread, but boiling wort is different. And the love of hops is not universal (I know, I don’t understand that either). So when brewing inside you need to have a good air circulation plan to manage the steam/condensation and find a way to get the smells out of the house. 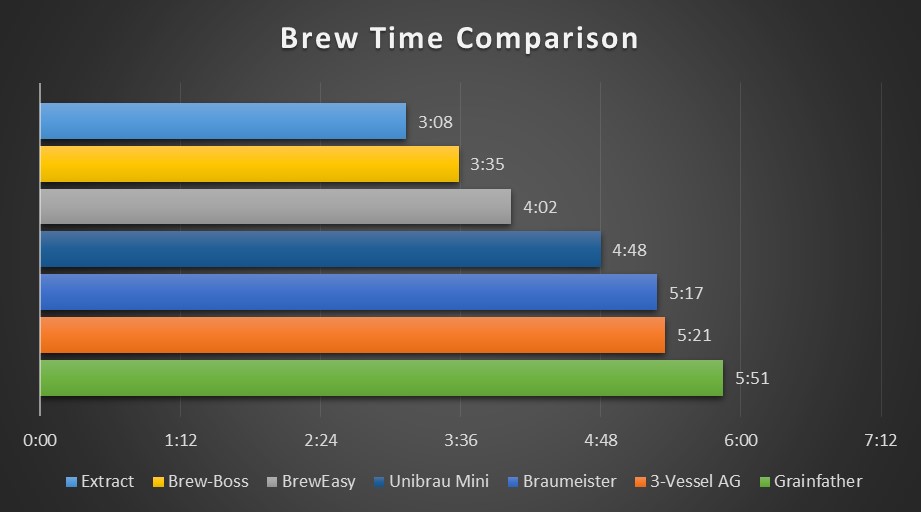 It’s difficult to have a pure comparison in brewing time, as every brew day brings its own surprise challenges you get an opportunity to learn from, batch sizes can be different, grain bills lighter or heavier, etc. With the evaluations here, I brewed different beer styles in order to exercise the equipment through a variety of beer styles. There is also a learning curve on the systems where you figure out little efficiencies to speed up the process. Almost all of these systems have advertised brew times that are notably faster than what I’ve achieved. Those advertised numbers are all probably real, but they should be considered the best you’d ever be able to achieve once you’ve mastered the system and are brewing a simple recipe, not your “average brew day”. That all being said, one of the key aspects I set out to judge across these systems was if they really could shorten the brew day. So here’s an analysis of my numbers (displayed in Hours:Minutes format), and compared to my personal historical times from my start with extract brewing and my more recent all-grain 3-vessel brewing:

All of these systems worked well and were made with good quality parts. Generally the trend followed that the higher price tag systems came with higher quality equipment. However, that didn’t necessarily translate into a better control of the brewing process, as all of these systems worked pretty well in that regard. Depending on what aspect is important to you, it might steer you toward one system more than another. Below are my high level summary statements of each system, as well as a table with some notable data to compare across the systems. Following that I have a bit more detail on each system. 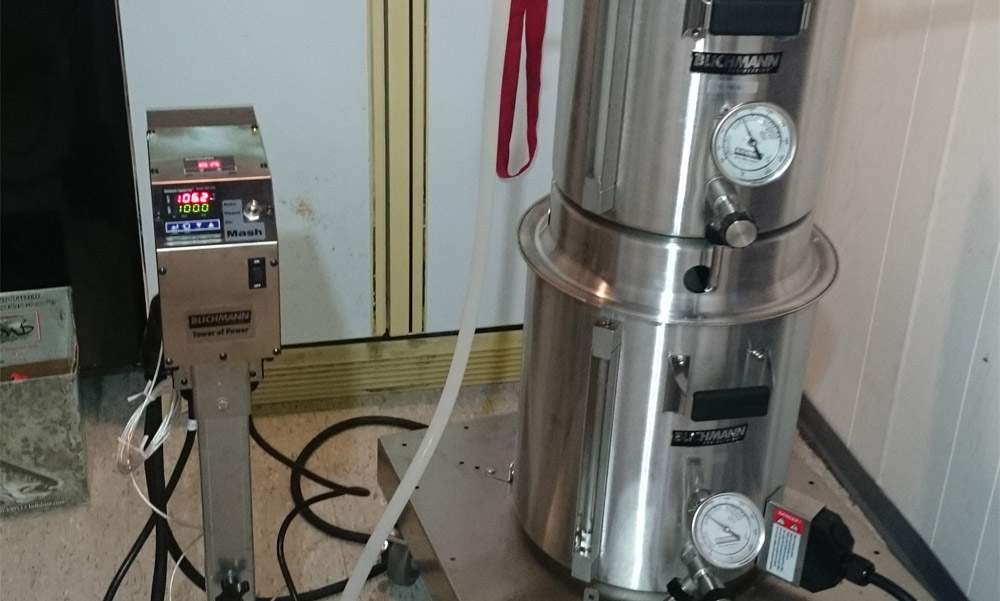 Blichmann BrewEasy
Blichmann BrewEasy 5-Gallon 240V has impressive equipment quality, and I really like the convenient set-up on the kettle kart. Once the equipment is washed, it naturally stacks up and is ready to go for the next brew session. The 240V heater power worked really well, but I really wished the controller had more features or a better programming software. 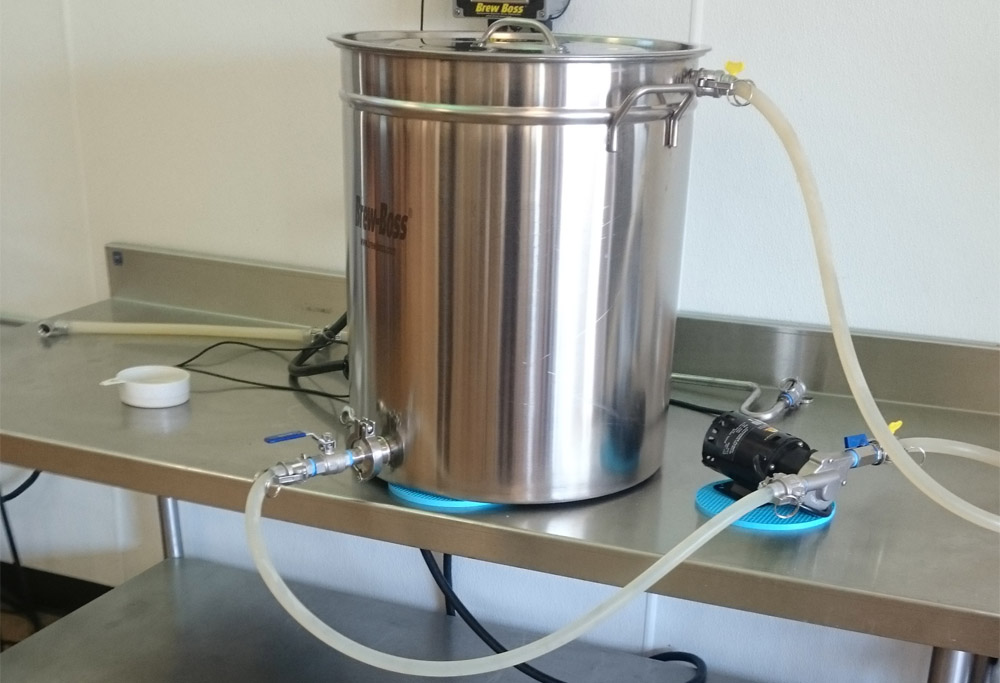 Brew Boss
Brew-Boss 20-gallon COFI 240V has nice equipment features with good quality, and is easy to clean. None of the other systems come even close to the amount of control and features of its Brew-Boss software/controller and the integration with BeerSmith is a huge plus. The 240V electric power again shows its prowess in time to heat the mash and ability to moderate the boil intensity. (The time in my summary table is for a 13-gallon batch.) 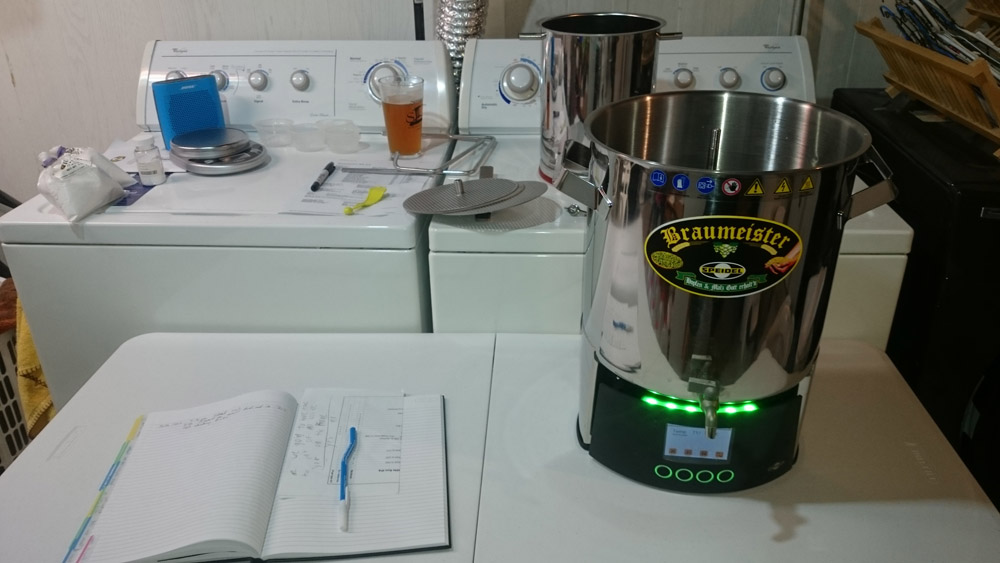 Braumeister
Braumeister 10L 240V is very well made and feels precision manufactured and well-engineered. The programming interface and LED control panel to automate/prompt you on your brew session is really nice. The electrical cord with a German plug is an annoyance to have to modify, but once you do it, that’s behind you. I wish the heater had more power since it’s got the ability with the 240V to do a lot more.

Grainfather
Grainfather 120V is a well thought-out system, and it’s easy to see why it has a good following. The 120V is a blessing and a curse where it’s nice to have the freedom to brew wherever, but frustratingly slow to heat to a boil. With a few add-ons like an insulating jacket to help heating time, and hop spider to allow better use of the counterflow chiller it probably would be super nice. The inability to hold mash temperature was disappointing, but again with an insulating jacket that would probably help as well. 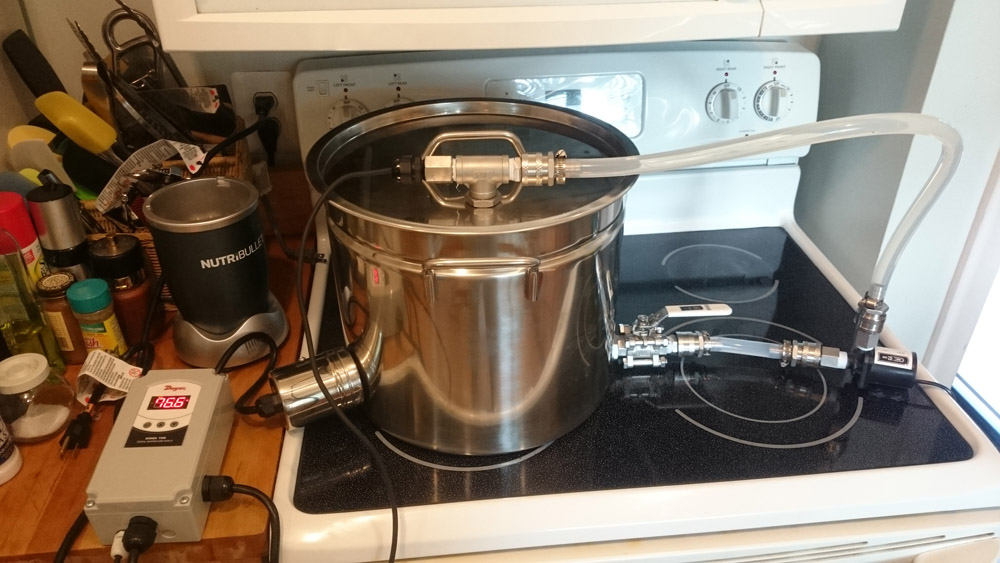 Brau-Supply Unibrau
Brau Supply Unibrau Mini 120V is nice for its very compact size and having the most accessible price point. But even though it’s the most affordable of the systems I tried, it still is a great product and not to be dismissed simply because of the price. It has good temperature control and makes for a very easy brew day. It has the 120V portability benefit, but probably also needs some insulation to help overcome its limited boil capability.
Part two contains reviews of all the above systems.
Brad is a full-on craft beer geek, talking about craft beer and homebrewing to any and all that will listen. He has a small website, where he has craft beer travel stories, homebrewing, and beer reviews, from a Michigan home base (www.beersnobby.com).