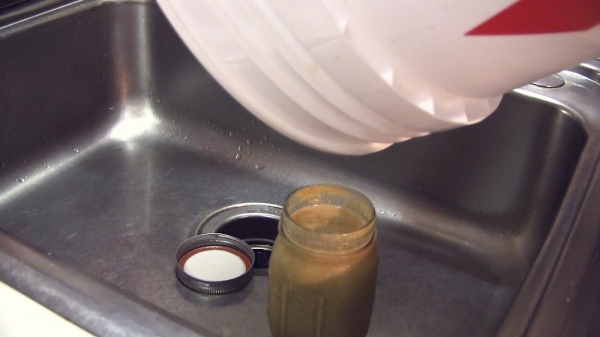 Simple Yeast Storage Procedure
Advantages of Simple Storage
Advantages of Yeast "Washing" or Rinsing
Doesn't yeast washing separate the good yeast from the bad?
Unfortunately it does not. Water washing yeast is a common laboratory procedure for separating the dissolved compounds from the suspended material. It does not effectively separate out the suspended material. There will be some stratification, forming layers of partials that sink at different rates. Yeast that has formed flocks will sink slower than single cells. This, however, is independent of viability[2] [3]. In the end, separating yeast using water washing may result in a small amount of yeast that appears beautifully creamy , but the viability is the same as the large amount of yeast that was discarded. Another problem that is introduced with yeast rinsing is that the selected yeast are the slow flocculators. When this yeast is used it could result in cloudy, or slow to clear beer.

Do I need a starter?
In a blind taste test it has been shown that there is very little perceived difference in beer quality whether using a starter or pitching directly from refrigerated slurry.[5] In addition to increasing the biomass a starter will also activate the metabolism of the yeast. If the yeast has been in storage for more than a few days there will be a lag time while the yeast acclimates to fermentation. This typically takes less than a day. [4][9][10] There seems to be mostly anecdotal evidence indicating that off flavors are produced during this lag phase. [citation needed] To avoid this, a starter could be made from the stored slurry.

How much yeast is in these jars?
A safe estimate is normally 1.5 billion cells per ml of thick settled slurry. In the hundreds of cell counts I have done I have seen this range from 0.5 billion per ml up to 4 billion per ml.[6] It depends mostly on how the wort is prepared, but is also affected by the yeast strain.[7]

What is the viability?
Viability will depend mostly on storage temperature and storage time. The half life of refrigerated yeast is approximately 3 months. Frozen yeast will lose approximately 50% of the viability from the freeze,[8] but will drop very little in viability over time.[9] We can conclude from this that if the yeast is to be used within a few of months, it is best to store it in the refrigerator, and for longer storage freezing may be more appropriate.

When I save yeast at all, I do the simple storage. US05, WLP051 and WLP001 usually. Those are the ones I use most often. For me, there's not much point in storing anything else as I won't use it again for many months.
Thanks for the info!

"Mason jars work nicely for this purpose. A quart size jar which will hold about 300 billion cells"
at 300 billion cells, for a normal gravity beer (say 1.050) wouldn't you end up over pitching if you create a starter? Or is the "over pitching" idea really not relevant on the home brew scale?
I am new to starters and yeast harvesting.
D

So your yeast that collects in the bottom of the fermenter can be reused? Is this practice used a lot?
Y

I mainly brew IPAs, so I have been reusing washed 1056 yeast for a few months now and while I see some lag in some batches, for the most part I am getting 80%+ attenuation in my beers. Other than saving money, I like the process of washing yeast, it is a fun part of the hobby.
D

@yukonhijack So what is "washing?" If I am going to use it for the same recipe of beer again cannot I simply pout and store??

@dokken5 That was the point. He is stating that you can just take the cake, suspend it by swirling, pot it, and then store it.
The point is to NOT "wash" the cake as you lose significant viable cells.

@yukonhijack He is stating that "washing" isn't needed. Just store the cake and reuse. Get more viable, active yeast.
D

So how much of that "cake" should be pitched into the next batch?

@dokken5 Depending on beer, you use a good estimate of 1.5 billion cells per ml of slurry.
So if you need 150 billion cells, use 100 ml of the slurry.

dokken5: The professional breweries don't buy new yeast for every batch either. Some breweries (with their own yeast lab) have been reusing the same yeast for 10 years.
If you want to pitch a precise amount, Mr Malty and BrewersFriend have a good calculators, although they give you vastly different advice. Or you can pitch a quart and call it good.
http://www.mrmalty.com/calc/calc.html
http://www.brewersfriend.com/yeast-pitch-rate-and-starter-calculator/
D

So for the average five gallon batch of Ale you need about 150 billion cells??
Thanks for the help guys. Up until now all I have done is dry pitch. Just starting to branch out a little.

So with the Mason jars, I read that the lid is not to be too tight. My question is, how tight is too tight? Aren't you worried about something getting in to contaminate? would a layer of plastic wrap under the lid be necessary?
T

Once the slurry has time to settle, it's going to separate out, isn't it? At that point, couldn't you just pour off the beer, replace it with water and recap? Or is that just unnecessary?

@The_Nid_Hog - The beer will help preserve the yeast until next use, as long as it's not a high gravity beer. The article estimates 8% before it's detrimental to do so. You're trying to keep as many viable cells as possible. I didn't wash until I was ready to build my starter, and even then I just gently swirled off the top layer of slow floccers, and dumped the rest of the slurry into my starter jar.

Another method to harvest yeast... do it from your starter.
http://brulosophy.com/methods/yeast-harvesting/
This is particularly helpful for high gravity beers as the article mentions that washing yeast from high ABV beers is preferred over "simple storage." If you harvest from the starter, you're doing this from a low OG starter wort.
Harvesting from the starter also results in yeast slurry that can be used across styles, as it's not affected by the presence of hops.
B

I use this same simple storage method. This year I have reused Wyeast 1028 at least 5 times now from beers with an OG of about 1050 - 1060.
Another great article.
Thanks!
TPH

Great article! I really enjoy reading your website. What a trove of useful information. Really appreciate the efforts you are making and sharing with the rest of us mortals. Stopped rinsing my yeast some time back after reading your blog. Thanks a mil.

Excellent article! Could this be a sticky in the Fermentation & Yeast forum?

Thanks for the article! I have been wanting to start yeast washing. However, this process seems more simple and effective. I will definitely give it a whirl on my next batch.

Thanks for the support everyone! Your feedback is highly valued.
Most of the questions that have come up in these comments seem to have been answered, which I appreciate. I'll try to answer the open questions, but if I missed yours, please feel free to ask again, or send me a PM.
@rhys333 Yooper actually asked me to write this article with the intent of making it a sticky in the Yeast forum.
@Singletrack Yeast from an all grain wort that is carefully transferred to minimize the amount of trub will be about 2 billion per ml.

Excellent article. I am (was) an long time yeast washer based on the original sticky. I've been following that thread and recently began using the method in this article. I brew weekly, and both methods have served me well. This is just easier.

4 quarts of slurry from a 5 gallon batch? I typically get a little over a pint.
G

Am I unable to reuse the slurry if I dry hopped since there will be hop sediment left?

Good article, so much easier than washing.
W

I've not yet reused yeast, but would like to harvest the yeast from my current batch. I'd have a few pint mason jars. From what I read (100 ml at 1.5 billion cells/ml) would get me enough to pitch for a 5 gal batch, correct? That comes out to a little less than 1/4 pint.
A

Great article. The viability formula, the variable t is in days and the results in percentage (if I do x 100)?
U

I wonder if the author made a mistake when he said quarts? 4 quarts of slurry is a gallon. In the photo it appears the mason jar in the sink is pint size, not quart size. It is difficult to tell for sure though.

if you transfer to a secondary you can harvest the yeast then dry hop. I like my beers to fall clean so I always transfer to a secondary. Right now I have about a quart of yeast from the local brewery my friend owns. He took it from the port at the bottom of his 50 BBL conical. First he let the trub run out a little and what I got was a mason jar of creamy yeasty goodness. It has been in my fridge for about a month. I made a little wort from DME on the stove and cooled it down. Then I poured off the old wort that separated and added new. Like this article recommends I will make a started from this for the next batch
M

Sorry to resurrect an old thread, hope somebody finds this query....
Great article, thanks for this, I am going to try and reuse the yeast from my current brew.
I have a question about repitching the stored yeast:
Do I swirl and remix the whole Mason jar and pitch the whole quart?
Or do I just pitch the beer layer?
Or do I chuck the beer layer and just pitch the trub layer?
Sorry for dumb question, I am new to yeast storage.

Magnis, in the few times I have used this method I just allowed it to warm up, swirled the whole jar and pitched it. It turned out good for me. You could also pour off some of the beer and pitch just the yeast. Hopefully there is not much trub in the mix.

Trying to create yeast washing and starter directions for myself