I was looking for an easy way to aerate my wort without splashing wort everywhere or buying expensive equipment. I put together a simple venturi system that involves a 1/4" ID barbed tee and a few feet of 3/8" ID hose. The barbed tee connects an air intake hose to a flow hose, as shown below.

This was an extract recipe with a 3-gallon boil; I emptied the boiled wort into my bottling bucket, topped it up with water to 5 gallons, and hooked the hose to the spigot. Then I opened the spigot and drained the wort into the brew pail. I'm fairly confident that this effectively added air because I could hear the air bubbling into the liquid (the sound stopped when I closed the end of the air intake with my thumb), and because the wort in the bottom bucket was significantly frothier than in the top bucket. Also, a close look at the detail photo below (sorry for the low image quality) shows that the wort flowing out of the tee is significantly lighter in color than that flowing in, because of the added bubbles.

Total cost was about $5 in parts. I got a check valve for the air hose just in case, but it's not necessary as long as the air intake is above the tee. I also got a micro filter for the air intake, but I decided that would be overkill, given that everything else is open to the air at this stage. I did sanitize the hose assembly before use by submerging it in sanitizing solution, making sure to evacuate the air from it as I did so.

One big advantage to this approach is that it would also work if you were going to ferment in a carboy. You probably don't need a bottling bucket with a spigot, since you could attach the barbed tee to a siphon instead, but you'd want enough of a height difference between the vessels to keep the liquid velocity fairly high. 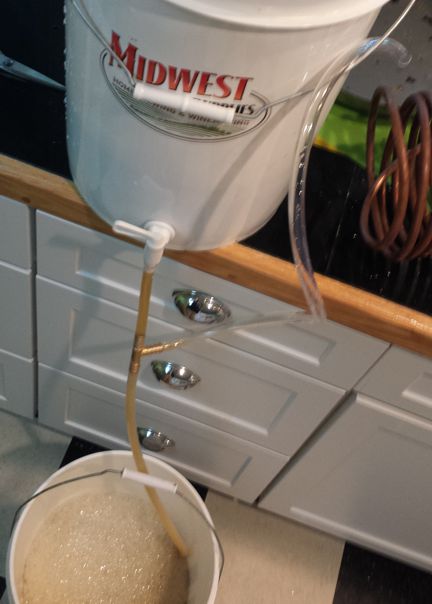 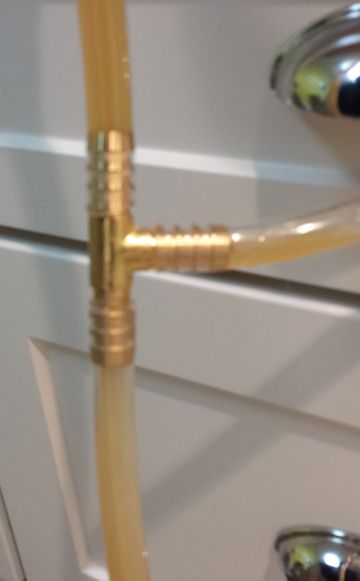 That's a pretty cool idea. I just use a degassing rod (http://www.finewinesofwindber.com/wp-content/uploads/2015/01/4669mixstir1.jpg) attached to a drill to aerate my wort.

It also has the added benefit of being able to thoroughly combine the yeast and wort after pitching.
W

I dig it. I'm going to use it on my next batch. Way better than my current method of holding the receiving carboy and shaking it around as it fills

This a pretty cool system. I typically pour (through my BK valve w/ a barb) from my BK to my primary bucket through a double mesh strainer. Its pretty fine so it catches a ton of trub/hop bits and aerates at the same time, and if i don't feel like i got enough I just sanitize a whisk and whip this living $#!t out of it for a few min. This looks like it might do a better job of getting more O2 into the wort but I think it would involve another step for me since I'd still have to strain/filter... Though I could hook this up to my BK bark and have the end of the outflow tub be through my strainer... Now you got me thinking...
W

I have the same rig only plastic, works great. I don't need that extra hose of the air intake and I place a cotton ball on top of it for a filter. Wish I had an O2 meter to do an actual measurement to see how good it actually works but I usually have foam coming out the top of my fermenter by the end of racking.

I used to do the same thing, except mine used worm clamps and a plastic tube between the two. Worked pretty well.
View attachment ImageUploadedByHome Brew1463611610.049546.jpg
F