I've heard stories of people making brewpots out of old pool filters and stuff. I would love to see peoples cool

The owner of a local homebrew show near me uses a 10 gallon dairy pail... I don't have a picture of that at the moment, but I'll snag one next time I'm down there. 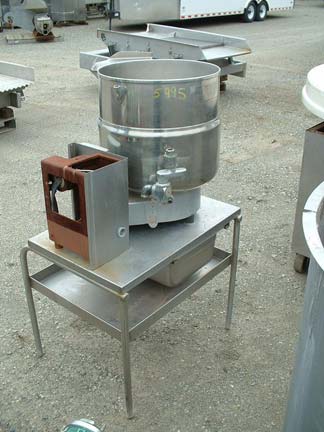 springer said:
I am picking one up like this one this weekend 5500w 220V electric kettle

What is it? How much did you pay? Where can I get one?

Its a Groen SS steam kettle that is used in many kitchens for soups and such. I bought it off Craigslist with several other items from a bankruptcy sale. Dairy farm used it to pasteurize goats milk. I paid around 100$ for it because I bought so much it made the lot price lower . I already sold it ,was not really what I wanted because it was only a 10 gallon pot. They go from $500-1000 used

I picked that up and a 6 ft commercial SS 3 hole sink, 2 commercial SS freezers These also went very fast I took them to NYC and sold them to a friend who owns a catering business.

All I wanted was the two 6 ft SS work stations in the lot . But I made some good coin off the others so the workstations were free + some cash in my pocket.
P

I'm looking at an alternative to the build your own brewpot on High Gravity. I'd like to go electric and have been looking at British sites where they buy cheap kettles and put the elements in a fermenter bucket. No one on this side of the Atlantic seems to be doing that, so I may be the first. Although I'd prefer not get blown up in the attempt. High Gravity may get my money after all.
You must log in or register to reply here.
Share:
Facebook Twitter Reddit Pinterest Tumblr WhatsApp Email Link

Show me your tubes.

P
Show us your keggle

Show off your mash tun
2