Hi! This is my first post but im gonna get straight to the point

Ok so im making a ginger bug and im having a repeating problem that keeps happening. This culture (which as all i think) is consisted of cane sugar, cut up ginger and very very nice water. But anyways this one cultured significantly faster than my previous ones (its been hot and humid so maybe thats why) so fast that the day after adding everything I started seeing bubbles at the top. I've been feeding it a tablespoon of ginger and sugar everyday and stirring it almost every time I look at it. But this white stuff (almost looks like flakes) is on top of the bug and its also inside on the bottom of the jar around where there is sunken ginger. I believe that this is mold if I'm correct and if so I read to dump it and start over.... Again. Any ideas how to prevent this?? 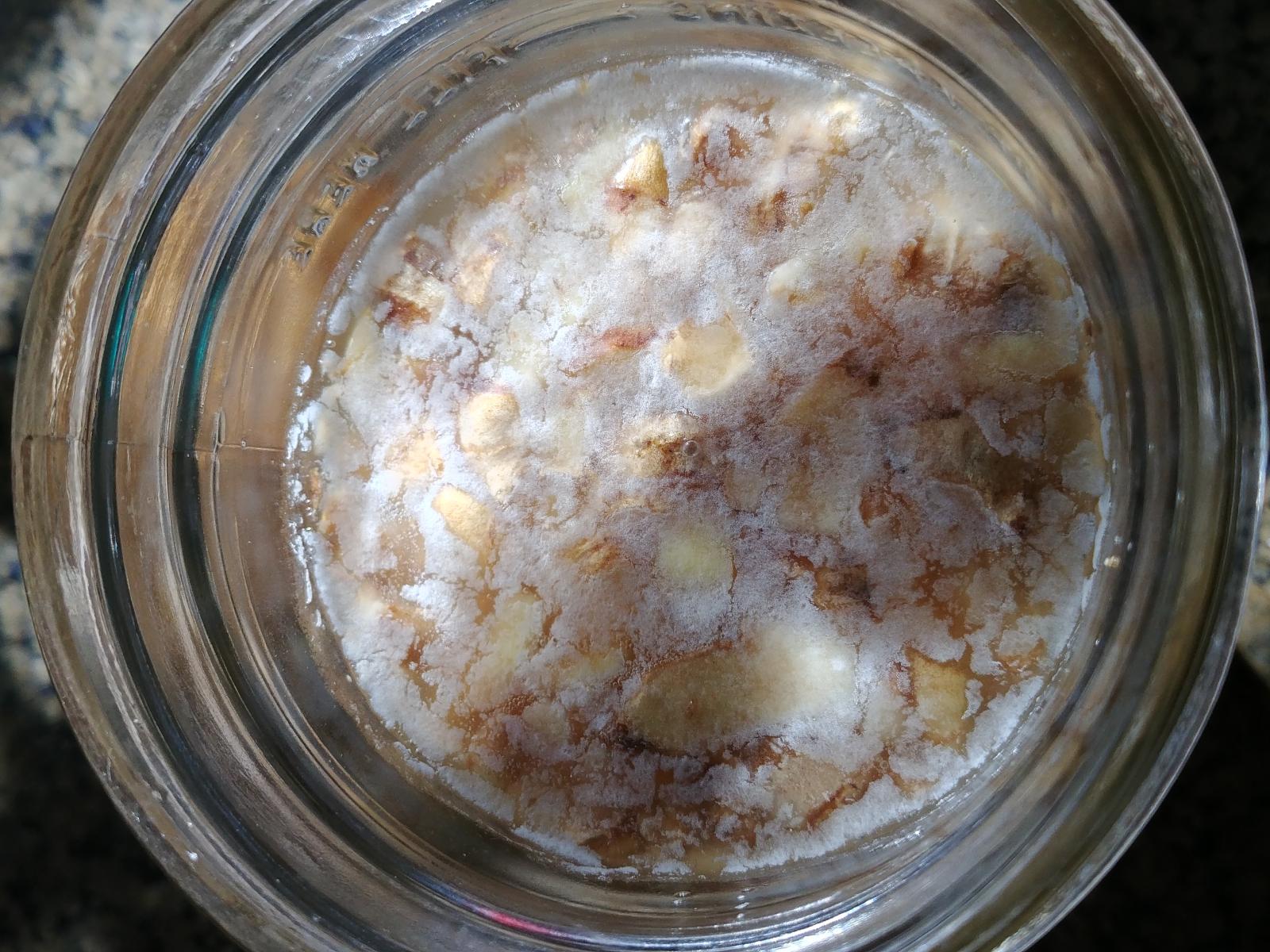 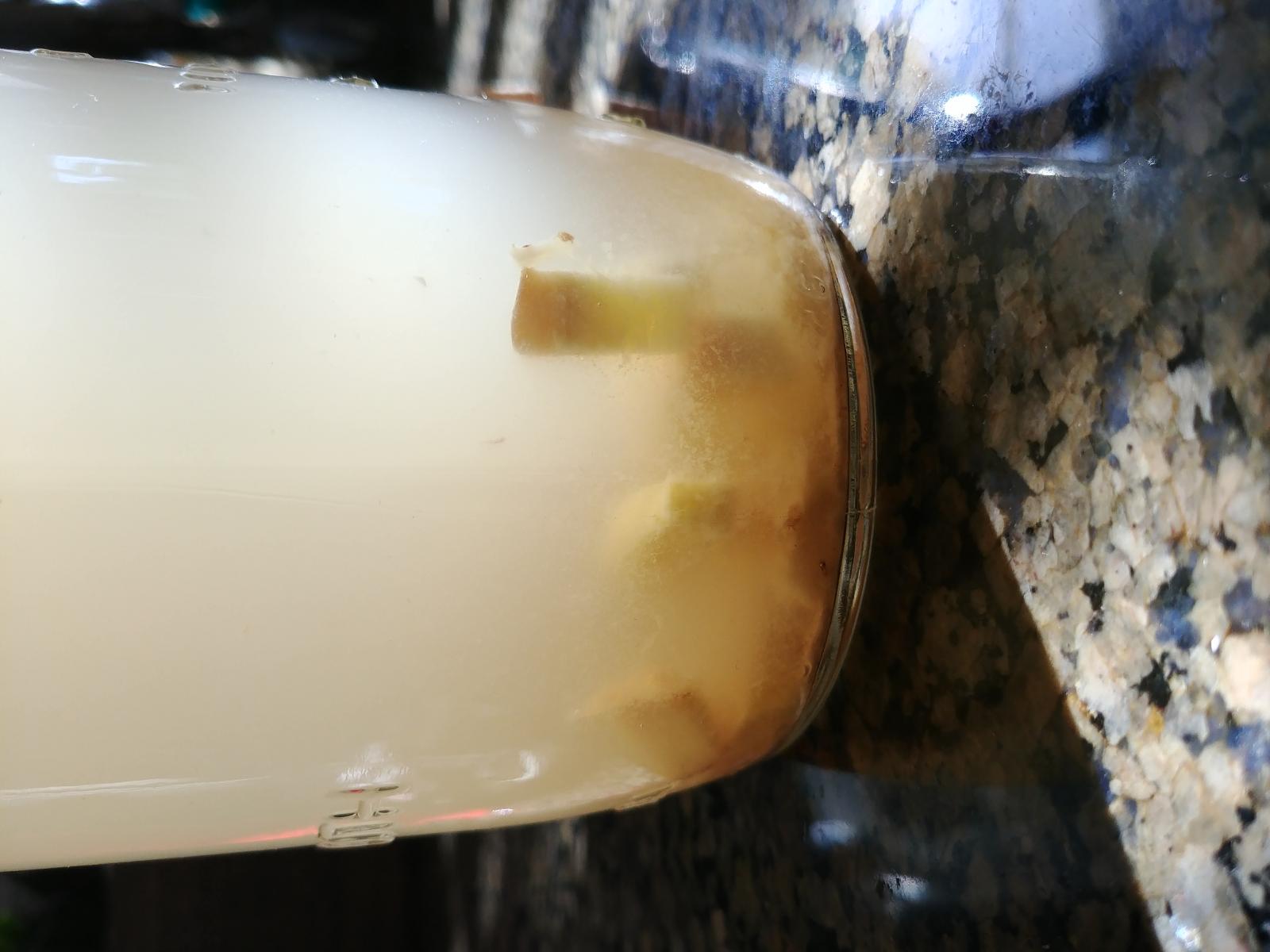 That looks like mold, on the top at least.

How are you starting the entire thing? Just adding ginger and sugar and using water? Sanitize better? What does it smell like?

I found that so long as it doesn't smell like vomit or rancid, it's good about 90% of the time.

I've been experimenting with different way to do a starter, I found that Ginger doesn't have enough of a yeast culture to get going by itself. I live in central Texas so humidity and temp varies.

After about four (at least) batches of kimchi, three loaves of sourdough, I'm just now starting my own hard (hopefully) ginger beer. The bug I started with was heavy on the ginger, a packet of bakers yeast, table sugar, and jalapeno (I like a bit of kick and heat). I found that without a "bumper" crop of yeast, my starters would always turn for the worse, getting moldy at the least, smelling like vomit at worse. Any vomit smell, I throw out.

Edit: Grate the ginger more. Get one of those box cheese graters and use the smallest grater size on the box.
Last edited: Jun 21, 2017
E

Most of the ginger beers that I have made have been done with Red Star Pasture "champagne" yeast. A couple weeks ago I started a "bug" with only ginger, sugar and water. In the first couple days a big green blob of mold started to grow. I though, aw shucks it's ruined, I scooped out the green snot and I let it ride. I just looked at it about 1 week later and found that it was bubbly and happy, smelled a little like dirt, but not in a bad way. I added more sugar and more ginger, and had a little taste. It was great! I think I will start a batch this weekend (I have a batch of ginger beer made with pasture yeast finishing primary) with this culture as the starter and see what we get. I am pleasantly surprised, we'll see......


oh, by the way... when the mold was on top, the ginger all sat on the bottom. Once I removed it and it started to bubble, all the ginger floated.

oh, and another thing... I didn't leave it open to the air. I had the jar that the starter in sealed with an air lock.
OP

Thanks for the responses! I ended up dumping it because i wasnt sure what the stuff was. I tryed scooping it out and the stuff stuck to the spoon and looked like plaque (like what would be on your teeth). After i scooped it it ended up coming back so i just dumped it. I think there's a homebrewing place somewhere near me so ill go by and grab a different jar and try the airlock route instead. In two new england 90 degree humid days it had cultured decently but then this started forming. I haven't tried doing the bug yet though i need to go get some more water. I'll try the suggestions though, thanks!

yeah this my first time doing anything like this, lol i had "quit" dr. pepper and i read up on the health benefits of a natural ginger ale so i figured i would just drink my own stuff instead. I had just googled how to make it and it came up with this site https://wellnessmama.com/8945/ginger-ale/. I dont know if anyone had success with this recipe but if not lemme know

That looks like yeast, especially at the bottom. Mold grows in the air, not under the liquid. If it's warm, you get more yeast.

Do what you can to keep the bug cooler if needed.
OP

Probably hitched on the ginger. A lot of other ferments can get that - pickles, kraut, etc. I think it's called kahm yeast, but I could be wrong.
OP

Hey i think that might be it! That looks almost just like it. So how do you avoid it? Or is that just a part of it all

I think it has to do with temperature - seems like it comes out in warmer weather. Is your bug out on the counter? Maybe try putting it in a basement area or a cabinet? The fridge is too cold.
OP

ill try putting it in my basement, it has been humid and hot here
E

I have a ginger bug sitting on my counter that is a year old. It can be used to make ginger ale even at that age. I even use it to carbonate Tepache or Hibiscus tea. And the Snakebark soda is not only good it is healthy.

It doesn't have added yeast, only the yeast that it gathered from the unpeeled ginger. The other problem I found is that some sites advise to use a cloth cover to gather the yeast. You don't need to do that. The yeast is on the organic yeast. Plain yeast may have been irradiated thus killing off the yeast you need.

I will post the link to a site where I learned to make it all. This is what I do/use:

Bottled spring water
Organic ginger
Organic sugar
A pint jar with screw-on lid (I rinse my jars with organic vinegar first and then rinse well with the spring water. Our city uses chloramine in the water and it can't be boiled out)

Wash the ginger but do not peel. Chop finely, enough for 2 T. Add to jar.
Add 2 T sugar.
Add 1 cup spring water.
Screw top on and set aside overnight.

On day 2, repeat with ginger and sugar. Do not add any water.

On day 3, repeat with ginger and sugar. Do not add any water.

This will be your ginger bug. Use it to carbonate whatever soda you want to make.

The link has three other links with very useful information you can use to experiment. The ginger bug information is near the end of the article.

Silvery white flakes or film are usually just yeast scum. It happens all the time and pickling, you can just skim it off.

Okay, I need help. Glad I found this thread. I’m working on a ginger bug, day 4, bubbles on the top surface and it smells great. however, There are blue vein like things floating in it. Only a handful, Very tiny. I’m wondering if something fell into it or what it could be?Should I rule out mold since everything I’ve found with gingerbug and mold has to do with being white and fuzzy? Thanks

I was on day three without much activity in mine. So I said to heck with it and poured in the yeast from the bottom of a bottle of freshly conditioned and drank bottle of of beer. Boom! - ginger bug hybrid. It made excellent ginger beer - the bottles being the primary fermentation vessels.