As an entry level brewer I did little more than buy a Whitelabs vial, bring it to 70ish degrees, gave it a good shake and pitched it into a carboy full of cool wort. Voila! It worked. Eventually, curiosity, evolution, the desire for better beer, or whatever we are calling it today, took over and I started really researching and experimenting with my process. I quickly (after about 2 batches) made the switch from extract to all-grain. I soon realized how much I really didn’t know about brewing and how many areas of my process needed attention.
I read through John Palmer’s How to Brew, and The Complete Joy of Home Brewing by Charlie Papazian. At the time, I figured the easiest change that I could make would be to start making yeast starters. I constructed a few stir-plates and began making starters with dry malt extract (DME). My fermentations started much sooner and typically finished more completely and with lower final gravity readings.


From DME to Real Wort For Starters 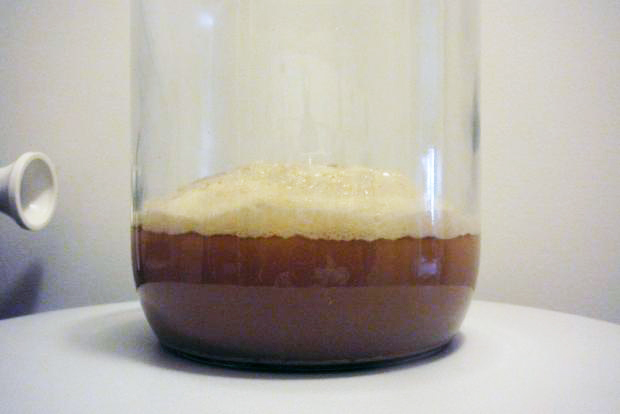 Real wort starter
With a little help from all the fine folks at HomeBrewTalk and countless hours of reading yeast related posts, I began adding yeast nutrients to my DME starters. Everything from DAP to Superfood, and they have also had very positive results with my beer. I can’t pinpoint exactly where I got the idea (there’s no doubt it was from the HomeBrewTalk forums), but a couple of years ago I started collecting second runnings from my all-grain to use for starters. While my batch is boiling, I collect a gallon (give or take) of wort from the grain bed. The gravity is checked and then boiled to get to around 1.040 gravity reading. During that boil, I add yeast nutrients. I then cool it, label it with the date, style of beer and gravity reading then store the wort in bulk in the freezer until needed (you can also store it in the fridge if you can use it soon). This process is also called a real wort starter.
It works well for me in that I have moved to an area where we don’t have a local homebrew shop (LHBS), so all my supplies are mail-ordered. When I am planning a brew day, I remove the wort from the freezer at the same time I order my supplies. Once it is thawed, it goes into the refrigerator with the yeast pack from my order. When the time comes to make the starter, I just pour the yeast and wort into the Erlenmeyer flask with a stir bar, then onto the stir plate it goes. 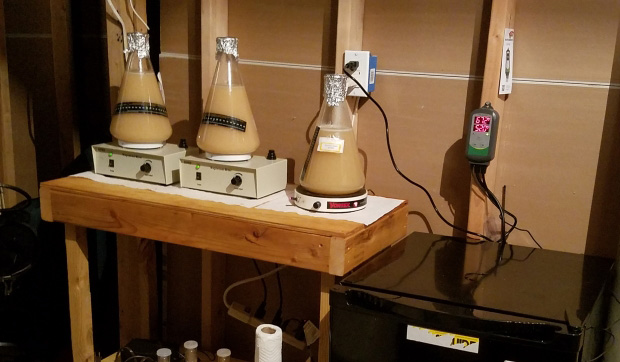 Starters on a stir plate
Although I have no science to prove anything either way, I do believe that using real wort starters from the previous batch (or at least the same style) leads to a cleaner and more repeatable finished product (Anecdotally). Sure, there are different colors of DME and the starters can be custom tailored to the style of beer that is being brewed, but I just don’t think it’s the same. The time spent collecting and storing real wort, for my process, isn’t much different than the time spent on a DME batch. When I do the pre-freezer work during the final boil of the beer batch, it feels that the overall prep time is a little less. Like many things in the home brewing process, preparing the starter either way could take several hours if I let it. I do like not having to worry about having or ordering DME. Without having a LHBS, there have been a couple of times where I had to pitch the yeast from the vial because I didn’t remember to order DME for my starter. If you are a "no-chill" brewer, you can actually make a starter from the actual beer you brewed while waiting for the batch to cool on its own.

From a cost perspective, DME really isn’t terribly expensive, so doing it this way isn’t a huge cost savings. Then again, I am all about driving my cost per beer as low as I can. For me, the real benefit rests within, with my “I made this” pride. This is another part of the process where I am able to get away from using a mass-produced product in favor of something I have more control over.


Making A Real Wort Starter Versus A DME Starter

This chart shows the basic steps to building both a real wort starter and a traditional DME based starter. 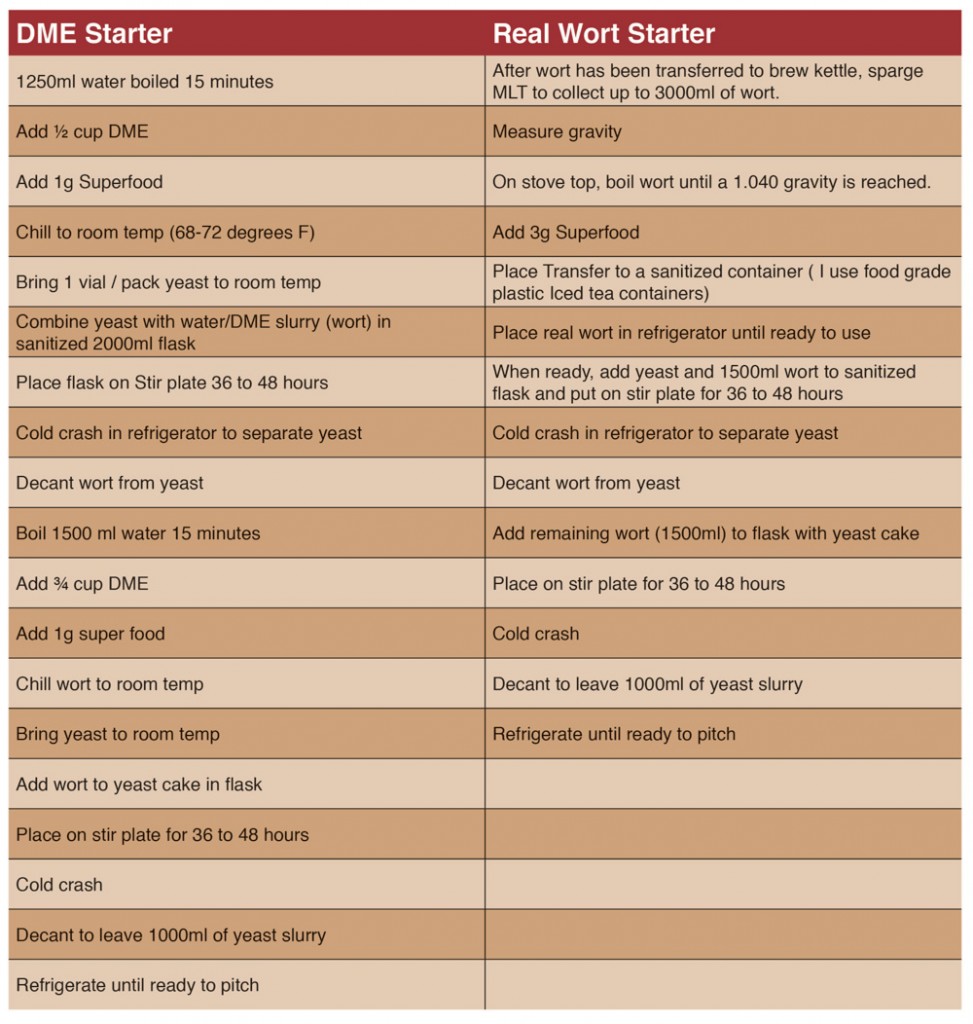 Although, to be honest, I can’t say that I use real wort 100% of the time. The reality is that I am probably only using it 75 to 80% of the time. I am not saying that one is better, cheaper, or fits a particular style better than the other, but it is another option available to homebrewers. To that end, we may not find one item or technique that fits every style of beer or that fits into each and every brew day. Whether brewing is a hobby, a passion or an obsession, at the end of the day each brewer has to find what works best for them. If you use real wort starters, be sure to share your experiences in the comments.