Question for all the vintage refrigerator restorers....

.....how do you get these hinge covers off without ruining them??? 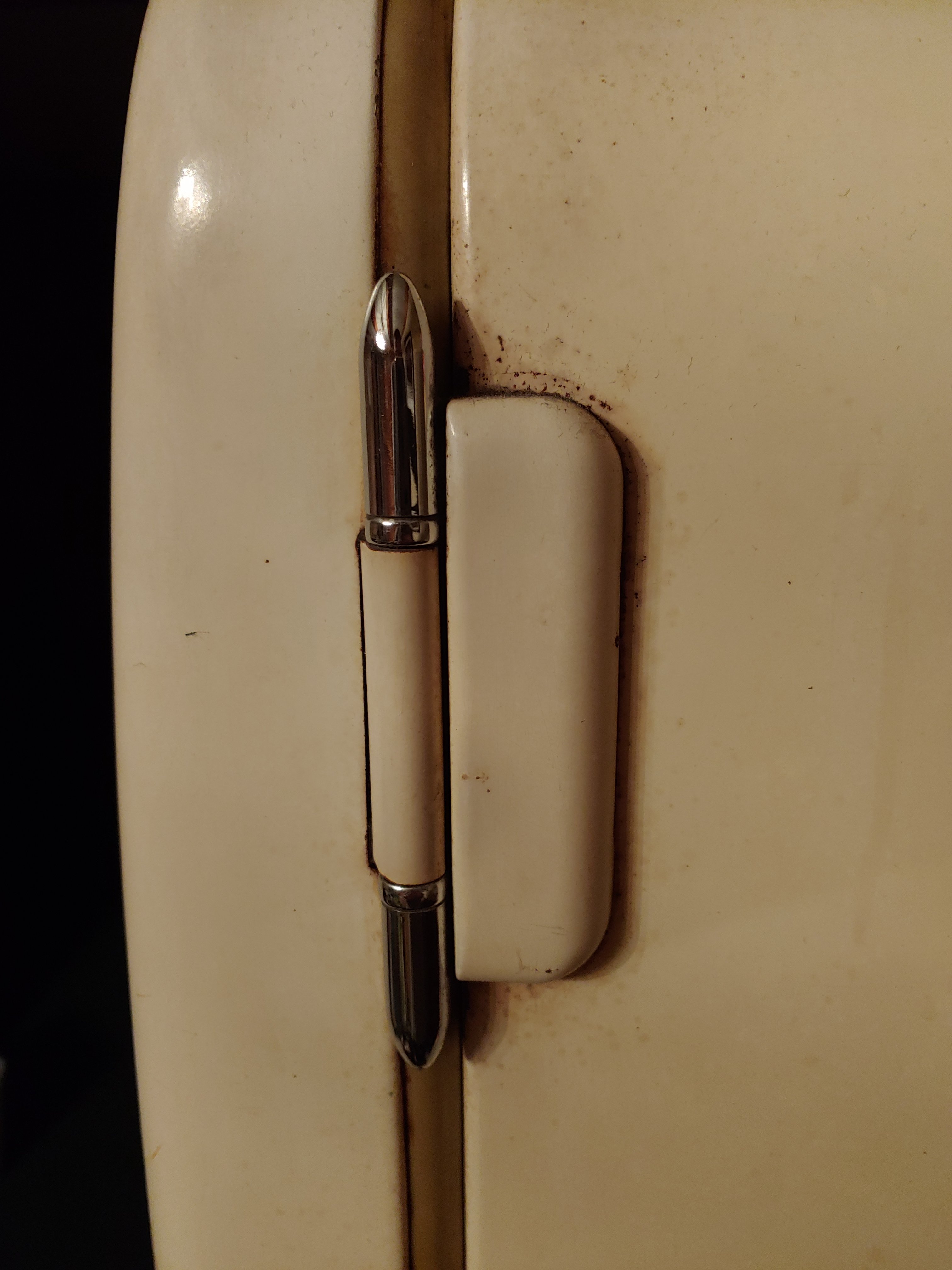 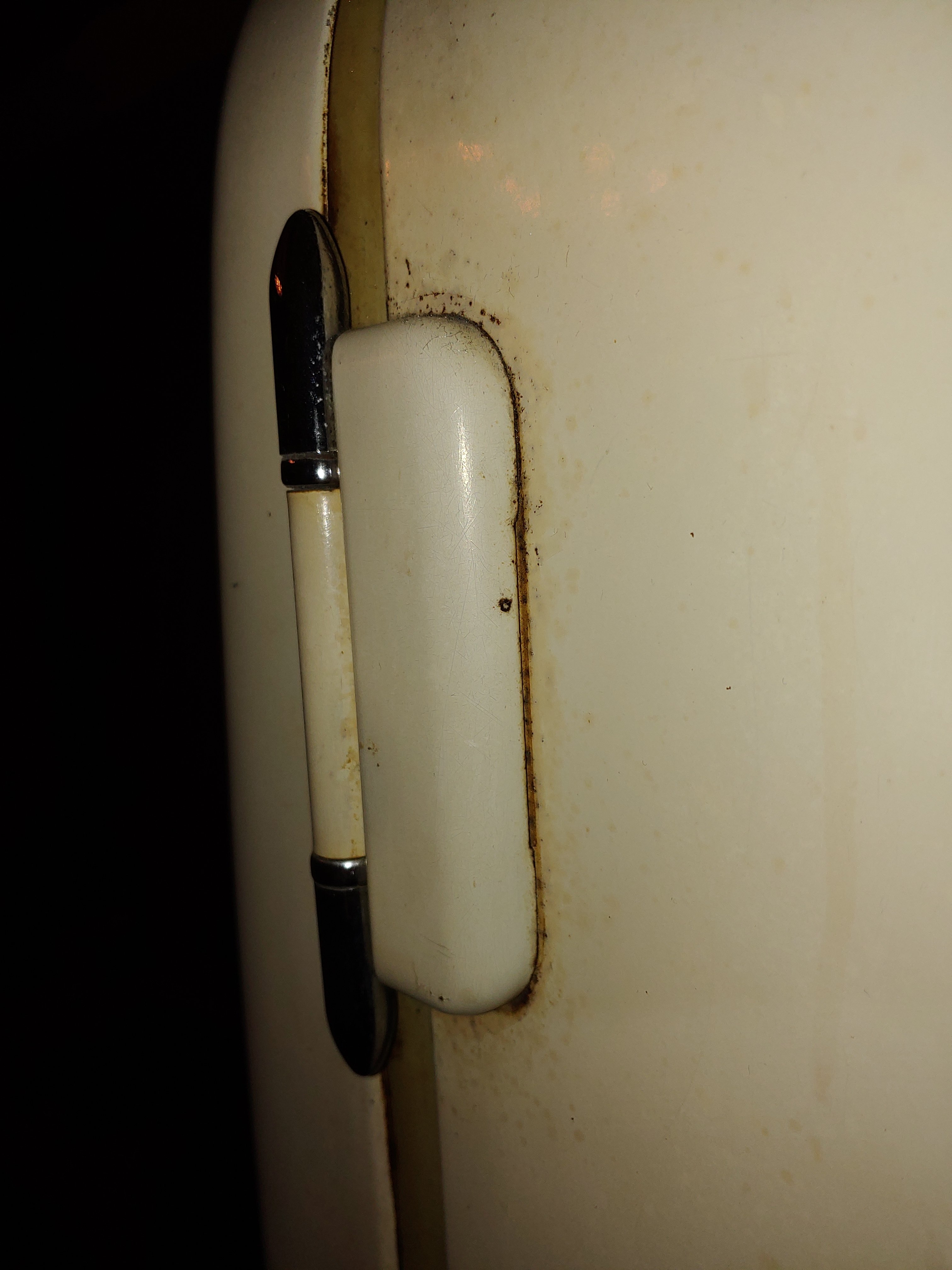 I got this YEARS ago from a sweet old couple back when restoring the old fridges was the next big thing.
It's an old 1950 Weatinghouse and now that I'm FINALLY hoping to use it for what I bought it for, I'm hesitant to just pry them off with a screwdriver unless I know thats the only way.

Are there screws on the inside, perhaps?

Can you see inside the covers when the door is fully open?
OP

Here's the view from the inside 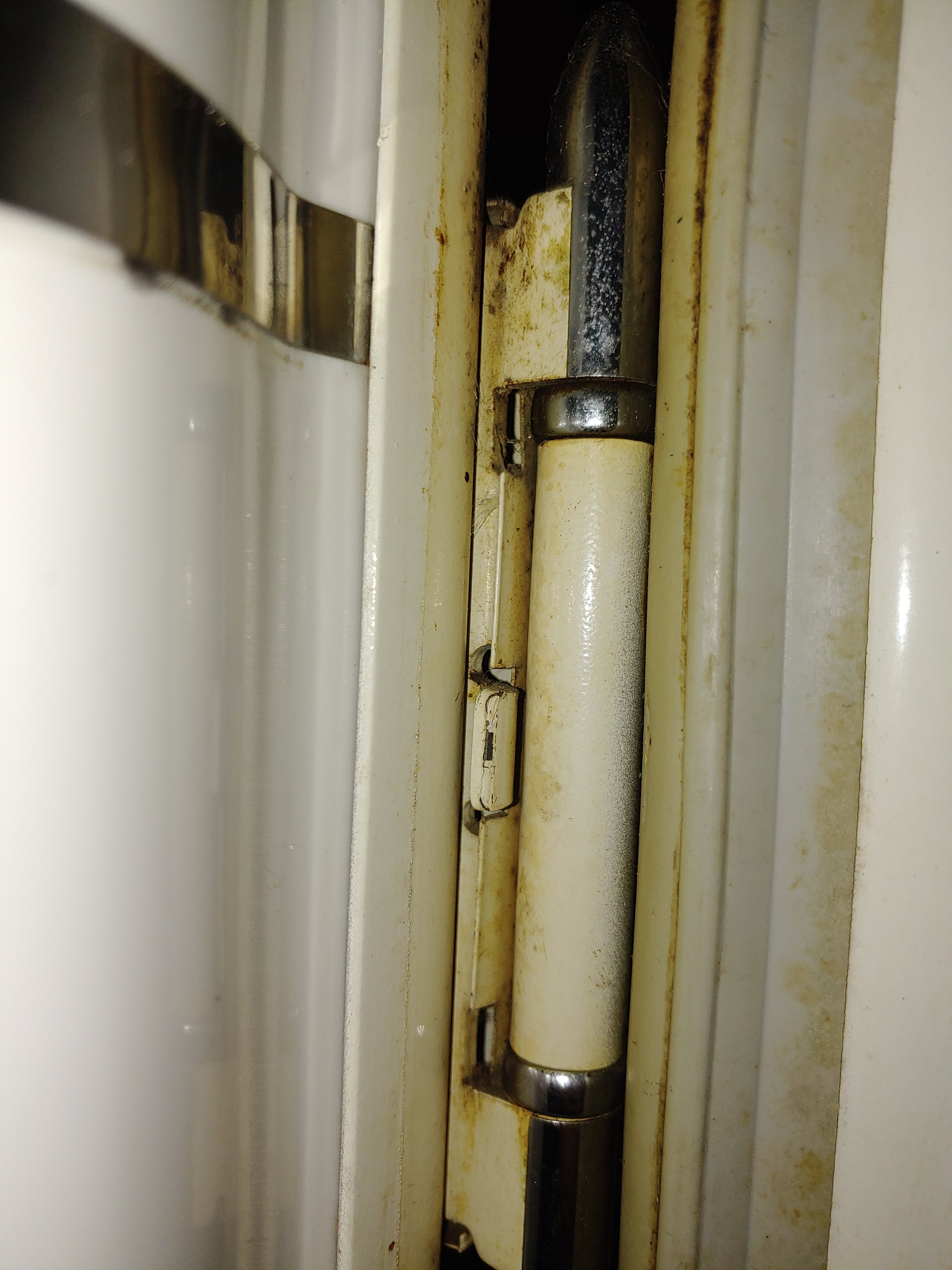 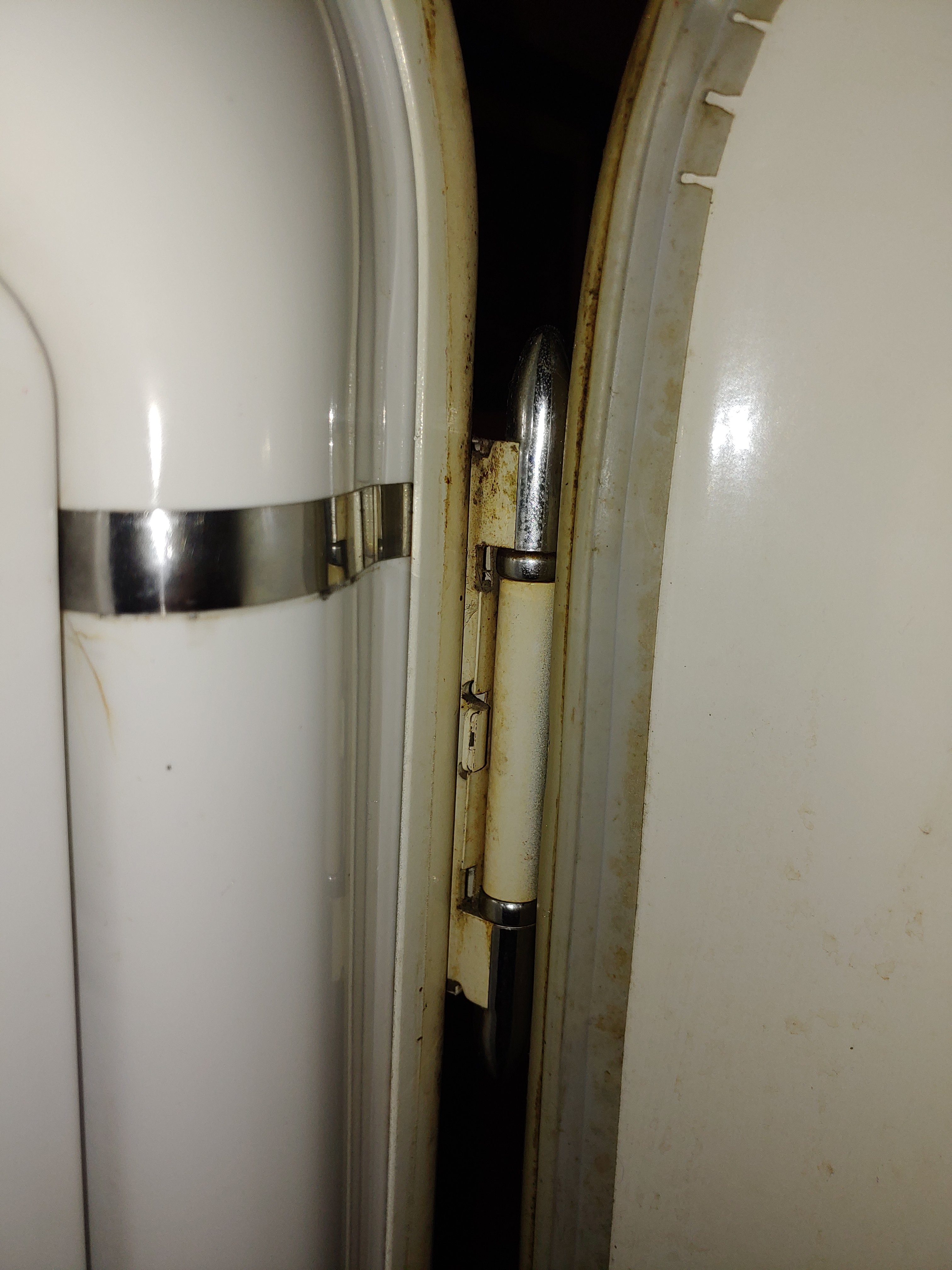 I've seen threads here with old fridges restored to immaculate beauty. IIRC, one was painted bright red. There must be a way to open up those covers. Have you done a site search here? Or in Google, but only with returns from this site:

Can you tell what type of material it is? From that era, I'm confident it's probably not plastic...haha. I hate reading posts like this...now 1) I will find a vintage fridge to restore (I'm always looking for one) and 2) I will end up staying up late trying to find something on the internet to help you.

Haha. Best of luck no matter how you find out (ie. trial & error or if you find the answer).
A

Okay. So I found a site that has vintage fridge instruction manuals. PDF format...looks like it's about $6-$8 bucks. Not sure if that would have the answer to the hinges, but it might be worth a shot?

AJinJacksonville said:
Okay. So I found a site that has vintage fridge instruction manuals. PDF format...looks like it's about $6-$8 bucks. Not sure if that would have the answer to the hinges, but it might be worth a shot?

I'd doubt they'd go into unhinging a door, in that day and age.

Nowaday they do, as many of the larger fridges are transported without doors mounted. That's to get them through the doorways...

I dunno, that looks like a generic "care and use" guide. I'm not seeing anything in the thumbnails that suggests there's technical content, and as I don't think being able to switch hinges and handles to go from right-opening to left-opening was possible I have a feeling disconnecting those hinges isn't going to be covered...
A

The link also has vintage Westinghouse 'service manuals' for different products as well.
Click to expand...

Very much appreciated, brother.
A

No worries man. Best of luck! Keep us posted as you restore it. Are you planning on converting it into a kegerator type set up? Just as a fridge? Just as a fridge with picnic taps inside?
OP

I got it 8 years ago this month. Had/have every intention of fixing it up into a kegerator.
The elderly couple I purchased it from bought it brand new, and turned it into their own kegerator the last 40 years they had it. Complete with plastic Schlitz tap which I still have!
Little rough, but great shape for what I plan on using it for. Until the day I brought it home and the straps broke while turning onto my street and it tipped over and got some nice dents in it from the edge of the truck bed it was in.
Things happened as time passed, and for the entire time I had it it has been our overflow fridge.
But I'm getting that itch again...

I plan on replacing the power cord as the insulation is finally wearing through, and once I figure out the easiest way to get the dents out I've decided I'm gonna pretty it up using automotive vinyl wrap and adhesive chrome trim. 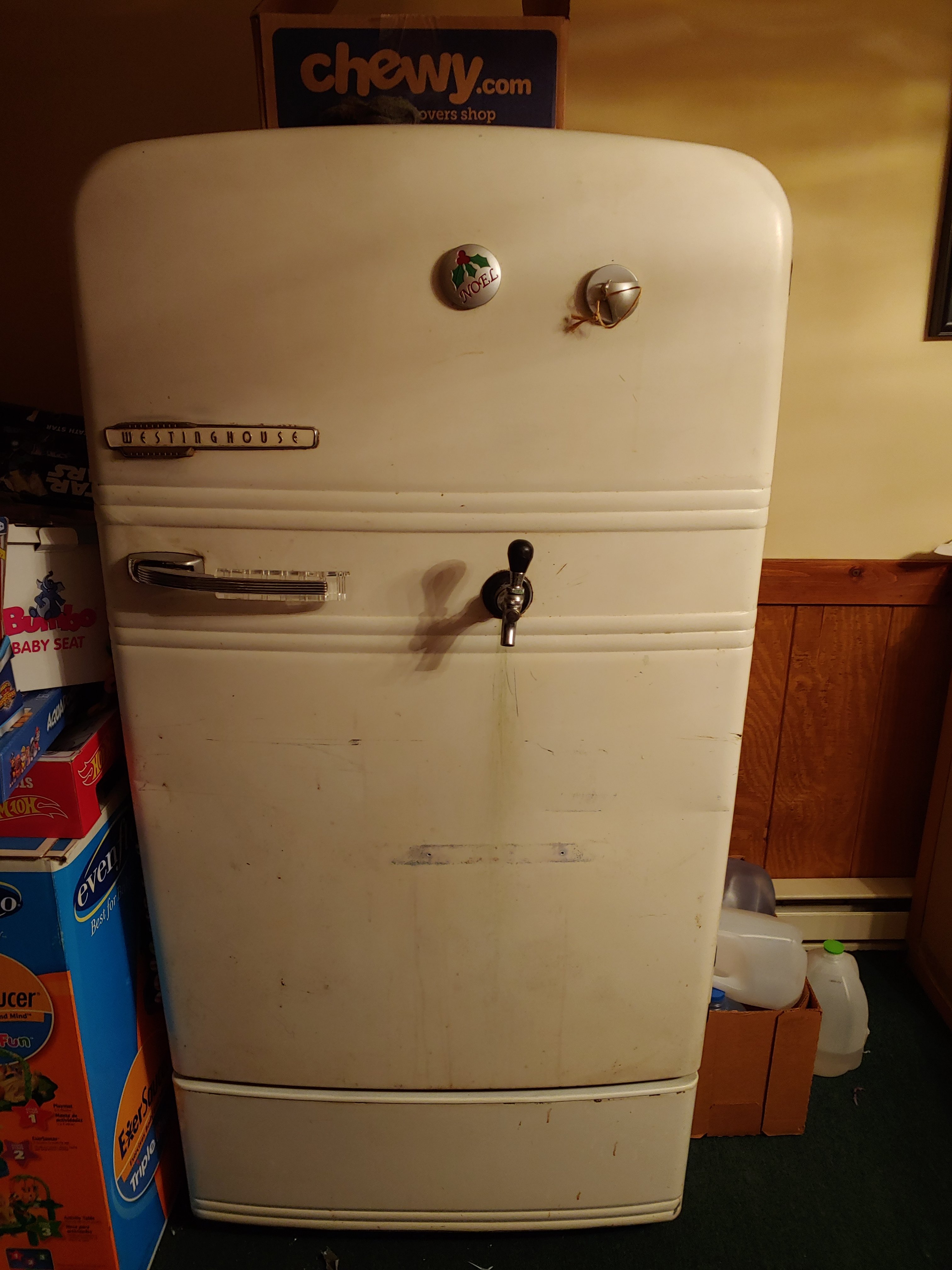 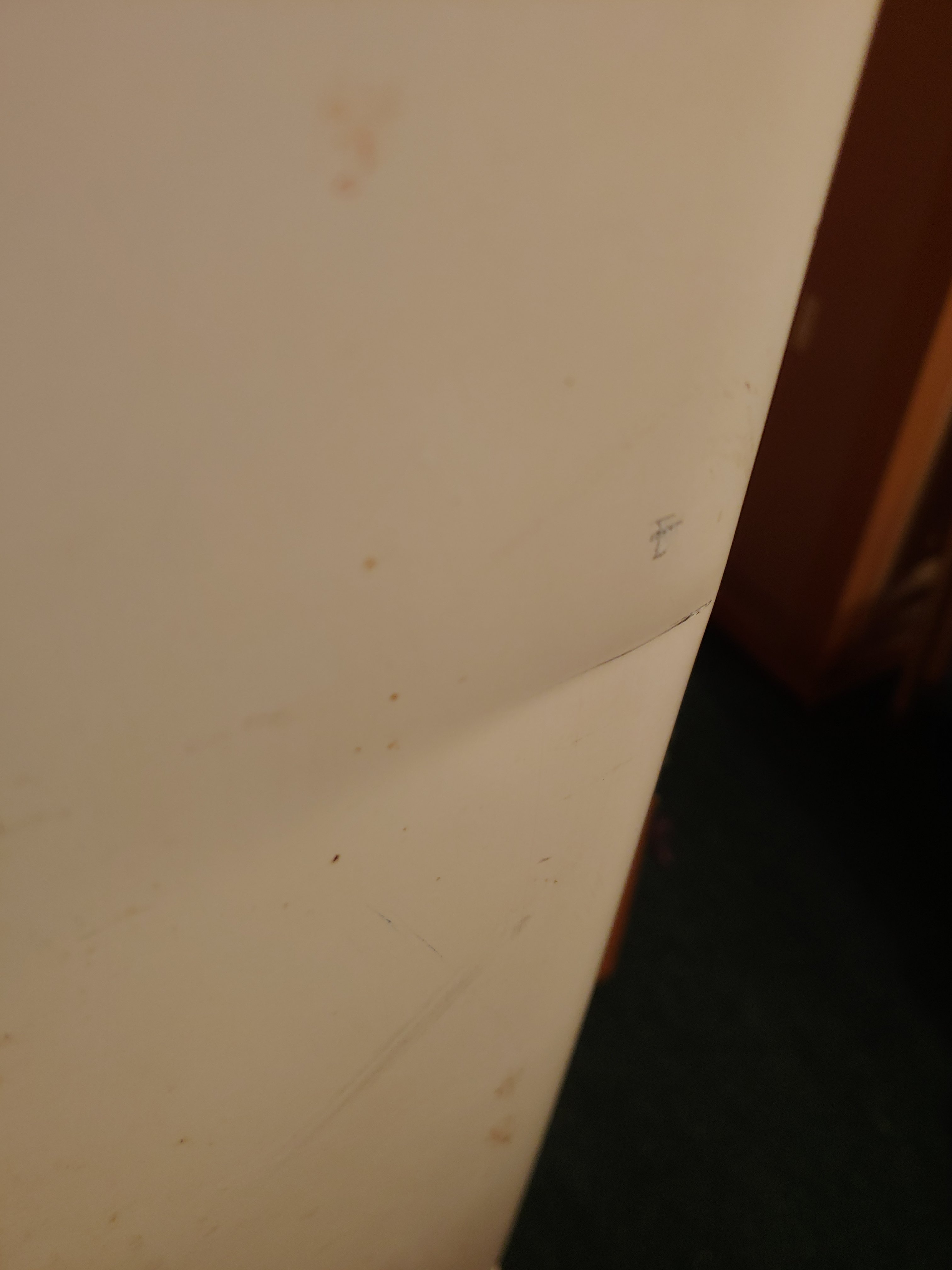 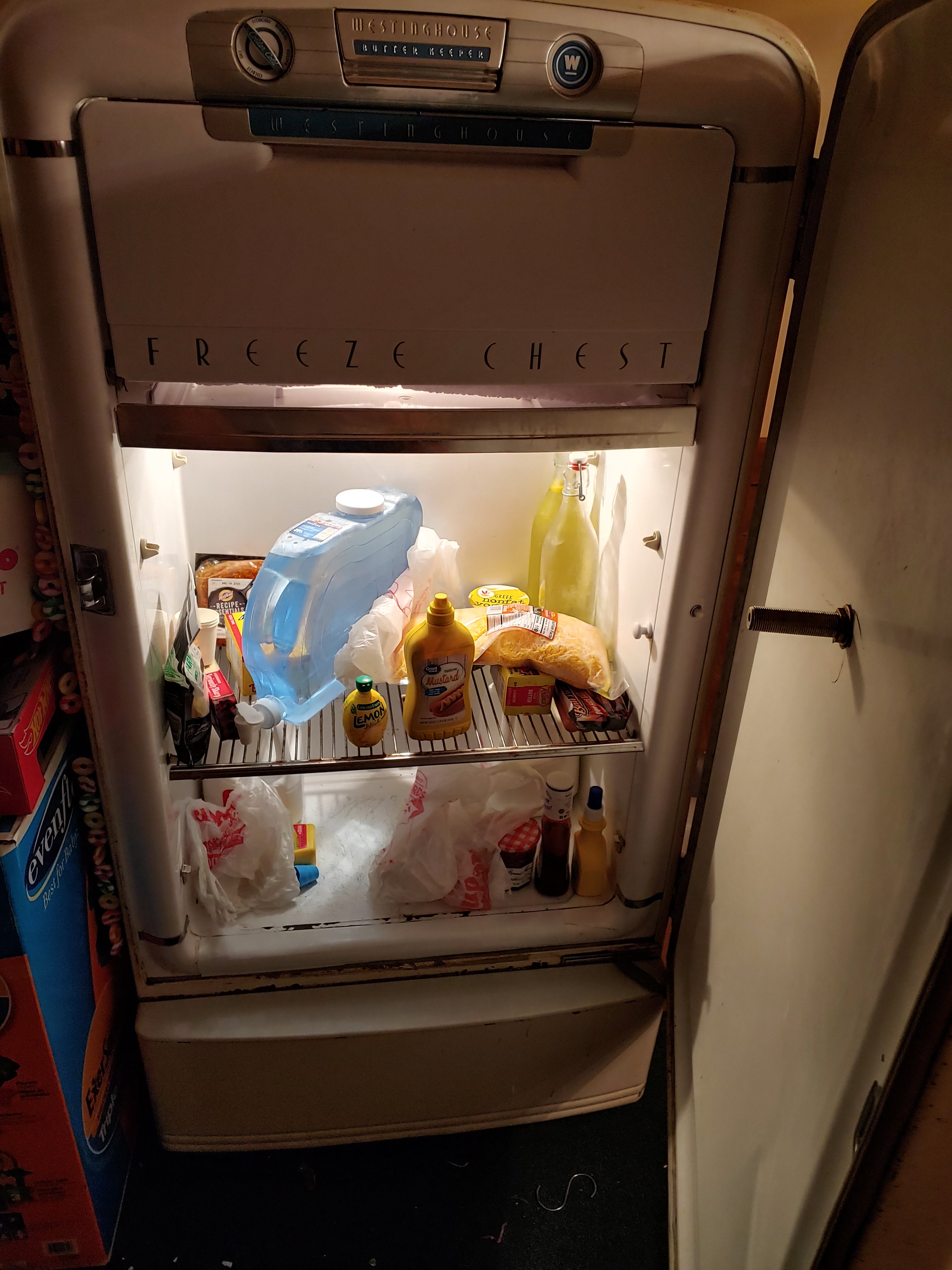 That is awesome. Even more awesome that it still works! I hate the phrase...you know what one...but it's true most of the time...haha.

Don't want to bust any bubbles...
Looks are non-debatable, but I wonder how energy efficient those vintage fridges are. I see quite a bit of frost hanging from the freeze chest.

How many kegs would fit in there, 3 ball locks, without a tank, or maybe with a 5#-er?

They aren't going to be e-star rated but usually they aren't horrible, either.
I bet if the OP goes all-in on a restoration, replacing the door gaskets would help with that frosting.
That said, I'd have to be 30 years younger to roll the dice on that unit...

I have a buddy that has a vintage fridge he restored in his garage for beer (thing looks brand new). The thing is a tank. It replaced a more modern fridge...and he says he has noticed 0 difference in performance or cost to power it.
OP

A new gasket is in the plans one day. The original one on there is still pliable and is showing no gaps.
I've had this thing for eight years, and I hardly ever notice it run. Especially if I keep it on the "Economy" setting (no defrosting, that's where the power sucking came from later in the '50s through the 70's).
It does build up a good amount of ice on the freezer coils, but that is because we are in and out of it almost daily. Before we started using it regularly, it barely built any frost.
In fact, in eight years I've only had to defrost it once.
I can fit two five gallon ball locks and the tank inside no problem. But since I'm a small batch brewer to begin with, I may make it a three-tap jobby for my 2.5 gallon kegs.
Right now the only thing intimidating is refinishing it. It's in a finished basement right now, and I have no intention of hauling it out to refinish and then take back downstairs (it was a near-death experience getting it down there in the first place). So unless I can convince the wifey to help me build an indoor painting booth in the finished basement, it's vinyl wrap for this guy. Of course, I still have to smooth out a lot of imperfections and take care of those two big dents on the edge of the door....Messy to be sure, but hopefully faster than a whole repaint.
All in all, best $25 I've spent.
I have a small wine fridge and a Kenmore kegerator that I hear run more often than this thing lol.

I would like to get a meter to watch how often it runs, but just strictly out of curiosity.

I'd bet to pop those hinges you've got to remove the cosmetic cover on the door itself. then pull the screws attaching the hinge to the door. It will then be left only attached to the outer body of the fridge.
typically the lower hinge supports the weight of the door and the upper hinge just supports the door from rotating away from the fridge and pulling off
you may have to destroy one of them while pulling the hinge pin out in order to see what's underneath it. It may be threads or it may be some other kind of means of retention. But either way without a diagram or technical drawing you can't easily tell what's there because it's likely bound up with rust anyways. So I would recommend trying to get one loose with some brute force and then you'll learn how it's designed. And you can use that to better remove the other. But you're going to have to count on probably replacing at least one of those attractive bullets that supports the top of the and bottom of the hinge pin.
Edit: to clarify, I am just talking about pulling the bullet off with maybe a hacksaw or pliers in order to get the hinge pin out. Try not to destroy the hinge plates themselves. and make extra caution to not pry the hinge plates away and cause damage to the mounting holes onto the fridge body or door itself.
Last edited: Jul 17, 2020

I have an early 90's GE fridge I got for $1... (still made in America at that point if I'm not mistaken)...
Thing is a tank...
I've made a few mods, the quality is apparent in all the hardware, materials, design, etc...but the compressor technology and controls are not as advanced as modern day of course.
OP

Got 'em.
Tried it from the front and nothing.
Tried it from behind and as soon as I put pressure on one of the two tabs you see here it sprang right off.
I was able to get one of the chrome tips off, but the others won't budge. Maybe a good blast of WD40 or two or maybe even some RemOil and that may loosen up the underside a bit. 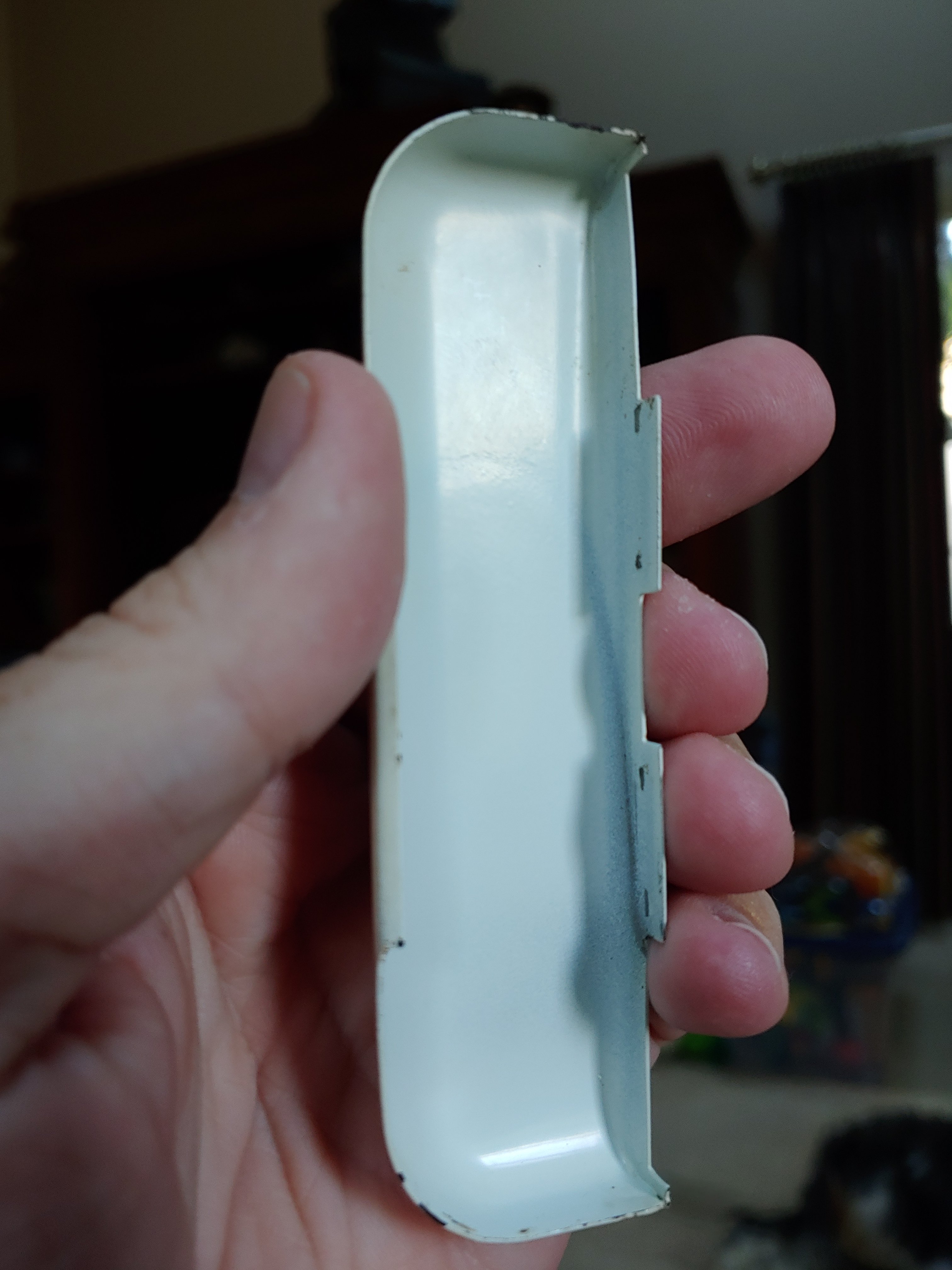 Any compact refrigerator for 3 cornys?

Best type of refrigerator for kegerator