Named this one after my girlfriend told me our dog was a pure soul, and he's about the same color as this lovely brew. I have convinced several people to admit that they might like dark beers after trying this one. It truly did come out wonderful.
OP
OP

Just a post-aging tasting note...
After four months of aging, I can truly say that what little I have left is one of the finest porters I have ever tasted. I'm so in love with this brew that I'm actually considering entering my last several bottles in a competition (it would be my first) just to see what some CBJ's have to say about it....
OP
OP

Here's a review from Evan... 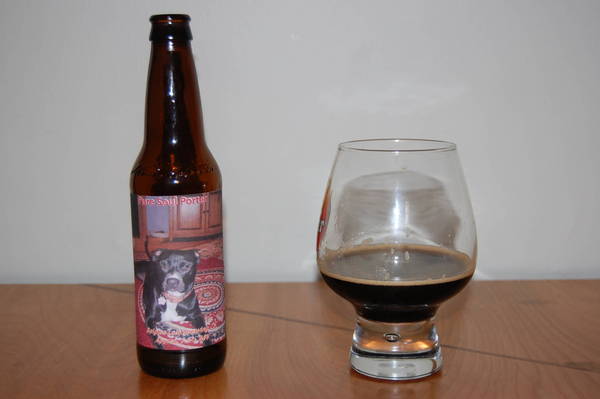 Pour/Aesthetic: Love the labels! I think you're the first one to send me beers with custom labels, and they're very nice. The pour was nice, plenty of original carbo + head, but it dissipated quickly. The color is dark as night with brownish-ruby edges.

Aroma: This is dominated by molassas / maple syrup aromas...which I particularly like but fear it's not really to style. There's also some dark, dried fruit on the nose, and a touch of roastiness. The more I let it sit, the more alcohol it puts off. At the very end, there's a touch of cocoa. No hop aroma.

Palate: Again with the molassas, and the dark fruit, but the roastiness that was all but MIA on the nose is evident here. I'm even picking up a bit of vanilla and something that I can only describe as very faint coconut. The mouthfeel is pretty standard, not too heavy, and this is showing itself as a nice quaffing porter that doesn't take itself too seriously. No alcohol burn, no hop flavor, nice bitterness balance. The one flaw I notice is that a couple minutes after taking a sip, your tongue takes on slight but unpleasant astringency. Yuri found this in a couple of my beers and suggested messing with my pH, but I dunno. It's really subtle so don't sweat it.

Proximity to Style: Not quite roasty enough for a robust porter, but it could pass as a brown porter. Plenty of fruity notes that I expect from brown porters. Perhaps a bit too much molassas character on the nose.

Overall Impression: A great little balanced quaffing porter. Easy drinking, not too serious (my porters can tend to be an undertaking in a bottle), and well-made. Thanks for sharing!

Note:
After the third batch brewing this I figured I should make a few notes on here. I have added just a touch more Chocolate, maybe an extra four ounces. Due to the fact that I've run out of Nugget, I hopped the last one with Cluster for bittering and started hitting it with an ounce of Fuggles at about 15 minutes or so. Still a great one and getting ready to brew it again. This is definately my "I really need a beer" beer.
B

I have brewed this 2 times and have been quite pleased with both batches. Thanks for the suggestion to add a bit more chocolate, I will try that next.
OP
OP

Iam bery very honored by this. It makes me soproud t o see that someone both breweed my beer and liked it. It is ont only my favorite beer that I make but the first recipe that I designed myself. And I love my dog that I've named it for. Now I just need one for my crazy other dog. He'll definately invove some wiled yeasts he's razy!
OP
OP

Flavor
Malty, roasty. Some fruitiness. Nice bitterness bite. The alcohol is well hidden. Some other flavors I cant quite identify.

Overall
Great beer. I loves me some porters and stouts. I will have to steal your recipe and compare it to mine. It has none of the overwhelming properties of some of the porters I have tasted. Well balanced and well made. Thanks for sharing.
Click to expand...

Another review, thanks Amiaji
OP
OP

Got some scores from the Michigan State Fair on my third or fourth batch of this brew (I don't remember which one I entered!)

Flavor:
1) Bitterness, not much for roast, coffee, or chocolate flavors. Has the roast malt dryness without the flavor. Everything is really subdued. 10/20
2) Low malt flavor. Roastiness is there. Finishes dry and roasty but still little aroma 11/20

Overall Impression:
1) Not bad just really subtle with both flavor and aroma. Lacks malt complexity. 6/10
2) Slightly anemic for a robust porter. If there was more malt character it would be much better. Still a very drinkable beer. 8/10

Not the best scores, tough judges, but in the spirit of openness I thought I would post them here. I feel that I may have erred in entering robust porter rather than brown, but I did what I felt was right. I feel that sometimes the robust porters get held to more of a stout expectation, but that may be my misenterpretation of style. Anyways, still one of my favorites! Let me know if you brew it!
OP
OP

Version 4.0 is just now in the fermentation chamber. Went back to second recipe and tweaked that one a bit, wasn't too happy with the third one...I'll let you'all know in about 5 weeks or so.

Thanks for keeping the thread updated. I will have to give this recipe a shot sometime.
J

Just curious but I am having having trouble figuring out how to go about brewing this one? could anyone give more in depth instructions I have had similar porters and think they are awesome!
OP
OP

Hmmm....haven't touched that last one (v4) since that last post in september. Still sitting in the secondary in the basement. Hopefully my newfound brewing motivation will lead to this beer making it into a keg!