As a starter, I'm still fairly new to the brewing ins and outs as this is something I've picked up during quarantine. My buddy and I have brewed about 70 gallons+ of beer since late July, with many successes! On our most recent batch, I've noticed some particulates in the fermentor that I've not seen on any beer we've made previously, and can't quite find on any forums or chats. (I've been looking for a couple of hours now.) I made an account to get your all's opinions and hopefully some peace of mind and a solution possibly for moving forward.

I'll attach some pictures below but what I'm seeing, I can only relate to as "snowflakes" all throughout the beer-- All throughout it. They don't appear to be moving but suspended perfectly throughout the entire thing. They are best pictured in the second image.

We are currently, 20 days into fermentation on a Hard Root Beer, (brewed an English Porter grain bill with the rootbeer ingredients: sassafras, sasparilla, licorice root, anise added at 5 minutes to the end of the boil). We used a tablet of Whirlfloc at 10 minutes to the end of the boil and pitched our Safale-04 @ 72°F (dry but started the night before. Also, this is the first time I've used S-04). I've kept it fermenting in my basement which has been around 60°F give or take. The beer itself is around 61°F at the moment. The OG was 1053 and is currently at 1024. This is not yet close to our estimated FG and it does appear to still be fermenting, although incredibly slowly. (thoughts?) I'll be checking it with my refractometer over the next couple of days. (The larger "floaters" alongside the particles on top in the fermentor are Wintergreen leaves and Vanilla bean pods).

My questions, I guess, are: Are these particles simply suspended yeast? ...I've seen what whirlfloc does before and this seems way more spread out and not as clumpy and definitely not dropping, hence the "snowflake" term. Snowflaking is something I found only to have occurred with old and stale beer... It's been nearly 3 weeks and this stuff is still suspended. It wasn't something I noticed when racking to the fermentor. Do you think that cold crashing, once it's finished fermenting, will help clarify this? ...Are there any clarifiers you'd recommend now that fermentation has begun? Any help would be much appreciated.

I taste-tested the beer last night and while bitter (back sweetening was always the plan) it tasted fine, like bitter hard root beer! It doesn't appear to be an infection but I don't want to have particles this visible in my beer, haha. 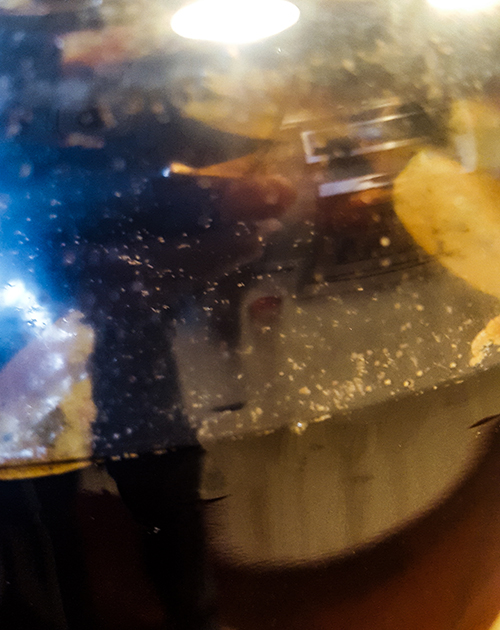 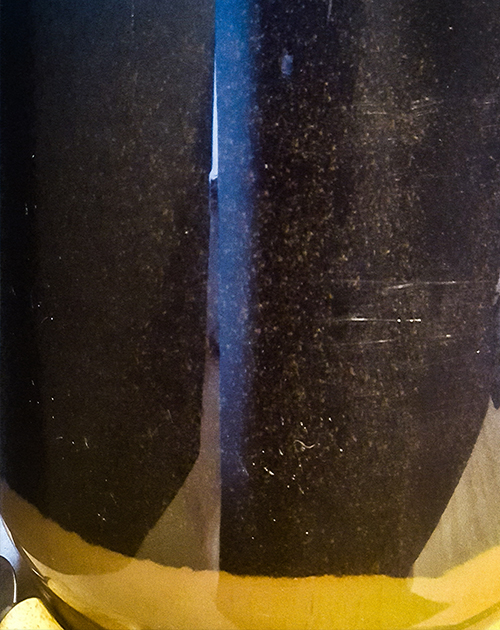 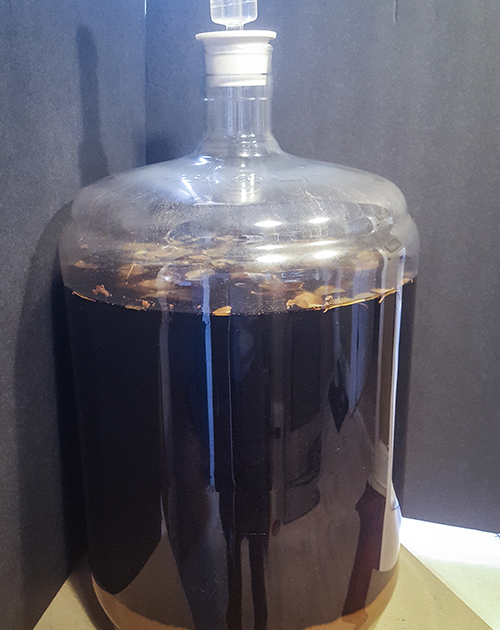 @Jag75 They do appear to have the appearance of yeast particles, but the way that they are suspended and "snowflaked" throughout the entire beer is what has thrown me off, and just seems plain odd. This beer has been sitting for nearly 3 weeks now. I first noticed them yesterday after coming back home from being out of town. After observing them last night, I checked back today to find that they really hadn't moved. As I said, I'm used to seeing the effects of whirlfloc, Irish moss, heavy fermentation, etc., but this suspension of trub (if it really is that) is quite strange and not very tasty looking, haha.

I've never used that yeast. Hopefully someone who knows about it will chime in.

the saison I kegged today was looking like that up until I cold crashed it, and all of it dropped away after a couple days. That being said, being so far from your estimated FG, i would give it a swirl and try to bring the temp up to at least 66 and see if you can kickstart the yeast to finish fermenting. You are right at the bottom of it's optimal temp range so the majority of the yeast may have got lazy and flocced out early.

It does look like the fermentation is done, might be yeast that’s flocculating (clumping) that hasn’t reached critical mass to sink. Or it could be proteins for whatever reason that remain suspended. I wouldn’t worry too much about it and when you cold crash it will likely drop out.

edit:
I reread and saw your gravity readings - agree that might be a stalled fermentation, small temp increase and some swirling to get the yeast up again might indeed be in order.
OP
OP

@Elric @Brewsit I think that that sounds like a plan. I'll give it a swirl tonight and see what that does. The temp might be a bit harder for me to bring up. The basement is pretty stasis, temp-wise, year-round. Being an earth-basement, there isn't much in the way of temp difference or the manual ability to change it.
I've tried fermenting in while keeping it covered in our backroom but the house tends to be too warm. Any suggestions on a budget-friendly way to bring that temp up downstairs?

I recently bought a seed matt from inkbird to help with temps. in winter my basement is around 65, but I was doing a saison I wanted in the low 70s so i plugged in the seed matt and kept it an inch or so from the fermenter. Before I bought the seed matt I was using one of my muscle heat pads to accomplish the same thing, you could try that if you have any handy.

These heater wraps work great, you can just tape it to the outside of the fermentor and plug it in, or plug it in to a rheostat type controller like they make for reptile heaters.

The FermWrap Fermentation Heater is a carboy heater that can be used to help you control fermentation temperatures. A simple yet effective and reliable fermenter heater, the FermWrap also qualifies for free shipping!

at your temp you can probably just plug it straight in and it will get you to mid to high 60s super gradually.
OP
OP

@Elric @Brewsit That's what's up. Thanks, y'all. I'll update down the line with how it all goes.

L
Stuck fermentation with every batch so far

Golden Coffee Stout - How does it look?