Back in 2012 there were only 5 craft breweries operating in Columbus, OH. This wasn’t many for the 15th largest U.S. city during a time that craft beer was taking off. Nonetheless, a homebrewer living in Chicago and a fellow Ohio State University alum came together to try and add to Columbus’ lagging craft beer scene. Adam Benner and Walt Keys launched a Kickstarter campaign that year as a proof of concept. They wanted to know if strangers would support their efforts if they went through the trouble of opening a new brewery. In just 60 days, they managed to raise $30,000 and knew that they had chosen the right home for their budding dream. However, convincing people to hand them $30,000 turned out to be easier than finding a brewery location. The contract for the first building they chose, in nearby Grandview Heights, fell through in the final stages of an agreement. It would end up taking them two and half years to find a home for their brewery after gutting and renovating their second building choice. A decrepit 1920’s building. In October, 2014 Adam and Walt finally opened the doors to The Land-Grant Brewing Company. It was named after the Land-Grant College Act of 1862, which granted land to states so they could fund new colleges. The Ohio State University, which Adam and Walt hold dear, was founded by this very method. 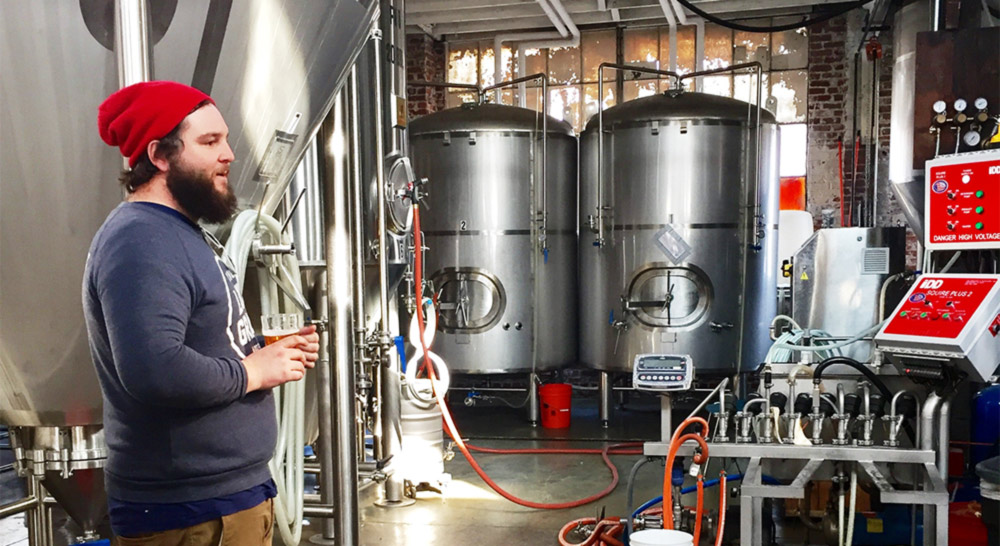 The brewery is located just across the Scioto River from downtown Columbus, at 424 W. Town St. It’s a modern looking building with wood slats adorning the front and large glass windows overlooking the residential street it sits on. On the Saturday afternoon that I visited, it happened to be 65º and sunny outside, so their small deck was packed with people taking advantage of a rare warm day in the middle of Ohio’s winter. Several people were also lured outside by the “OH! Burgers” food truck that was forming a line in their parking lot. Inside I found a 3,000sqft taproom with about 15 beers on tap and bench style seating. Most of the beers on the list were Land-Grant’s but there were also a few guest beers available. I walked into a smaller room towards the back to find a couple of couches and a slideshow documenting the renovations they made to create the brewery you see today. From that room, only a window was separating me from their 9,000 square feet of brewing space. 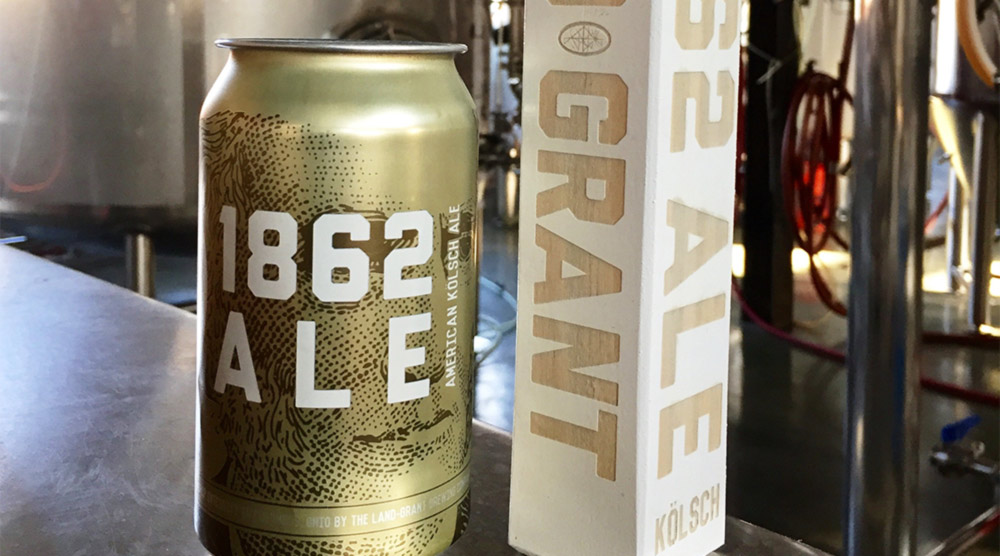 The brewery side of Land-Grant has a lot of character. It’s a clash of original brick walls and tattered windows which surround new, state of the art stainless steel brewing equipment. The center piece of the brewery is a 20bbl Sprinkman brewing system which has replaced Adam’s turkey fryer from back in Chicago. Behind that is a variety of fermenters that have accumulated as the company has grown. The smallest is a 20bbl fermenter which mainly sees experimental batches. Then there are a handful of 40bbl fermenters that Land-Grant started with and still uses for main production today. Finally, there are 2 large 80bbl fermenters that almost hit the ceiling. Those have been added to try and keep up with growing demand. Walt (shown giving a tour in the picture to the left) commented that the 80bbl fermenters are typically used for their IPA’s which should be no surprise for craft beer lovers. Hops will always be king! With all of these combined, Land-Grant was able to pump out 3,000bbls in 2015, 6,000bbls in 2016, and is hoping to hit 8,000bbls in 2017. That is some serious growth for being open just over 2 years, and I don’t think demand will be their next issue.
By heading further back in the brewery you can find the centrifuge that Land-Grant uses to filter their beer. By spinning their finished beer, they’re able to remove residual grain, yeast, and hops from the beer before they keg or can it. So the customer always gets clean, crisp beer. Speaking of canning, Land-Grant was actually the 1st craft brewery in Columbus to can beers on their own in-house line (see below). It’s funny to think that just a few years ago cans were only recognized for cheap beer. Today, canned craft beer is widely accepted (even preferred) for its greater protection against spoilage and is still growing in popularity.

Land-Grant is currently focused on distributing their beers in Columbus, but some items occasionally make it over to Cincinnati and Cleveland for a few lucky souls. One of their employees actually takes a few kegs to deliver in Cleveland when he goes home to visit his family. Adam and Walt expressed interest in distributing beer further across Ohio, but for now Columbus is all they can keep up with. One thing I really liked about Land-Grant was that even though they’ve gone from a handful of employees to 30 already, they’ve managed to maintain their humble startup roots. They still self-distribute all of their beer using 3 full time drivers and both of their wives work with them at the brewery! That qualifies for a family business. Even their lead sales manager Joe, has ascended from his original position as bartender. To Adam, building a team that he and Walt could trust with their company was the most difficult task he’s had to overcome so far. It was a necessary stride though. The team you see today has been essential for Land-Grant’s success.


More About the Brewers at Land Grant 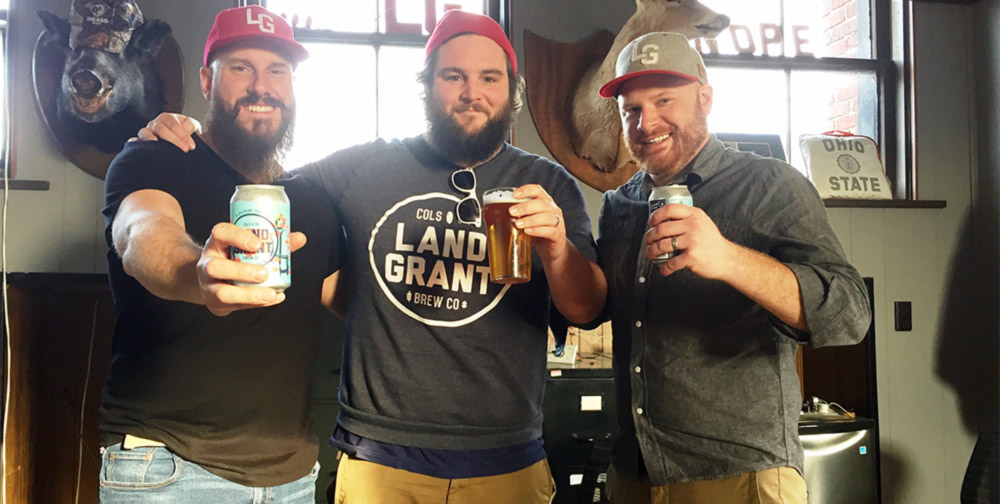 When talking to Adam, Walt, and Mark (described to me as a jack of all trades), it was clear that they were still working hard to make the most of the company. When I asked if they’ve had a moment yet where they felt like they “made it”, they gave me a strange look and laughed “nooo”. Adam was quick to comment though, that the first time he and Walt bought their own Stiff-Arm IPA at an Ohio State football game, was a proud moment of reflection for them. While on the subject of football, they added that their tradition of drinking a can of Coors Light early on OSU game days was still very much alive. You can’t have all work and no play! Even though these guys live and breathe craft beer, they haven’t become snobs.
These guys have come a long way from drinking Pliny clones out of bowls and collecting dregs from Orval bottles, but they’ve stayed true to their passion and we’re reaping the benefits. During our interview, I was able to try Misconduct (an imperial rye IPA) and Stevesy (a Helles lager). Right off the bat I told them that I’d buy the Misconduct again. For me, the rye added a perfect bite to an otherwise smooth imperial IPA. It’s my favorite Land-Grant beer that I’ve tried so far. The Stevesy didn’t last long either as it was truly an easy drinking lager. When I prompted them for homebrewing advice, Adam recommended sanitizing very well and controlling your fermentation temperatures. He was having flashbacks of an old homebrew batch where every other bottle was good or spoiled. For any homebrewers aspiring to go pro, his advice was to know what kind of brewery you want to be. Some breweries want to remain small and produce one-off specialty beers. Others want to spread across the country and become the next Sam Adams. Each approach is fine, but you will want to prepare for your business model and plan accordingly.
Like every other meeting I’ve had in my life, ours ended with a video game death match. To unwind at the end of the week they often play a game called “Gang Beasts” in their conference room. The game is basically 4 gelatinous characters trying to throw each other in front of a train so they can be the last man standing. It was an odd little game but served its job well by making me laugh. When I asked about the animal heads on their conference room wall, they said it was part of their makeover. Apparently they had entered a contest hosted by The Columbus Business First newspaper and won the title of worst office space in Columbus. Their prize was a free office makeover. So they lost their original wood plank walls and gained some new office furniture, fresh paint, and a couple of animal heads naturally. I really enjoyed touring Land-Grant and hearing about the first couple years for a fast growing brewery.
You can learn more about the company (and see renovation videos) on their website https://www.landgrantbrewing.com, but I recommend you stop by and check out Land-Grant yourself. These are genuine guys, making genuinely good beer. 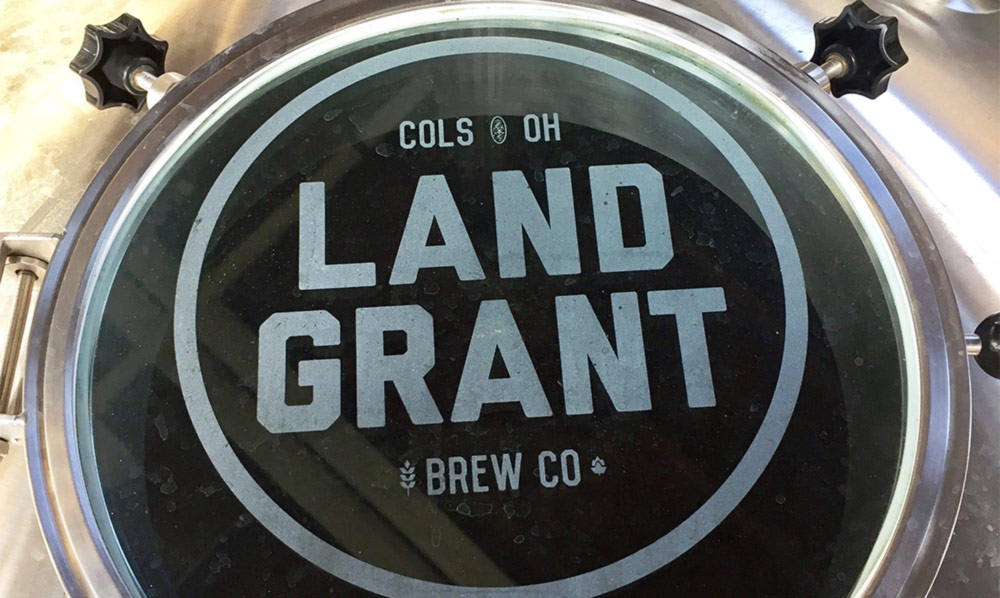 Hey Guys, I love your story and the history in the beer you make! I run a podcast in Delaware on the east coast, and I would love to do a feature episode on one of your beers. This is a first for me, because i usually just get a beer from the store and go about the podcast that way, but it would mean so much more if I could connect with the actual guys who brew, and get a personal connection with the beer that way. Please check out my Link to My podcast on youtube and let me know if you are interested in having a brew featured on a future episode! It would be an honor! Thanks for putting awesome beer in the world! #NurdUp
Youtube Channel for "Beats n Brews" Podcast: https://www.youtube.com/channel/UCOWC2bRwaWFRuw1FYI7eLfA
M

Hey Rob,
I'd recommend following the link at the end of my article, and contacting somebody directly at Land-Grant. The guys at Land-Grant don't monitor this article and probably won't see this comment. Good luck!
J

That was a nice read! I actually live in Grandview not far from Land Grant... Sounds like I need to make my way over there again to see what's up!
M

It's not as cheap as Johnny's but they have a lot to offer!

If you ever fly in or out of Columbus, these guys have a bar and restaurant in Concourse B you should check out.