During my last brew sessions, I made an American Ale and a Hefeweizen. The American Ale brewed up about the same as the last batch that was made, very nice amber color and tastes the same as it did the first batch, still green at two weeks worth of bottle conditioning. It was bottled with a normal slight cloudiness to it, just like the first batch. Opening the primary, it had some foam to the top and trub on the bottom. Normal I hope, it's great at the 4-6 week mark either way...

The funny part, at least to me is that my Hefeweizen's lid was popped to reveal few very clean looking bubbles at the top, probably from moving from the table to the counter and was very clear. Clearer than the American Ale and no top layer of foam. I transferred the Hefe to the bottling bucket via siphoning and bottled. It does have some yeast suspended and falling on day 4 in the bottle.

Using the same technique, aside from siphoning to the bottling bucket for the Hefe (for the spout), is it normal to have a cloudy amber ale and a clear hefe? Seems kind of backwards to me.

Maybe it's the noobie factor. 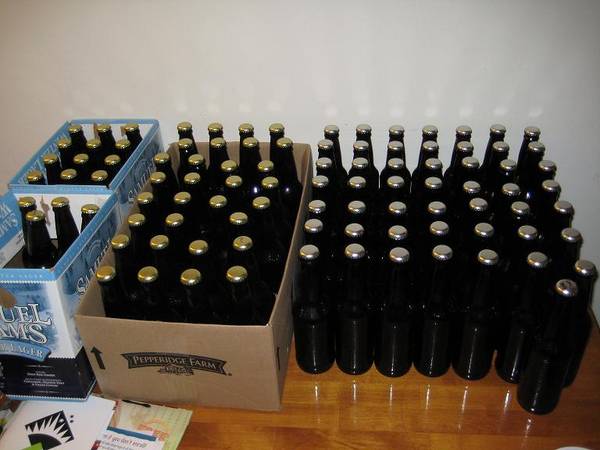 Ale on the left, gold caps and Hefe on the right with the silver caps.

Well, I have no answer to your question as I've never brewed any type of wheat beer and have only brewed a couple ales... but all those beers are sure a beautiful picture!

Yes, it sounds backwards. I'd wonder if you somehow got the two confused? Either way, they probably taste pretty good.