One Perspective on This Beautiful Addiction/Hobby

The enlightened among us understand the addictive and magical nuances present in our favorite passion: orchestrating processes to create utopian elixir—also known as homebrewing.
Homebrewing was effectively legalized on a federal basis on July 1, 1979. President Carter had signed H.R. Bill 1337 on October 14, 1978 making it so. And man, has it grown since then. Homebrewing is now legal in all 50 states and, recently, Puerto Rico as well.
Many homebrewers started with humble beginnings: an obligatory copy of Charlie Papazian’s The Complete Joy of Homebrewing, maybe a copy of Dave Miller’s Homebrewing Guide: Everything You Need to Know to Make Great-Tasting Beer a little later, and more likely than not – a Mr. Beer kit. I had brewed with my Dad many years prior to getting my Mr. Beer, but I still have a couple LBKs (Little Brown Kegs). I also have nearly as many beer and brewing books as I need...nearly, as I can never quite have enough. 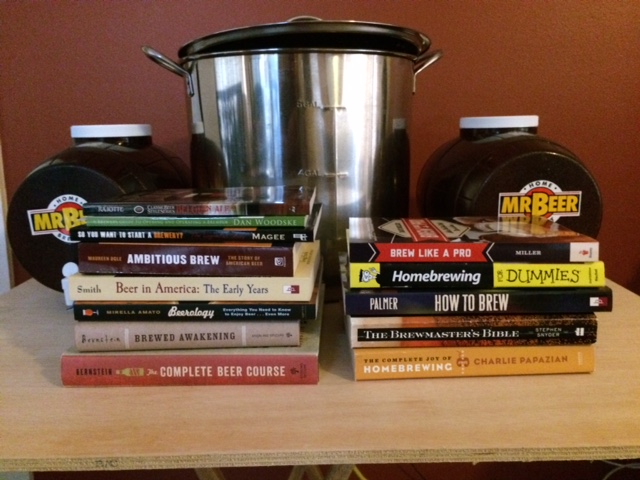 Today we can choose from a dizzying array of resources for our hobby. There is nearly unlimited information. Brewing magazines—a few of my favorites: “Brew Your Own”, “Craft Beer & Brewing”, “All About Beer”, and “Zymurgy” from the Brewers Association, with American Homebrewers Association membership—abound. There are more brewing books, brewing lore, brewing hardware, brewing software, brewing websites and forums than ever before. A simple Google search for “homebrewing” results in about 2,220,000 results. The search “home beer making” begets 205,000,000 results. On Amazon.com, in the Books department, the search “home brewing books” yields 2,249 hits. On Youtube.com, “homebrewing” fetches about 76,900 results; “home beer making” will get you about 507,000. The myriad available is mind boggling. Homebrewtalk.com has 200,000 members. There are more brewing classes available around the world each year. Many universities, colleges and trade schools are adding brewing and fermentation classes, which are frequently sold out. Suffice it to say, there is no shortage of assistance available if one wishes to participate in homebrewing and beyond. Where does it all lead? Your choice. You can brew how you want, when you want, and with what equipment you want. 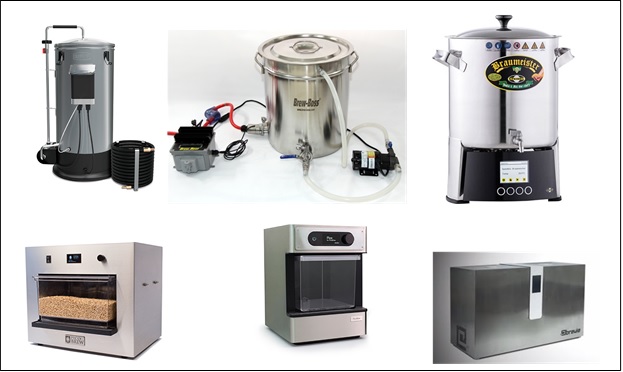 One vessel brewing machines have exploded in the past year.
I know, there are purists out there poo-pooing all this automated heresy. “Uhg, Burp want make gruit.” That’s the beauty of it all. Burp can use a cast iron pot, over an open wood fire, and use a banana tree leaf fermenter, and somehow create drinkable gruit. On the other hand, Einstein and Hawking can look around, with a smile, choose a rig and brew up a scintillating homebrew of their own. Whatever one chooses...enjoy, learn and improve. The American Homebrewers Association (approximately 43,000 members strong) even offers a Research & Education Fund for members. This fund offers the opportunity to submit projects/experiments for approval and reimbursement. There is also a chance for presenting your findings at the NHC – National Homebrew Conference.
Perhaps the ultimate showcase of homebrewing’s evolution is the American Homebrewers Association’s (AHA) National Homebrew Competition (NHC). In 2015, this event judged 7,600 brews! In contrast, the Great American Beer Festival (GABF), a professional show along the same lines, judged 6,647 beers. Recognition of homebrewing’s contribution to the craft beer movement is strong. Jake Keeler of the Brewers Association board of directors and AHA’s governing committee said: “There is no GABF without homebrewers; there is no craft beer without homebrewing.” Jim Koch (of Boston Beer Co/Samuel Adams) adds: “The roots of the craft brewing movement are firmly planted in homebrewing.” Another shining star at the GABF for homebrewers is the announcement of the three winners in the Pro-Am Competition. There were over 90 entries at 2105’s event. Each of these brews must already have medaled in a BJCP/AHA sanctioned event, and been chosen and brewed by a professional brewer. More information available here: GABF_ProAM. Dreams are being realized. There are over 400 homebrew competitions nationwide where one might qualify.
A new record for number of US breweries was set in November 2015. The old record was 4,131 way back in 1873 when there were about 40 million people in the country. At the close of 2015 the Brewers Association told us there were 4,144 breweries in the USA, that for a population of about 310 million. Craft beer had about a 12% market share in 2015 and the goal is 20% by 2020. New breweries are opening at a pace of 2 per day! Where is this all coming from? AHA states that over 90% of professional brewers started as homebrewers. Most start-up breweries are funded by homebrewers. Top craft brewers (Boston Beer Co./Samuel Adams, Sierra Nevada Brewing Co, New Belgium Brewing Co, etc.) are all examples of how far a homebrewer can take a dream. It is estimated there are 1.2 million homebrewers in the USA. How many will go pro?
Homebrewing is one of the most rewarding hobbies I know. The instant gratification of wort, well-created, followed by the magic of science (is that an oxymoron?) in the fermenter, and the choices beyond fermentation. You can make any kind of beer you’d like. Age it, mix it, add fruit to it, spice it, heat it up with chili peppers, or any one of nearly infinite options. If you can imagine it, perhaps you can brew it. In the end it’s all about that eye-popping, eyes wide-open, dancing bubbles on the tongue, THRILL of getting it just right. And then the gripping fear, wondering if you can do it again. Happy brewing!

One more of the big draws of homebrewing are the hobbies within the hobby. It probably starts because you're interesting in beer. But as you go, you'll find other interests as well. Like to build things? Build a brew stand or fermentation chamber. Like DIY on electronics? Go full automation and build a control panel. Not quite there yet? Start smaller; stir plate or temp controller. Growing interesting in the micro side? Pick your poison! Want biology? Go down the yeast bank rabbit hole. More interested in organic, try water for a while! The hobbies within homebrewing are probably why it's captured my attention for so long. I tend to jump hobby to hobby, going 100MPH and flaming out in a couple months. That works well with homebrewing because I can just switch gears for a while and learn more about something else. I also tend to circle back around on my hobbies so I can just pick back up where I left off.
How true about the hobbies within the homebrewing hobby. I find the hands-on and creative aspects appealing. Whether building a recipe, or a keezer, fermentation box, grain bins, etc...
I also find that I thoroughly enjoy reading about all things beer as well. The history and characters involved, the renaissance of breweries in USA and colorful characters this go-round too.
Foraging and/or gardening ingredients for brewing. Sharing the hobby with someone new. Watching eyes pop when people discover that: "Wow, you really can make beer!"
You must log in or register to reply here.
Share:
Facebook Twitter Reddit Pinterest Tumblr WhatsApp Email Link

Killing Four Recipes with One Mash

Killing Four Recipes with One Mash