Did my first brew a few weeks ago - Punk IPA kit from the brooklyn brewshop. I wanted to have something to compare it to, to know if i had done it "right!"

I struggled filtering out the hops after boiling the wort, so eventually it all went into the carboy for fermentation. [image - First Brew - Fermenter]. As you can see the amount of sediment is a little extreme. After 2 weeks I bottled using honey as a priming sugar.

Despite this, the beer turned out fairly close in flavour to the Punk IPA (swiss flag cap is the home-brew), although much cloudier, with a LOT of carbonation, and a somewhat metallic aftertaste [image First Brew - Results]

So, on the second batch, with a (sanitised) strainer we managed to extract the hops after boiling the wort, resulting in a much cleaner looking beer in the fermenter. [image - Second Brew - Fermenter I]

Now, 2 weeks after fermentation started, as I get ready to bottle this second batch the colour has changed significantly [image - Second Brew - Fermenter II]

I am hoping that this change in colour is as a result of the sediment coming out of suspension. On the true at the bottom there is a clear white line of yeast, and then a cloudy/not quite settled layer of what looks like very fine particles.

If anybody has any thought/experience, I would be pleased to hear them! 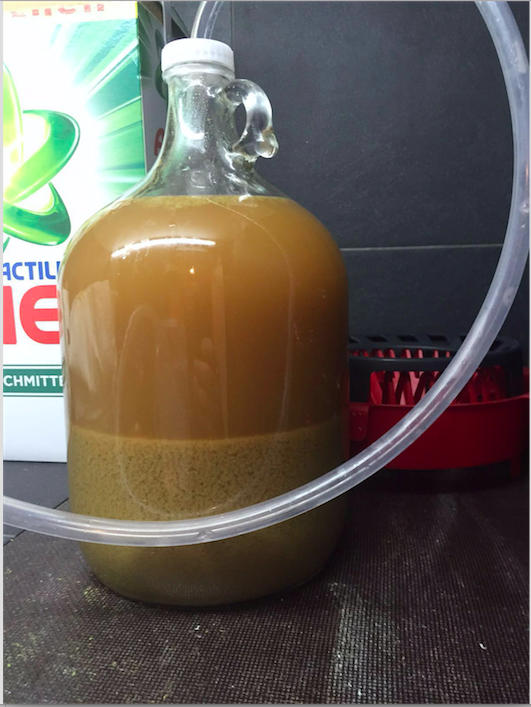 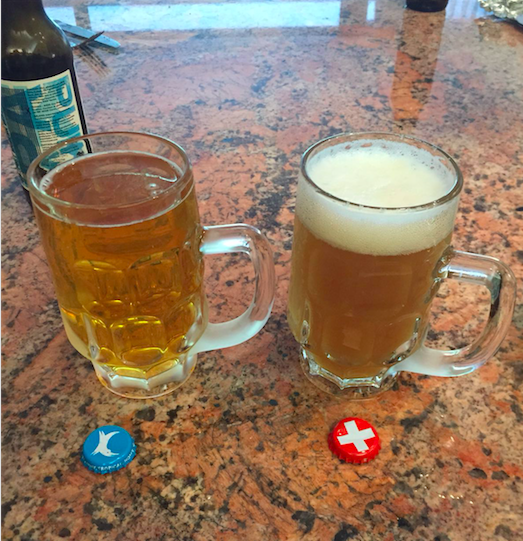 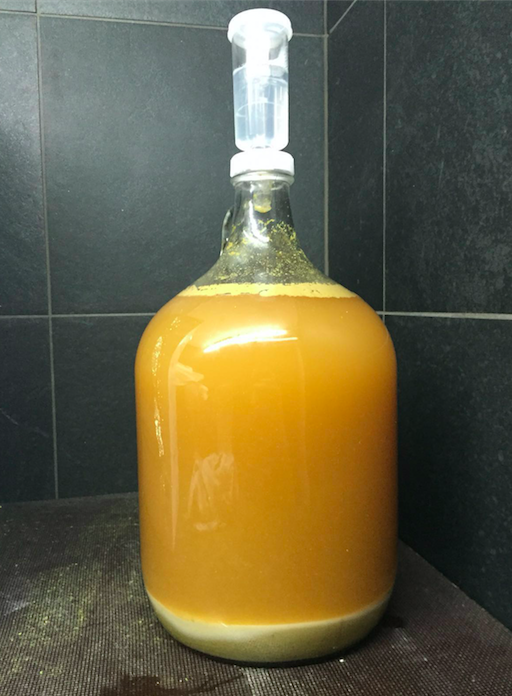 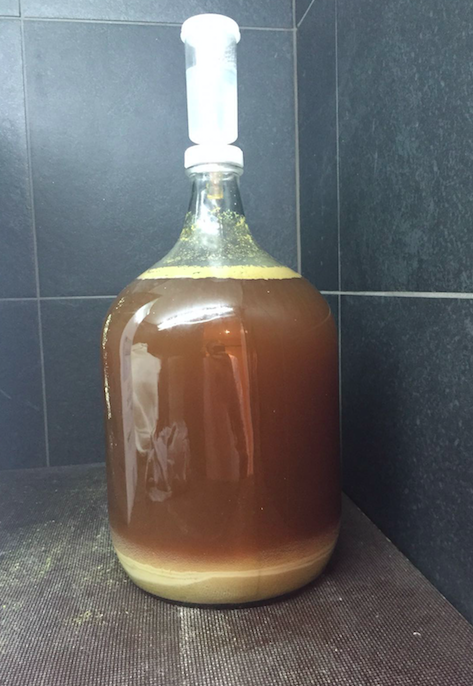 You got it right with the yeast/trub settling out of suspension, also looks like the lighting also looks a bit different in both of those pictures, I tend not to worry about color till its chilled and in my glass. As far as the carbonation maybe you used too much sugar in the first batch. Did you use a calculator or just what the kit told you? Lots of times they tell you to just add the whole amount they send even if its not to style etc.

In the top pick the coarser stuff settled on top is cold break proteins. The beer will look darker as it finishes fermenting, due to less yeast & trub in suspension. Cloudy beer in the glass, in your case, seems to be from haste. An average gravity ale will need about 3 weeks around 70F to carbonate & condition. Then 5-7 days in the fridge to get longer lasting carbonation, settle out any chill haze & compact the yeast/trub on the bottom of the bottle for a clearer pour. When pouring the beer into the glass, & the grainy trub/yeast gets up to the shoulder of the bottle, stop pouring! Leave the gunk & funk behind. The beer will be clearer & taste better. Off flavors go to the bottom with trub , etc. When you stir it up & pour it into the glass, that's what you'll taste.
OP
S

i added honey as per the kit guidelines - 2 tbsp for 1gallon. Could you show me how to calculate this more accurately?

the pics are taken in the same cupboard, with the same light - but the carboy is not in the same place, so this could be part of it.

I was fermenting at room temperature, would this still explain cold break proteins - or have these come out from when i chilled the wort?

I drank another couple of bottles last night (4 weeks post bottling) and they are still just as hazy.

The plan is to do a few more of these 1 gallon kits to dial in skills before "investing" in a 5 or 10 gallon set up.

Cold break proteins precipitate out under rapid cooling. You either jumped the gun & bottled too early, or you got some stubborn yeast? Could be starch haze, if you'd mashed any grains. Again, are you stirring up the bottles, or pouring everything in the glass, or are the bottles not settling at all?

i added honey as per the kit guidelines - 2 tbsp for 1gallon. Could you show me how to calculate this more accurately?
Click to expand...

Brooklyn Brewshop doesn't give very good brewing instructions with their kits at all. Measuring priming sugar (honey in this case) by volume is just one example. First off honey is expensive, try using table sugar. Secondly honey will vary in levels of sugar from batch to batch, it is very inconsistent. Thirdly, you should be weighing priming sugar, not adding by volume.

Google "priming sugar calculator" to get some websites that will help. I like using Brewers Friend personally;

Or this one from Northern Brewer; http://www.northernbrewer.com/priming-sugar-calculator
B

The metallic aftertaste is classic over carbonation.

The change in color is like mentioned above just the yeast floccing out after they finished their work.

Plus you used the amount of priming sugar (honey) recommended for 1 gallon but didnt actually have 1 gallon of product to bottle after leaving behind all the trub.

I've made about 15 Brooklyn Brew Shop mixes and recipes from scratch that are found in their books. All have been good, some have been outstanding. However, I have not made the IPA, so take this with a grain of salt.

For a gallon of beer, I use just a hair over 1.5 tablespoons of honey or maple syrup, which seems to work quite well.

Try cold-crashing for clearer beer before bottling, then put the beer in the refrigerator for at least a week after carbonation is complete.

The darker colour could be the result of a mash that is too hot and/or a boil that is too rigorous.

i added honey as per the kit guidelines - 2 tbsp for 1gallon. Could you show me how to calculate this more accurately?

the pics are taken in the same cupboard, with the same light - but the carboy is not in the same place, so this could be part of it.

I was fermenting at room temperature, would this still explain cold break proteins - or have these come out from when i chilled the wort?

I drank another couple of bottles last night (4 weeks post bottling) and they are still just as hazy.

The plan is to do a few more of these 1 gallon kits to dial in skills before "investing" in a 5 or 10 gallon set up.
Click to expand...

I mainly keg now, but like everyone else said its best to use a calculator once you know your actual bottling amount. Nothing wrong with sticking to the 1 gallon kits for awhile if thats what you like. *cue pitch line* for me it was worth it to just start out with 5 gallons, or even 3.5 gallons, the time you spend on a 1 gallon equals the same time for much more beer. *end pitch* lol but everyone goes a different route and there isn't anything wrong with that! Good luck
OP
S

Running through a calculator it is telling me to add 0.7oz of sugar to 1gallon of beer.

And that is before taking into account the fact that all the hops i left in the fermenter reduced the volume of beer that i could rack out. Yield was 3.3 litres - 0.87gallon, therefore I should have added 0.6oz of sugar.

I guess I dodged a bullet on this one, as none of the bottles exploded!

Your pitch is a fair one - however, for me, this has been a great low cost, low hassle introduction, that i could have happily dropped without much financial pain. Assuming I do scale up to a larger batch size, then agreed I should have just started there. But as with everything, you don't know until you tried it.

Been doing the research I can, and I am looking at getting a braumeister, either 25l or 50l. I think i would prefer to put the brew through a secondary and to keg it. Also looking at force carbonation and cold breaks -> so many options!

If you browse through the HBT threads, you'll find almost nobody uses secondary except for special additions. I haven't used secondary in many years. It's a good opportunity for oxidation and contamination, with little, if any, benefit.
You must log in or register to reply here.
Share:
Facebook Twitter Reddit Pinterest Tumblr WhatsApp Email Link