Need advice for a tap tower on my bar

All,
I currently have a kegerator with a three tap tower. I am about to build a bar with a granite counter top around my kegerator to hide it. I want to mount the tap tower on the granite. Currently my tap tower is a 2 tap perlick and I drilled the third hole in it for the third tap, not to professional looking. I want to upgrade to something nice, but it looks like my choices are limited without going to glycol. I was wondering if anyone had any suggestions or things I should be concerned about. Like the space between the granite and the top of the kegerator. I was planning and doing some kind of insulation from teh hole in the kegerator to the granite.

here are the choices I found, any thoughts?


is there an option I am missing, I love the cobra taps, but I think I will need glycol, unless something thinks it will work without it.

What is the space between the bottom of the tower and the point that the lines go inside the chest freezer? If you are talking like 4 inches or something, you can probably get away with insulating the hoses that are exposed and not worrying about it. If we are talking more than that, you may have to get a larger tube - like 4" diameter - and run your lines through that and set up some sort of small fan to blow the cold air up there to cool the thing down.

In general, glycol is used for runs of 25 feet or more. Most towers say they come with glycol tubes, but you don't need glycol to actually use the thing.

How many kegs will you have on tap at the same time? Will they be in a fridge under the bar?

Most of us can only control 2 taps with a minifridge. What are you using?

If you're running 3 then go for whatever you think looks best.
OP

i have a sanyo kegerator, like a dorm fridge. It can fit four kegs in it, with one handle cut off and the bottle outside. I leave the bottle in and can have three on tap at the same time. The space between the tower bottom/grantite bottom and the kegerator hole will be 2-3 inchs.

So if i hear you correctly, I could use a three tap glycol cooled tower and just not use the glcyol? I guess I would have a little warm beer in the line, but it would be minimal since the lines would be 5-6 ft at the most, probably 2-4 ft.

Your warm beer in the line would be minimal; If you're concerned I would add some PVC with insulation, a blower fan, or copper lines from fridge into it around your lines. Almost any tower will work just fine for you, just make sure it's properly insulated.

Small computer fan blowing air up to the tower.
OP

cool, should be fairly easy to wire up a CPU fan. Thanks everyone!!!

Two of these, and a small piece of pvc between the fridge and the bottom of the counter. Wrap with insulation and you're good to go.

milldoggy said:
cool, should be fairly easy to wire up a CPU fan. Thanks everyone!!!
Click to expand...

Get an old cell phone charger or other DC adapter and wire that to the fan. Just wire it in parallel with your fridge control and you're good to go, no batteries.

I was just going to say that granite can be tough to work with to get fine holes in, like a circle for the tap penetration. You might want to go with a counter-front type stainless mounting unit that also includes a drip pan, etc. It'll elevate the taps a bit off the bar itself so you won't have that perfectly sleek look, but it'll let you bolt the tower directly to the mounting unit (whereas you can't really bolt anything to granite).

Be sure to put up pics when you're done! Good luck.
OP

I am a little worried about how to mount the tap. but I want to go for a nice seemless look if possible. I talked to the sales person at the local granite shop and she had no idea how I would mount it, but she assured me her installers and fabricators have done this before. I think I might follow the link in the keg sticky and build my tower. Get a nice stainless steel tower and some forward seal perlicks.

Edit: I just looked that link from bad coffee, those look perfect, i owe you a homebrew!!!

what a great idea, I guessing you are saying mount one on the under side of the granite and one on the top and lock them together?
then mount the tower to the top one. or you just talking about the pvc between the fridge and granite.

Could not find much info on mounting to granite, but it looks like machine screws all the way through the counter top is the best options
http://www.micromatic.com/forum/us-en/trouble-shooting-beer-quality-home/761-beer-tower-mounting.html
C

Milldoggy,
If you are looking to sell your used tower send me a pm, I've been looking everywhere for a decent priced one.
OP

Update - If anyone still cares

I had some custom cabinets installed. the Middle cabinet is a false cabinet that holds the kegerator. I just had the granite installed last friday. They drilled a 2" hole for the lines at the store. When they arrived, they drilled four mounting holes all the way through with their mounting drill, took them a whil and the burnt a bit. Ordering the rest of the parts to mount the tower. I wil post pics when I am all done, but here is the cabinets. I ended up gettig the tower from acu. 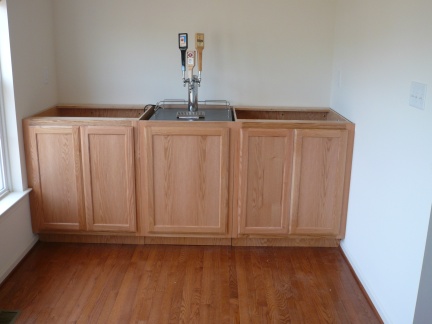 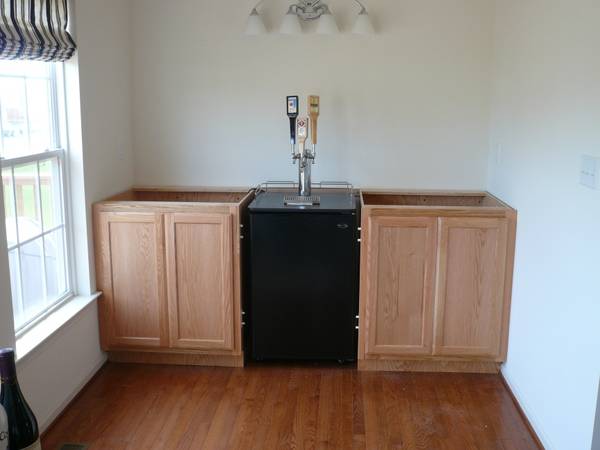 Bar is done. Granite came in, man was that a pain. took 4 people from the store and me to get it upstairs, we have a turn on the steps. I think it weight around 400-500lbs. They drilled a 2" hole for the tower at the store. After we mounted the granite, I placed my tower on the granite, marked the holes and the guys spend 45 minuntes drilling 4 holes all the way through. They went through two bits because they were not running water on the granite as they drill, they just dipped the bit in water every once in a while. Tipped them 80 bucks, they did a great job.

I took a 7/16" piece of plywood, cut a center hole out of this, drilled the bolt holes, then chiseled out holes for the nuts. this way I could counter sink the nuts, cut the bolts and make it easy to slide the kegerator under it. I used 3" number 8 bolts. I got a 3 in" flange from the plumbing section of lowes, took the top off the kegerator and mounted the flange on the tin. I then used fiberglass insulation, wraped it in plastic and coated it was electrical tape(for some reason I did not like the idea of fiberglass being neer my beer). I slide that in flange and made sure it was tall enough to make a nice seal with the plywood under my bar. Pushed the kegerator in and ran the lines. Got to rerun the lines, the ones I got from morebeer taste like plastic, they are send me new line.

The only issue I have is heat. I did not even think about that. with the false door off, it is fine, but when it is one, man, the granite is really hot to the touch. I am going to mount two laptop cooler fans, found one from stantech that has 4x60mm fans, they are made to pull air down from the laptop and push it straight out the back. They are only like 1 inch tall. So I am going to glue some magents to the granite and the cooler, mount them under the granite. I am going to cut 1 inch off the top of the false door and put some nice metal speaker grating. That way they can pull the hot air off the compressor and push it out the front. I think I will need to drill some vent holes in the bottom to. probably going to hook a thermostat up so they do not run all the time, found some nice plug in ones for 50 bucks.

I can share more photos if anyone is trying to do the same thing, just pm me. 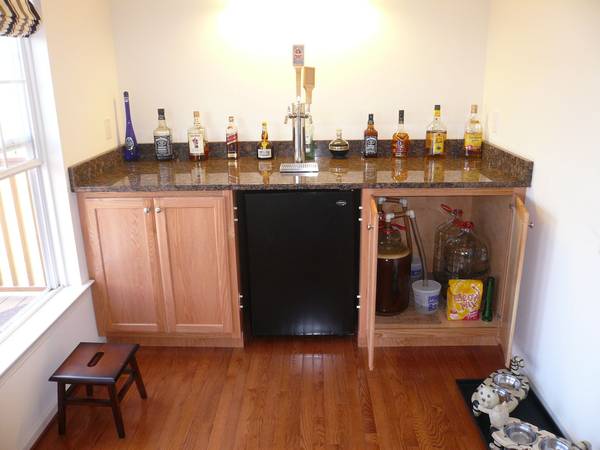 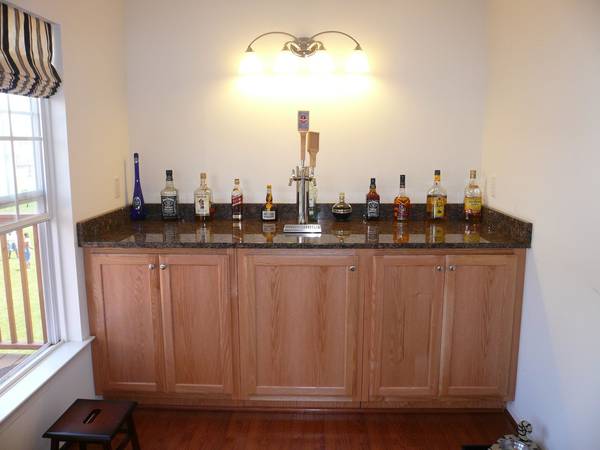 That looks great! You need a bit more liquor though I'd say.
OP

the rest of the liquor is hidden on the other side, the SWMBO would not let me put it all out.

That is sexy!
OP

the lines are not bad, only about 6" to 1ft is out of the fridge. Not much warm beer at all. I was thinking about running a copper line around them and extending it into the fridge , but it is not worth it.

Would have been nice if the tap were closer to that window--looks like a deck out there. then you could lean in and get a cold draw without having to come inside...
C

Kass_Brauhaus said:
Would have been nice if the tap were closer to that window--looks like a deck out there. then you could lean in and get a cold draw without having to come inside...
Click to expand...

I think his next project is replace that window with a nice french door. Or even a sliding door. Heck, just pad the window sill so you don't hurt yourself climbing in/out.

looks awesome i want to lick it!!

If money were no option, that;s the one i;d get for sure! Since money is an option, I would realistically go for the sub $300 tower.

Just curious, what'll you do if you sell the house? I'm sure that'll be a great selling point if you were to decide to leave it with the house. I don't think I could do that though!
OP

I will have to leave it, the granite has a 2 in hole in it, guess you could run tv cables through it.

not sure, i am sure I will drink to drown my sorrows

I'm sure it wouldn't be that hard to rig a tv up there. You'd possibly have to move the light fixture- I'd be tempted to throw a big mirror up there that runs the length of the bar
B

A set of taps built into a fully insulated boxed in space between the wall studs fully insulated door included with two ducts for cold air in and out back to the kezzer for a outside brew tap station.
OP

Finally done. Here are photos of the cooling system I used to cool it(bc1206 sanyo). I used 8 fans from 2 santech notebook coolers, 4 in the back, 4 in the front. I cut the false cabinet with a large gap on the bottom and a 1 in gap on the top to create a current. This has solved my heating issue. 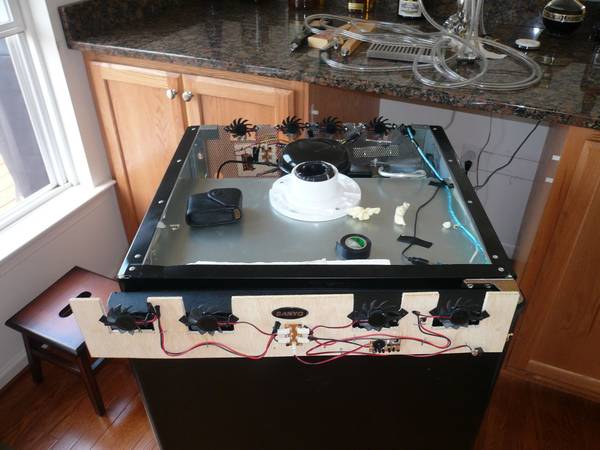 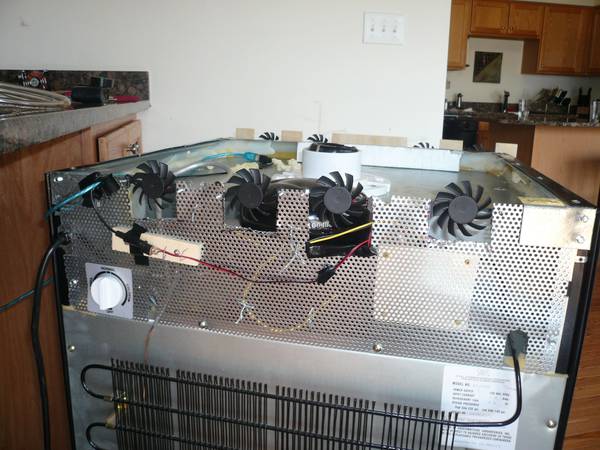 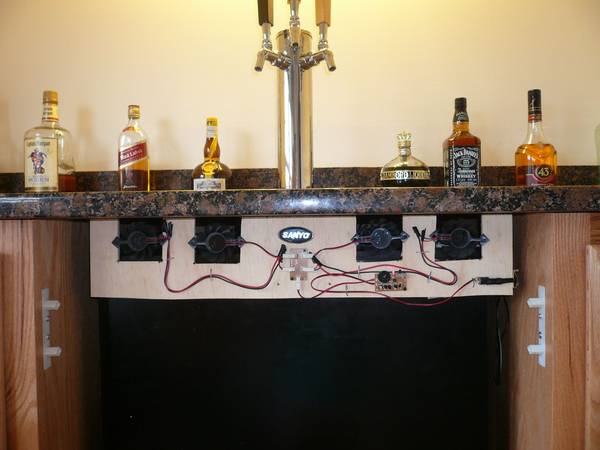 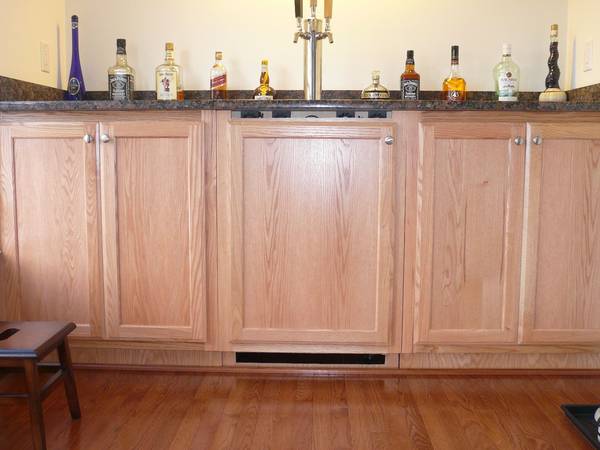 If money were no option, that;s the one i;d get for sure! Since money is an option, I would realistically go for the sub $300 tower.
Click to expand...

If money were no option...I would love to get a ceramic 3 head tower! If there are any firemenwomen out there, a shiny red one shaped like a hydrand would be pretty cool.

Advice on a tower for my first kegorator