My first Mr. Beer, but far from my first brew

I got a Mr. Beer as a holiday present from a friend that didn't know better, considering they know I'm already brewing why did they think I needed a beginner's kit? Anyway, I used it last week for the first time, not to brew beer, but to make a large lager starter. It was perfect for that, it has a trough to catch the propogated yeast and a spigot to let the wort off, leaving mostly yeast. But it got me thinking that I should try it.

Today I gave it a try and I'll have to say it isn't a bad little system. For one thing, I was able to do the entire process in about 45 minutes, including cleanup. It did help that I had everything already clean and a batch of sanitizer ready, but I usually do that in advance anyway. I used the kit ingredients that it came with, which appear inadequate for a good batch, especially the corn sugar/booster. I only added about 10oz of LME that comes from the food coop, sold as Eden Barley Malt. The OG was 1.048, not bad. I'll see how it comes out.

I figure that even if I never buy another Mr Beer kit, I could still use it for making small batches. I don't need 5 gallons of every beer that I make.

And that lager that I started with it is bubbling along nicely, if a little cold at 46 to 48F. I guess better too cold than too warm as long as the yeast are doing their work.

The Mr. Beer is a good little kit. I just had my first experience with one at x-mas time. It's a little primitive(no airlock or hydrometer included), but makes a good little half-batch. I plan on using mine for small experimental batch's.

Yeah I got a Mr. Beer Fermentor for Christmas as well.
It was my first kit and really got me into brewing.
I have since upgraded but I use the Mr. Beer to make small batches of stout that are really high gravity

I am drinking my first ever brew that I made with my MB (got it for Xmas as well). It is the west coast pale ale. I subbed 1 lb of light DME for the booster pack and pitched a pack of Nottingham yeast. It is a tasty beer. Not the best beer ever, but for my first batch it rocks. I am testing a Irish red tomorrow that I brewed with a 5 gallon starter kit. I ran out and bought that kit as soon as I saw the MB fermenting. Yes I am hooked. I just bottled an experimental 2.5 batch last week that I brewed in the MB. It is a decent little system.
G

I use my Mr Beer for apfelwein. Its perfect if you dont want to carbonate it, just drink it straight from the tap after a couple of weeks.
H

Making a starter is a good idea for Mr. B. I use mine for apfelwein or whatever ghetto hooch I have going at any given time. AW I use carb-tabs and fill right off the tap. I did a few 2g AG batches in teh good ol Mr. Beer but honestly, anything less than 3 gallons is a total waste of time! My wife hates Mr. Beer... it spawned a hobby that is out of control.

My SWMBO made the same mistake.Bought me a mister beer a while back.She didn't think it would cost her 2 closets and the use of the kitchen on saturdays

It's a handy little small test batch fermenter...I use it to do 2-2.5 gallon stovetop all grain recipes...often using an unmodified 2 gallon cooler for a mash tun. You can even lager the brown keg in a standard fridge without it taking too much space...

on occasion it shares space with my bigger fermenters. 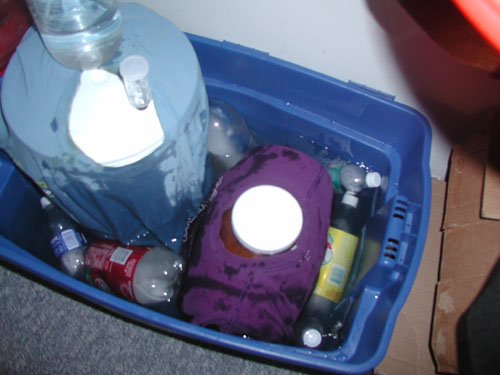 Some of us have put a lot of effort into the mr beer thread...I posted the all grain tutorial in there...

Thanks for the tips. I actually have two surplus Mr. Beer, because I was saying something about how great a second one would be and she saw it on clearance for $15 with kit included. Maybe I will try the old AW, but wondering if AW can safely sit in a mr beer for 4 weeks?

Lots of people use the Mr Beer fermenters for Apfelwein, myself included. Works just fine.
Y

The basic shape of the Mr. B fermenter is one of the best available. Trub winds up in the right place and the keg will fit in a cheapo ice chest for temp control (got one for 13 bucks locally). I wish something like it were available for 2.5 gallon batches with a decent spigot and in a PET plastic.

I'm less stoked about their ingredients. Just too much $$ for what you get.
OP
Z

I took a hydrometer sample today from Mr. Beer, and it was still too high, around 1.018. It should go down to 1.012 or so. I'll give it another few days. It tasted rather light, not like my other homebrew, but I used the booster, which doesn't give it any flavor, and may actually take flavor away.

With a little ingenuity, a new spigot could be placed on there, and a 2.5 gallon batch will fit if your careful with it.

StoutFan said:
With a little ingenuity, a new spigot could be placed on there, and a 2.5 gallon batch will fit if your careful with it.
Click to expand...

My first Brew outside of Mr. Beer

First Beer From My First Brew

X
My thoughts/review on my first brew with Mr. Beer kit

J
My first batch is in the Mr. Beer!