So, I started kegging this year and it has probably been the best upgrade I've made since going AG. I started out by taking half of the fridge in the garage and squeezing a 5# CO2 tank and 2 kegs with Picnic taps into it. This proved to be be handy, but sorta messy. The picnic taps would occasionally leak or drip and the fridge started looking really bad. Also, I could only have 2 beers on tap at a time and if I wanted to try a new brew, I had to drink up 5 gallons of something to make room.

So, I decided I needed a better solution. At first I thought of going with the standard chest freezer solution. Only problem with this was for me to have the number of taps I would want and lagering space, I would need to get a beast of a chest freezer and that would eat up too much floor space. So after seeing a thread on here about a stand-up freezerless fridge that could hold 10 cornies, the gears in my head started turning. I started searching craigslist for a volunteer for my project.

As luck would have it, just before Christmas, I found a 20 cubic foot commercial stand-up freezer for sale just a couple of miles from my house. It was 2 years old and the seller was asking less than half of what a new one would cost. I already had a digital temp controller, so a freezer was fine. I picked it up and started the project.

Here is the volunteer. 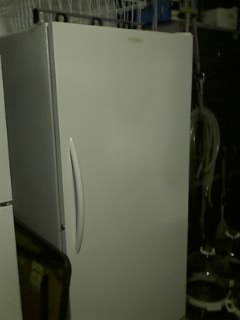 I promptly pulled all of the shelves out and went to building a sturdy shelf that would hold 5 cornies on the top and I could squeeze 5 in the bottom. I bought a set of secondary regulators and pieces from McMaster and built up a six regulator bank to pressurize each serving keg plus a line to carbonate a keg on the bottom. 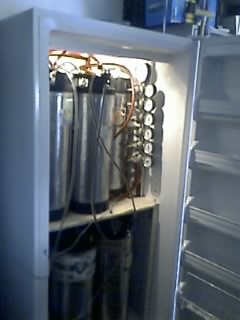 Finally, I ordered Ventmatic forward sealing faucets and shanks which arrived today. I got busy this afternoon and finished her off. 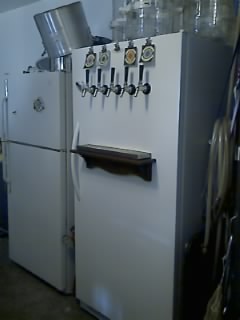 I mounted up a shelf that I purchased at Michaels and stained it. I took advantage of Austin Homebrews special on 19 inch drip trays and the package was complete. I also mounted the faucets rather high up, so if I decide to add another couple of taps I can mount them near the bottom or stagger them at the top. I figure it will also make it harder to accidently bump into one and open it if it is high up.

Anyway, I'm happy as a clam now that I can have 5 different refreshing beverages on tap just a few feet away out in the garage right in the middle of my brewery.

I like the double decker approach. Plenty of conditioning space.

If you dont do 10-gallon batchesyoud better start.
OP
OP

Oh yeah. I've been doing 10 gallon batches for years and years. Bottling was always the biggest hassle. This makes life so much better. I think I'll be upping my brewing just to keep a nice variety around.

Crimony, that is awesome. 10 kegs! But if I tried to sell that to my wife she would be completely convinced that I have finally lost it.

Actually, when I explained that the other garage fridge wouldn't have any more kegs in it and that it wouldn't make as much of a mess, she was on board with it. I try to talk to her about the "cost savings" of buying in bulk and brewing my own. Luckily she hasn't looked over some of the receipts or done a cost comparison to say buying Budlight.

That's so great! I'm drooling here. Thanks for sharing the pictures!

I am heading for the garage with my tape measure, I have a upright fridge only but I am thinking it will only hold 6 cornys.
OP
OP

I went looking at a bunch of them. I would take two cornies with me. I would show up and stack them on top of each other to see if they would work. You need a good 64 inches in height for the overall fridge if not more. Patience and perseverance pay off.

jdoiv said:
I went looking at a bunch of them. I would take two cornies with me. I would show up and stack them on top of each other to see if they would work. You need a good 64 inches in height for the overall fridge if not more. Patience and perseverance pay off.
Click to expand...

That is the same exact fridge I found brand new at lowes on manager special for $250! Sure you can squeeze twelve in there with an external CO2? Also, none of the condensor lines run on the back side of the fridge, in case you have to drill.

I am using mine as a fermenter right now. Works great.

Well thanks for confirming what I was thinking of doing with mine. Looks awesome!

Edit: The shelves in the door are a complete waste, the little crossbar is so flexible. I was thinking if you pulled that inner panel off the door and made it flat you can extend the top and middle shelves about 6 inches or. so Maybe enough room for a few more kegs.
OP
OP

If you remove the door panel and put a flat piece of plywood in it's place you may be able to put 12 cornies in it. The bottom half is about an inch less in depth than the top half. It can only hold 5 staggered in the bottom without bumping into the door. I could squeeze six in the top, but then would have had to find somewhere to put the regulator bank. I have the CO2 on the outside and drilled out the drain hole and ran the hose up through it.

I'm already starting to think of putting a couple of three more taps staggered in on the top. But maybe I'll just see how this does for a while. I really liked going out and taking a sample of a different beer every little while last night.

That's one sweet setup. I'm stuck with only 2 taps atm, but that probably won't last much longer. Especially not after seeing this!

HarvInSTL has a similar setup and the model# of that fridge.

I'm not sure where his build thread is.