I wanted to try and brew the recipe below but I'm really confused by the mash schedule. I think what it says is to mash for an hour at 148 degrees and then mash out at 202 (seems high), leave for 15 minutes then drain. Recirculate ?? times until clear then final sparge with 172 degree water. Maybe this is the right process for a big beer? Can any one confirm? Thanks.

2. Mash-in slowly, adding all grains to the mash tun while stirring to prevent clumping. The mash temperature should equalize to 149°F.

4. Mash out by adding 12 1/2 quarts of 202°F tap water to mash tun while stirring after allowing the mash to rest for 60 minutes. Temperature should equalize to approximately 168°F.

5. Leave at mash out temperature for 15 minutes. In a separate container, heat 2 quarts tap water to 172°F.

6. Slowly drain off wort and add back to mash tun, recirculating until the wort runs clear and free of grain particles.

8. After all mash runnings are collected, add sugars and record preboil gravity. Bring wort to boil.

9. Allow wort to boil 60 minutes, adding Whirlfloc and yeast nutrients as noted above. (If your brewing system doesn’t produce a vigorous boil, consider extending the boil to 75 or 90 minutes and adding the hops at 60 minutes.)

10. Chill wort and transfer to a sanitized carboy or bucket with an airlock. Aerate by shaking or oxygenate with an oxygenation stone. 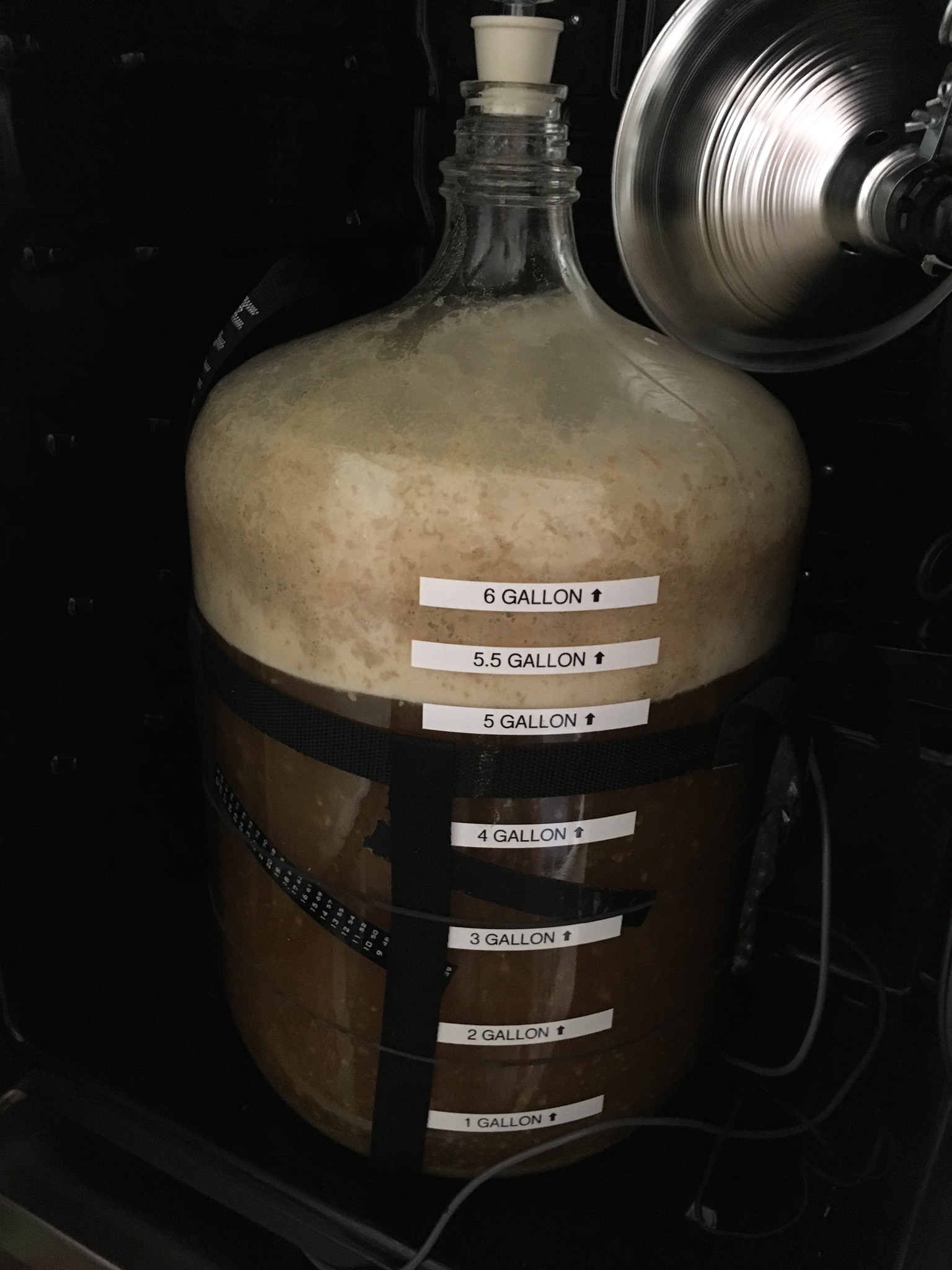 You are mashing for an hour at 149

You then add 202 degrees water to the mash which should raise the mash temperature from 149 to 168.

This is an infusion mash. If you try it just make sure you can maintain 149 in you mashtun. If the temperature drops then the infusion may not bring the mash up to 168. You can always apply some heat. Also, you can add some ice to cool the mash down.

How do you typically sparge your beers.

Also, if you are going to use 3787 make sure you are ready for a HUGE krausen and have a large diameter blowoff installed.

The picture is a Belgian Golden Strong right before I installed the blowoff. The blowoff clogged and I had to just cover it with foil.
OP
R

Thanks. I've only done single infusion mashes. I add grain to 168 deg water and hold at mash temp for a hour. Then sparge with 170 water and drain to kettle for the boil. I did a quad not long ago and found out the hard way about not having a blow off tube.

This isn't the process for a big beer, just pretty standard directions for an all-grain single infusion mash with a mashout step. Don't worry about the number of times you recirculate (vorlauf), just shoot for the runnings to be clear before collecting.

As NTexBrewer said, you're not mashing out at 202°F, you're adding 202°F water to hit ~170°F mashout rest. I believe NTexBrewer was asking what type of sparge method you employ - fly or batch. It sounds like you're doing fly. If this is the case, it's important to do that mashout step then subsequently maintain your sparge at 170°F since the sparge (should) take a while and you need to denature the enzymes at post-mash.

Plugging the numbers in from this recipe shows a strike ratio of 1.3 qt/lb, which is fairly common. I find the sparge volume of 2 qt, though, pretty insufficient (regardless of sparge method), but you're handcuffed to hit your target boil volume if using a mashout of 12.5 qts. If it were me, I would do a couple things to bring your allowable sparge volume up:

1) If you're batch sparging, don't use a mashout step. Use all the water you would have used for your mashout for the sparge.

2) If you're fly sparging, use boiling water for the mashout step. this should allow you to use less mashout water. How much less, i can't say right now as i didn't plug the numbers into a proper calculator to adjust for the temp change, but i would imagine it'd be on the order of a quart or two.

3) Lower the strike ratio from 1.3 qt/lb to 1.1-1.2 qt/lb. For example, if you strike with ~17 qts instead of 19.5 qts, you can sparge with 4.5 qts instead of only 2 qts. To me, it's more important to sparge with more water than to strike with more water.
Last edited: Mar 12, 2018
You must log in or register to reply here.
Share:
Facebook Twitter Reddit Pinterest Tumblr WhatsApp Email Link