Malt Experiment for a Black IPA — Blackprinz vs Midnight Wheat

Being a fan of hoppy beers, I’ve tasted a lot of different expressions of IPA, IIPA, Session IPA, and in it sboom, the specialty IPA’s like White IPA, Red IPA, Rye IPA and, one of my favorites of that list, Black IPA
or Cascadian Dark Ale.
This style, according to the BJCP Guidelines, was popularized in the early-mid 2000s. It was a style that boomed (like now the NEIPA) and every brewery was creating some batches of those and selling them like hot bread. Suddenly, the style started to go down in the national numbers, until it was just turned into a seasonal beer with a very well planned volume, so it wouldn’t go to waste.
In Mexico City, you cannot find a very good example of the style, because the style never was popularized like in the USA. If you could find a bottle coming from there, it wasn’t fresh because of all importation logistics and the hops were a little subdued. Being a style that wasn’t available, I tried to brew one just for me with a lot of hoppiness in there, resulting in a very enjoyable brew. I’m not such a fan of stouts, porters or very roasty beers. Nevertheless, Black IPA was delicious because the toastiness was restrained and it was just a faint touch of it, with a smooth, not astringent, nor bitter finish (this is part of the BJCP Guidelines).
I recently found that a supplier brought some Briess Specialty Malts and in hiding in between different bags, there were some Blackprinz (a hulless black malt) and Midnight Wheat (black wheat). I was wondering about the main difference between them, aside from one being wheat and other barley, and ended visiting the Briess website and made some research. Both malts have a quite similar description of lending a smooth, not dry, not bitter, not astringent flavor; and both are recommended for Black IPA. It was after reading the specifications that I decided it was time to test both malts in this nice and rarely
found beer style. When tasting them blindly, I couldn’t find a strong difference. Just after knowing each one and really paying attention to every detail in the aftertaste I could find a little more flavor in the Blackprinz pint.
It was definitely an IPA with an accentuated bitterness, but with an interesting back note of what I could say is roasted cacao. It really gives extra depth and complexity to the beer without being overpowering and cloying. I think Blackprinz and Midnight wheat can be substituted but IMHO, to accomplish a similar flavor profile (like that note of dark chocolate), Midnight wheat should be added in more quantities.
Midnight wheat is definitely a great choice to add color without almost any flavor, in that case, someone searching for just a black coloring while keeping the same flavor as a pale IPA can find a good ally in that malt. In the other hand, Blackprinz is also a good option to fix color but expect just a little more flavor.

Want to Read More About Experimenting? Check Out This Article » 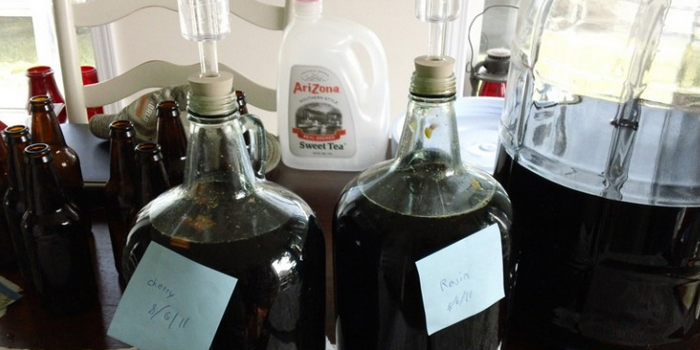 Kits are a staple of the homebrewing scene. Put together by your local homebrew shop or the big online retailers, they are all-in-one boxes that give you everything you need to create beers that are time-tested and brewer-approved. Sometimes they are clones of popular craft brews, other times they are retailer exclusives that recreate classic styles, but either way they take the guesswork out of making a great beer. For both newbie homebrewers and veterans alike, that can be a very welcome thing indeed. But sometimes you want to throw a little twist into an old favorite. Sometimes you want to get creative but don’t know where to start. Sometimes you have a beer idea in mind, but don’t want to spend ages tinkering with a base recipe before you start introducing more unusual elements. That’s when you start kitbashing...

I would like to add a remark: after 2 and 3 weeks after the tasting of the first bottles, me and a friend started doing random samples of them, trying to find a bigger difference between them. It has been more and more simple to do it because of 1 big characteristic: the one made with Midnight Wheat has taken a more acrid, torrified profile than the one with Blackprinz. The flavor has been bolder and without a question, my friend and I prefer the one with Blackprinz because it has a more mellow chocolate taste than the more "ashy" one from the Midnight Wheat. I believe they are still substitutes, but Midnight has more torrified punch and should be used with care, maybe in fewer quantities than Blackprinz. Cheers!
I just brewed my first Black IPA. I did a Black Oatmeal IPA though and used some flaked oats and Blackprinz. It's in secondary right now with a bunch of Mosaic, but I'd have to agree that the Blackprinz gives more complexity right now. I'm super excited for the finished product!!
I prefer dehusked caraffa III. I like my black IPA to taste as little like a stout as possible.
Thanks for your experiment, always wondered about those 2 ?
Have used Blackprinz in Stouts , but was curious about the wheat.
You must log in or register to reply here.
Share:
Facebook Twitter Reddit Pinterest Tumblr WhatsApp Email Link