One of the most important things you can do to brew great beer is ensure you have a healthy, unstressed yeast population. From pitching rates, fermentation temperature, avoiding contamination by competitive organisms, all the way through bottle conditioning; an unhappy yeast culture will kill a batch faster than you can drop a 5 gallon glass carboy on a concrete patio. 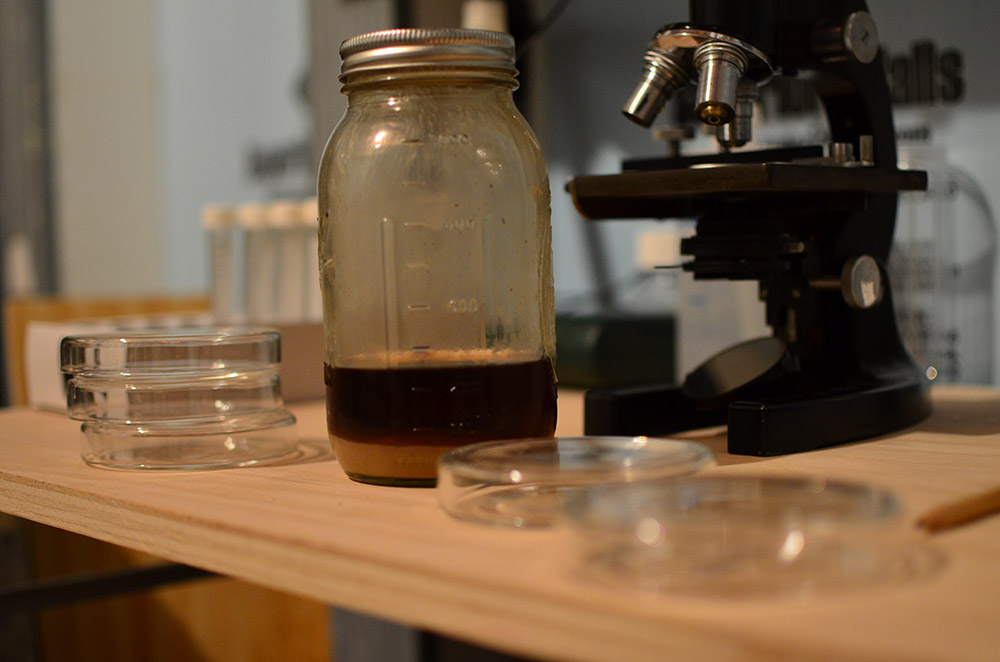 As long as your clean, you can do prepare your yeast for storage outside of a lab.
The best way to ensure you have the happiest yeast possible is to completely control the cold-chain of your yeast supply. By that I mean yeast ranching, and doing it the right way to ensure you have a real, pitchable amount on brew day. Add in the ability to archive rare strains, as well as save you a few bucks per batch, and you’re now wondering “why haven’t I done this sooner?” You don’t have to own a certified lab to do this either (ie, my “laboratory”, an unfinished plywood tabletop in a storage room). All you need is a little patience and a penchant for cleanliness and detail.

Table 1: Overview comparing 3 different yeast banking techniques
The table outlines some of the various advantages and disadvantages of each type of storage outlined in this article. Generally, there are 2 ways to keep a yeast bank: at 4°C or at -20°C. Refrigerator temperatures are good for short term storage, but true banking will require a freezer stock to essentially halt biological activity. Since yeast cell walls will rupture due to the formation of ice crystals at freezer temperatures, you’ll need to add a cryo-protectant to reduce the crystal formation. We’ll go into that later. First, the easy way. 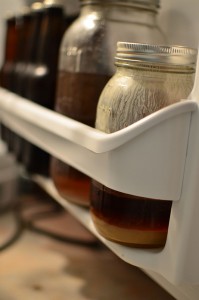 Keeping yeast under beer is effective if you have a fast turnaround
Let’s say you brew a beer using a sachet or liquid pack of yeast from the homebrew store. At the end of primary fermentation, you’re left with a boat load of cells (usually around 2 trillion in a 5 gallon batch) in a cake after racking. Using this trub is the easiest way to keep a fresh stock of a favorite yeast strain. Fresh is the key word here. Yeast will continue to metabolize and be otherwise fairly biologically active in any environment above -20°C, so the term “fresh” is time dependent. A good rule of thumb is to store yeast in the fridge under beer no longer than 2 months before taking a portion of it and making a new starter to restart the clock.
Method
Take the cake, swirl it around in the bucket or carboy in the little beer left at the bottom to re-suspend, and pour into mason jars sanitized with your favorite solution. Keep the caps loosened for a few days and store them in the refrigerator. If used within a couple of weeks, 50ml of this compacted slurry at the bottom of the jar is good enough to inoculate a new 5 gallon batch. Viability will be reduced, and sluggishness will increase with time, so take that into consideration or use one of many online calculators (MrMalty, BrewersFriend, etc) to estimate the volume to use.
Notes
This is a very quick and dirty method for maintaining a yeast bank. While being quite easy and well suited for brewing many beers back-to-back with the same strain, it will quickly become difficult to maintain many strains or keep mutations to a minimum. That being said, there are also some requirements to keep yeast cultures this way. The batch used to create the initial cake must be very low impact to the yeast. It should be low gravity, reasonably low temperature (no hot and fast ferments), must be free from bacterial and wild yeast contamination, and it must not be a blend of strains that are used in many commercially available cultures. Also, it seems as if there has been a shift in the opinion in “water washing” the yeast prior to storage in a jar. Though logic suggests that a yeast population absent of hop debris and coagulated proteins would be beneficial for storage, the general thinking these days is that more collection steps would only increase the possibility of infection. I agree with this argument, and I suggest just dumping the whole lot into a sanitized jar for collection. K.I.S.S., always a good mantra in brewing. 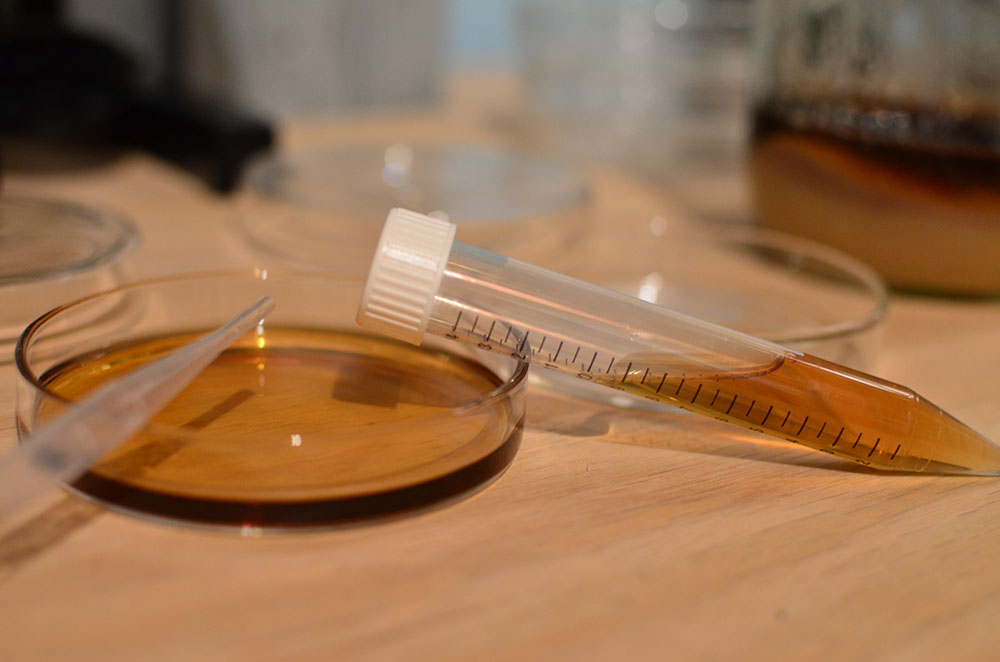 Keeping yeast in slants is more viable, but will require you to build up a healthy starter.
A better way, though fairly more involved, of keep a yeast bank is through agar gel slants and plates. This is the method of choice for microbiologists for keeping viable strains actively growing, so why not for us homebrewers? Once you have this method down, it opens up a whole new powerful set of possibilities. Some examples include culturing wild yeast from your backyard or garden, removing bacterial contamination from a rare strain, and selecting a high growth or high alcohol tolerant strain.
Method
There are as many ways out there to accomplish agar slanting as there are styles of brew, so I will very roughly walk through the general procedure. Google “agar slants” and a multitude of great articles will come up outlining the details. There is a general list of equipment needed for agar slanting: agar powder, pressure cooker, petri dishes or small vials, stainless wire or inoculating loop, and mason jars. Ok, so not a long list, and certainly doable without a large budget. The general steps are fairly straightforward:
Since the culture has not been through a true growth phase in the stress of making a normal beer, you can keep reculturing these plates without too much worry about mutations, as opposed to keeping jars of slurry noted above. The plates can be kept in the fridge for 6 months to a year before having to replate, and replating is as easy as taking the inoculating loop and smearing a sample from the old plate into a new one and repeating the growth/storage process. To grow a starter from the plate, take the sterilized loop and scoop a sample from the slant, twist it around in 2-5 ml of wort. Grow the wort for a couple of days, and incrementally build that volume into your target starter volume, not exceeding a 1:10 dilution (for example, take the 5ml starter, dump it into a 50ml starter and grow, and dump that into a 500ml starter, etc).
Notes
Without describing every single detail along the way, use common sense in preparing the cultures. If you're using glass petri dishes and vials, sterilize them in the pressure cooker. If using plastic, make sure you buy pre-sterilized packs, keep them sealed, and don’t reuse them. Beyond just keeping a master stock of yeast, this method can be used to clean up a contaminated culture by smearing a sample of the batch, and picking and growing individual colonies of yeast from a single cell. The yeast are white, foamy looking, while bacteria are usually shiny. Mold is obvious, and the whole plate should be thrown out if seen, as the hyphae underneath the gel will no doubt pop up somewhere else.

I am a microbiologist by education and trade, and in my opinion, keeping frozen stocks of yeast cultures is the way to go for a homebrewer (and also quite simple to do). While you don’t get that warm, fuzzy feeling of watching a single cell grow into a colony and knowing exactly how pure your culture is, with careful aseptic technique you can keep dozens of strains ready to go for pitching in a couple of days, and it doesn’t take a lot of maintenance or equipment (or valuable refrigerated space). The addition of a cryopreservative (food grade glycerin) is required as mentioned above to keep ice crystals from rupturing the cells, but everything else is pretty much the same as keeping slurry jars. An added benefit of storing cells at such a low temperature is that biological activity slows way down, essentially halting the chance of spontaneous mutations that may occur from fridge temperatures. 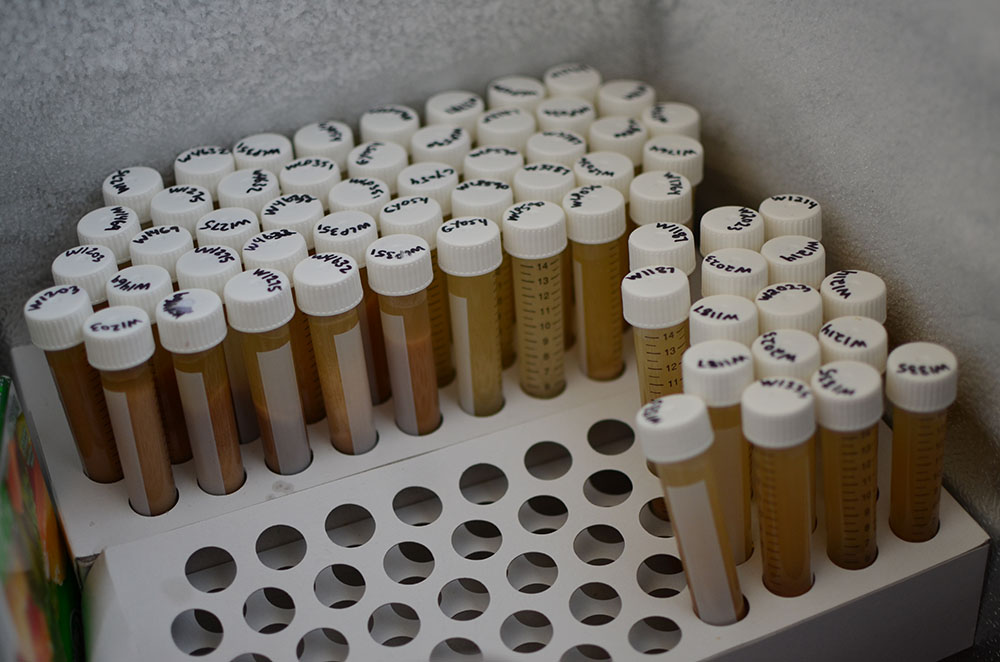 You can store a lot of yeast for a lot of time if you're able to freeze your cultures effectively.
Method
My method for keeping frozen stocks of yeast is focused on creating single-pitch tubes to make fresh starters for 5 gallon batches. You can also make much smaller tubes to steal a small quantity without thawing the stock and step the culture up for a starter. That takes more time, and time is valuable, so I don’t do it, but it is perfectly viable. The equipment needed for frozen banking is simple: pressure cooker, mason jars, sterile tubes, and glycerin (drug store).
Notes
If you increase the final concentration of glycerin in the frozen culture to around 50%, viability will be reduced, but the cells will not freeze solid, and you can dip a sterilized loop in there to inoculate a small starter, very much like inoculating from a slant. This way you can cut down the storage volume of your stocks to a few 1.5ml tubes instead of larger vials. But keep in mind it takes a week or more to grow a starter from that instead of a couple of days.
Regarding the storage time, it is also assumed that a chest freezer or manual defrost freezer is used. If a fridge/freezer is used that has an automatic defrost cycle, the tubes should be placed in a styrofoam box with ice packs inside to maintain temperature while the defrost cycle works.
Keep Records
Whichever method you choose to maintain your yeast bank, keeping detailed records is mandatory. Typical details are yeast ID, strain, source, date commercially manufactured, storage date, number of generations from packaging, parameters of beer obtained from (if slurry), date to re-plate or refreeze, among others. These records will be the living document that tells you how viable the stocks may be, when routine culturing is necessary, and depending on how detailed you get, how changes in your protocol can increase cell viability. These are all good things, and just as necessary as keeping a brewing log book to note how a beer turned out. If you’re a yeast freak like myself and eventually build up a stock of over 40 different strains, you’ll definitely need a spreadsheet with tasting notes, fermentation parameters, and ideal beer styles in order to plan your next brew.

Yeast are incredibly resilient little buggers. Just a few years ago a professor at California Polytechnic State brewed beer with a yeast strain found to be 45 million years old that was stuck in a chunk of amber, inside the digestive tract of a bee. That’s one tough cookie of a cell that’s been through a lot over the millennia. In contrast, the methods given above are aimed at reducing exactly this kind of stress, but are by no means set in stone or an all-inclusive list. Variations in almost every step will likely give great results. Keep in mind the few critical rules: reduce contamination, reduce stress and mutations, and control the growth cycle. No special tools are required to keep a healthy yeast bank long-term; use some common sense, the guidelines above, and you’ll have a yeast population ready for any brew you can throw at them.