I've tried to make Sauerkraut a dozen or so times in the past, and while I've generally made something edible - particularly if fried in bacon fat - it's never been all that good. If I recall, I've basically added non-iodized salt (I think 1.6% of the weight of the cabbage? I don't recall the ratio for sure), sometimes a couple other spices, maybe mashed it up a bit, pressed it into a jar, and added just enough water to submerge it.

Recently, I started making kimchi according to this recipe. I have added a bit more radish than suggested and used Korean chili paste in place of the chili powder (adding all the other ingredients to the paste per the recipe), and it's been really good.

In this recipe, you massage the salt into the chopped cabbage dry, then add water and brine it for 1-2 hours. Then you pour off the water, rinse the cabbage, and squeeze out most of the excess water before adding your kimchi spice paste and fermenting. Does this method (sans the spice paste, and with a different kind of cabbage and cut, of course) sound like it would make a good Kraut?

Also, any thoughts on how to hand cut the cabbage for optimal texture? My attempts at kraut so far have always been too wide and contained a lot of the thick rib material from the cabbage leaves. I don't have a mandolin slicer so I've always cut it by hand, and it's just not the same as the thin slivers I'm used to from both store-bought and handmade German restaurant Kraut. Would I maybe be better off using the coarse side of a cheese grater?

Too quick thoughts, FatDragon. If you have a sharp knife I would use that to cut your cabbage into fine strips. Not a cook but it helps if you use the first joint of your fingers as the guide for your knife so your finger tips are tucked out of the way. The secret though is a very sharp knife - you use the blade and not your muscles to slice the cabbage. If you don't have a sharp knife you can grate the cabbage. The idea is to create as much surface area as possible for the extraction of the cabbage's own water. If you add water then you are diluting the flavors.
The other point is that if you are adding water then either the cabbage you are using is too dry, which is possible - the salt plus the pounding you need to do to help break down the surface cell walls should be enough to extract a large amount of liquid from the cabbage. Alternatively, you may simply be adding too little salt. Not sure that there is a true ratio but if you are using a kilo of cabbage you might use a tablespoon of non-iodized salt.

I cut my cabbage with a knife, and use 2.5-3% salt by weight. I pound the salt in well, in layers, and then make sure the cabbage is submerged at all times under the resulting brine.
I can actually shred cabbage with my chef's nice for cole slaw, so I go a bit thicker for the sauerkraut.

Which cabbage are you using?
A

Yesterday I did my second batch of Sauerkraut (6 lbs) and beets (7 lbs) separately after running low on both. I used 1 tablespoon of sea salt / Kosher salt per lb of vegetables. The Little Big Mouth Bubbler carboy has worked perfectly for me. 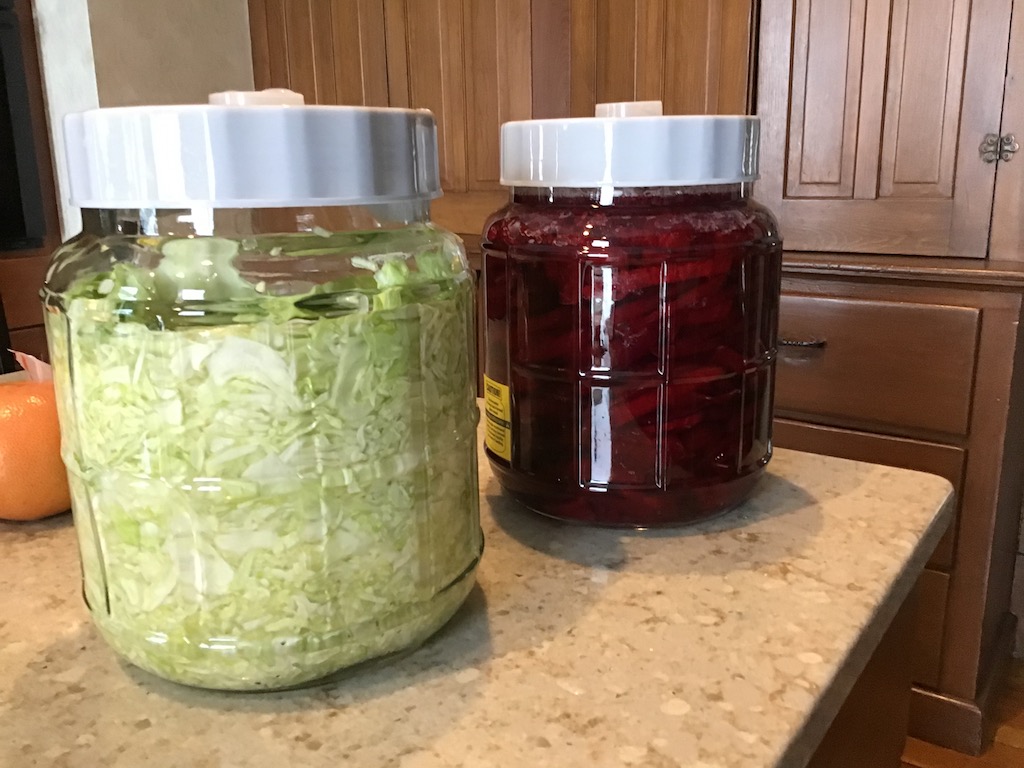 The kimchi soak and rinse method made a great sauerkraut. I'll add some tasty whole spices next time, but it's a solid technique.
A

FatDragon said:
The kimchi soak and rinse method made a great sauerkraut. I'll add some tasty whole spices next time, but it's a solid technique.
Click to expand...

Looking forward to making some Kimchi next and will give that link you provided a try.

AF1HomeBrew said:
Yesterday I did my second batch of Sauerkraut (6 lbs) and beets (7 lbs) separately after running low on both. I used 1 tablespoon of sea salt / Kosher salt per lb of vegetables. The Little Big Mouth Bubbler carboy has worked perfectly for me.

what if anything are you using as a weight?
A

Not using any weights, but glass weights can be used. I also read that you fill a zip lock bag with water and put that on top of the mixture. With the cabbage you save some of the outer leafs (don't shred) and put that in last. One of these days I am going to order some of those glass weights
D