I recently replaced the o-rings on a keg. The keg was originally bought as new, probably 3-4 years old, so still in very good condition. I didn't have an o-ring problem I was trying to solve, I was just changing them as part of a trial. I changed all the seals, but the keg was leaking air once pressurized from underneath the liquid post. I tried tightening (no luck), loosening and then re-tightening (no luck), swapped to another new o-ring with keg lube added (no luck). I grabbed an o-ring from a different batch and leak solved.

The other thing I noticed was in the tightening process of the post. Normally when tightening these posts, you can start to feel some resistance as the o-ring starts to compress before the thread bottoms out and the amount of torque required goes way up. With these new o-rings, there wasn't that feel of o-ring compression, it just was fairly low torque required until the very end when the thread was bottomed out.

I used my calipers and measured the o-ring thickness in several places. This of course is tricky since you're measuring a compliant material. But I took several measurements at different points of the new o-ring, plus other new o-rings from the bag and they were 2.4 - 2.5 mm thick. Measuring the old/removed o-rings, all but one of them measured 2.6 - 2.8 mm thick, and one of them measured the same 2.4 - 2.5 mm. Measuring another o-ring new in the bag from another batch, it measured 2.8 - 3.0 mm thick. So summary:

My internet searches have failed to turn up a standard size, or a tolerance range. So I don't know if this new batch of o-rings are undersized and are a quality problem, or I just happen to have a keg that needs a fatter o-ring.

Has anyone ever found thickness dimension info on the dip tube o-rings?

Are your new o-rings silicone or Buna-N? Silicone is softer, compresses much easier.

On old (repurposed) kegs, original dip tube o-rings usually have a flat top and bottom. A (squarish) profile (cross section), rather than circular.
I don't know what they supply with new kegs, but if circular, they do need to make a positive seal. So you may need to find thicker ones. Have you checked McMasters?

The new o rings I'm trying out are EPDM. They have a circular cross section.

The old ones I removed, you're right have the squarish cross section. I assumed that was a compression set from years of use. Guess not.

And the bag of other new o-rings that measured the thickest, I don't know the material (black and flexible, doesn't feel as stiff as the EPDM), but they were circular cross section. That's what I put in this keg instead of the EPDM ones, and it's now holding pressure.
N

Dip tube rings are 109 size. Here is a link to reasonably priced X cross section rings. No connection to them other than as a customer. 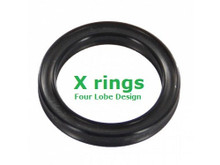 So 3/32" is 2.38 mm, which matches the size of these new o rings. I guess I just happened to have a keg with a slightly larger gap than standard, and was lucky to have o-rings that were 7/64" or something.

micraftbeer said:
So 3/32" is 2.38 mm, which matches the size of these new o rings. I guess I just happened to have a keg with a slightly larger gap than standard, and was lucky to have o-rings that were 7/64" or something.
Click to expand...

Did the 7/64" o-rings end up working out? I just replaced my dip tube gaskets and I didn't see width on the replacements, but they started leaking immediately. I ordered some replacements but made sure to find ones that are 7/64" (2.77mm) wide so I'll see how it goes.
OP
OP

I just tried the 7/64" wide o-rings in my keg and they are still way too small. There was an immediate CO2 leak when I filled the keg. I held them up to my old o-ring and they are noticeably smaller. Guess I'll have to go find the largest dip tube o-rings I can.

These seal really well without a lot of pressure.

I've had luck with this list, a sticky on HBT.
OP
OP

I bought a used keg years ago and it had no leaks. I went to clean the dip tube and it was a nightmare to get the post off. I could never get it to seal again. I figure they must've used an air gun or something to really drive that thing on there until it stopped leaking.