I plan to brew a Kölsch repeating an excellent recipe I've brewed for 4 times, and this time I'm thinking to change mashing regimen from my usual 3-step infusion to single or double decoction.
I went to search for information whether decoction was traditional to the style and which specific decoction schedule was used for Kölsch. Unfortunately, I haven't found anything decisive: both infusion and decoction are mentioned in various texts on the history of the style and neither is stated to be the preferred method.

Eric Warner in his "Classic Beer Styles: Kölsch" gives quite a vague note on the subject: "Earlier versions of Kölsch were almost always exclusively single-infusion mashed, including our hop-bitter lager beer. Today, many brewers use a single decoction mash to brew their Kölsch". I was a bit surprised to read about single infusions in earlier German brewing. How much earlier: 1900s? 1930s? 1980s? No hints on that in the book. And as I see from various recipes most brewers today use not single-decoction but step-infusion mash for their Kölsch beers. Then the author elaborates on why decoction might be detrimental to the style (and he might have some points) but my main question still remains unanswered.

So now I'm confused and I hope there are knowledgeable people here on HBT who can tell if decoction was traditional for brewing Kölsch in Germany - or maybe Kölsch really was an exception from the more common German approach to mashing and had been indeed almost always exclusively single-infusion mashed since the very invention of the style?

You may find this useful 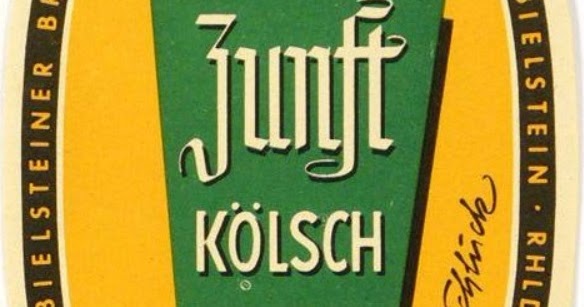 Now here’s something I’m dead excited about. A description of Kölsch from relatively early in the style’s life. Kölsch only seems to hav...

Historic Kolsch is fascinating,from that you can see there were essentially five hop additions, first wort, boil, mid boil, flamout and also a hop tea! Also very well hopped, for my typical batch size of 23l or so, 150g of noble hops in the boil and a further small addition in the hop tea of about 25g. I've brewed a kolsch to this recipe and it is much like a british golden ale, but also different.
OP
OP

Great!
So, it seems from the cited source that Kölsch originally was mashed with a single decoction.
That's exactly what I wanted to know (and what I gonna do when brewing next Thursday following exactly these guidelines).

Ron Pattinson's blog is my go-to source for English recipes, I have brewed maybe a dozen or two of English recipes from there. Never used the blog as a source for Germanic brewing though. Now I see I've missed a lot. Tag search for "Kölsch" returns a trove of information.

Thank you for the suggestion!

More accurately I think, he's touched on Dutch brewing. Koln/Cologne, Dusseldorf, and the rest of the Rhine area getting much of its cultural influence from France/Belgium/Holland rather than Bavaria, etc. He's currently in the midst of a string of blog posts about Dutch brewing at the time of WWII. Lots and lots of Heineken data from a time when they made all sorts of beers!

Protos said:
I I hope there are knowledgeable people here on HBT who can tell if decoction was traditional for brewing Kölsch in Germany -
Click to expand...

Traditional methods may be interesting, however the real question is what method should YOU use? The malts from the "good olde days" and the malts of today are not the same. Today's malts are more consistent and better modified than what they had to work with years ago.
Is performing a decoction mash going to provide a taste profile you are looking for? Or do you just want to try it and see what happens?
Maybe just doing a step mash will work just as good?
Step ,mashing isn't that big of a deal, but pulling out the mash and boiling it for a decoction is a time consuming PITA. Some styles benefit from the process, some don't. The only way to tell for sure is to try different methods and do a side by side comparison of the finished beers and see how you like it.
V

From personal experience a Kölsch benefits from a single, very short (5-10 minutes tops) decoction. Amon other things it will reduce haze without filtration.
OP
OP

Good questions, madscientist451
Well, that was a weighted decision! Lots of reasons to go decoction this time. I didn't post them as I didn't think they'd be interesting enough to everyone. But now I may list them answering your questions:

- I've done the same recipe for 4 times and know very well (and love it!) how it works with stepped mash, so the experience will be quite close to side by side comparison
- I've done decoctions before; with my BIAB setting and smaller-than-standard volume it's rather added fun than hassle
- This time I use a less modified malt: not Weyermann's as always but some rare Latvian Pilsner, which is the first time I ever use it; and less-modified malts are said to benefit from decoction
- The Latvian malt is probably worse than German flavourwise (as it's way cheaper), so I think it'd be wise to employ decoction to add some malty richness, otherwise I risk to get disappointingly bland brew (even Weyermann tastes not particularly rich in this recipe). Sure, I could get similar result just adding a bit of Melano malt, but this time I want to try the new malt with no additions from other brands

So, as you see, the need for decoction has been well thought over
Last edited: Sep 14, 2021
OP
OP

Now I'm brewing a Kölsch following exactly the recipe of 1927 cited in the blog.
This time I decided to go not with a decoction but with the wild 3-hours 5-steps-infusion mashing program and 2-hours boil, detailed in the article. Would be interesting to see what such an immense mashing regimen would do to my exotic malt.

Vale71 said:
From personal experience a Kölsch benefits from a single, very short (5-10 minutes tops) decoction. Amon other things it will reduce haze without filtration.
Click to expand...

what about a single decoction results in less haze without filtration

From what I can see and what I believe to be true, there are two reasons to do a decoration mash.

#1 For the historical reference. To experience some the same way as it was done in days of old. The old "Because it's there. Because you can. Because it's looks fun."

#2 To see if the decoction process induces some new and unique quality to your beer. Maybe it does and maybe you will like what a decoction brings to your glass.

I have never seen or heard of any evidence that a decoction improves efficiency or any other technical improvement when using modern modified malts and using accurate thermometers to use.

As far as I am concerned, I do not homebrew for practical reasons. I can purchase perfectly acceptable beer for less than my investment in equipment, time and ingredients. I brew beer because it is fun, interesting, a challenge and I like to learn the process.

If you are interested in trying a decoction mash, go for it. They are not hard to do and you are unlikely to damage your beer.
G

Protos said:
Now I'm brewing a Kölsch following exactly the recipe of 1927 cited in the blog.
This time I decided to go not with a decoction but with the wild 3-hours 5-steps-infusion mashing program and 2-hours boil, detailed in the article. Would be interesting to see what such an immense mashing regimen would do to my exotic malt.
Click to expand...

Pinging @Protos to see what you think of your Kölsch results using this malt and process? And what yeast did you use? Thx.
OP
OP

Funny, I just had finished drinking a bottle of the Kölsch in question when I saw your question!

Regarding the malt, I changed it at the last moment: instead of Latvian, I used German Pilsner from Ireks (and the Latvian malt went later to Latvian Lagers, like Rīgas Pilzenes, Aldaris Porteris and Senču Alus, the first one is already bottled and carbonated and it came out stellar, so the malt is surprisingly good).
I used mashing regimen from the 1927 article:
30' @37°C
60' @38°C-50°C
60' @50°C-70°C
45' @70°C
and boiled for 2 hours.
I used Lalbrew Köln dry yeast, 1-step starter. I've learned this yeast to be so laggy (up to 60 hours lagtime in my experience) that I always make a starter when I use it. Earlier with this recipe, I used Mangrove Jack's M54. It is thought to be biologically the same strain as Lalbrew Köln, however it's not totally identical flavourwise.

I was quite suprised to like this latest version of the same recipe less than the previous one (which I mashed 90' rising from 48°C to 71°C, boiled for 90' and fermented with M54). Despite more intensive mashing and boiling, the beer came out noticeably blander than the previous one. The culprit, I think, was the change of yeast. From which I make a conclusion, that the yeast choise had far more impact onto the flavour profile of my Kölsch than mashing/boiling regimen.
Next time when I brew my "House Kölsch", I will use the 1927 mash scheme and M54 yeast. Hopefully it will come out better.

Have you tried fermenting with Imperial "Dieter" yeast? I believe it is thought to be the PJ Fruh strain of Kolsch yeast. Supposedly has greater flocculation and will drop very clear without filtration, even though Kolsch is required to be filtered to be called Kolsch in Koln.
OP
OP

Unfortunately, no liquid yeasts available to me.
After 2 months of Lagering, both Lalbrew Köln and M54 flocculate fully, making the beer crystal clear with no need of filtration. Yes, the 1927 recipe does require filtration, along with a month of Lagering.