IrregularPulse said:
I don't see how a difference yeast strain would be "taking chances" though. Just give it a different profile. Bread yeast is just faster starting.
AS far as "being developed", it's honey and water. Don't see how that was "developed specifically" for anything particular yeast......?
Click to expand...

sounds like you are more knowledgeable than joe. please let us know how that works out for you.

Didn't say I know more than anybody and I didn't know Joe was a real person. Only thing I said was that I don't understand how Honey and water is specific to Bread Yeast. If there's an explanation I'd love to hear it.

IrregularPulse said:
Didn't say I know more than anybody and I didn't know Joe was a real person. Only thing I said was that I don't understand how Honey and water is specific to Bread Yeast. If there's an explanation I'd love to hear it.
Click to expand...

i recommend reading the first post of this thread. it's originally from Joe Mattioli, who apparently is not very easy to contact. there is an even longer thread on this recipe over at the winepress forum.

I made a version many months ago. I changed everything but the water, honey and yeast. I added 2 lbs of wild blueberries to it instead and let it do it's thing.

I just threw a batch of this together, only I left out the nutmeg and the cloves. they were just wayy to expensive for a college student like me.
my starting gravity is 1.1

pivot676 said:
I just threw a batch of this together, only I left out the nutmeg and the cloves. they were just wayy to expensive for a college student like me.
my starting gravity is 1.1
Click to expand...

???? You can get both of those at your local grocery for under 5 bucks for both! Dont leave them out man! Youll regret it in the long run!

Naaaa...it wont be crappy man, but look like at the dollar stores and places like that. Id say if you can get those last 2 ingreidients in there in the next week or two youll be cool...that way it goes through the initial ferment. It wont be crap though if you just cant get them in there. I always buy the whole nutmeg and crack about 1 or 2 between 2 spoons and then toss it into the mix. ...then like 2 cloves.....They just really augment the taste and thats is what your shooting for...

Sweet deal, youll be glad ya did in the end!

I made This this evening very simple i had some very slow airlock activity. not much at all but im hoping it picks up over night. ill check it when i get off of work.

Just looking for opinions as ive never made mead or yet alone anything brewing as of yet.

cheesecake said:
Just looking for opinions as ive never made mead or yet alone anything brewing as of yet.

Looks good to me.

Thank you for the fast reply

Just made this today. I've got other meads fermenting, but this one will probably be my first to mature.

hurray for the pipeline!

I've only made one batch (really need to do another) and had one bottle at the 8mnth make. It was the best by far. Need to make 2 more gallons so I can put one back a year.
C

Has anyone ever had a freak circumstance where this has gone dry? I made some up at the end of summer, bottled after about 2 months and at that time it tasted quite sweet and rich, almost to the point of being thick. As I said, I bottled it. About 2-3 weeks later, I opened one of the bottles and to my surprise it had carbonated up and was much dryer tasting. I cracked a couple of the other bottles to make sure they weren't building unhealthy amounts of pressure but they didn't seem to be, so I closed them back up. Has anyone had this happen? I followed the recipe to a t, so I figured the bread yeast wouldn't have a lot more to give. The fizzy result wasn't bad, still better than other wines I've had, but definitely much more similar than the golden goodness that the sweet mead was. Anyone else have that experience?

I started a batch of this about a month ago and smelled the fermenter today. mmm smells like honey and oranges. delicious.

If Im going to bottle this stuff in wine bottles, do I need to filter it?

the best line yet!
6

Made 2 gallons of this 2 months ago. It looks great and is clear but none of the fruit has dropped, can I still bottle it?
Do I need to add anything before I bottle it?
Thanks
F

If it's clear, as in..you can read a newspaper through it, you could either rack it off to a secondary and let it sit and mellow a bit....or you could bottle.

I made a 5 gallon batch of this on 09/19/09 & it's still not clear. It was still bubbling a few weeks ago, seems to be degassing & getting a little clearer now @ the 3 month mark. Seems the bread yeast is giving a good fight.

I didn't take an OG, anybody have a close figure for OG?

I recorded my original gravity at 1.1 but I think that was before I added the oranges so they would raise it up a bit higher.

I have just about everything around the house for this except the raisins.

One gallon wine jug leftover from Tgiving-check.
3 lbs of honey-check
More bread yeast than a single human being could need in a lifetime-check


The closest I have are Craisins, but not sure I want the tart cranberry flavor. I was thinking of dropping a vanilla bean in there...

I think craisins would be a pretty sweet idea. i was thinking about using them when i threw my batch together.I may need to try that next time

The raisins are for the tannins I believe. BUT raisins and craisins would be interesting.

Ok, I had the craisins in my hand and chickened out. For my firstbacth, I didn't want to experiment all that much. I just acquired another gallon fermenter and will be adding the craisins to my second batch. Will let you all know in 2 months.

It is now official. Between Apfelwein and JAOM, my beer is going to be getting jealous. You just can't beat these two recipes for the minimalistic approach to equipment and process, and the near bulletproof nature ot the recipes. Great for first timers and the results are good enough to keep in the rotation.
R

SuperiorBrew said:
I have never ventured to the Mead Forum before but when I did and saw how easy this was I just had to give it a try. Thanks to Joe and Yoop! 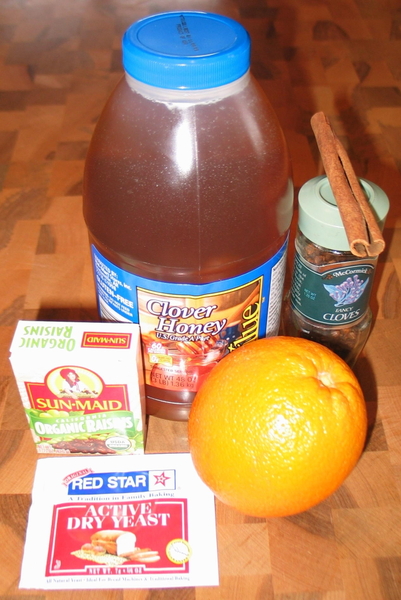 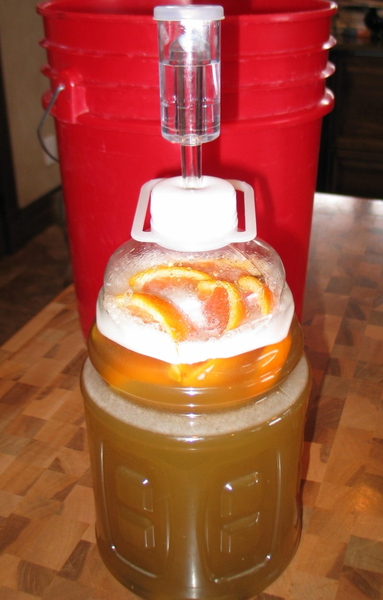 greetings and Happy Holidays everyone, SuperiorBrew, what do you call that container please and where can I get one? the one in the bottom picture where you started the JAO? Thanks!!!!

Do the ingredients all scale at 1:1, for making a 5g batch?
R

mattmcl said:
Do the ingredients all scale at 1:1, for making a 5g batch?
Click to expand...

Yes, except for the yeast. Only add the original amount of yeast.

Mine is sitting around waiting for my cold to go away. I don't feel comfortable bottling with this in me. It was "ready" on Dec, 12th. I assume it is only getting better

I'm gonna give this 1g batch a try after I move this weekend.

RubenAlonzo said:
greetings and Happy Holidays everyone, SuperiorBrew, what do you call that container please and where can I get one? the one in the bottom picture where you started the JAO? Thanks!!!!
Click to expand...

that looks like a one gallon juice jug found at your local grocier, apple/carnbreey/grape/moonshine

Nocturnus said:
I'm gonna give this 1g batch a try after I move this weekend.
Click to expand...

you're wasting your time. 6 months from now, your old lady's gonna whack you up side the head and say, "YOU ONLY MADE ONE GALLON??!!".
F

if you like the JAOM..then give the MAOM recipe a go..you'll be very happy you did.

Ok I made a 1 gallon batch of this, and my starting gravity is 1.1 with the honey. I forgot about the fact that the orange would add to this as well. does anybody know how much a full sized orange would have influenced this gravity?>
D

I made this mead about two or three years ago, it was my first fermentation ever. Turned out pretty good, except a little more orange-y than I was hoping for. This will require AT LEAST 6mo of aging and after a year is damn good. Yes, I used bread yeast, it turned out fine. It also is a beautiful color and is very clear when ready to bottle.