This is my first time making JAOM.
It is really hard to leave it alone !!
But I followed the original recipe.
The only thing I didn't do, was squeeze the orange.
I was listening to Got Mead Podcasts, and that was one thing they said they would do the next time they made it.
Oh well, It will just have to be.

The Blood Orange was a one gallon batch.
3# Clover Honey
5 pounds 3 ounces Blood Orange segments.
Frozen, thawed and pulverized in the food processor.
1 small cinnamon stick, 1 large clove, 1/2 a whole nutmeg, cracked into smaller pieces,
and 3 whole allspice, also cracked.
D47 was the yeast, SNA protocol followed.
The S.G. was 1.090 (22.2 Brix)
Last Tuesday it was down to 1.062.
Yesterday is was down to 1.004.
Just degassing from here on.
Probably give it another week, then rack it off the fruit pulp.

The coffee was cold steeped. This was on the tips from Sergio Melovino
I went 1 pound coffee grounds per gallon of water.
Each coffee bean was just cracked into 8 to 10 pieces, then mixed with room temp water and mixed several times over the next day.
I used three different Starbuck's coffees.
I used about 11 ounces of each of the following coffees ......
Verona, Sumatra and French Roast.
My wife and I really like the dark coffees.
My S.G was 1.090
It has progressively dropped gravity every other day.
1.072, to 1.058, to 1.044, down to 1.034 this morning.
Tomorrow it will be past the 2/3 sugar break, so just degassing from here on out.
The coffee aroma is Fantastic !!
I don't think I will need to add any more beans as it rests for a month or so.

Only things I'm ever willing to fudge on a JAOM is removing the pith from the orange, I find it can get to bitter some times, and swapping an airlock for the balloon. Otherwise, I agree, it's difficult not to play with it but so fun to watch. Never heard of squeezing the orange, must be a juicing suggestion but plenty of orange flavor comes through after two months.

5 gallon Blood Orange has been cleared and aging a while now, just need to get around to back sweeten and bottle.
OP
OP

So I decided to take the jug and put it where I can't see it when I go down stairs.
I will try to remember and check it at the end of the month.

Best thing I've found is after 2 weeks of watching it, I mark the calendar ahead 6 weeks and hide the carboy. Day or two to forget about it then it's a happy surprise

So here are the Blood Orange Mead and the Coffee Mead. 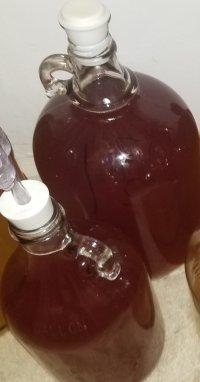 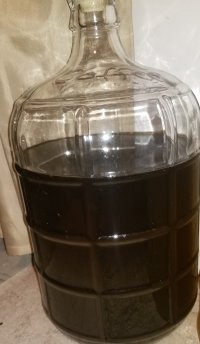 These look like they're coming along very nice.
That coffeemel sounds really tasty! I may have to try another batch soon.
Do you have any smaller vessels to put your coffeemel into? That's a concerning amount of headspace. I would hate to see that oxidize.

So it has been 8 weeks since I made the JOAM.
I had put it away, in my wine cellar.
I saw it last night and noticed that it looked amazingly clear.
So I poured a sample.
All I can say is AMAZING !!!!!!!
I racked it into a clean gallon jug, to get rid of all the fruit.
I will see how it cleared up tonight.
Might have something extra to drink over the Holiday !!!!