Is this a rhizome I can cut and replant? 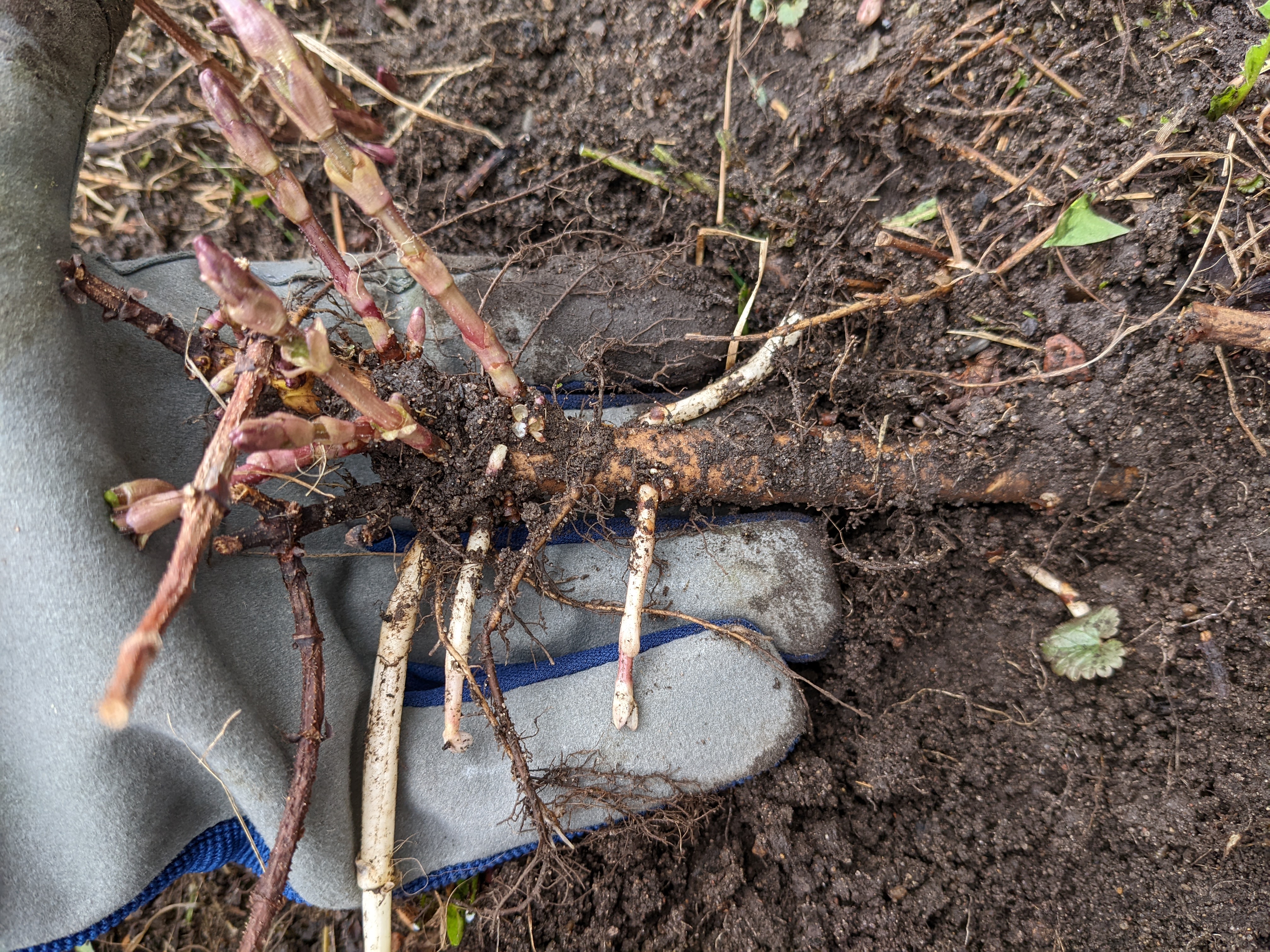 I was getting weeds out from around my hops and found this just coming right out of the ground.

Can I cut and replant it?
N

I've done this with smaller sections of root in potting soil in pots and in the ground and none of the ground ones took off last yr. though this yr i found a plant coming up where one i transplanted had withered so yay for me.
too bad i can't remember what i planted there. lol.

i've had to put them in pots first. the bines will usually whither and die then new ones come up and if it's looking healthy and throwing off some bines i'll transplant it then.

Pretty sure you can, I had a branch brake off last year and it took root so I’d definitely try it.


I was getting weeds out from around my hops and found this just coming right out of the ground.

Can I cut and replant it?
Click to expand... 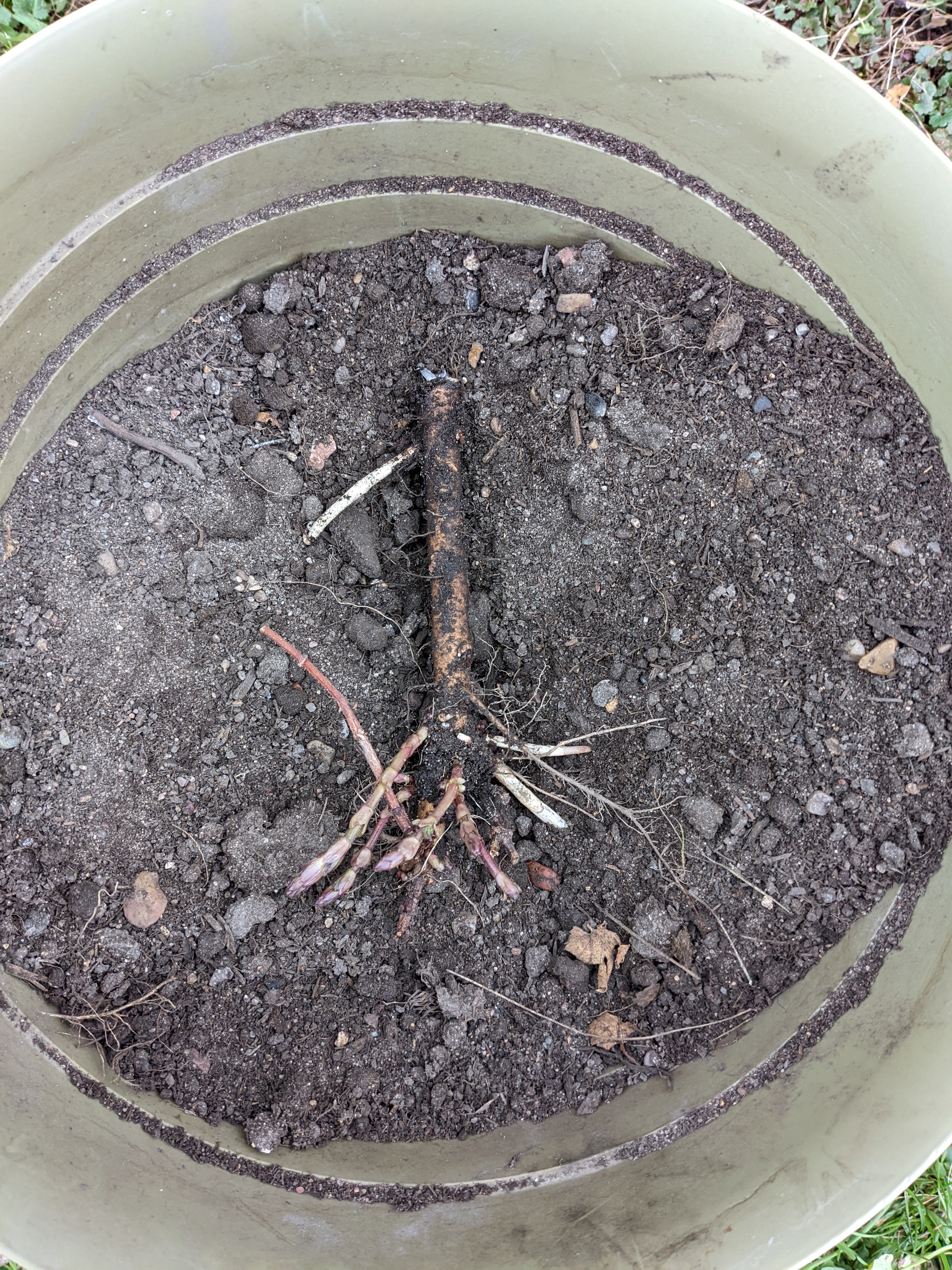 Thanks interneters, I hope this works!

Yeah, that's a rhizome. If you originally planted from a rhizome, by the end of the first season you can consider it to have turned into a crown or rootstock as it now has it's own root system and will have formed some buds to produce your new growth for the next season. Certain varieties can produce rhizomes in their second year but usually by the third season your original planting will have accumulated enough excess carbohydrate reserves to make some rhizome growth of it's own. They're one of nature's ways of ensuring survival if the mother plant (the crown) gets wiped out by some force of nature. The second obvious way would be seeds but you need a male to help that scenario take place. If you started with a rooted cutting, you very well may have some rhizomes form during that first year as the fact that it already has some roots to start with, it doesn't have to spend any energy to form a root system and can use any excess energy to put into making rhizomes.

The below pics are of a male I was late to prune this year and thus you see lots of new growth blasting off already from the terminal buds. One tip about your transplant - if you lay them down horizontal like you have, the buds on the bottom of the rhizome will grow out quite a way under the soil before they break the surface. If you were to have planted it vertically, the buds will grow up in a very tight or compact cluster, almost straight up when they break the surface. The reason I say this is that it will help control the unwanted spread as some varieties will send those new shoots a few feet away from the main crown before they surface (when planted horizontally). And over the course of the growing season, there will be new buds that will form along those underground shoots that will continue this spread year after year if not checked. This is the reason folks say they are invasive, which may be considered true - but if you understand how they grow, you can negate this issue with a seasonal underground pruning beginning on about the 3rd year. Hope this helps.

Yep definitely a rhizome. As long as you have buds and roots you should see it take root and grow a new clone.

With hops you'll find that the plant grows in every direction including up. The spreading root/rhizome system will grow near the surface and sprout new bines. That's how the plant spreads and grows as it assumes it depletes nutrients in its original location and looks for more soil nutrients and light. That's why you usually want to cut back the crown every few years and fertilize annually.

I just got my Saaz hops in the mail and was pondering planting it in a large pot. Maybe I will put it on the north side of the property to grow on a split rail fence. I will also be receiving a mystery hops rhizome soon but lack good places to plant it as there is heavy herbicide spraying in my area. The only other viable place is on the east side of our garage but it is a very, very dry spot, but I was going to transplant a passion fruit vine there... I planned on running some drip irrigation to that spot and maybe trellis it on some T posts with horizontal wires or maybe wire it to the soffit into a truss overhang, I dont know. I dont really have a vertical solution but Im excited about growing the hops!
OP
OP

I don't have fantastic spots to plant hops, either. The south side of my house is open enough, and I do have a couple planted there, but I have a raised bed that I don't want to disturb, and no good support structure. My neighbor has also been talking about putting a fence in, which wouldn't help.

I put a cheap trellis up before I planted my hops, but I have some family who are just curious if hops will grow in a certain part of their yard and I've sent some over there so I don't have to crowd my lawn too badly.

The planter I put this rhizome in is the smallest I've used and only because I was caught unprepared.
K

I’ve had luck in the past taking shoots like that to propagate new plants for friends. I’m trying to start a new Alpharoma plant for a friend this year.

Here are a couple pics that show how mature hops can try and take over a particular spot. This was a couple weeks ago during my annual spring rhizome pruning. These are both 4th year plants. And bear in mind, I pulled the soil back like this and cut off rhizomes last year as well. Every year they pop up in new places. These things are beasts. 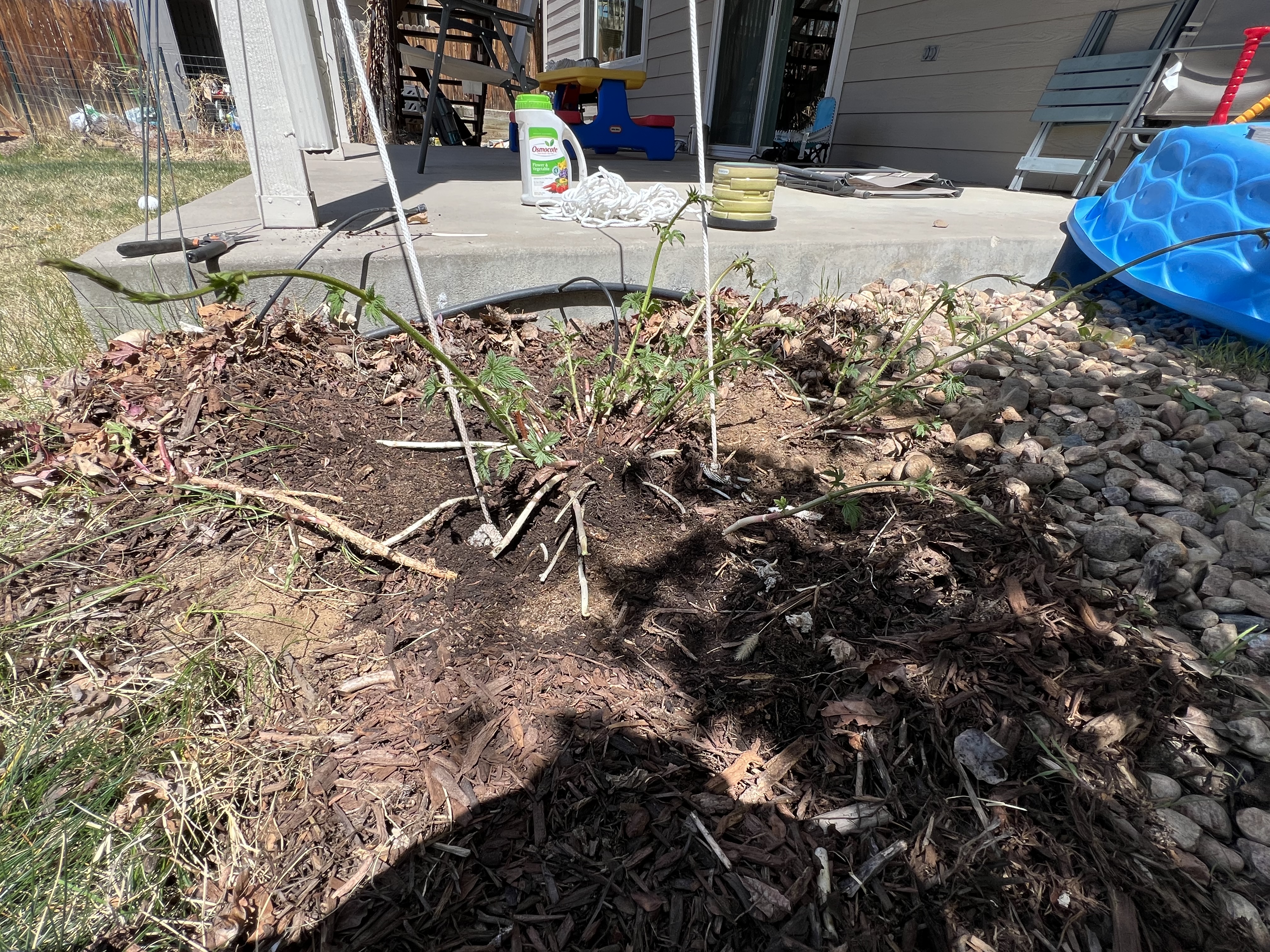 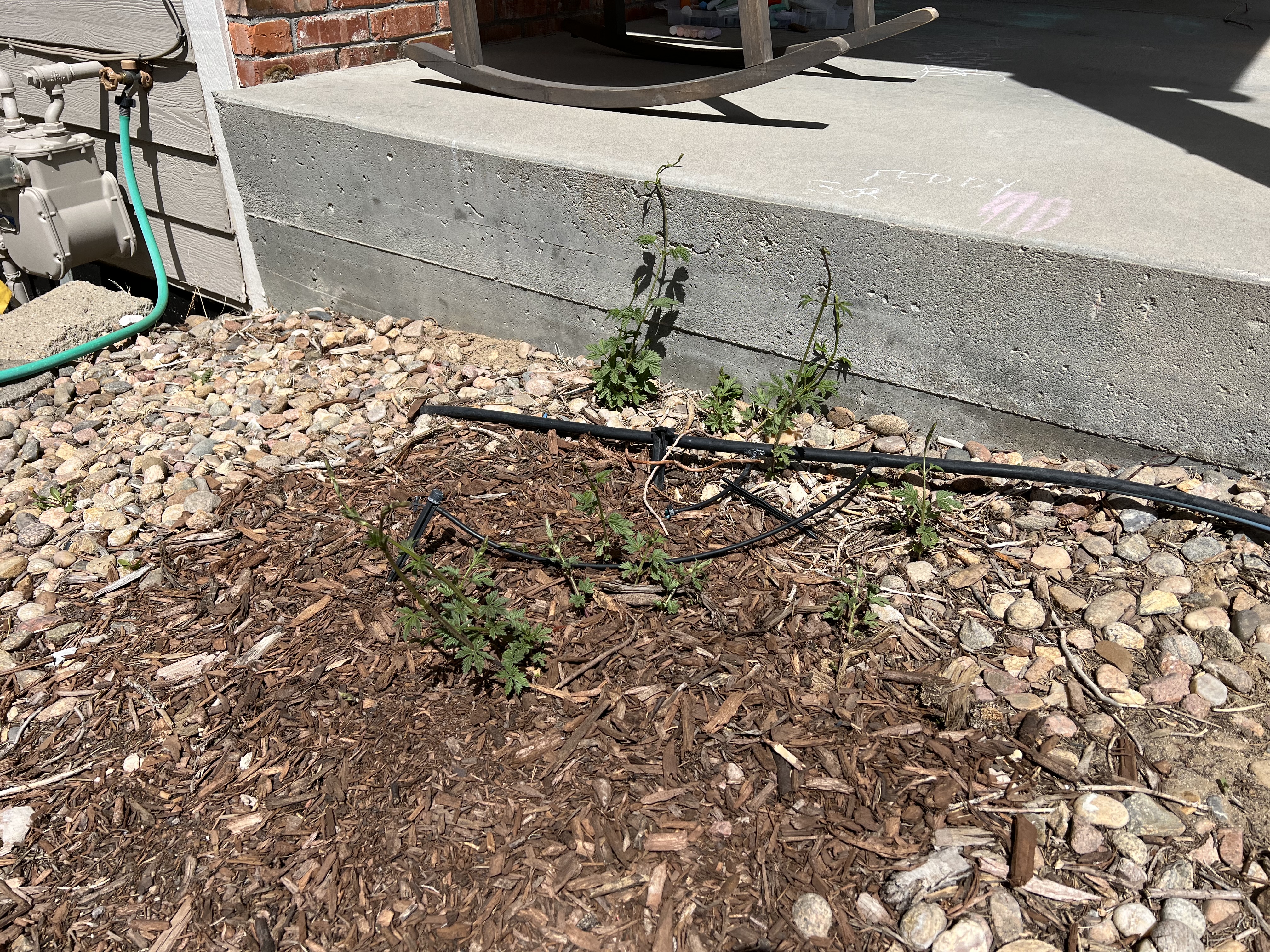 The soil isn't pulled back, but you can see rhizomes have sent shoots a couple feet away from the main crown. Have to hack these off from below to keep them from spreading.
N

my hops came up all over the bed like corn. cut them all back a week or so ago. new ones popped up again everywhere and a few gentle squeezes of each one told me which were hollow.
I just found some bines a few feet long under my deck.
it's crazy how these things grow.

If you haven't already done it, a spading fork or spade works nicely if you basically grab the far end of the 'escaping shoots" by the 'hair', and gently pull while you undermine the rhizome they are attached to and work your way back to the crown (mother plant). That way, you can make sure to lop off the entire thing back to where it's coming off of the crown.

Kaz15 said:
The soil isn't pulled back, but you can see rhizomes have sent shoots a couple feet away from the main crown. Have to hack these off from below to keep them from spreading
Click to expand... 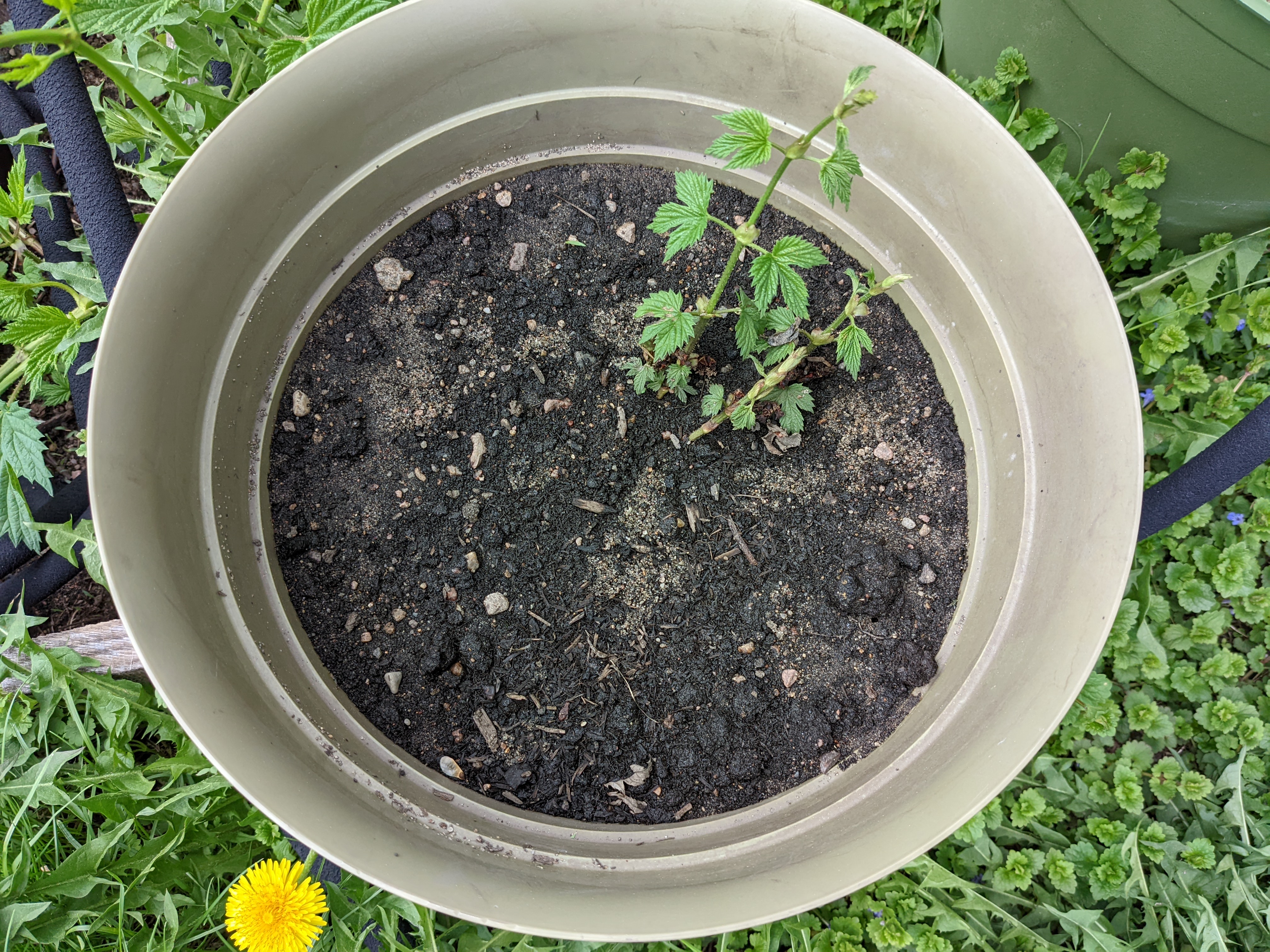 You must log in or register to reply here.

S
Anybody have a plant or rhizomes?

A
What zone does hops grow best in

How many vines to keep per rhizome?