Is there a cheap semi automatic bottling machine?

I have been thinking of getting this bottling machine. It comes with a pump and has 6 heads. It is a really nice machine, but for 2.158 euros?? 140 gallons can be bottled an hours with this baby. Obviously I dont wanna bottle than many...but I wanna do it fast.

Can I get, say, a similar bottling machine from another food industry or from somewhere else that is not more expensive than 500-600 euros?

Any thoughts on this?

UPDATE: you are all asking how much I'd like to bottle. The answer is about 45 gallons. 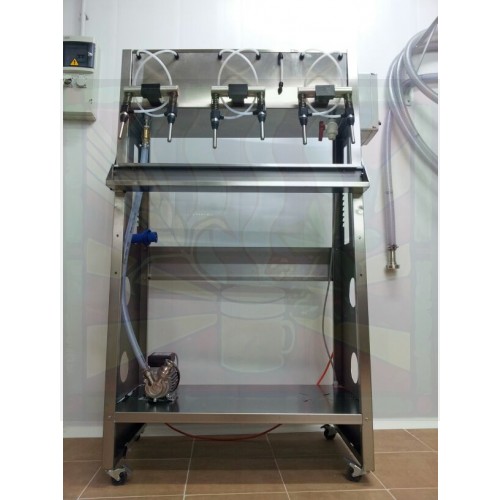 When asked why we don't get a dish washer, my Mom would always reply that she had 4 of them already. You just need more labor.
P

I'm in the office, so don't have access to YouTube. If you search YouTube for Texas Big Beer Brewery - they have a video where they took several of the Morebeer counterpressure fillers and mounted them to a panel. There's also a thread on probrewer.com about the project. Cost much less than 2K euro.
P

Here's a photo from the probrewer thread:

I guess the first thing to ask would be how many gallons do you plan on bottling at a time.

That is the exact question I asked right before I started kegging.
B

I believe that this is the same system:

biertourist said:
3 head filler for 50 Euros; you won't beat that!

I believe that this is the same system:

I can get this here, but it is the good old slow flow system. It is definitely cheap.
B

Elysium said:
I can get this here, but it is the good old slow flow system. It is definitely cheap.
Click to expand...

Yep; not the most sanitary, not lowest oxygen pickup and not the fastest but definitely the cheapest and least effort 3 head available.


Personally I'd look at reverse engineering the Blichmann brew gun if this was for my nano/micro brewery and build a multiple head filler based upon that design. You really want to at LEAST do a single CO2 evaculation before filling and you want the filler to go to the bottom of the bottle to minimize oxygen pickup. -Someone handy and knowledgeable could probably build you one far cheaper than most off-the-shelf options. Counterpressure fillers are just too much effort and too much beer shot into your face to mess with, IMHO.

PapaFoxtrot said:
Here's a photo from the probrewer thread:

That, plus the pneumatic bottle capper (linked back to HBT resident -TH-) are pretty bad ass and could help a bottling brewery get off the ground fairly cheaply.
OP
E

biertourist said:
Personally I'd look at reverse engineering the Blichmann brew gun if this was for my nano/micro brewery and build a multiple head filler based upon that design.
Click to expand...

I really like that beer gun, but I have 2 questions:
1, I will still need to siphon the beer into a bucket with priming sugar, right? Or a beer gun is only used to bottle from kegs?
2, Is there a way to carbonate the beer using that beer siphon? or a similar and cheap system? (by the way, I'd like to bottle unfiltered beer)
O

Elysium said:
I really like that beer gun, but I have 2 questions:
1, I will still need to siphon the beer into a bucket with priming sugar, right?
Click to expand...

Beer guns are designed to bottle from a carbonated keg and purge with CO2 before filling. So, the priming sugar, should you choose to use it, would go in the keg. Since you need CO2 to push the beer anyway, I would artificially carb.

That being said, a single filler followed by a bench capper is an excellent method to speed it up. The concept is to make an assembly line with the least number of movements. With two people well versed in the process, I used to be able to bottle 10 gallons in identical height 12 oz bottles including sanitizing the bottles in about 30-45 minutes (not including boiling the priming sugar and transferring to the bottling bucket).

The entire kit was two bottle sanitizers shoulder width apart on top of two 6 prong bottle trees. This assembly spins so that the six oldest bottles are always adjacent the filling stand.

The capper was mounted to a "runner" of Formica so that the freshly filled bottle was slid to a stop, cap into the magnetic bell, pull and place in case.

One person ran both the filler and capper as it took about the same time to fill a bottle as it did to load the capper, cap and place the capped bottle in the case. The other person was busy sanitizing bottles, clearing filled cases and generally tending to the one doing the filling.

Everything but the capper and the bottle sanitizers was junk fabbed together from my garage. I used to have so much more free time. I sold it to member of my homebrew club back in OK when I moved to kegging.
You must log in or register to reply here.
Share:
Facebook Twitter Reddit Pinterest Tumblr WhatsApp Email Link

What is the most affordable automatic/semiautomatic counter pressure bottle filler?