Is my beer dead? Can it be saved?

Used a extract kit (Wheat beer) with extra can of malt extract. Yeast didn't kick for some reason so added more yeast 6 days ago. At 25 days now all in the primary. 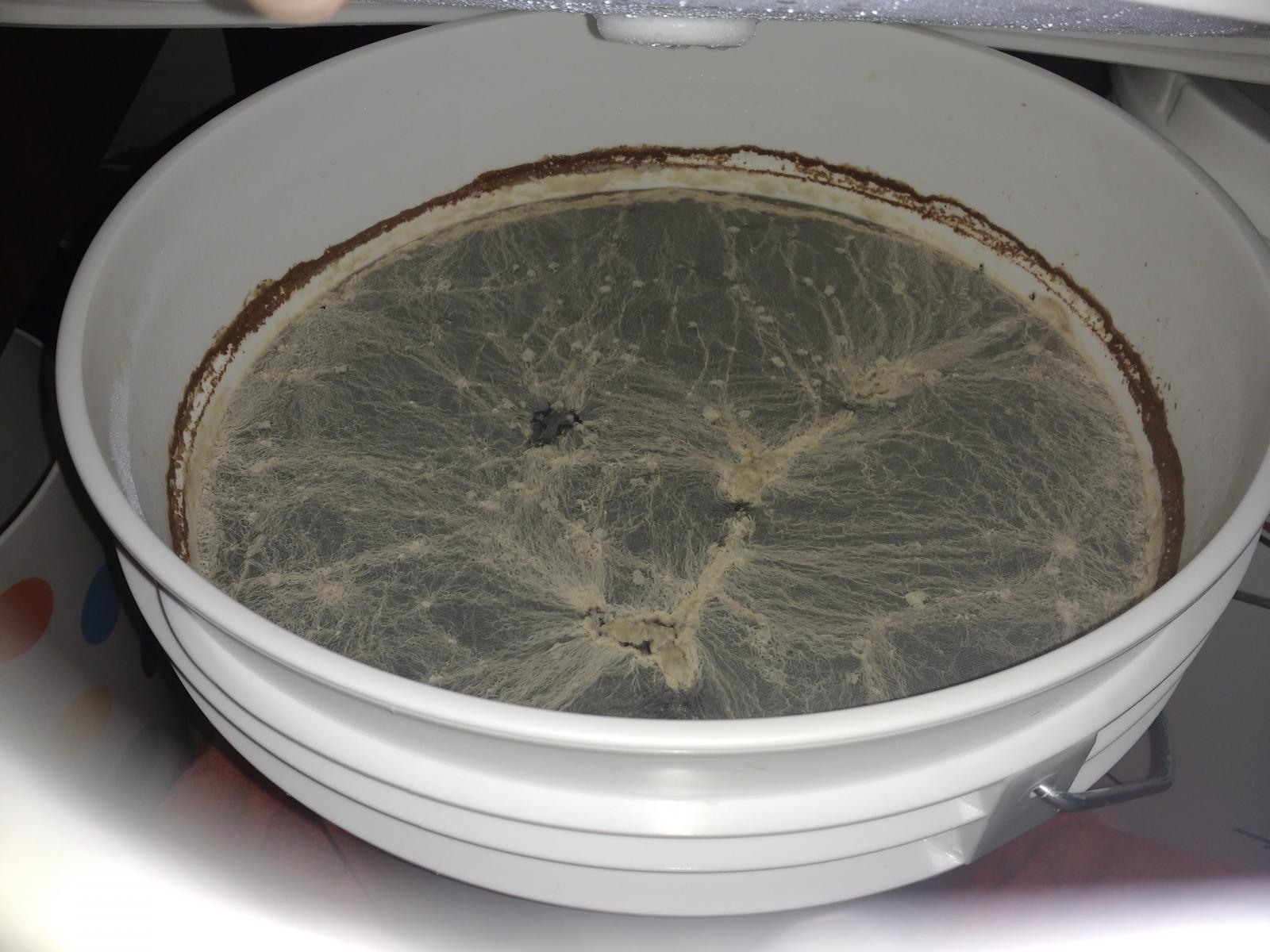 Not dead. It's alive with something.

Hope you were making a sour. What does it smell like? How many times did you open the fermenter?

It's definitely infected with something. I'd probably toss it, because an accidental sour isn't going to be very good.

It's definitely contaminated, but try it. You might like it. It really depends what got in there whether it's drinkable, but remember that a lot of beers were (some still are) wildly fermented.

Also, make sure you THOROUGHLY wash and sanitise every piece of equipment that touches this beer - preferably with multiple sanitisers. Try not to use anything that can't be pulled apart, or replace/boil that item if you do use it (eg. bottling wand).
W

Looks like a pellicle to me. It's probably a bacterial infection, but it could also be some kind of wild yeast.

Although it's possible that you could end up with a good beer with that, the majority of accidental sours don't turn out that great. On one hand, if the recipe is one that is well-suited for a sour (for example, very low IBUs or hoppiness, relatively low alcohol/potential alcohol (if the yeast you pitched didn't ferment before the bugs took hold), little to no late hop additions, etc.), then you might end up with something pleasant-tasting. That said, since the bugs came out of the air, you don't know what's in there. It could be typical sour beer bugs (Lactobacillus, Pediococcus, Brettanomyces), but it could also have enteric bacteria and produce horrible byproducts like butyric acid (which smells like vomit). Likewise, if the environment is not suited for sours (for example: 50 IBUs, lots of flavor and aroma hop additions, and 9% ABV), then you are very unlikely to get something that will work (although it IS still possible, just... unlikely).

If it were me I would replace that primary as well. For what a fermentation bucket costs it's cheap insurance against the bucket infecting your next batch.

CJ-3 said:
If it were me I would replace that primary as well. For what a fermentation bucket costs it's cheap insurance against the bucket infecting your next batch.
Click to expand...

Same here, I'd get rid of the whole bucket. Not worth the risk of messing up another batch. But taste the beer first before you toss it.
OP
B

Thanks for all your input! So I was brave and tasted it... It definitely had a sour taste to it, but wasn't too bad. It was drinkable and didn't have the puke smell. It looked worse than it tasted and once it was in the secondary actually had a nice dark look to it. The IBU's and alcohol content are low (5%) so I might have lucked out. I'll let it settle for a few weeks in a secondary then try it out again. If nothing else, I'll just have to clean my gear and a carboy so no love lost and a good learning process.

Is there a specific way I should store it to help it settle out? I have it sitting in a warmer room (22C/70F) out of direct sunlight.

I thoroughly cleaned my gear, but only had dish washing detergent on had. I'll stop by my home brew store today and pick up some more intense cleaners. Is there a consensus favorite for cleaners or is it personal preference?

I like to use Oxiclean FREE. Make sure it says FREE on it. For my keggle and other stainless items I like to use Bar Keepers Friend.

I too agree with the others and would get another fermenting bucket. Clean this one really well and use it to hold SanStar, or something else. I like to keep a bucket of water near me when I'm brewing outside. I toss the spoon in there when I am not adding any hops or ingredients. I can dip my hands in there to get anything sticky off of them while brewing. So I would use this fermenting bucket for uses like I mentioned above.

M
Is my beer ruined? Can it be saved?

Is my IPA jacked or can it be saved?

M
Can I save my beer?

T
Is my beer dead?