The Errand
McQuillan walked into a bar and ordered martini after martini,each time removing the olives and placing them in a jar.

When the jar was filled with olives and all the drinks consumed,the Irishman started to leave."S'cuse me", said a customer,who was puzzled over what McQuillan had done,"what was that all about?"

"Nothin', said the Irishman,"me wife just sent me out for a jar of olives!"
OP
OP

An Irishman arrived at J.F.K. Airport and wandered around the terminal with tears streaming down his cheeks.

An airline employee asked him if he was already homesick.

"The cork fell out!" said the Irishman..
OP
OP

An Irish priest is driving down to New Yorkand gets stopped for speeding.

The state trooper smells alcohol on the priest's breathand then sees an empty wine bottle on the floor of the car.

He says, "Sir, have you been drinking?"

The trooper says, "Then why do I smell wine?"

The priest looks at the bottle and says,"Good Lord! He's done it again!"
OP
OP

Two Irishmen were sitting in a pub having beerand watching the brothel across the street.

They saw a Baptist minister walk into the brothel,and one of them said,"Aye, 'tis a shame to see a man of the cloth goin' bad."

Then they saw a Rabbi enter the brothel,and the other Irishman said,"Aye, 'tis a shame to see that the Jews are falling' victim to temptation."

Then they saw a Catholic priest enter the brothel,and one of the Irishmen said,"What a terrible pity...one of the girls must be quite ill."

"I just got a new pet toaster!"

An Irishman walks out of a bar and says "What is this a joke?"

Two Irishmen, Patrick & Michael,were adrift in a lifeboat following a dramatic escape from a burning freighter.

While rummaging through the boat's provisions,Patrick stumbled across an old lamp.

Secretly hoping that a genie would appear,he rubbed the lamp vigorously.

To the amazement of Patrick, a genie came forth.

This particular genie, however,stated that he could only deliver one wish,not the standard three.

Without giving much thought to the matter,Patrick blurted out,"Make the entire ocean into Guinness Beer!"

The genie clapped his hands with a deafening crash,and immediately the entire sea turned into the finest brew ever sampled by mortals.

Only the gentle lapping of Guinness on the hull broke the stillness as the two men considered their circumstances.

Michael looked disgustedly at Patrick whose wish had been granted.

After a long, tension-filled moment, he spoke:"Nice going Patrick! Now we're going to have to pee in the boat!
OP
OP

Murphy was staggering home with a pint of booze in his back pocket when he slipped and fell heavily.

Struggling to his feet,he felt something wet running down his leg. "Please Lord," he implored, "let it be blood!!"

"I just got a new pet toaster!"

An Irish man walks into a pub. The bartender asks him, "What'll you have?"

The man says, "Give me three pints of Guinness please." So the bartender brings him three pints and the man proceeds to alternately sip one, then the other, then the third until they're gone. He then orders three more.

The bartender says, "Sir, I know you like them cold. You don't have to order three at a time. I can keep an eye on it and when you get low, I'll bring you a fresh cold one."

The man says, "You don't understand. I have two brothers, one in Australia and one in the States. We made a vow to each other that every Saturday night we'd still drink together. So right now, my brothers have three Guinness Stouts too, and we're drinking together. The bartender thought that was a wonderful tradition.

Every week the man came in and ordered three beers. Then one week he came in and ordered only two. He drank them and then ordered two more. The bartender said to him, "I know what your tradition is, and I'd just like to say that I'm sorry that one of your brothers died."

An Irishman had been drinking at a pub all night.

The bartender finally said that the bar was closing.

So, the Irishman stood up to leave fell flat on his face.

He tried to stand one more time; same result.

He figured he'll crawl outside and get some fresh air and maybe that will sober him up.

Once outside, he stood up and fell on his face again.

So he decided to crawl the four blocks home.

Again, he fell flat on his face.He crawled through the door and into his bedroom.

When he reached his bed he tried one more time to stand up.

This time he managed to pull himself upright,but he quickly fell right into the bed and is sound a sleepas soon as his head hit the pillow.

He was awakened the next morning to his wife standing over him, shouting,"SO YOU'VE BEEN DRINKING AGAIN!"

Putting on an innocent look,and intent on bluffing it out he said,"What makes you say that?"

"The pub just called;you left your wheelchair there again."

I am Irish one day of the year. Complete with boiled dinner tonight.
Normally I am Italian. Growing up in Boston you can't help getting a little Irish

My liver is the only Irish in me. But I enjoy these jokes - and stout - a lot!

Why do Leprechauns laugh when they run?

cus the grass tickles thier nuts!

Can't wait till friday when all the Guinness is on sale.

AND THE BEST FOR LAST

Paddy Murphy staggers into a Catholic Church, enters a confessional booth, sits
down, but says nothing.
The Priest coughs a few times to get his attention, but Paddy
just sits there.
Finally, the Priest pounds three times on the wall.
Paddy mumbles, 'Ain't no use knockin; there's no paper on this side
either.'

Father Murphy walks into a pub in Donegal, and says to the first man he meets, "Do you want to go to heaven?"

The priest said, "Then stand over there against the wall."

Then the priest asked the second man, "Do you want to go to heaven?"

"Certainly, Father," was the man's reply.

"Then stand over there against the wall," said the priest.

Then Father Murphy walked up to O' Toole and said, "Do you want to go to heaven?"

The priest said, "I don't believe this. You mean to tell me that when you die you don't want to go to heaven?"

O 'Toole retorted, "Oh, when I die, yes! I thought you were gettin' a group together to go right now."

Q:Why do the Irish have Whiskey, and the Arabs have oil ? 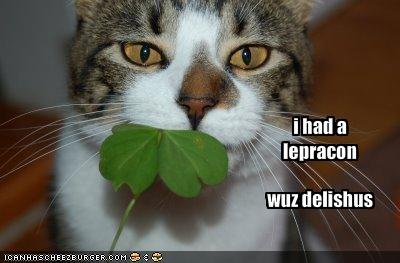 Refreshed for the day.
OP
OP

S-Met said:
Refreshed for the day.
Click to expand...

I totally forgot about this thread!!! 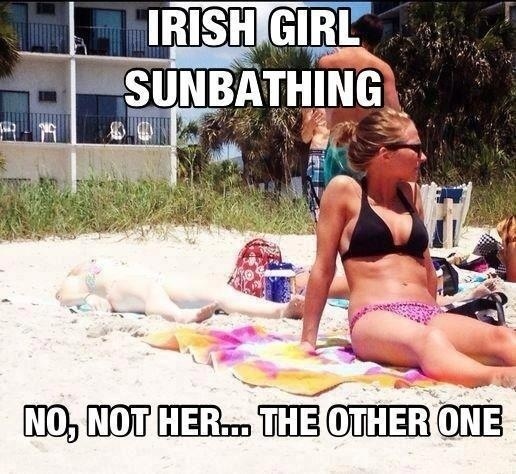 An Irish man goes into a bar and orders seven shots of Tullamore Dew and one Guinness.

The barman lines up shots and goes to get the Guinness.

When he comes back with the pint, all seven shots are gone.

The barman says: “Wow! You sure drank those fast.”

The Irish man explains: "You would drink fast too if you had what I have.”

The barman asks: “What do you have?”

The guy reaches into his pocket and says: “Fifty cents!”
B

An Irishman walks out of a bar.
B

bpgreen said:
An Irishman walks out of a bar.
Click to expand...

On a Dak and rainy day, an Irish man drives through Dublin, desperately looking for a parking spot to park his car.

In his desperation, he starts praying:
"Dear Lord, please guide me to a parking spot and in return I promise you to quit the Guinness!"

Suddenly the clouds open and a bright beam of sunlight shines on a free parking spot.

The Irish man instantly responds:
"Ah, never mind, I just found me one myself."

Paddy sends a text to his wife:
"Mary, I'm having my last pint right now. If I'm not home in 15 minutes, read this again."
OP
OP

An Irish priest is driving along a country road when a police man pulls him over. He immediately smells alcohol on the priest's breath and notices an empty wine bottle in the car.

He says: "Have you been drinking?"

The cop replies: "Then why do I smell wine?"

The priest looks at the bottle and says: "Good Lord! He's done it again!"
OP
OP

I think I had to be partially drunk to appreciate this one.

Mick and Paddy are walking along when Mick falls down a manhole. Paddy shouts down: "What shall I do?" Mick barks back: "Call me an ambulance!"

What's the difference between an Irish Wedding and an Irish Funeral?

Q: How does every Irish joke start?
A: By looking over your shoulder.

Q: Whats the difference between a smart Irish man and a unicorn?
A: Nothing, they're both fictional characters

Q: What do you call a big Irish spider?
A: A Paddy long legs.

Q: What's the difference between Ireland and a tea bag?
A: The tea bag stays in the cup longer.

Q: How do you blind an Irish woman?
A: You put a bottle of scotch in front of her.

Q: What do you call an Irish fella trying to break up a fight?
A: Liam Malone

Q: What do you call an Irishman covered in boils?
A: A leper-chaun.

Q: What do you call two gay Irish men?
A: Patrick Fitzgerald and Gerald Fitzpatrick.

Q: What do you call a Irish man with a piece of glass behind both ears?
A: Paddy O'Doors.

Q: Did you hear about the winner of the Irish beauty contest?
A: Me neither.

Q: What do you call an Irishman in the knockout stages of the World Cup?
A: A Referee.

Q: Why wasn't Jesus born in Ireland?
A: He couldn't find 3 wise men or a virgin.

Q: How can you tell if an Irishman is having a good time?
A: He's Dublin over with laughter!!

Q: Why can't you borrow money from a leprechaun?
A: Cos they're always a little short

Q: What is black and blue and found floating up sidedown in the Irish sea?
A: Someone who's tells a stupid Irish joke

Q: Why did God invent whiskey?
A: So the Irish would never rule the world.

Q: What is Irish diplomacy?
A: It's the ability to tell a man to go to hell. So that he will look forward to making the trip.

Knock Knock
Who's there?
Ireland!
Ireland who?
Ireland you money, if you promise to pay me back
Last edited: Apr 4, 2018
B

Why do the Irish always answer a question with a question?

N
Differences between samples after forced diacetyl test OTHER than diacetyl