Do you want to operate your own microbrewery, but are having space issues? Get a special containerized microbrewery of course.
We bring you an interview with Mr. Ale Jakimov, owner of Mobile Breweries Ltd., a Czech company that produces microbreweries that are a little different and offer an instant set up for new business owners, or stand-alone microbrew houses.
What is a container microbrewery?
A mobile container microbrewery is a full-featured technology for the production of the Czech type beer (and other beers), built-inside a shipping container (conex) instead of the solid building.

Why would someone install a container brewery instead of the classic microbrewery in a business?
Not every operator of restaurants, pubs or even hotel or beer bath is the owner of the building in which operates the service. If the operator does not own the building, they usually do not want to conduct the extensive reconstruction required for a good-scale brewing operation. In addition, this would be an investment in the property of another owner, which is fraught with problems on one hand, as well as financial (it can be difficult to get credit or leasing for a project with such conditions), and ultimately human problems.
In case of worsening of relations with the owner of the building, it would be very expensive to remove and transport everything away, and the property owner would certainly demand that the building be converted quickly to its original state. A mobile brewery operator in this case can simply disconnect the water, sanitation and electricity connection and truck the mobile brewery to different place, or to a standalone location where he can immediately start with brewing his own beer again.
Moreover, it is a movable estate owned by operator, which positioning on the leased land does not become an integral part of the property of the property owner and is therefore not necessary to treat complex legal property relations. 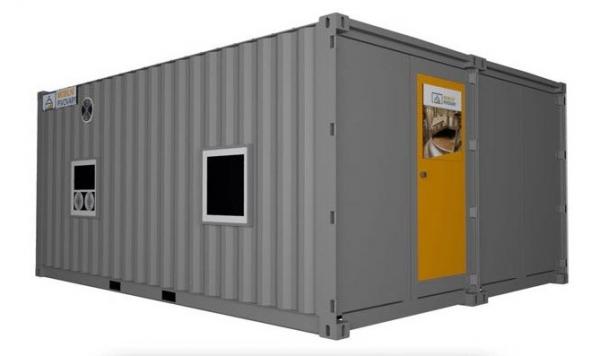 Conversely, in the restaurant, we can build-in the Brew house for customers to see it, and outside in the refrigerated container fully equipped brewery cellar, which also can be expanded at any time on extra container until its capacity will be insufficient. You have no place in the brewery restaurant and free space on your property too. Build a mobile microbrewery on other land nearby, or perhaps on your own garden. If the business ceases to thrive and did not sell as much beer as before-- then simply keep the first container and the other can be taken by another bidder to simply decrease production. In addition, what about when you run the business in the summer by the water and in the winter you are moving to another place that offers the service catering to skiers and winter vacationers? Simply in the summer you will brew beer here and in the winter elsewhere, or the entire brewery can be lease to another operator in the mountains. Everything is just a matter of entrepreneurship operator and his inclination to think, seek opportunities and implement them.
When you order a brewery, what you need to have ready? Just the connections for the water and electricity? 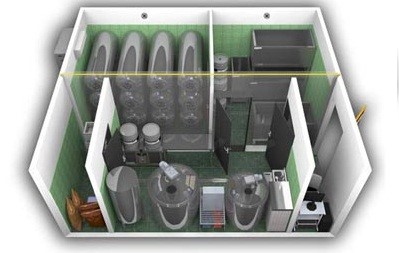 Basically you need location for the brewery (ideally a concrete surface that container do not stood directly on the ground) with a connection to good drinking water, access to drain or sewage treatment plant (optionally connection with a hose to pump liquid waste) and connection to the power source. MOBBEER microbreweries are equipped to request with their own water meter and electricity consumption meter, there is no problem of consumption accounting separately. Then, of course, is the need to ensure legal operating conditions, which include building permit, permit from the local ABC or Health departments and tax obligations.

How much beer can be produced annually in the container brewery?
Mobile container microbreweries MOBBEER is available in many different configurations. You can choose from four brew house sizes and several cellars capacity. Measured in the field with conventional numbers the performance of our microbreweries is ranging from 460 up to 1900 hectoliters per year for standard models. For easier understanding, it is from 150-3600 liters of beer per week. Nevertheless, it is not a problem to produce mobile microbrewery MOBBEER with smaller production, or even several times larger than is the standard offer. Capacity of microbrewery MOBBEER can be easily increased by adding more microbrewery containers or built-in modules. So can practically everyone interested in its own microbrewery can start his own business, because economically the best and safe solution is to start with a small investment and let the small microbrewery to make money for larger one.
We saw on your website a diagram with temperatures for individual parts. Do you count with production of top-fermented beers or operation is modified only for lagers?
Refrigerated container blocks of microbrewery MOBBEER are equipped with dual-circuit cooling unit, which cools the two parallel spaces on two set temperatures. Each of the two temperatures can be freely adjusted between 1-17 C. It is up to the operator what temperatures he will set and what procedure he chooses to brew beer. The standard offer is based on the tradition of Czech microbreweries and chilled block uses the open vessels for beer fermentation in the fermentation room and lager tanks, both spatially refrigerated by cold air. This solution saves space and money of the customer. On request, its possible to manufacture a chilled block with cylindroconical tanks or double jacket open fermentation vats and lager tanks cooled with duplicators.
What about operating costs compared with site-built microbrewery?
Mobile microbreweries MOBBEER have prices comparable or often much lower than the quotations of suppliers who offers built-in microbreweries. Price of brewing technology is increased of the cost of specially made container. In contrast, the serial production of standardized products produced in an environment of well-equipped workshop using pre-made products; reduce production costs and therefore selling price microbrewery in comparison with individual contract of built-in microbrewery. For each built-in microbrewery must be paid a new project, make time and cost consuming rebuilding of the building or built up a new object. Investors interested in a classic site-built microbrewery have to worry about building permits, property owners, neighbors, Health department etc.
To sum up - if you do not have all construction and legislative steps prepared in advance for the microbrewery, the mobile container microbrewery MOBBEER will come always significantly cheaper, without mention the saved time and worry. Even those interested in a site built brewery we have something to offer, because of our technology microbrewery type BREWORX we also offer the option for solid installation in the building. Alternatively, you can combine technology built-in microbreweries BREWORX with mobile modules like MOBBEER, as I have said. On the other hand, initially operated microbrewery MOBBEER can later be removed from the container and installed securely inside the restaurant, where the operator is finally satisfied that his investment in the brewery is paid.
Is this design technology all yours or are you importing it?
Czech workers with long experiences and specialization in brewing equipment manufacture all the technology of our microbrewery MOBBEER and BREWORX in Czech Republic. Czech breweries have at home and worldwide good reputation. We are currently the only company in the world with serial production of microbreweries in containers.
For more information on these breweries, and the interesting concepts behind them check out Czech Mini Breweries

The concept is excellent - other companies also offer these. But the gallery appears to contain pictures of large scale breweries with equipment shown mounted on foundations or between floors, and all the container pictures appear to be conceptual. The portfolio has conceptual designs but does not reference real contain projects. Do you have pictures of container breweries that you have built and does your website have a list of container customers and pictures of those completed projects and references?
Base conceptual container brewery that makes up to 90 barrels per year seems pretty expensive, but depending on the quality then maybe that is OK.
The notion that Czech beer can only be made with a Czech brewing system seems far fetched - does that mean that your brew system cannot make Belgian beer or IPAs?
I'm not sold on the whole "there's less legal requirements" simply because it's some shipping container. That may be true in whatever country this container came from, but I really doubt that's true in Alabama, Washington, Idaho or any other state. If there's one thing Americans do well, it's generate complex alcohol rules.
There is something seriously flawed with the composition of this article. The conceptual diagrams are silly and the fish eye photo of the forklift holding a "mobile brewery" in the air is absurd.
Cool concept! Looks like a Breaking Bad could use this as a mobile meth lab!
@Brewfist I suppose you don't think there's a tooth fairly either.
@Nightstrife Lol. I was thinking the exact same thing. Totally reminded me of Mr. White.
It' a great concept, but the market of craft beers requires from a company to usually kick in with several kinds and types of a beer brand in order to get the product in to the pubs and stores and start making it a business. Might be a problem, but maybe it's a market characteristic that's just local.
I'd love to know how it is in your cases? Don't you think that with this thing you can produce mostly one kind of beer and it's an obstacle? How grave is it?
I imagine living in Texas (yeah, Breaking Bad vibe) and making a single, hit kind of beer, then buildinig a business out of it, after a lot of time
You must log in or register to reply here.
Share:
Facebook Twitter Reddit Pinterest Tumblr WhatsApp Email Link