So the old 2 tap straight round tower had served me well for years, but when I realized I could cram 3 cornys into my kegerator (A Haier HBF05EBSS), it was obvious I needed 3 taps. There's three ways to do this:
1. Drill a hole in the existing tower and add a third shank. Cheapest option and best of luck to you with getting everything lined up and square / plumb while still having room to work all the taps and not have it look goofy.
2. Purchase one of the adapters that add a ring above your tower (where the cap would be) and add the third faucet there. Mid-price option, might handle the spacing OK, but I think it would look a little cheap and goofy, and wasn't what I was going for.
3. Buy a new tower. This is what I did.
So what tower to get? To each their own, but I opted to go for a T-Tower because I liked the look, the nice spacing of all the taps, the clean lines and presentation, and the relative ease of setup and maintenance. After a short search, I stumbled upon American Coffee Urn Manufacturing Co., Inc. This is a small custom sheet metal shop that will make whatever you want, to order. Best of all, they have T-Towers and drip trays as part of their standard line up, and their prices are killer.
I chatted with the owner a bit prior to ordering and outlined what I wanted - he said he could custom make it for me, but he had one that was almost identical on his shelf, ready to ship - cheaper and faster. Sold! He sent over the drawings (as an Engineer, I loved that) and I placed my order - $139.68 plus shipping (just under $20 CA to MD). 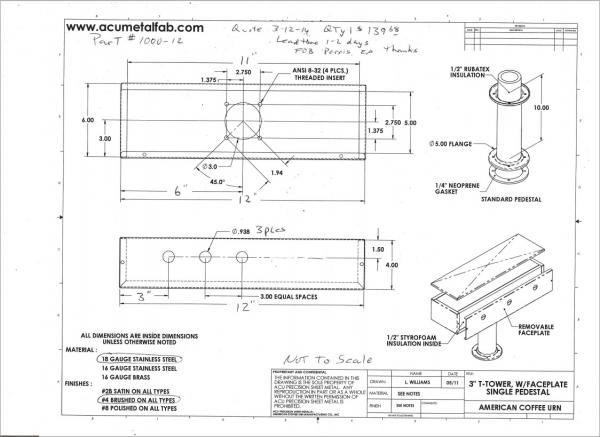 Shortly after placing the order, a well-packaged box showed up at my house. The parts were wrapped in plastic wrapped and packed in a surplus of Styrofoam packing peanuts and Styrofoam sheets. 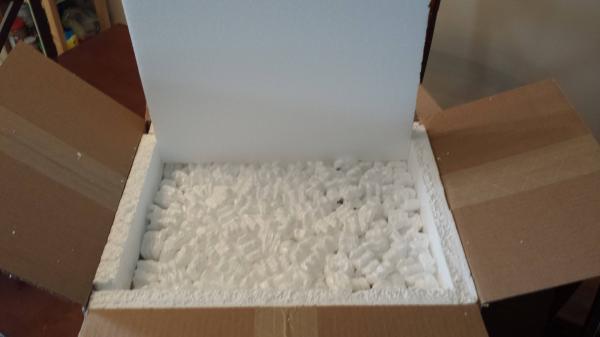 Contained within was the base and the top. You don't get any shanks, you don't get any hardware, but that wasn't a big deal to me because I already had most all of it. The faceplate on this model is removable with a few screws, which made setting it up quite easy. The first step for me, after assembling the base to the T top (4 screws, provided, very easy) was to determine if my taps would be mounted to flanges, or directly to the tower. 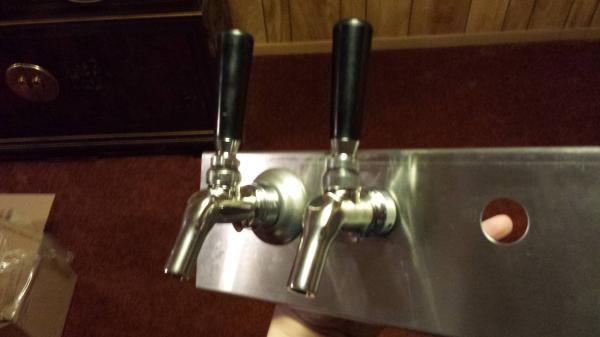 Depending on the size of your tower, the size and shape of your tap handles, and how you want things set up, you may opt to go with one option or the other. Because I had kegerator with some holes already drilled in it (that I wanted to reuse), I opted to mount the taps directly to the face, without the flanges. After plumbing it up, I used some of the Styrofoam sheets from the box to insulate the tower and reduce the 'free' volume. I should note that the tower comes pre-insulated with a thin sheet of Styrofoam and the tower portion comes pre-insulated with a hefty chunk of black piping insulation. 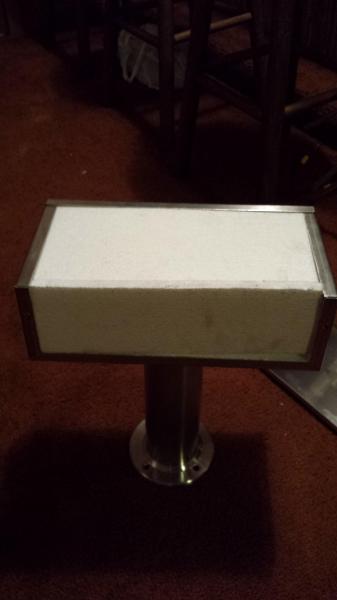 I decided, however, that a simple tap tower wasn't enough. After doing some research and sourcing the right part, I bought a 120mm LED angel eye / halo / ring / cat eye from Amazon.
You can't tell from the photo (and I couldn't get a good photo of it) but the LEDs are installed in sets of 3. I asked around, and no one thought it'd be a good idea to cut a slit in one of these, but that was the only way to get it on the tower. So I picked the set of 3 LEDs furthest from the wire lead and used a dremel to slice that side in half. I then drilled a small hole in the base of the T / top of the tower, right where the wire lead would be, at the front. Why the front? Unfortunately, by slicing the ring, the 3 LED section you cut won't work, so I figured best to have that at the back. Maybe you'll luck out and cut it in some way that doesn't kill the set, but it was a small price to pay.
When it came time to mount it, I did so in two steps. The first step was to apply a thin coat of silicon across the back of the ring and let it dry. The LEDs on this are soldered through the ring and there are bare solder connections around the ring on the back side. This is the side that will be up against the stainless tower, and shorting out the ring just didn't seem like a good idea. After the silicon had dried, I applied another ring and used that to adhere the ring to the base of the T. Run some wire through your kegerator (a small hole) and up into the tower and hook it up. Then connect it to your favorite 12v source (buy one, find an old wall-wart to splice into... plenty of options) and you've got yourself an LED illuminated tower! 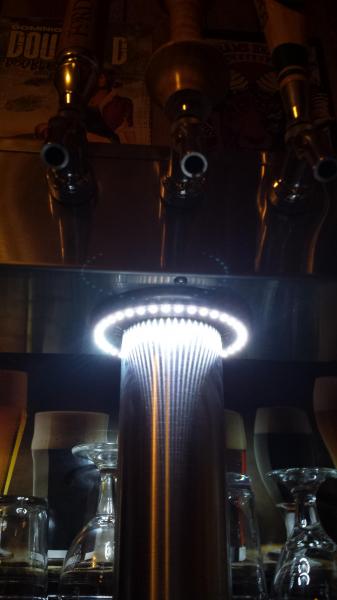 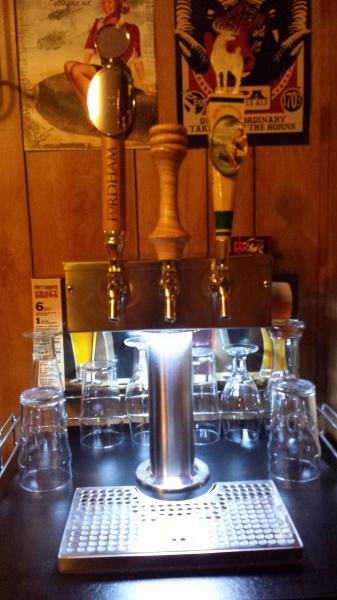 Now that could be enough if that's where you wanted to stop, but then your LEDs are on all the time, wasting power, keeping the dogs up at night, and attracting neighbors to your beer like moths to a flame. Sure, a switch would work, but I need two hands to work the taps and hold the glasses. Enter the 12V PIR motion detector, again from Amazon. You might be able to cobble one together with individual components for cheaper, but I went with the full package. After about 2 weeks shipping from China, I had an easy answer to my problem. Wire this bad boy in-line, mount it to the wall behind your kegerator, and you're golden. I set the sensitivity to one of the lowest settings, and the PIR is still sensitive to pick up my small dogs running down the stairs into the basement some 10-15' away. Now whenever I go downstairs, the kegerator lights up, beckoning me to come take a sip! 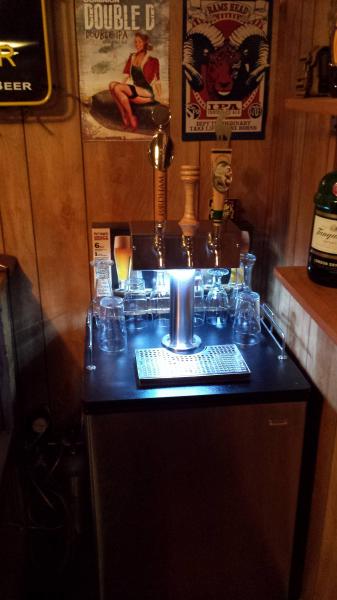 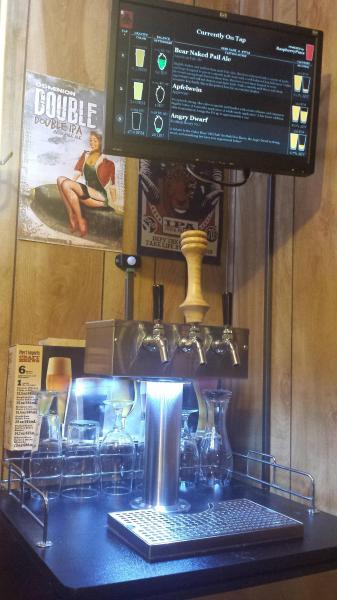 I also added a run of LEDs (some left over tape LEDs from another project) to the underside of my bar - the PIR has plenty of power to control them, and I figured why not.
The sexy TV monitor tap list was actually conceived, designed, developed, and put into 'production' by the great folks on this board. It's a DIY project, and fairly simple to build, but gives you an awesome product. Check out the thread and the website.
So for everyone thinking about upgrading your setup and going for something a little different - for not a lot of money you can definitely 'pimp' your bar! 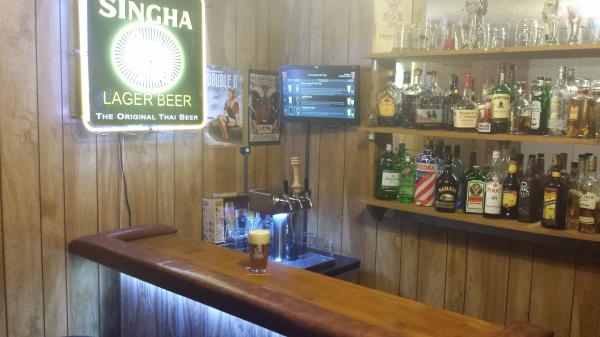 Great write up, and nice job!
Also, somebody likes Fordham/Old Dominion! I live just outside Dover, DE. Been on the plant tour a few times.
I do some work for them on the side at events. They're great people and make damn fine beer.
Outstanding! I'm already plotting a way to incoporate this into my tower.
@BadNewsBrewery
Very Nice Build !
Cheers
I am impressed!
Nice build Kevin but what I'm really looking at is your menu screen on the wall. How did you set that up?
Thanks!
Might I direct you to the second-to-last paragraph, which links directly to the HBT forum that discusses the tap list, and a second link which takes you to the website set up by the members that made it. All the information you seek can be found there.
@BadNewsBrewery
Thank you my friend!
You must log in or register to reply here.
Share:
Facebook Twitter Reddit Pinterest Tumblr WhatsApp Email Link

May 3, 2015
malboa
M
A
National Homebrew Day! We Celebrate the History and Culture of Homebrewing in America