My current kegging setup is a 25lb tank outside the fridge, regulator, hose through bulkhead into fridge, then a 3-way manifold. Fridge maintains about 37F.

I have three taps. One is dedicated to sparkling water (seltzer). Another is always pouring some kind of porter. The third is the "guest" tap: APA, IPA, Brown, Amber, Wheat, Rye, ESB, etc.

Here is the problem: I keep my regulator set to about 9 psi to maintain the porter keg at a constant CO2 volume of 2.2-2.4. The pressure is just fine for serving everything, but lacks for force-carbonating power for lighter ales (APA and IPA, in particular). I could keep the water keg at 30PSI easily, and the "guest" tap would be better off in the 12-14 psi range.

Here is the question: Would it work to set my primary regulator to 14 psi, then put this variable 0-10 psi propane regulator between the manifold and keg for just my porter tap?

My theory is this secondary (tertiary?) regulator could keep a constant 6-10 PSI on the porter tap while allowing me to carb-to-style on the other two taps. 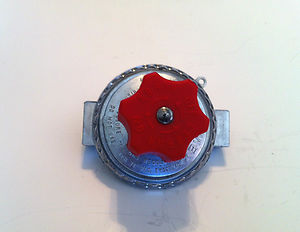