I love proper NEIPA's, but I generally don't like drinking strong (7-8% ish) beers. I much rather have a couple of pints of a more sessionable ~5% beer since I tend to get headaches quite easily from drinking. I've been brewing a few of those, but haven't been quite satisfied, they've always felt lacking compared to the stronger ones, although appearance has been spot on.

The previous batches have always turned out "fine", but the most prominent issue has been that they've lacked body and malt character, the taste kinda falls flat even though there's a descent amount of hops coming through. Appearance has been great though.

This time I settled for a hop combo of Citra (cryo), Idaho7 (cryo) and Galaxy, mainly because I had the Galaxy in stock and the two others were the only cryo variants I could get hold of. I also decided to double dry-hop, some of my batches have been single dry hop. For yeast I used a single pack of A38, didn't make a starter. For the malt I did the same 2-row, wheat and flaked oats as before, but this time I decided to throw in some toasted oats as well, hoping this would create a more complex malt base (I got this: Small Batch Speciality Malt; No 4 Toasted Malted Oats | Crisp Malt ). And I think this is what paid off and made this a great session hazy. I was honestly a bit scared during mash in, because the toasted oats were really prominent both in smell and taste.

When tasting the final beer now though (8 days since kegging), I don't really find the toasty oat taste in the finished beer, just a nice rounded malt backbone behind the hop flavors, and a good slightly creamy mouthfeel. This is definitely a beer I will brew again, and make no changes to the recipe, which is rare for me.

Perhaps the use of toasted oats or similar in a beer like this is old news for some of you, but somehow it had eluded me until I read about it somewhere else (pretty sure it wasn't this forum), so I thought to share.

If someone wants to have a closer look, here's the recipe: https://share.brewfather.app/rdwsZBTJVBQZEK

And here's the mandatory picture: 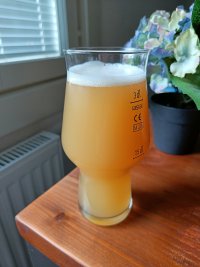 Looks good! I have been using the golden naked oats in my NEIPA for awhile now and really like it. I may need to check out this new offering.

Golden naked oats are the ****! I put them in everything now, style be damned! I first tried them in a beer I tried in Wellington, NZ. It blew me away and I realised that this is what I had been missing from my grist.

I brewed the "Rings of Light" New England Pale Ale from the internet, which is similar to what the OP brewed, once with just generic oat malt, and the second time with Golden Naked Oats. The second time it was exactly the thing for mouth feel and maltiness.

I have used Golden Naked Oats and the one thing that bites is the width of the malt color. It ranges from 12 to 24 ebc (roughly 6 to 12 SRM) which is way too dark for many of the beers I brew these days. I tend to prefer flaked oats as most of them end up in an neipa - which decidedly wants to be as light as possible...

@day_trippr this Crisp product linked in the OP I used is lighter, 7-8 EBC according to the homebrew store I bought it from. And I think the color of this beer is on point, always hard to capture it on camera though.
C

That sounds great! But 5% isn't really a "session" beer.

Congrats on the lowish ABV Hazy. I have had some that have to be low due to laws and haven’t been super impressed. Alcohol bitterness is a thing and as you note a strong malt backbone balances the copious hops. Though in a NEIPA, I think that is subtle due to the light colored malt. To me it’s the lack of alcohol that unbalances an assertively hopped beer. To come up with a good combo in a lower ABV hazy is quite an achievement!
D

It's relative I guess, but 5% is pretty sessionable to me! And I feel like "proper hazies are usually >6% at around here.

spittiz said:
It's relative I guess, but 5% is pretty sessionable to me! And I feel like "proper hazies are usually >6% at around here.
Click to expand...

Around me in the US, most of them are in the 7% to 8% range...and you don't have to look very far to find them in the 10% or above range! I agree that 5% is a fairly sessionable beer. I also like the term Hazy Pale Ale, but a web search turns up a lot of hits for the term "Session NEIPA".
T

Tons of errands with hopes hitting Silvaticus Oktoberfest and a full dinner Karls sausage. It was a sausage fest

Hit the cellar to pick up my pre order and talked with the asst brewer for a while. At least 20 minutes on Brett They're good people and couldn't thank me enough for the case of bottles bought. Gave me a tour of each barrel and stuff out back. Gave me access to the big ass quad on the right that hadn't been released

OT: after the drive on the highway? 90° and humid #StoutSeason. I'd Silvaticus' but they're all warm

Oh and this year's anniv stein