I've always wondered how many viable yeast cells there actually are in an 11.5g sachet of yeast (SafAle US-05 in this case). I am soon getting access to some basic lab equipment so I was hoping to learn how one would go about taking a cell count of a fresh, unused packet or brick of yeast.
Would I need to make a starter and take a sample from the resulting slurry or could I simply rehydrate with distilled water (using the packet recommendation of 1:10 yeast/water ratio?) and take a sample from there for the hemocytometer? Also, will methylene blue effectively stain a first generation batch of yeast cells (I've read cell walls may be thicker in first gen)?
Any information would be much appreciated! Cheers

You go to the spec sheet for the yeast you are using and look. 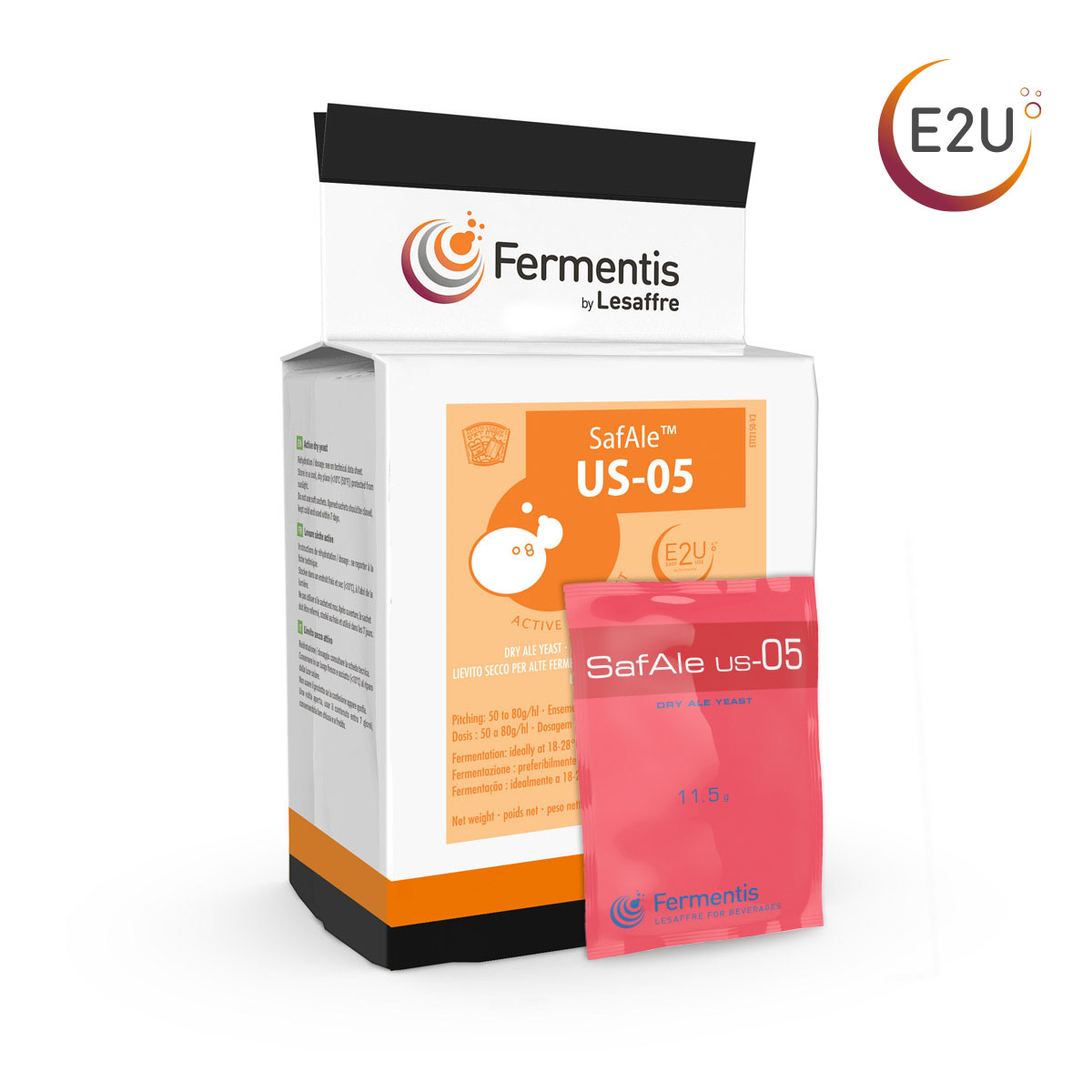 Fermentis SafAle US-05 beer yeast is ideal to brew neutral and well-balanced ales, clean and crispy US beers, but it can also suit other beer styles.

11 gram pack you say? Then multiply that number of viable yeast by 11. It's a big number of cells.

It's printed on your packet too. But I recently inquired of Fermentis about a slight difference in temp range specified for US-05 on their packets as opposed to on their website.

They said that the characteristics of a yeast strain can sometimes change a little over time and they are constantly testing to see what is what with each. They say you should use their website data for the most accurate.

They got caught with a lot of sachets pre-printed with old information in inventory and plan to use them up first. But even if you follow the old specs, they say there isn't that much difference and you'll still have great beer.

hotbeer said:
You go to the spec sheet for the yeast you are using and look.
Click to expand...

But then they wouldn't get to use the shiny new toys, I mean equipment.
K

The homebrewer/yeast manufacturer relationship is trust, but verify.

I don’t know the answer but I hope you get one and you report back. Yeast cells and viable yeast cells are two very different things.
Last edited by a moderator: Apr 5, 2022

If you are using dry yeast and you are a home brewer doing 10 gallon or less batches, then why go to the trouble of making a starter? Like I said, they tell you how many viable cells you get per gram of dry yeast.

By it's nature, dry yeast will be more consistent across it's storage life for the figure they give you. Liquid yeast is the one you should be more concerned about counts, though most just use their experience with previous use and might over pitch just to be sure.

Just direct pitch dry yeast in the wort and you won't even have to oxygenate the wort. But remember that's only for it's first use as dry. If you use dry yeast and harvested yeast from one batch for your next batch, then you now go with the liquid yeast procedures for re-use.

If making starter is part of the fun for you then do it. But simplify your brew day and trust their data. If counting cells is even more fun for you and you want to actually count your yeast cells then you need a hemocytometer. There are those that like that level of lab work in their beer brewing. And it's fine if that is you.

There was a thread somewhere recently about someone that got an old microscope to do this with.
Last edited: Apr 5, 2022

... and I held their beer while the kat watched.


kidneythief said:
Any information would be much appreciated!
Click to expand...

I don't have a microscope or an hemocytometer. And I don't know how much web searching you have already done.

Cell counts for dry yeast is an occasional, and reoccurring, idea in home brewing forums.

Have you done some site specific searches (HomeBrewTalk, /r/homebrewing, ...) to find discussion on this idea? I found that including hemocytometer in the search lead to some useful discussion.

Also, are you aware of this (braukaiser link) and this (woodlandbrew link)?
Last edited: Apr 5, 2022

There has been lots of debate about how much weight to put into that ">" sign. It has been pretty commonly said that a pack of dry yeast has around 200B cells, and I have heard rumors of tests showing that to be true. Does a Fermentis pack really have "only" 115B cells? Is it the same across all yeast strains? I would be interesting in some trials to verify this.

The Brewer's Friend yeast pitch rate calculator has several notes on yeast counts for dry yeast. It is not very conclusive. Some of the links are dead and some of the referenced data does not seem to match up with what manufacturers are currently reporting. There is one table of a study showing cell counts from 8 to 18 B cells per gram.

Hi all! Thank you for all the replies!
Haha, as DBHomebrew said, it would mostly be a shame not to play around with the new lab equipment

You're right hotbeer, we've never had any problems pitching directly, even for bigger batches. For those bigger batches though when pitching fresh dry (is that an oxymoron?) yeast, I share CascadesBrewer's concerns of maybe having the actual count fall anywhere between 200B and 115B which could mean severely underpitching or overpitching.
I've read through some resources on yeast counting but many describe procedures specifically for measuring slurries when repitching (which I am hoping to start doing as well with proper yeast counts!).
There's also just a bit of a curious itch I'd like to scratch as I've come across the old threads with those debates on dry yeast cell counts based on Fermentis vs Mr. Malty vs. some other yeast calculators. I've actually gotten in touch with a Fermentis rep who I think may be able to help! The equipment is not coming in until later this month but I hope I can successfully do a test and get back to you guys with some useful data
OP
OP
K

BrewnWKopperKat said:
Also, are you aware of this (braukaiser link) and this (woodlandbrew link)?
Click to expand...

Thank you, these are great! Haha a lot of the hard science went over my head but I've already learned some new things from the Woodland Brew lab tests.
OP
OP
K

Hi, I am going to repost a thread I started at theelectricbrewery.com, just to get some more feedback. (I'm not sure how many people use the other forum.)... I've been thinking about dry yeast lately, and I've been using the mrmalty.com calculator to determine pitch rates for liquid and dry...

www.homebrewtalk.com
I guess I didn't search the forums hard enough but there are some useful insights in the links shared on this 2014 thread! The links are from 2011 but they posit that if stored correctly and rehydrated properly (in warm water, not wort), you can get close to 100% of the 20B/g viable cells (taking into account viability loss over time). Both claim that test results showed a drastic reduction in viability (up to 60% less) when dry yeast was rehydrated in wort. If the claim is true, this figure kind of aligns with the 7-8B cells/g minimum guarantee given by Fermentis, as this number accommodates the supposed losses from pitching directly in cooled wort without rehydrating, adding yeast nutrients, oxygenating, etc.
For my purposes, their experiments give me my first lead of perhaps testing a fresh packet with a sample made by rehydrating in 100F water at a 1:100 ratio for 30min to an hour.
I'll keep reading and hopefully learn enough to perform similar tests with some degree of accuracy.

... and I held their beer while the kat watched.

Active dry yeast is a manufactured product (so is liquid yeast) so it will be interesting to see what has changed in the last 10 years.


kidneythief said:
perhaps testing a fresh packet with a sample made by rehydrating in 100F water at a 1:100 ratio for 30min to an hour.
Click to expand...

As you test, can you also try the process(es) that the dry yeast provider recommends?
N

kidneythief said:
The links are from 2011 but they posit that if stored correctly and rehydrated properly (in warm water, not wort), you can get close to 100% of the 20B/g viable cells (taking into account viability loss over time). Both claim that test results showed a drastic reduction in viability (up to 60% less) when dry yeast was rehydrated in wort.
Click to expand...

Fermentis has done more testing and is now confident that their E2U yeasts (pretty much all their standard dry yeasts) can be rehydrated in water or wort, or pitched dry. You can see some of this in their Tips & Tricks section. As far as their cells per gram numbers, there's a lot of disagreement. Maybe they will make that a testing priority next.

another good thing about looking at the yeast is to spot stuff like this sharing the space...i think? 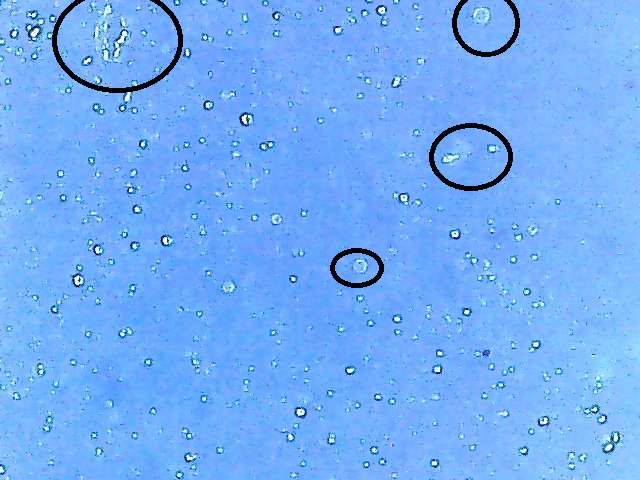 (besides the coolness factor of fun toys anyway!

bracconiere said:
another good thing about looking at the yeast is to spot stuff like this sharing the space...i think?
Click to expand...

"Your yeast has cancer. Sorry."

day_trippr said:
"Your yeast has cancer. Sorry."
Click to expand...

9 cells out of all that? i'd be curious you've ever gotten curious enough to look at a starter? just fermented with aluminum foil hat....

Oh hell's no! I'm not going to get freaked out at the microbial level on purpose
D

bracconiere said:
another good thing about looking at the yeast is to spot stuff like this sharing the space...i think?


(besides the coolness factor of fun toys anyway!

I'm not sure about the little white blobs but I'm very worried about the big black circles and ovals, they are an order of magnitude bigger.

How Many Cells in a Yeast Slurry. Anyone Use This Method?

Attenuation low. What is everyone doing to get good attenuation?